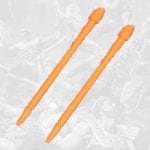 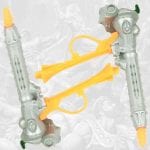 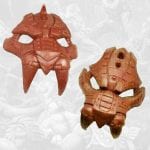 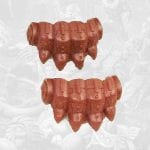 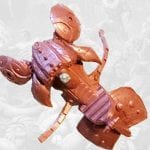 Battle Cat creature from the Masters of the Universe 200x Modern Series. Battle Cat did not speak in the animated series. The tiger did display nobility by courageously standing by He-Man and was his main method of transportation. Battle Cat could run very fast across the plains of Eternia, jump great distances, and leap on the backs of Sandworms. Battle Cat was able to recall his and Adam’s youth, and he also helped rescue Queen Marlena. 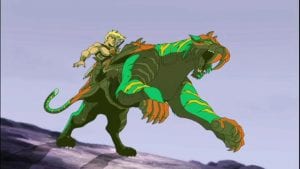 According to the Wiki Grayskull, the 2002 relaunch of Masters of the Universe, Battle Cat was redesigned with bulkier shoulders and sabre-like fangs, making him more distinct from his Cringer form. Cringer is somewhat of a pet to Adam. Although it seems clear he can understand what is said to him, he cannot speak and sounds like a typical house cat. He is a coward, although this does not come up as much as in the original series, but more than once he has shown some bravery in order to help Adam. As Battle Cat, he is most often seen merely transporting He-Man and roaring loudly. In the first season of the 2002 animated series he only has a few fight scenes, going one-on-one with Panthor, helping against Evilseed’s vines, fighting giant mutated rats, taking out Clawful and fighting a powered up Tri-Klops.

In season 2 the writers gave him a more active role; he often fights against the Snake Men (he nearly kills Kobra Khan) and Skeletor’s forces. Since he never speaks, there seems to be an effort to portray his relationship with Adam/He-Man as more than master/pet, most often through either Battle Cat or Cringer being badly injured and He-Man entering a rage, or by He-Man explaining things to him.

During the Sorceress’s vision of King Grayskull’s past, it is revealed that he rode on a gigantic green lion, who wore the same helmet and armored claws as Battle Cat. This lion helped defend the castle and was the only one of Grayskull’s companions not to become an Elder. What happened to him is uncertain, however it does mean that Cringer’s presence at He-Man’s creation may not have been coincidental. Assuming the lion followed its master into the Sword of Power, this would perhaps form the basis for Battle Cat’s power.

You have the power!

You have successfully joined our subscriber list. Now You have the power!