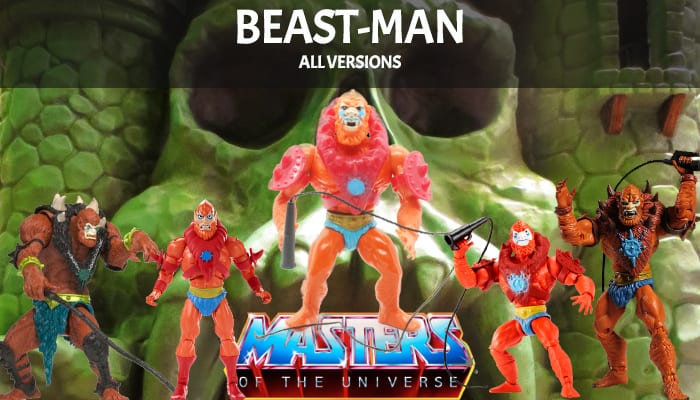 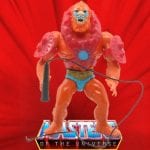 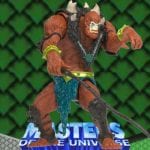 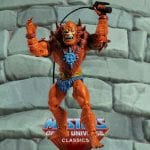 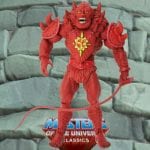 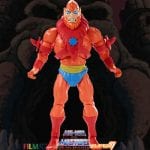 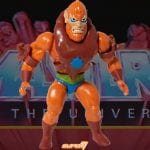 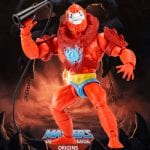 Beast Man is the savage right-hand man of Skeletor and possesses the ability to control many wild creatures and has brute strength.

In Mattel’s first illustrated books, Beast Man is Skeletor’s closest and most loyal follower in a small band of Evil Warriors. As the toy line expanded, he remained at Skeletor’s side as a ferocious man-beast who can summon most of the wild creatures of Eternia to aid Skeletor’s schemes.

He appeared in the following minicomics:

He-Man and the Masters of the Universe

One of the first seven figures to be released for the Masters of the Universe toy line, Beast Man is an action figure that came with red removable chest and arm armor, and his weapon of choice was a black string string whip. You also see Beast Man wearing yellow armor that came with the Weapons Pak. As Beast Man was continually re-released with each figure wave, the earlier versions came with a squishy head. The latter versions of Beast Man were constructed with a solid, hard, head. The head sculpt has blue markings around the eyes, and, due to limitations with animation in the early 80’s, the cartoon did not feature these same markings and the design was reduced to shadows under his eyes. Beast Man did not have any action features, other than the line’s general waist-twisting action.

Beast Man appears frequently in the cartoon series, introduced in the first episode “Diamond Ray of Disappearance”. His cartoon portrayal is generally consistent with his mini-comic portrayal, although he displays small undertones of resentment towards Skeletor for bossing him around and secretly desires to overthrow him, like a few other members of Skeletor’s evil villains.

In 2002, Matel relaunched the Masters of the Universe toy line and cartoon series. The figure is physically much larger, bulkier, and was constructed with a hunched back. Beast Man’s color scheme is toned down, with deeper orange-red fur and dark brown armor. A change to the figure mold for Beast Man is the way the arm armor is now part of the figure instead of wearing removable armor that you can take off (and subsequently lose). The action feature of this new version makes the figure swing his arms downward when a button on his back is pressed, creating a slashing motion that looks cool with the whip in his hand.

Beat Man’s character in the 200x Modern Series is very much the same as his portrayal in the original He-Man and the Masters of the Universe Cartoon. Beast Man remains loyal to Skeletor in this series, dropping the desire to overthrow him and still retains the power to control wild animals.

The Masters of the Universe Classics line merged elements from various storylines and fiction over the years. The toy line was geared toward collectors and was not accompanied by an animated series. The lack of articulation in previous figures was addressed in this line as Beast Man has full articulation at the ankles, knees, hips, waist, shoulders, elbows, wrists and neck. In 2016, an homage to Beast Man’s red mini comic version was created as a Power Con exclusive figure. The figure is all red and comes with a whip and removable armor in the form of the classic breastplate/arm guard combo. The figures, however, included new character biographies that merge elements from various different incarnations of the franchise as well as some newly-developed information to form a new continuity called ‘Classics.’ Beast Man, aka Raqquill Rqazz, came with the following bio:

After being banished from his home in the Vine Jungle, the beast man named Raqquill Rqazz joined up with a young alchemist named Keldor™ during a skirmish in the Berserker Islands. Like others of his race, Rqazz has the ability to control beasts and monsters. He currently uses this particular talent as chief henchmen to Skeletor®, the Overlord of Evil™.

Filmation Masters of the Universe

Beast Man was also part of the Filmation line first created by Mattel then taken over by Super7 where his cartoon likeness was finally captured. He came with his traditional black whip and a shield, which is a new weapon for Beast Man