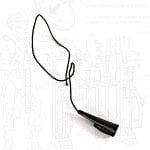 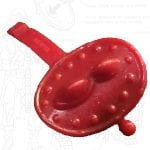 One of Skeletor’s main henchmen and right hand men, Beast Man was an orange furry doofus who was not very bright. The one redeeming quality he possessed was the ability to use his beastliness to control animals to do his evil bidding. Continually portrayed as the Lord of Destruction’s chief underling, he readily followed his master’s commands. Possessing great strength and low intelligence, Beast Man was always ready for a fight, though he frequently displayed cowardice, particularly in the face of punishment from Skeletor. At times, he wielded mysterious hand weapons which produced fiery blasts.

In the series, Beast Man was initially portrayed as vindictive and nasty, often resenting Skeletor’s leadership. The series shifted him into the role of the bumbling henchman, often providing comic relief and inadvertently foiling Skeletor’s schemes. His strength and other talents were regularly underappreciated by Skeletor. Despite disliking his master, Beast Man seemed to possess a twisted love for his role among the Evil Warriors and went to great lengths to preserve it. Beast Man’s most recognizable power, telepathically controlling animals, solidified during the Filmation series. If he lost consciousness, he would lose control over any creature under his command. Beast Man stated once that he would be relatively powerless without the power of Snake Mountain behind him. Shadow Beasts were apparently the only creatures that followed his orders without the need for mind control. Much like many other Evil Warriors, Beast Man occasionally struck out on his own endeavors, often teaming up with Trap Jaw.

In the She-Ra and the Princess of Power cartoon, Beast Man was portrayed much as he was in the Filmation MOTU series. Beast Man appeared to appreciate the beauty of Adora, calling her a “pretty princess,” but he was unable to keep her captive. Despite his failures, Beast Man’s formidably was demonstrated in his final appearance in a Filmation show when, during a team-up with Trap Jaw, he used his great power to overthrow Sweet Bee’s entire race.

The figure has a dark orange body with red removable chest and arm armor. He also comes ready to fight with black string whip with a plastic handle, which was reused from Mattel’s Big Jim toy line. Being one of the figure that was constantly reissued year after year, the latter versions of Beast Man came with a hard head, vs. the more squishy heads of earlier years.

The action figure and the cartoon appearances line up pretty well, with the main difference being slight departure in the face in the cartoon.

Beast Man has the distinction of making his first appearance in Mattel’s very first illustrated books as Skeletor’s most loyal henchman among a few close band of Evil Warriors that made up Skeleltor’s inner circle. The cartoon kept the consistency in his character, unlike Trap Jaw, where Beast Man was portrayed as a ferocious man-beast who can summon most of the wild creatures of Eternia to aid Skeletor’s plot to gain access to Castle Grayskull and rule Eternia.

Beast-Man: “I will not fail !”
Skeletor: “You better not fail, fur brain.”

Skeletor: “Beast-Man, use your mental power to tame and command that creature.”
Beast-Man (using his power over beasts): “There. Tame as a kitten.”

“Giant crawler, arise ! Hehe, this should bug them a little ! hehehe!”

Skeletor: “It’s He-man !”
Beast-Man: “That muscle-bound meddler, let me take care of him !”

“Whenever something doesn’t work around here, I catch the blame !”

According to the Grayskull Wiki, Beast Man appears frequently in the toy line’s accompanying cartoon series by Filmation, introduced in the first episode “Diamond Ray of Disappearance”. Although toned down slightly for the younger-child friendly series, as were many of the characters, his cartoon portrayal is generally consistent with his mini-comic portrayal, although in some early episodes the show’s writers added extra dimensions to his character in that despite his loyalty, he clearly resents being bossed around by Skeletor and secretly desires to someday overthrow his master. This side of his character is brought to the forefront in the episode “Prince Adam No More”, in which he is finally thrown out of Skeletor’s crew. Feeling useless without the power of Snake Mountain behind him, he sets out to prove his worth by capturing King Randor by himself and bringing him to Snake Mountain. Although he succeeds in capturing the King, when He-Man comes to the rescue he is subjected once again to Skeletor’s wrath and admitted back into his ranks purely so Skeletor has someone to vent his anger on. But his final line in the episode “It’s kind of nice to be home” indicates he now feels he belongs as Skeletor’s underling, and subsequent episodes portray him mostly for comedy value, willingly succumbing to Skeletor’s abuse and constantly bungling his schemes. Notable episodes for Beast Man in the show’s later stages include “The Shadow of Skeletor” and “Orko’s Return” which restore him to his original, darker portrayal, working independently and craftily to achieve his aims. The powers of Beast-Man are shown effective in some earlier episodes, such as “Creatures from the Tar Swamp”, “A Beastly Sideshow” and “The Dragon Invasion”. His ability to control animals is not impeccable, however. For instance, he cannot control Cringer, Battle Cat, or Panthor.
Beast Man remained a fairly regular character throughout the run of the 1980s series, while some other earlier figures like Zodac, Mer-Man, Tri-Klops and Stratos gradually dropped out of sight when newer characters were released. He generally held his position as Skeletor’s right hand man throughout the cartoon’s run, although in some later second season episodes this position was occasionally filled by characters such as Clawful or Whiplash, as writers attempted to promote newer characters more prominently. Beast Man was often teamed up with Trap-Jaw, one of the other earlier characters to remain consistent through the show’s life.

Beast Man’s background is never mentioned in the cartoon, although the series bible states a surprising origin for him, explaining he was once a thuggish human from Earth called Biff Beastman who owned a farmyard on which he constantly abused the animals. He was recruited as chief technician on the spacecraft piloted by Marlena Glenn, which crashlanded on Eternia, but he wound up on Skeletor’s homeworld of Infinita, where he was mutated into Beast Man and recruited by Skeletor.[1] This origin story appears in a storybook entitled “New Champions of Eternia” but was unpopular with most of the show’s writers and therefore excluded from the series.