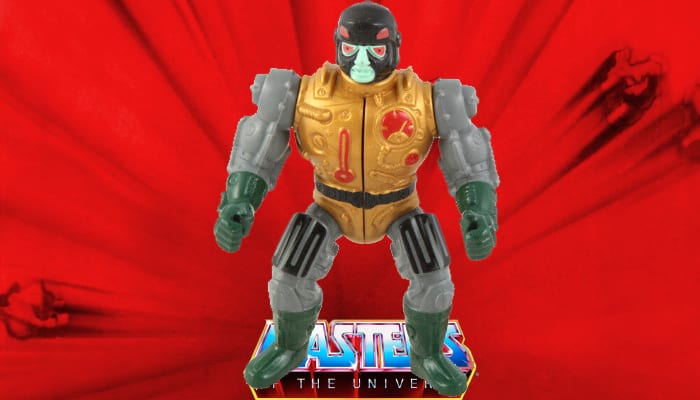 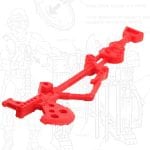 Blast-Attak was a robotic time bomb created by King Hiss. He was equipped with a timer which created a deadly explosion, splitting his android body in half. His two halves could rejoin after one of his explosions. He is an android and has a unique ability explode like a time bomb to cause intense damage to foes or surroundings. The really cool part is he also can reform automatically to become a ground hog day bomb and do this again and again and again. 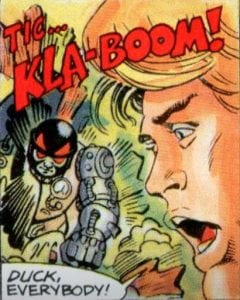 According to the Grayskull Wiki, Blast-Attak was introduced into the Masters of the Universe toy line in 1987. His action figure, which was made of two separate halves which could be ‘blasted apart’ via a cord snapped into his back, came packaged with the mini-comic “Revenge of the Snake Men” in which he is presented as a creation of King Hiss, and a minion of the Snake Men. This allegiance seems unusual, because Blast-Attak was packaged as one of Skeletor’s minions and is not in any way snake-like. He appears in the US Marvel Comics as a minion of Skeletor, with a different background, having been summoned from another dimension. In this incarnation, his most prominent characteristic is his reluctance to take orders and submit to authority; as Skeletor summons him and Ninjor, he addresses them as his slaves, upon which Blast-Attak furiously snaps back “Your what!? Blast-Attak is no one’s slave!”

Due to Blast-Attak’s later introduction into the toy line, he never makes any animated appearances and his exposure across all other media is minimal, thus he is one of the least well-known MOTU characters.

Blast-Attak does not appear in the updated 2002 toy-line or cartoon series. Although this is probably because none of the characters from so late in the original line are featured in the updated version, many have speculated that Blast-Attak would have been unlikely to appear anyway – at least without heavy modification – as a children’s toy who blows himself up to injure and destroy his enemies would be unsuitable in modern society, where suicide bombers are a reality.