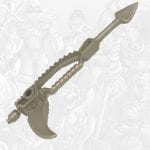 Butthead is an evil Space Mutant with a spring-loaded neck from the 1991 New Adventures of He-Man toy line. He was packed with the following accessories:

BH (as he is known in the cartoon) first appeared in Glastnost Schmaznost, trying to assassinate Mara during a session with the Galactic Council on Skeletor’s orders. BH is possibly the most dim-witted of all the Mutants, but despite this he usually carries out his orders successfully, unlike the similarly stupid Slush Head. BH’s face is hidden by a mask and helmet, his true face never seen. His hard head and helmet allow him to physically butt his enemies and send them flying, delivering a powerful blow.

BH is usually paired up with his fellow Mutant Quakke, and they are most frequently used as henchmen by Skeletor when he is on missions away from the Mothership. BH and Quakke generally seem to be friends, with BH looking up to Quakke for his higher intelligence. Though BH has displayed a distrust of Skeletor, and during Mutiny on the Mothership was convinced to take part in Staghorn’s mutiny against Flogg.

BH’s duties on the Mothership include running the docking bay, and looking after the Terrortreads and Terroclaws stored down there. In The Sheriff of Gorn City, He volunteered to be said Sheriff, claiming he was ‘just the guy’ for the job, but was ultimately denied the position by Flogg and Skeletor. In Brain Drain, due to their low intelligence, BH, Slush Head and Staghorn were the subjects of a device that increased the Mutants intelligence, though it turned out they became a little too intelligent for their own good, and were eventually returned to their normal selves.

When Flogg organised the final invasion of Primus, he contacted BH, who was on Nordor, and ordered him to gather all Mutant forces from the skull-face moon, and bring them into battle. BH participated in the final battle, and later witnessed Flogg’s surrender.