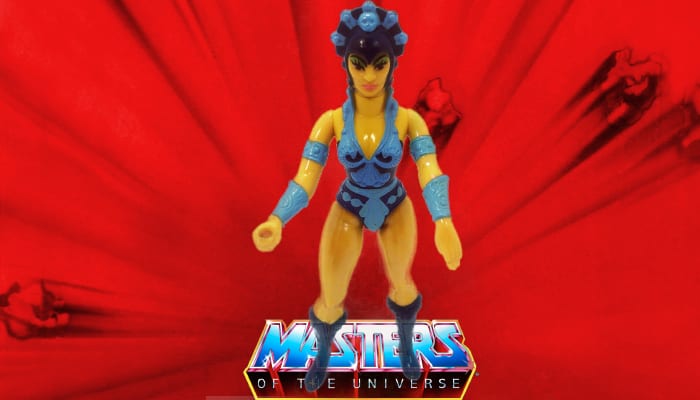 Evil-Lyn was Skeletor’s own magic-wielding witch and worked just as hard to gain power and overthrow Skeletor. She had no quarter for any Hero but if she was in a pinch, she would align herself to anyone to gain the upper hand. 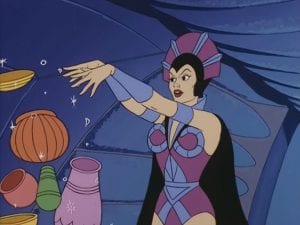 Described by Skeletor as his “right hand of evil,” Evil-Lyn was both his greatest ally and worst enemy. Unlike her yellow-skinned toy version, Evil-Lyn was depicted as having olive skin. The most talented and intelligent of all the Evil Warriors, Evil-Lyn had magical powers that made her second only to the Lord of Destruction, a fact that immensely frustrated her. She once revealed to Teela that she felt no loyalty toward Skeletor; it was his power that she wanted. She proclaimed that one day she would seize Skeletor’s power, and all of Eternia would feel her might. She often recruited other Evil Warriors for her own plots and delighted in bossing them around. After each rebellious outburst, Evil-Lyn would inevitably fall back under Skeletor’s protection. Evil-Lyn was one of the most powerful beings on Eternia. Her magical abilities appeared to be endless, both with and without her wand. She could fire beams from her hands and eyes, create blinding flashes of light, teleport, disguise herself, give life to inanimate objects, control the minds of others, prevent herself from feeling hunger or thirst, and conjure violent storms, among other things. Her magic was occasionally used to power mysterious relics from Eternia’s past, including the Shaping Staff, the Spellstone, and the Dragonpearl. She could also increase her own magical abilities by using foreign mystical objects, such as the Cosmic Comet.

In the MOTU minicomics Evil-Lyn had yellow skin to match her toy version. She wielded the powers of darkness with remarkable skill and appeared to be the most intelligent of Skeletor’s Evil Warriors. The evil sorceress of Snake Mountain had many magical powers at her disposal and also carried a magical staff topped with a mystical orb. Little is known of the orb, though Evil-Lyn referred to its power as “blue crystal magic.” Evil-Lyn was quite treacherous and once stated, “I am on no one’s side but my own.”

According to the Wiki Grayskull, For gender diversity, Evil-Lyn was introduced into the Masters of the Universe toy line in 1983 in order to add a female to the Evil Warriors. Initially envisioned as an evil warrior-goddess and counterpart to Teela, Evil-Lyn’s action figure is identical to Teela’s except in color scheme, head mold and accessories. The original figure has bright yellow skin.

With her intelligence, fearlessness and her incredible magic skills, Skeletor clearly could not hope for a more capable ally than Evil-Lyn, who is often left in charge when he is away from Snake Mountain. Voice actress Linda Gary imbued Evil-Lyn with the qualities of perniciousness and refinement simultaneously, and indeed, whatever the character did, she did it with style, unlike the vast majority of the other villains. Although the toy line may have designed her as an evil counterpart to Teela, in the cartoon she was really more of an evil counterpart to the Sorceress, rather than Teela, seeing as how she possessed no warrior skills whatsoever, but more than compensated for this by her expertise in magic and witchcraft.

She would use all manner of magic spells to battle against the Heroic Warriors, and duped many people with her magical disguises in episodes such as The Shaping Staff, The Curse of the Spellstone, Evil-Lyn’s Plot and The Royal Cousin.

She is also shown to frequently branch out on her own and conduct her own schemes away from Skeletor in episodes such as Ordeal in the Darklands. Journey to Stone City and No Job Too Small also portray her working as an independent agent. Additionally, Evil-Lyn renders her services to aid other super villains, such as Gorgon in The Defection, and Dark-Dream in Eternal Darkness, hence affirming time and again that she is by no means devoted to Skeletor.

This is brought to the forefront in the episode The Witch and the Warrior, perhaps the most in-depth character study of Evil-Lyn in the series, in which she is forced into making an uneasy alliance with Teela when the two of them are stranded in the desert together. Having always held Teela in total contempt, and never having regarded her as a formidable adversary (unlike He-Man and the Sorceress), Evil-Lyn acquires a degree of respect for the young warrior’s skills and intelligence, going so far as to say that she and Teela could “make a great team” after all. She also declares to Teela in this episode that she has “no loyalty to Skeletor”, and that she only works for him because she eventually hopes to acquire his superior powers. At the end of the episode, Evil-Lyn evinces shades of goodness as she thanks Mallek for saving her life and healing her injuries. As a token of her heartfelt gratitude, she refuses to steal that which Skeletor sent her to obtain, and proves that she is not subservient like the other Evil Warriors, stating that Skeletor can “come get” what he wanted “himself”.

Although her background is never mentioned in the series, the series bible claims she was once a scientist from Earth called Evelyn Powers, who was on board Marlena Glenn’s space craft before it crash-landed on Eternia. Evelyn had been insanely jealous of Marlena for being chosen over her to pilot the shuttle. When the ship crashed as the result of an explosion from Skeletor’s homeworld of Infinita, Evelyn wound up on Infinita, where the evil powers of that world turned her knowledge of science into sorcery to aid Skeletor. This origin is used in a storybook entitled New Champions of Eternia but was unpopular with the show’s writers and therefore never alluded to in the cartoon.