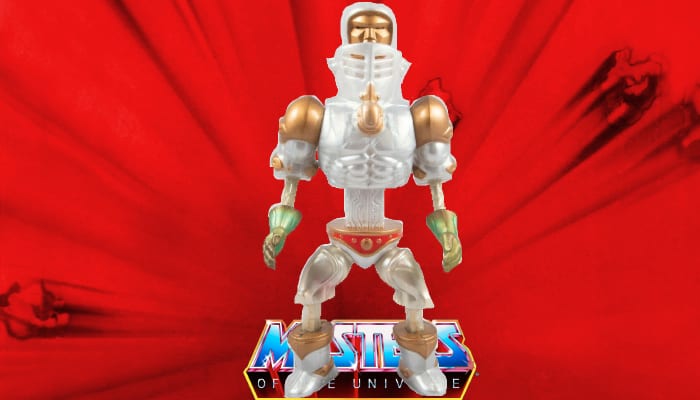 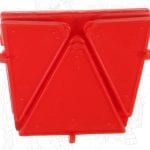 Extendar is a character from the popular Masters of the Universe franchise. A member of the Heroic Warriors, he is a cyborg warrior who appears at first to be an ordinary knight in silver armor, his face shielded by a visor. However, he is able to mechanically extend his limbs, waist and neck to extreme proportions until he towers above his opponent, attaining invincibility at his full height. Known as the “Tower of Power,” Extendar willingly accepted Hordak’s offer to transform him into a cyborg warrior after Extendar was impressed by Dragstor’s abilities. Although Hordak attempted to brainwash Extendar and turn him to the side of evil, He-Man’s intervention prevented this and enabled Extendar to break free of Hordak’s control. King Randor and Queen Marlena subsequently welcomed the Tower of Power into the ranks of the Heroic Warriors. Extendar’s ability to increase his size by extending his mechabiotic arms, legs, neck, and torso also amplified his strength, making him a formidable warrior. 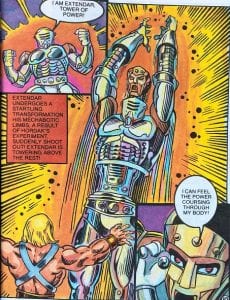 According to Wiki Grayskull, Extendar was introduced into the Masters of the Universe toy line in 1986[1] , at a stage when the toy line was breaking away from its roots in pure fantasy, and introducing more robotic and mechanical characters. Given that the accompanying cartoon series had been cancelled by the time his toy reached the market, he never appears in animated form. However, he features prominently in various comics and storybooks, and is introduced in the Mattel mini-comic “The Warrior Machine”. This comic showcases him as a friend of Prince Adam who is an ordinary knight, but yearns for special powers of his own after witnessing the skills of the Horde warrior Dragstor. Hordak subsequently grants his wish and subjects him to scientific experiments which turn him into a mechanical cyborg warrior with the power of extension. Invincible at full height, he is set upon He-Man, but manages to throw off Hordak’s curse and join the Heroic Warriors. Subsequent mini-comics portray him as one of the most powerful members of his ranks.

Another significant backstory for Extendar is given in the UK comic series published by London Editions, which despite only being available in Europe has gained widespread appreciation amongst the general fan community. This comic series introduces Extendar in a joint origin story with Dragstor entitled “My Friend No More”. Extendar and Dragstor began as young athletes, named Doodon and Theydon respectively, and best friends. While competing together in an annual race, Doodon stumbled and fell into quicksand, and Theydon, although leading in the race, sacrificed his victory in favor of saving his friend. However, immediately afterwards the two were captured by the Evil Horde and taken to Hordak’s laboratory, where Hordak turned them both into cyborg warriors to serve him. Although Theydon was completely brainwashed upon his transformation into Dragstor, Extendar, touched by the way his friend had saved his life, resisted the effects of the brainwashing and escaped from Hordak. He joined the ranks of the Heroic Warriors and vowed to fight on until Dragstor was freed from Hordak’s curse. The relation between these two warriors is built upon in later stories, in which Extendar finds himself unable to fight against Dragstor due to their former friendship.