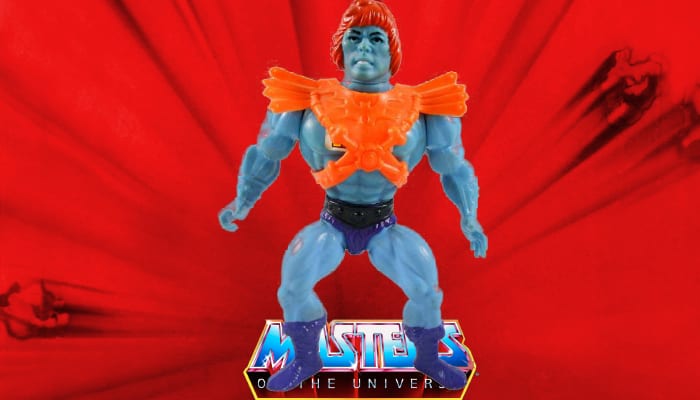 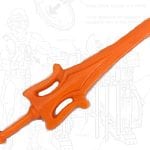 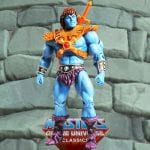 Faker as he appeared in the Masters of the Universe cartoon 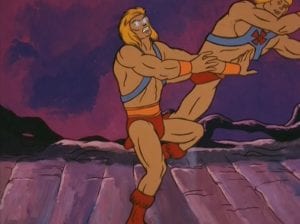 Magically created by Skeletor to fool the Sorceress, Faker was an evil replica of He-Man, only distinguishable by his glowing eyes and a voice with little inflection. After a brief battle with the real He-Man, Faker fell down the bottomless gorge surrounding Grayskull.

The MOTU minicomics, along with the action figures they accompanied, depicted Faker with a radically different appearance from the Filmation animated series. Though he possessed He-Man’s physique, the robotic Faker had blue skin and wore an orange version of Skeletor’s armor. Despite these differences, Skeletor was still able to use Faker to confuse his enemies. Faker’s sole minicomic appearance established that he was a longtime member of Skeletor’s Evil Warriors. Faker was summoned to help Skeletor prevent King Randor from piercing the veil between dimensions, but was defeated by the combined efforts of King Randor and the Sorceress when King Randor’s spear flew straight into the android’s chest.

According to Wiki Grayskull, Faker was one of the earliest characters to be produced for the Masters of the Universe toyline, released onto the shelves in early 1982. His toy is a blue-skinned, red-haired repaint of the He-Man figure, wearing armor identical to Skeletor’s in orange, with a sticker showing inner robotic workings over his chest. His skin color and armor are intended to make him appear as a cross between He-Man and Skeletor. Only one mini-comic, late from the original toylines run, features the character – “The Search for Keldor” – and the suggestion is that he is an evil robot built to duplicate He-Man’s power and use it to serve the forces of evil. He is used by Skeletor to impersonate He-Man in order to distract King Randor from uncovering the great secret of Keldor. Randor is not fooled by this attempt and Faker suffers a quick defeat, impaled on Randor’s spear.

There were two versions of the original release of Faker – a very early version with darker boots and a larger chest sticker (which was not completely hidden by his armor), and the more common version with purple boots and more concealed chest workings sticker.

The Faker figure was reissued in the late stages of the toy line, in 1987, with a slightly different color scheme and solid head (as opposed to the hollow rubber version released previously).

The action figures second release by Mattel in 1987 is a very rare and sought after collectors item today. Its rare existence can be attributed to being released very late into the toy series original run.

When Faker appears in a single episode of the MOTU animated series by Filmation, the cartoon presents a radically different interpretation of him, which greatly confused toy buyers. Appearing in the early episode “The Shaping Staff,” Faker appears as an exact physical replica of He-Man with the same skin tone and armor as the real He-Man, the only physical differences being glowing eyes and a hollow-sounding voice. This is primarily due to the artists at Filmation being able to cut costs by reusing He-Man’s character model rather than drawing up a new one for Faker, wearing Skeletor’s armor. Paul Dini’s original notes for “The Shaping Staff” indicate that Faker was originally intended to appear like the action figure, but Filmation chose instead to depict him as identical to the real He-Man in order to cut down on costs, by avoiding having to produce extra cels for different characters.
He is presented as a magical creation rather than a robot, created by Skeletor out of thin air in a surprisingly easy manner, leading one to wonder why Skeletor did not use his magic to create a whole army of evil He-Men if such an act was this easy. His role in the episode is minor, appearing only in a five-minute sequence in which he is created to lure The Sorceress out of Castle Grayskull by pretending to be the real He-Man in pain from an injury. After a quick fight with the real He-Man, Faker charges at him and falls into the bottomless abyss of Grayskull, never to return for the rest of the series, despite Skeletor’s claims about recovering him. Though it is never confirmed or denied in the story, Faker’s fate can be taken as the only time that a villain is effectively killed in the series. The fact that Faker is only a magical creation and not a “living” being is probably the reason that the violence-cautious producers allowed this fate to occur. Originally, He-Man was shown throwing Faker into the pit, but Scheimer insisted that the scene be redone rather than send children the wrong message. An android He-Man was shown in the following episode, “Disappearing Act,” this time built by Man-at-Arms at the direction of the Sorceress.

The writer of the episode wanted to bring Faker back and eventually have his skin tone change, making him into a Bizarro sort of foe, but without the broken speech, but he never realized his intent.