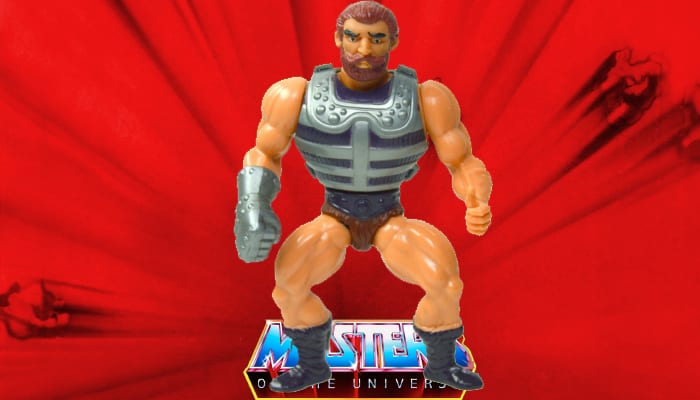 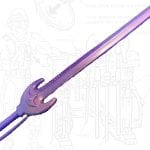 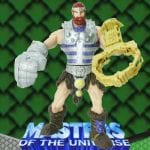 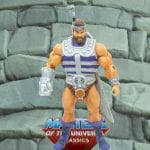 Originally the caretaker of a forest, Fisto is an extremely strong warrior with a metal right hand that packs a powerful punch! Second only to the strength of He-Man, he was conflicted to join the fight against Skeletor but ultimately decided to join the heroic warriors quest to defeat the evil ones. 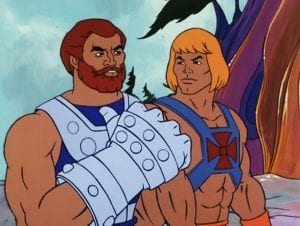 In the Filmation series, Fisto was introduced as a minion of Skeletor, allied with an oversized spider named Arakna. His base of operations was a dense forest. After his life was saved by Rayna, a local villager, Fisto joined the heroes and was pardoned by Randor. Henceforth, he was honored and humbled to be included among them. He continued to live in the forest but made trips to visit his friends at the Royal Palace. His strength, much of which was derived from his mighty fist, was hailed as being on par with He-Man’s. 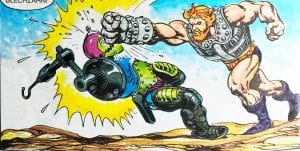 The minicomics portrayed Fisto as a rugged fighter who wielded a large metal fist on his right arm and rode the mechanical horse Stridor. Known as the “Master of Hand-to-Hand Combat” and depicted as a hearty sort, Fisto could be heard bellowing, “Har! Har!” at the conclusion of an adventure. Fisto was once captured and forced to battle in the Circle of Doom. He defeated both Clawful and Jitsu in combat. He was exhausted by the time he faced Whiplash and nearly perished under the might of the evil reptile. He survived thanks to the intervention of He-Man and Stridor.

According to Wiki Grayskull, Fisto was introduced into the Masters of the Universe toy line in 1984, packaged as the ‘Heroic Master of hand-to-hand combat’. He appears in the second season of the line’s accompanying cartoon series by Filmation, featuring in four episodes: “Fisto’s Forest”, “The Rarest Gift of All”, “To Save Skeletor” and “The Games”. In “Fisto’s Forest”, his origin is told, detailing how he was originally a villain who terrorized the forest in servitude to Skeletor, before being convinced to change his ways by He-Man, now living in peace with the peasants of the forest. However, Fisto receives little in the way of character development, simply transferring from a villain to a hero in the space of one episode without any real character depth. He is presented as a gruff outdoor type, who does not really like the confines of the Royal Palace, but his appearances in subsequent episodes are generally little more than cameos. His only other significant role is in “The Games”, in which he is selected to represent the side of good in a series of games set by an alien race observing Eternia.
In the toy line, the evil character of Jitsu was marketed as an adversary to Fisto, his design being an Asian equivalent of Fisto, with a large golden right hand enhanced for performing karate chops. But the apparent rivalry between these two characters is never sufficiently developed by any media and there is no official background story detailing any kind of history between them. They fight hand-to-hand in the Mattel mini-comic “The Clash of Arms”, packaged with both their figures, but no backstory between them is mentioned, they are only used in the story due to their figures being released at the same time. Neither does the cartoon ever cover this plotline given that Jitsu only appears in one episode of the cartoon series, the early episode “The Dragon Invasion”, long before Fisto’s introduction into the series.

Marketing also linked Fisto to the Heroic Warriors’ war horse Stridor. There was a boxed set of the pair widely available, and toy commercials, storybooks and comics frequently features Fisto riding atop Stridor, implying he belongs exclusively to Fisto, although Stridor is listed as He-Man’s steed on his package. In actuality, the figure and horse are only linked due to them being released at the same time. Likewise, Jitsu has a similar link with Night Stalker, Stridor’s evil counterpart. The link between Fisto and Stridor is apparent in practically every medium other than the cartoon, which makes no connection between the two.