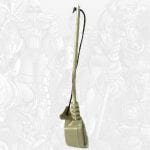 Flogg is a Space Mutant with a mostly red and silver color scheme and was released in the first wave of The New Adventure of He-Man toy line. He has a spring loaded waist, when turned, results in a lash attack of the whip as his arm twists back and forth. He comes packed with the following accessories:

In the TV series, Skeletor does not take command of the Mutants, but fakes allegiance to Flogg. Since Flogg remains as leader of the Mutants, there are moments in which Skeletor must abandon his plans in order to follow Flogg’s orders. Though not so cunning as Skeletor, Flogg is not so insane, making a sort of balance between the two. Though he is not particularly intelligent, Flogg is an imposing military commander who is most effective when he is commanding his Mutant armada from the Mutant Mothership.

Skeletor and Flogg come to an agreement: Skeletor will help Flogg conquer Primus in return for Flogg’s help in destroying He-Man. One of Flogg’s terms is that he will remain in charge of the Mutants. Skeletor agrees, and is able to manipulate and control Flogg from behind the scenes by using Flogg’s own arrogance and vanity to control him. As the various plots to destroy He-Man and conquer Primus are usually devised by Skeletor, Flogg is always quick to blame Skeletor when things go wrong. Flogg also appears to fear Skeletor, and sometimes Skeletor simply intimidates Flogg into doing what he wants.

Thanks to Skeletor, Flogg actually succeeds in conquering Primus after a clever scheme fooling Primus and its ruler Master Sebrian into thinking the Mutants want peace. Flogg is able to proclaim himself King of Primus and the Mutants seize control of the planet with Skeletor in pursuit of He-Man and the growing rebellion against the Mutant invaders. The Mutants remain in control of the planet for some time; as Mara states in the episode “Skeletor’s Victory” that she and He-Man have been in the wilderness for days. The Mutant invaders are eventually forced to flee Primus when the entire planet rises up against them and their Mothership is forcibly removed from the planet. Skeletor and Flogg’s dominance over Primus and victory over the Primans lasts for a total of five episodes including “The Gift”, “Skeletor’s Victory”, “He-Man in Exile”, “The Seeds of Resistance” and “The Battle for Levitan”.

At the end of the series, Skeletor, Flogg and the other Mutants take part in the Galactic Games where they fight the Galactic Guardians and He-Man. The Guardians win the games, but the organizers of the Games capture them. During their imprisonment, Flogg finally decides to attack Primus with everything he has, including having the Gleanons under Crita’s leadership assist them. The Mutants are able to conquer Primus once again, with the Galactic Guardians and He-Man absent, but the Guardians escape their captivity and return in the Starship Eternia. The Primans are once again able to defeat the Mutants, and Flogg realizing he has finally lost, agrees to surrender all his forces.