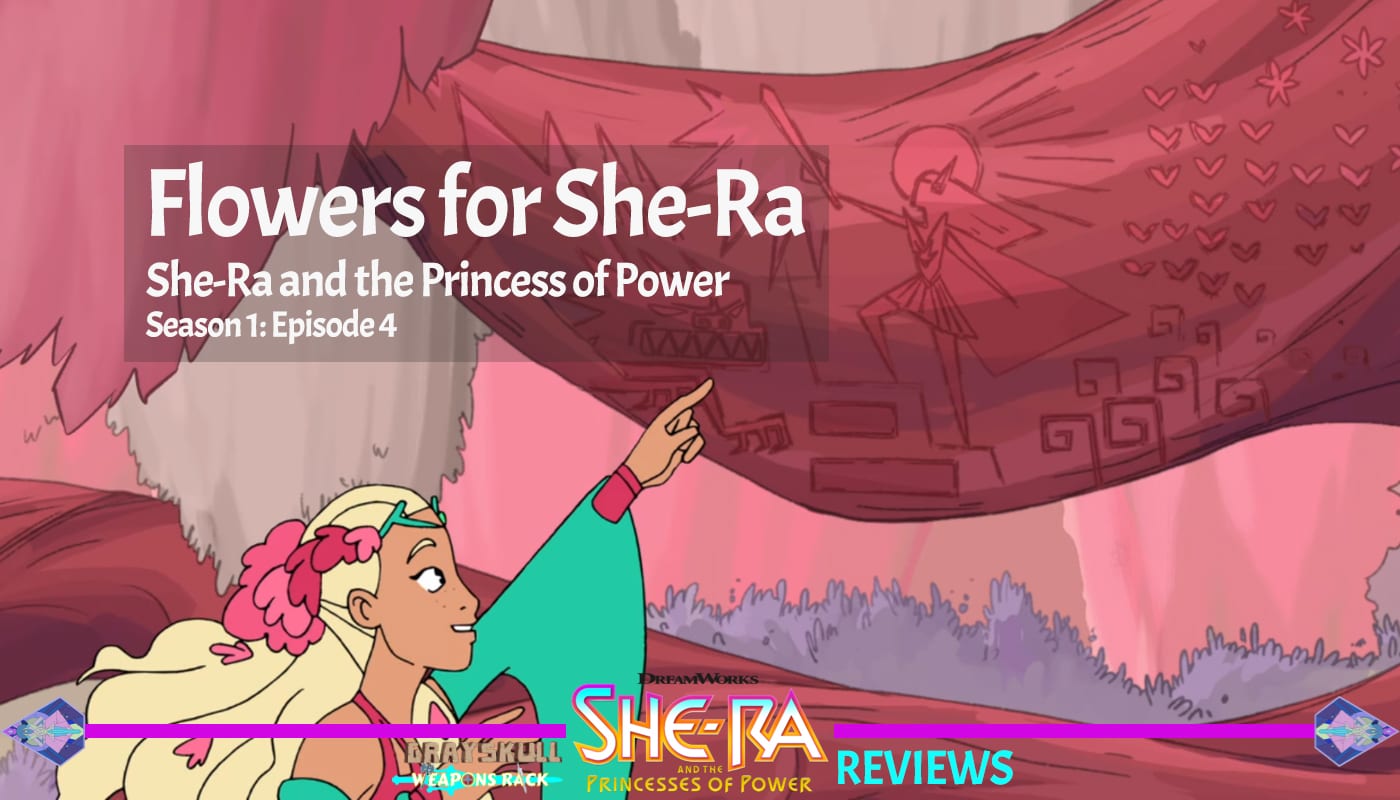 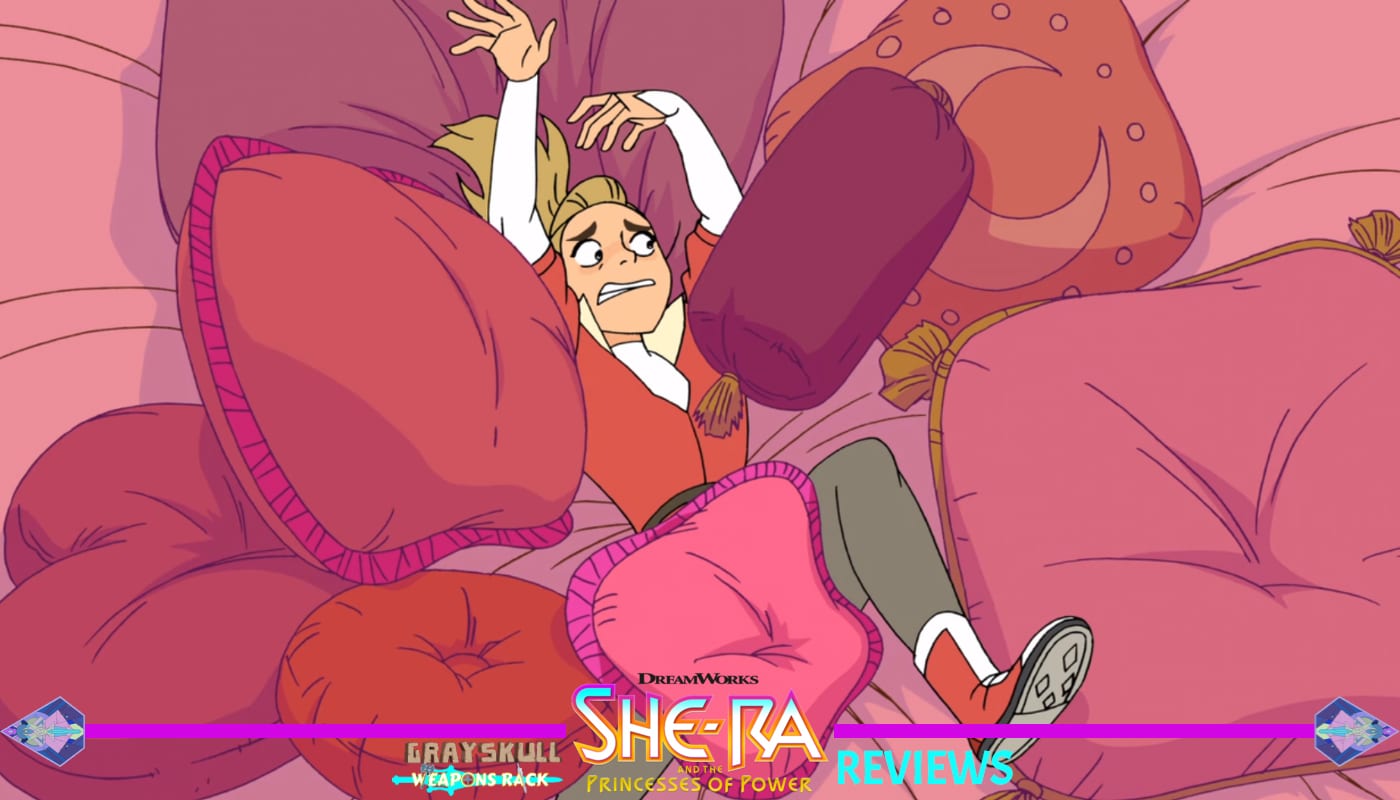 Adora has a difficult time adjusting to her new life in Bright Moon and although her past is still fairly recent, one thing she has not done before was sleep alone. She decides to roam the castle in the middle of the night looking for Glimmer and runs into Queen Angella, where she educates Adora about King Micah, the Queen’s husband, who was one of the first casualties of the war against the Horde. The Queen goes on to explain that she is willing to give Adora a chance because her daughter, Glimmer, believes in her. Adora finally settles to sleep, but in Glimmer’s bed, freaking her out as she opens her eyes in the morning to see a person with a Horde uniform in her bed, until she realizes it is Adora. 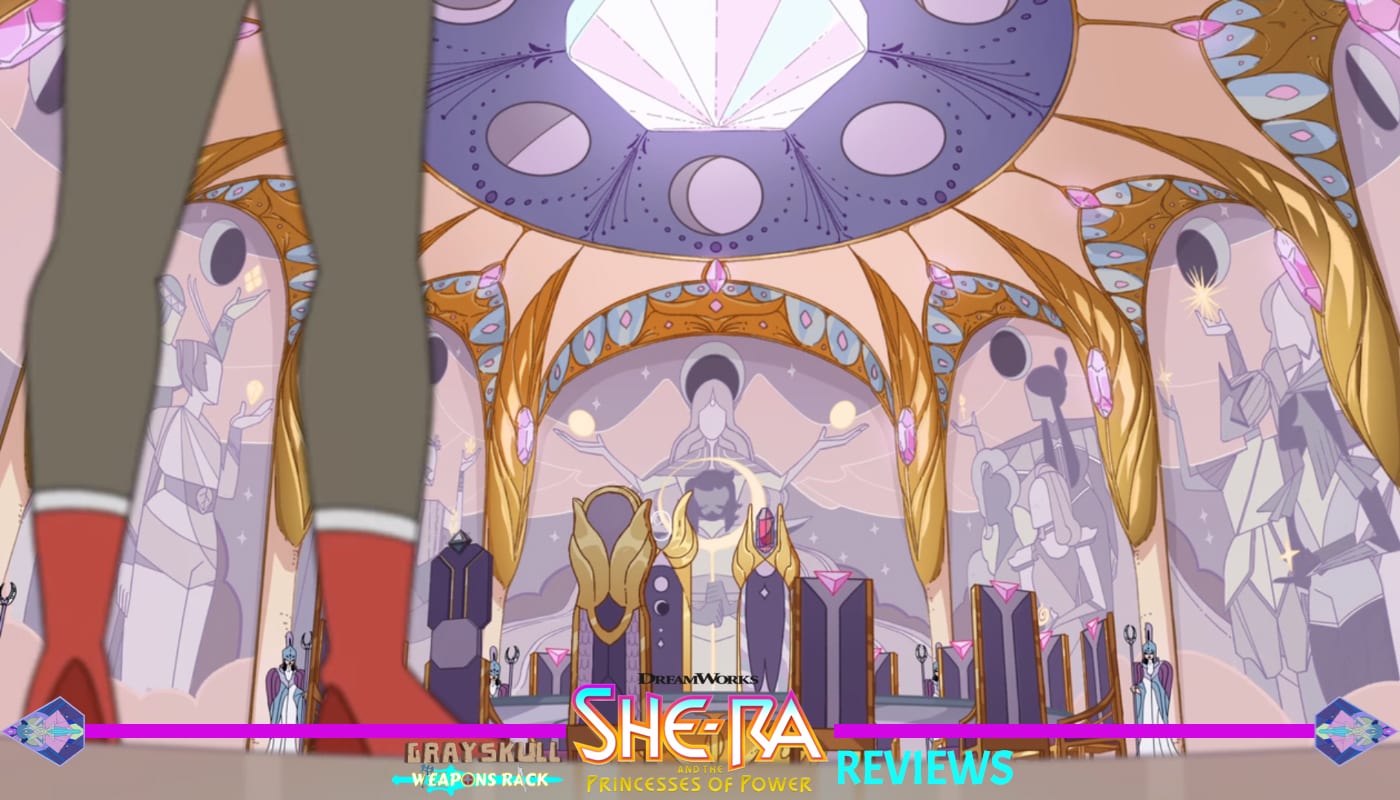 In the morning, Adora, Bow, Glimmer attend a meeting in the war room in Bright Moon castle and Glimmer explains that there was a Princess alliance years ago but they suffered a defeat so the Princesses mostly keep to themselves, held up in their own castles. As everyone gets settle around the table,  we meet Netossa and Spinnerella, a couple familiar faces from yesteryear. Adora is in awe of the war room and as she tries to find her place around the table, she accidentally sits in King Micah’s chair, sparking Queen Angella to put her in her place. The meeting commences and we learn that Perfuma is calling on Bright Moon for aid as her region, Plumeria, is under siege by the Horde. Going the peaceful route, Queen Angella decides to offer humanitarian aid, but does not support a violent intervention. 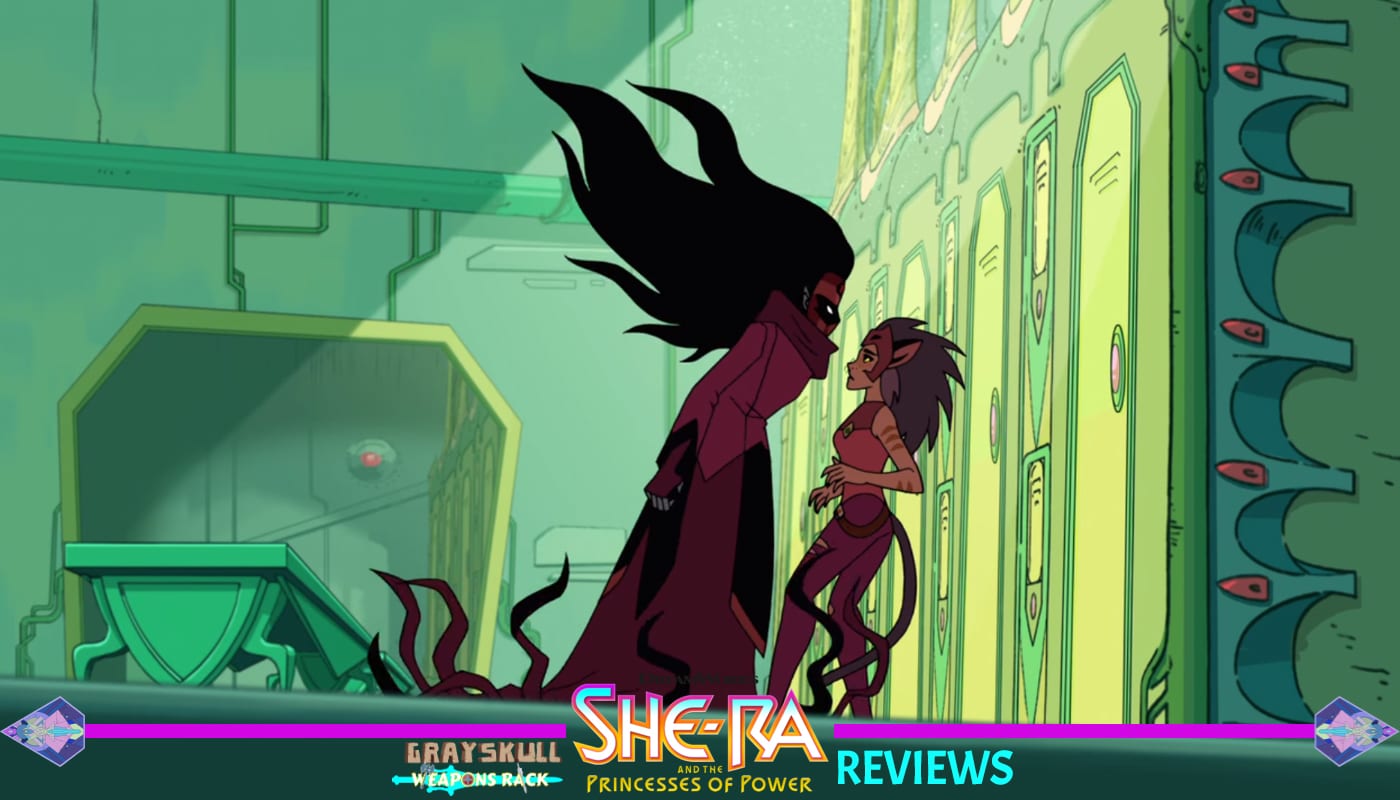 Meanwhile, we cut the Fright Zone, Catra makes it known to her Horde battalion that she was made Force Captain. As Catra is telling her soldiers, Shadow Weaver interrupts and scolds Catra for losing track of Adora. In Catra’s haste, she tears up a drawing of She-Ra and Swift Wind.

Heart Blossom tree, the source of Plumeria and Perfuma’s power, is dying 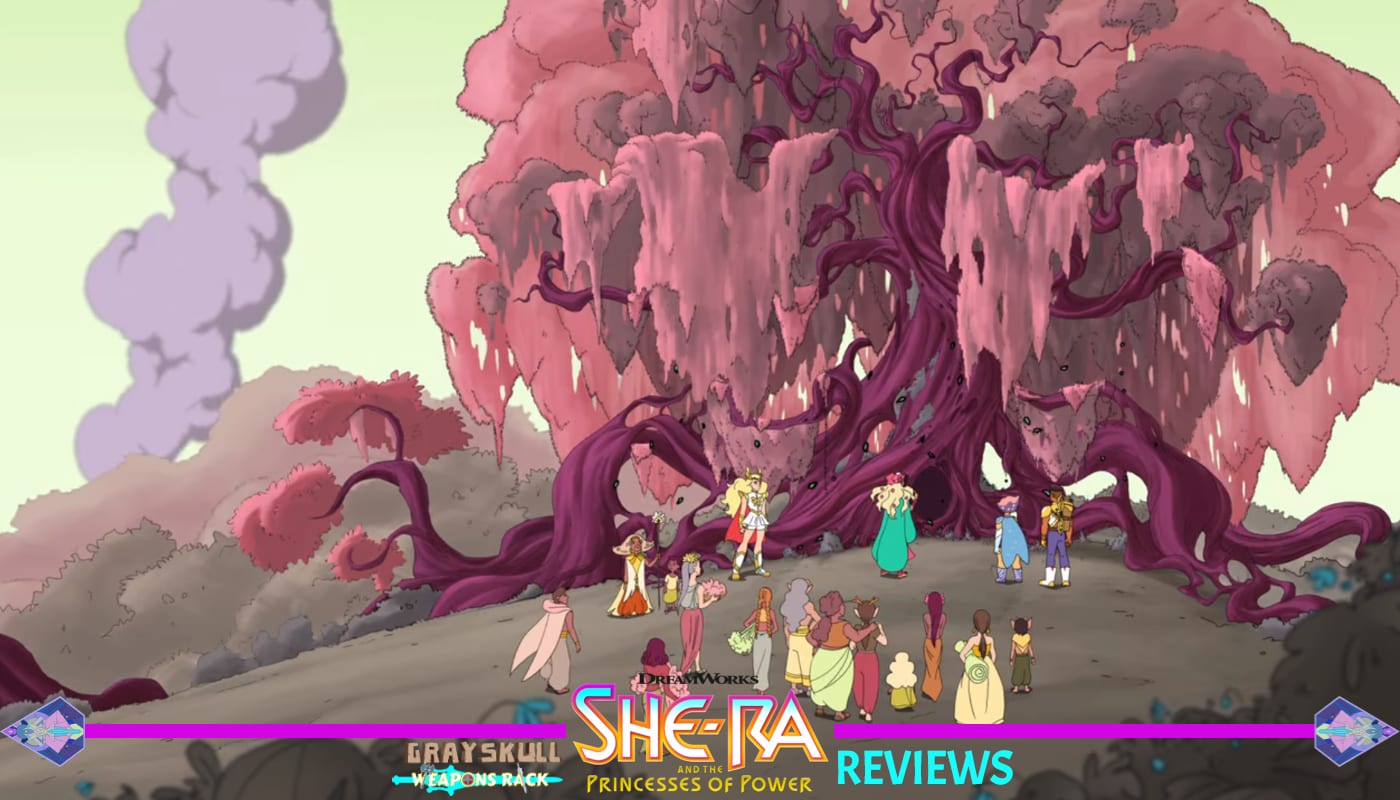 Having transformed into She-Ra, the three arrive in Plumeria where they discover that all the plants and trees are dying. Perfuma, in awe that She-Ra has come to save her land, gives everyone a warm welcome as supplies and aid are given to the people of Plumeria. In a show of power, She-Ra performs one arm presses of the cart full of supplies, impressing everyone in the land and Perfuma. We learn of yet another Runestone, which is in the Heart Blossom tree, which is the source of power for Plumeria and gives Perfuma her special abilities. Perfuma explains that the blight on the plants started just after the Horde arrived and they cannot find a cure.

Shadow Weaver draws her power from the Black Garnet 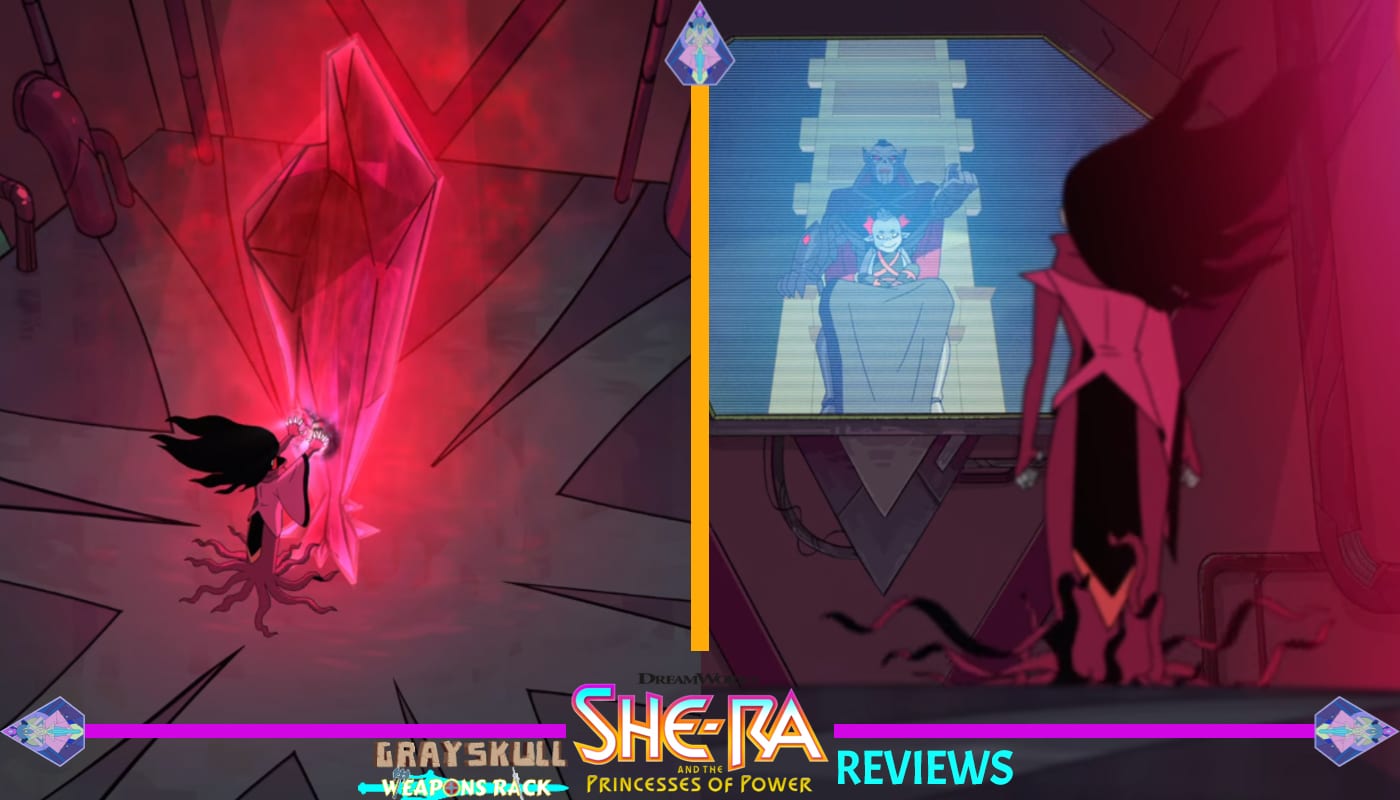 Back at the Fright Zone, we also learn that the Horde is in possession of the Black Garnet, a Runestone where Shadow Weaver draws her power. Hordak interrupts Shadow Weaver as she is pleading with the Black Garnet to not refuse her. Displeased with the time she has wasted looking for Adora, Hordak explains that the current mission is to destroy the Whispering Woods before they launch and attack on Bright Moon. Scolding Shadow Weaver, Hordak orders her to forget about Adora and continue with the mission to attack Plumeria.

Celebration of She-Ra at the festival in Plumeria 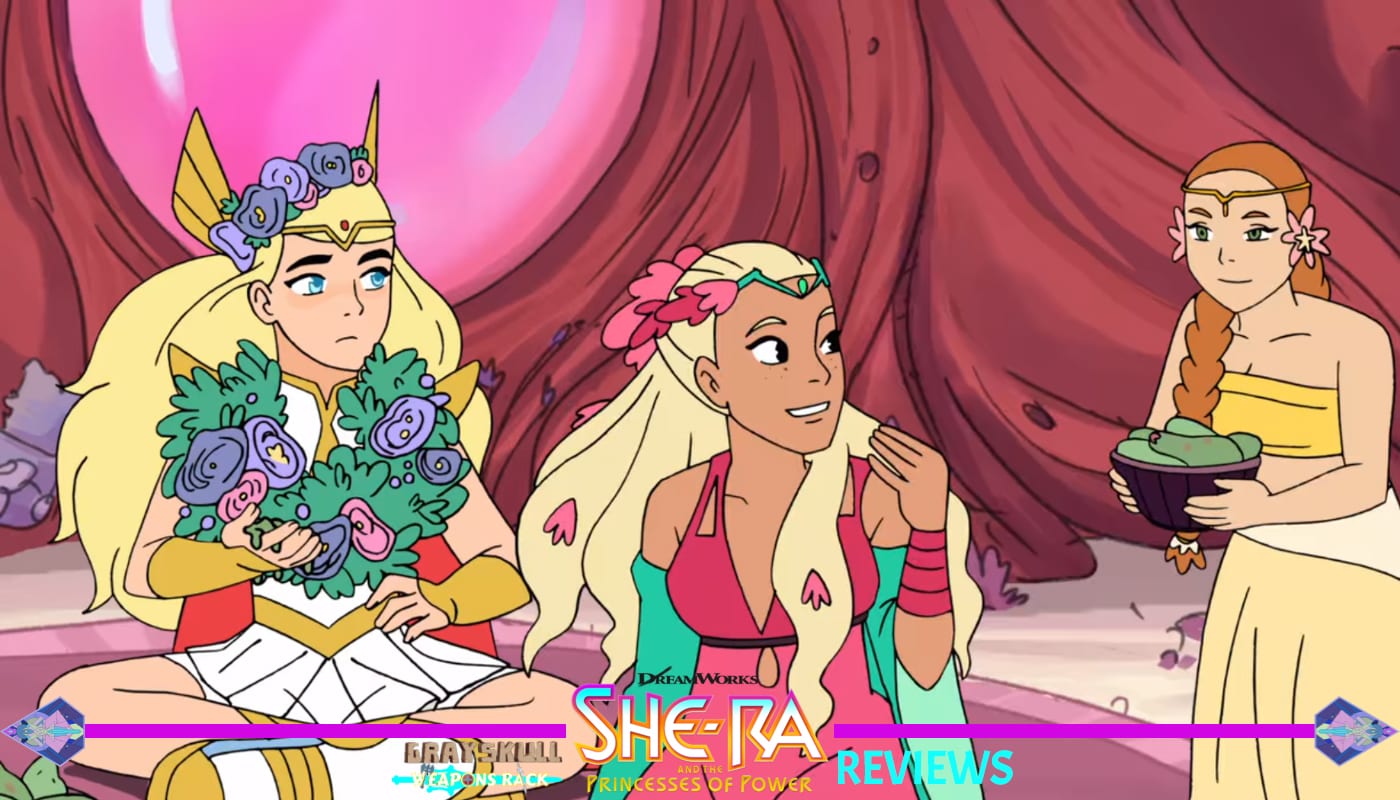 The Celebration continues as She-Ra is adorned with flowers and gifts from the people of Plumeria. Perfuma goes to explain that She-Ra may be the key to solving Plumeria’s woes as she points to carvings in a tree that resemble She-Ra, where she tells the story of the warrior who tamed Beast Island all by herself. All the while, there has been a plume of smoke billowing from the distance, that She-Ra describes coming from a nearby Horde camp, which is somewhat distracting her from the festivities. Perfuma butters up She-Ra as she expects her to heal her land and bring all of the flowers back to life. She-Ra, still new to her power, attempts to will herself to heal the land but she transforms back into Adora in defeat as she does not know how to heal the land. She feels that she has let everyone down as Glimmer tells Adora that they like her not for She-Ra, but for herself. Adora, hearing calamity in the distance, comes up with a plan to save Plumeria.

Adora Bow and Glimmer disguise themselves as Horde Soldiers 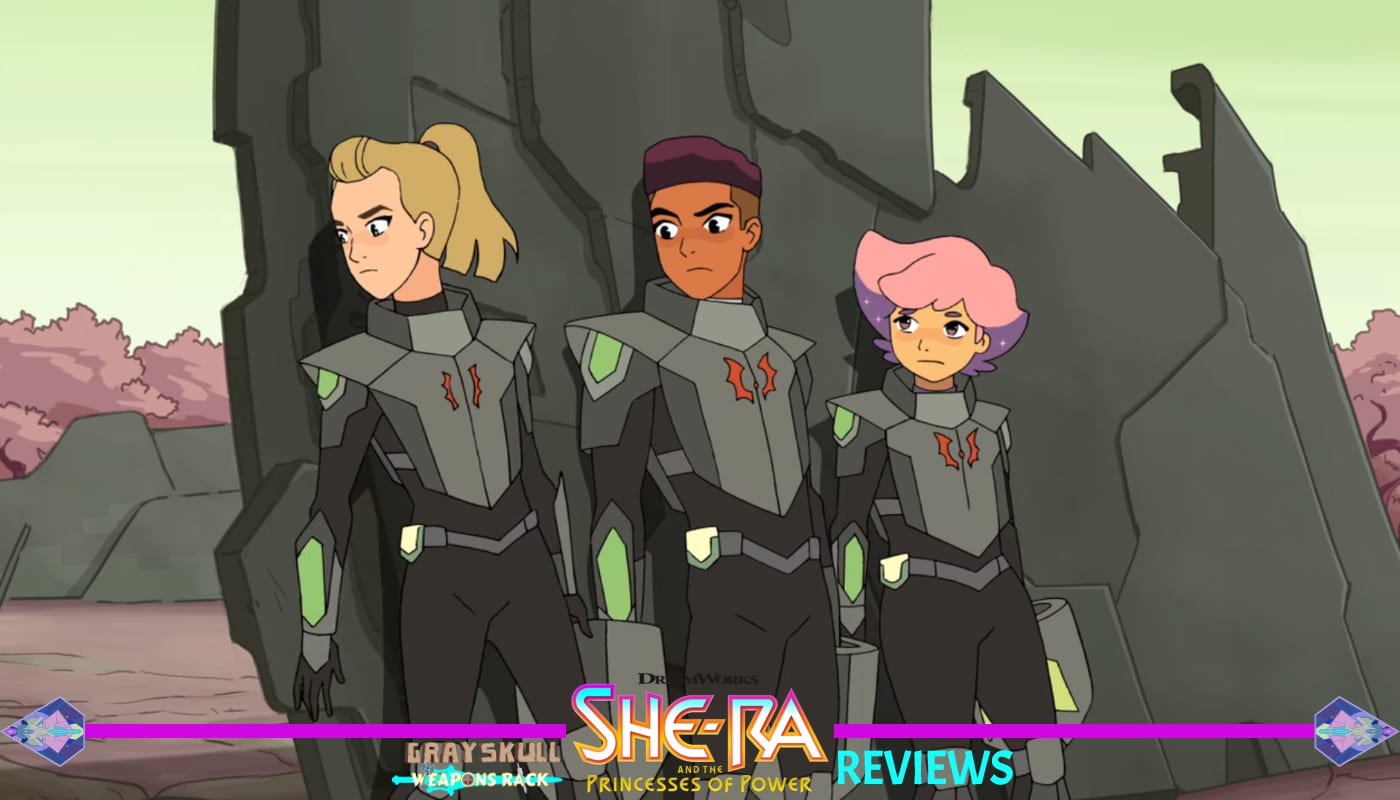 Perfuma attempts to abandon Plumeria but Adora has different plans. Dressing up as Horde soldiers, they infiltrate the camp and discover an evil poison machine injecting blight into the land of Plumeria, and the Whispering Woods. Knowing that shifts change every half hour and that Horde Camps have the same blueprint, they attempt to gain access to the machine with an old password, and are discovered by a Horde soldier who attempts to arrest them, while sound an alarm. Meanwhile, a resident of Plumeria hands Perfuma a handwritten note from Glimmer explaining that the three of them have gone to Horde Camp to destroy the machine. Feeling guilty that Adora, Bow, and Glimmer are putting their lives on the line, Perfuma declares that the people of Plumeria need to fight for their land.

Perfuma to the rescue…”for the She-Ra!” 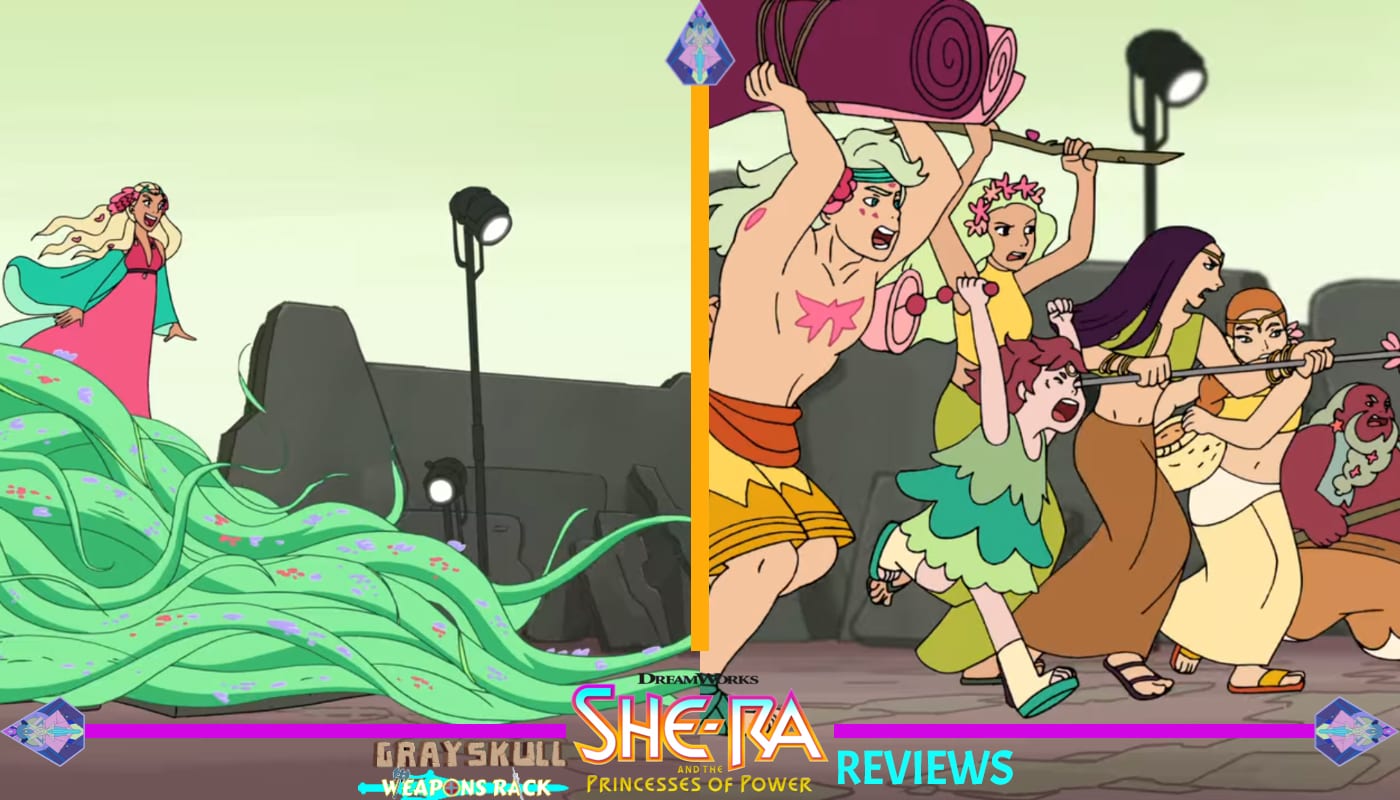 Feeling the Horde soldier, they regroup in part of the Horde camp to devise a plan to take on the Horde army stationed there. They are discovered again and surrounded again by Horde soldiers to face certain death or capture. In the distance, we hear a war horn and we get a taste of Perfuma’s ability to control plants and trees as she rides in on a wave of vines, destroying the wall that leads into the Horde camp. The people of Plumeria come in behind her and assault the camp, as a little one shouts a war cry, “For the She-Ra!” This diversion gives Adora the much needed space to transform into She-Ra! 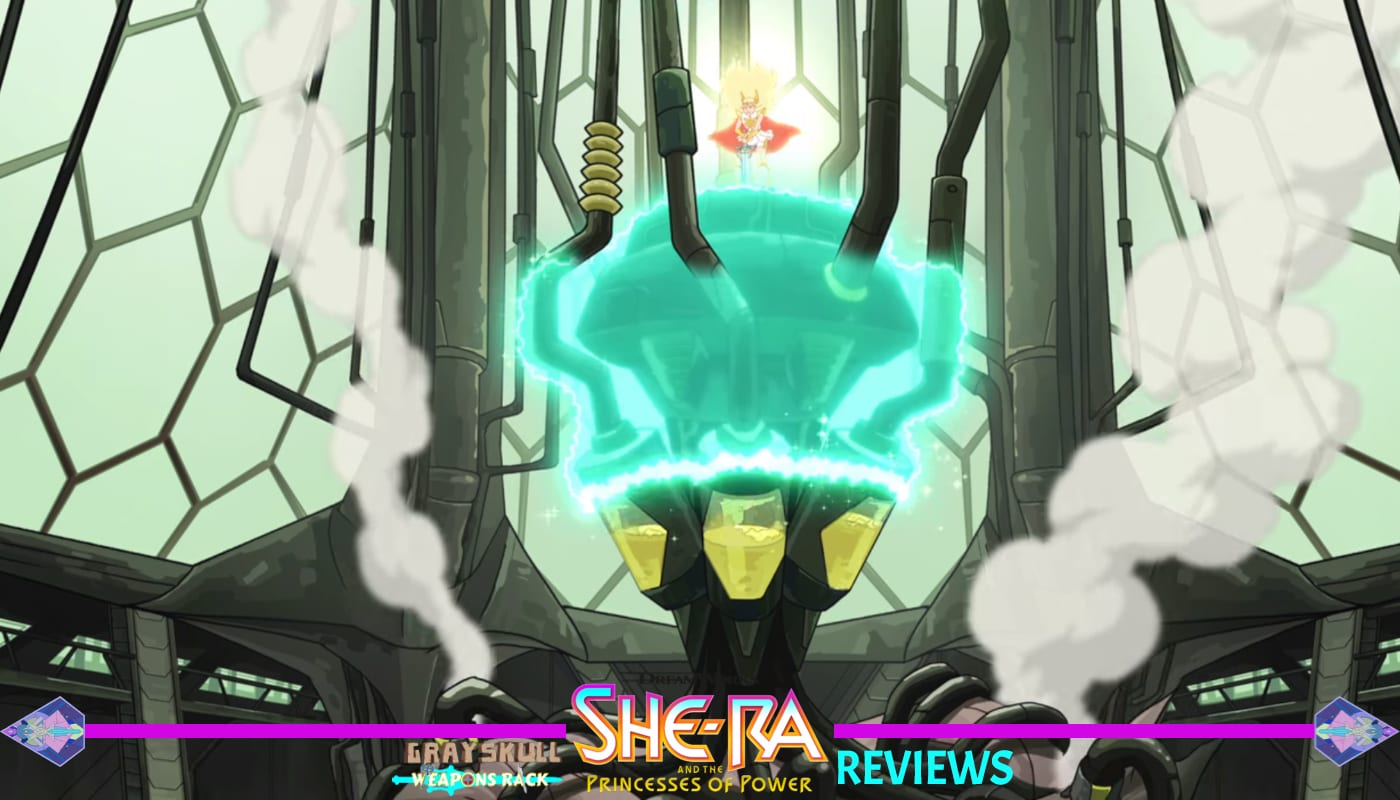 Shouting, “for the honor of Grayskull,” Adora transforms into She-Ra, battles her way into the machine room, and scales the device as she plunges the Sword of Protection into it, unleashing a wave of energy. Doing this allows the energy to permeate the land, healing it, while simultaneously destroying the machine. Doing this also gives Pefuma her full power and ability and she immediately begins producing plants and flowers. Elated, Perfuma starts transforming the blight into beautiful vines and flowersm, healing the Heart Blossom tree and returning order to Plumeria. Capitalizing on this victory, Glimmer convinces Perfuma that she should reform the Princess Alliance. Excited that she would get to hit people with Flowers, Perfuma gladly accepts the invitation as we see the first member of the alliance officially on board to support The Rebellion. 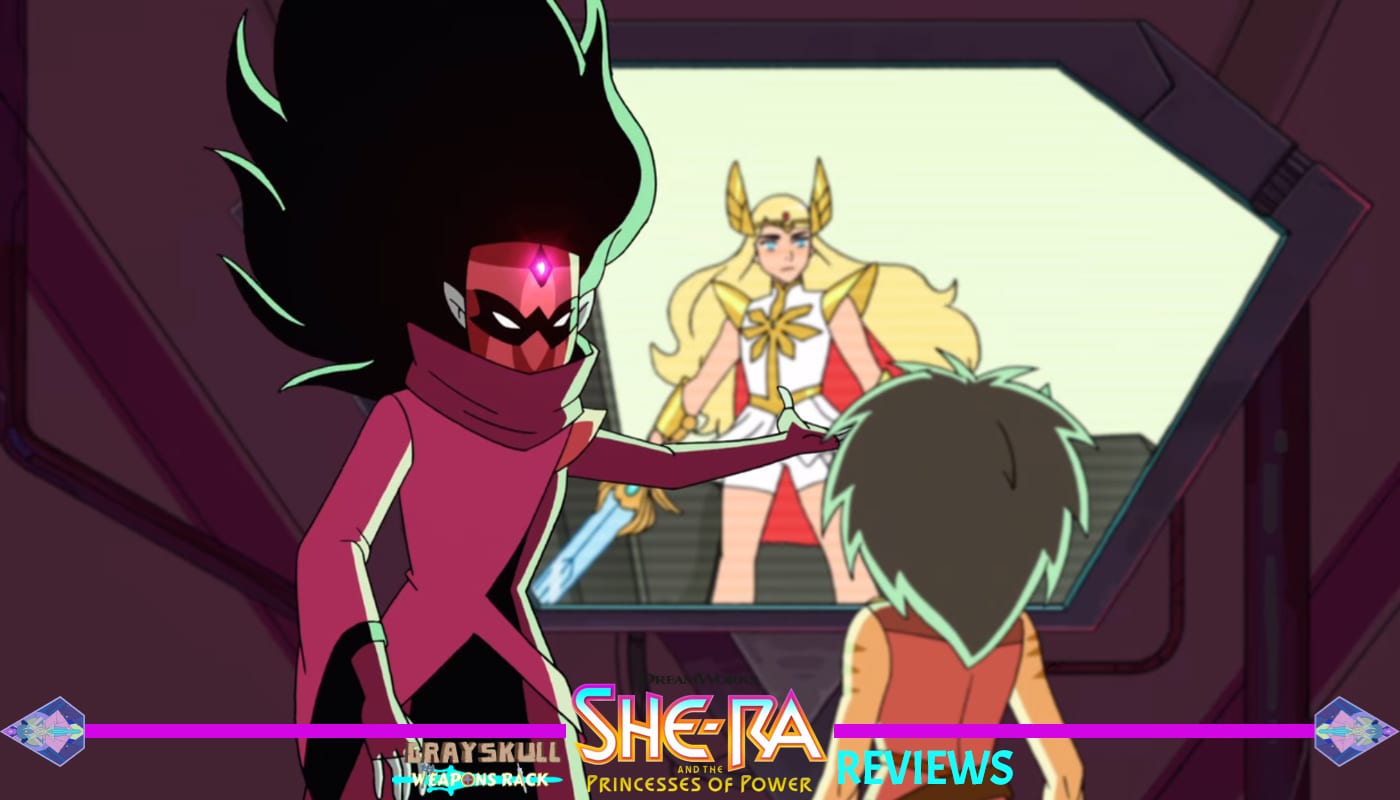 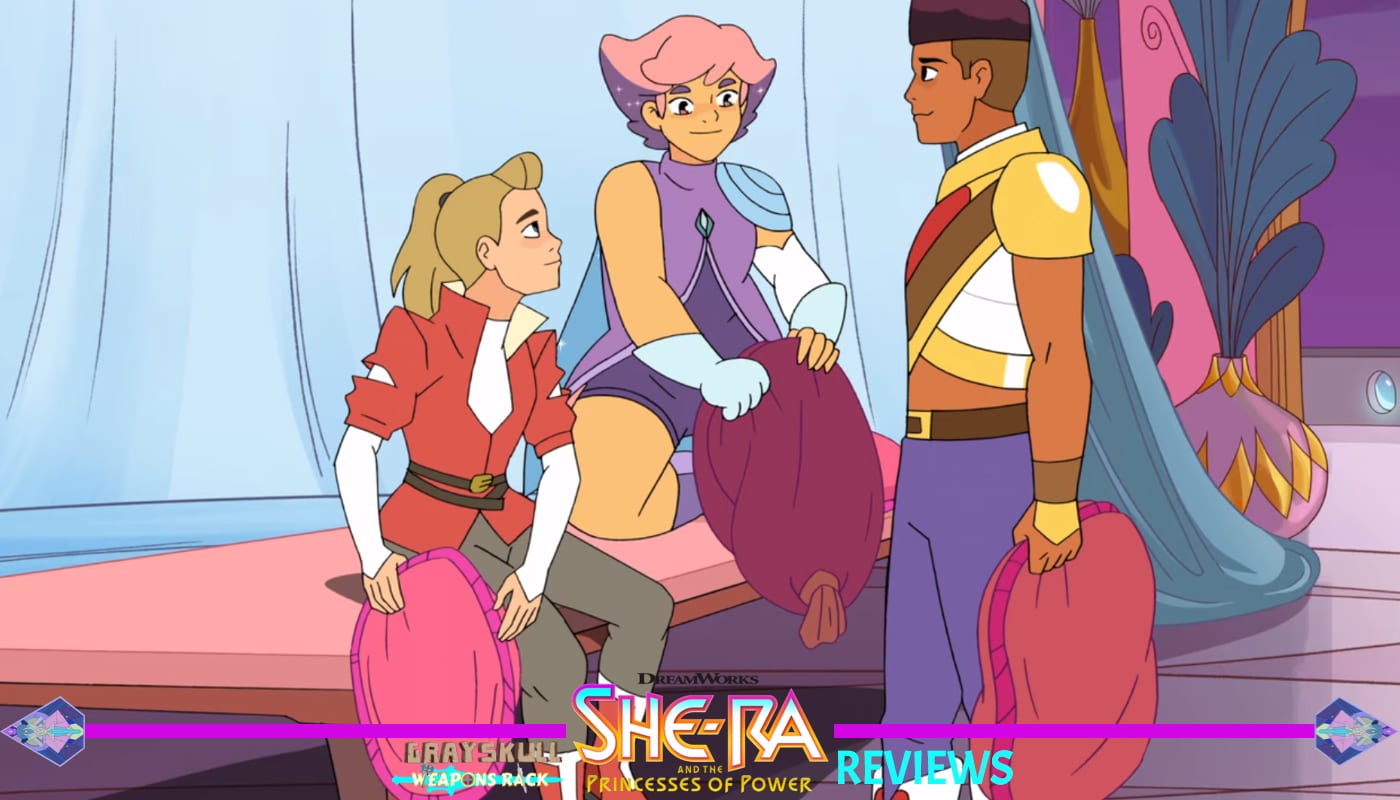 Cutting back to Bright Room, Glimmer and Bow make Adora feel more comfortable by giving her a sleep over and changing her bed to cot, similar to the one she slept on while serving in the Horde army. We learn that Queen Angella has grounded Glimmer for a week for disobeying her but she does not care as the Queen is considering her plan to reunite the Princess Alliance.

Perfuma as she appears in the Dreamworks Netflix series vs. 1980’s Filmation cartoon 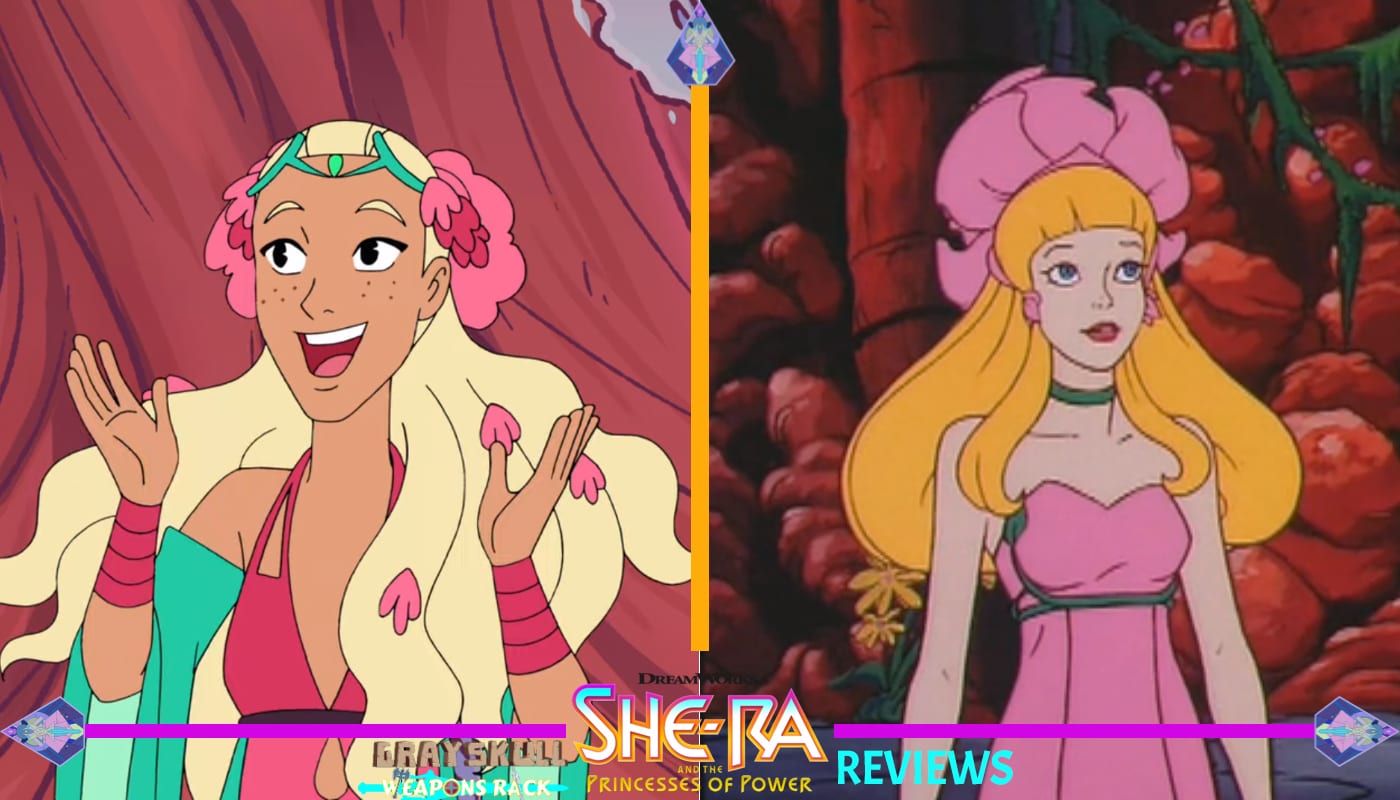 Perfuma is the only Princess so far that resembles her 1980’s counterpart in both her appearance and relative age. She has Perfuma has freckles on her cheeks and blonde hair full of pink flowers with a pink flower tiara on top of her head. Consitant with her 19080’s persona, she is the peace-loving Princess of Plumeria and believes that the universe rewards those who do good and punish those who are evil.

The Evil Horde Machine and the Cobra Weather Dominator 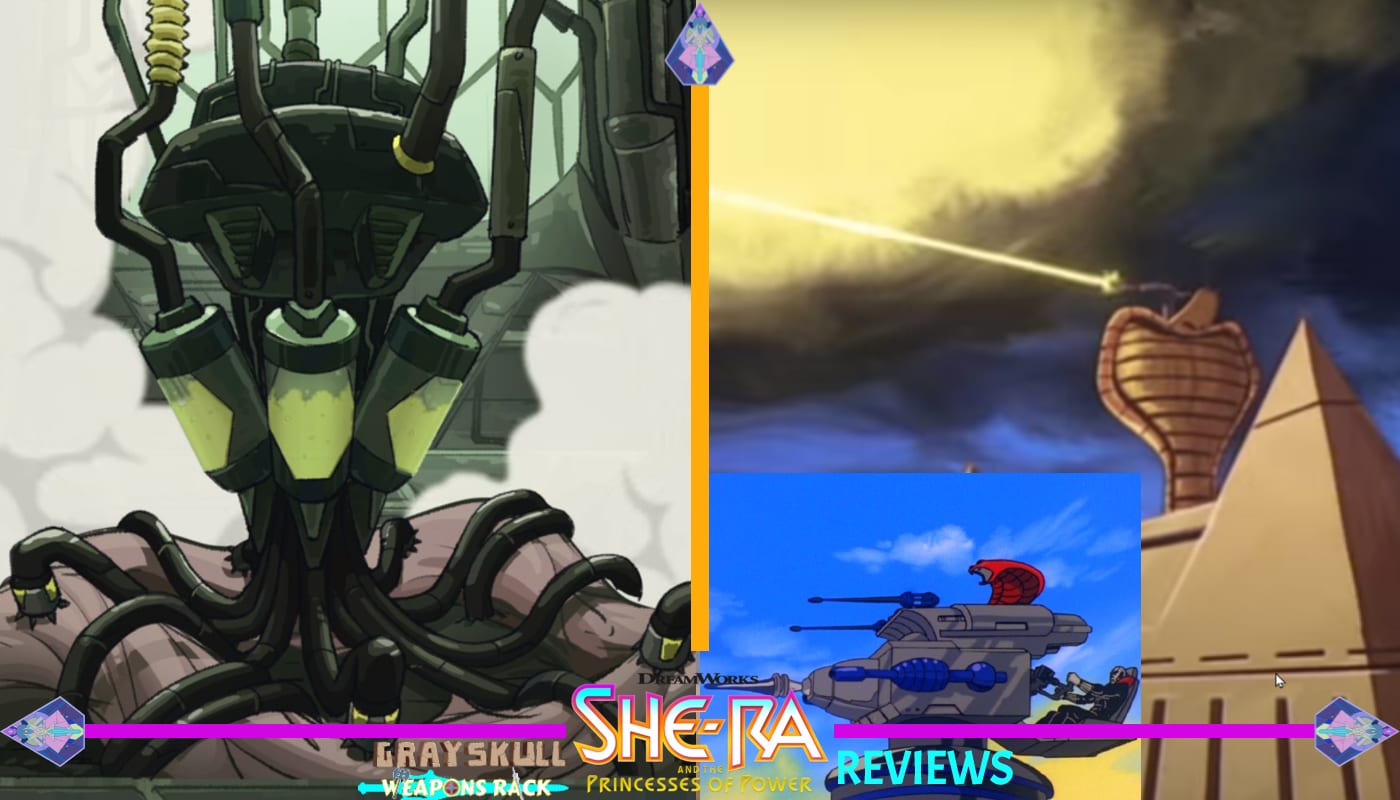 Biological warfare is not a new concept but seeing the Evil Horde machine reminded me of the Cobra Weather Dominator from the GI Joe 1980’s cartoon series. In a similar fashion, the Cobra Dominator is meant to disrupt and control nature so that Cobra Commander can gain control of the world by forcing the people to bend to his will. Like Hordak, Cobra Commander is bent on world domination and will devise anything and everything to accomplish this task. Like all plans to take over the world, the plan is foiled as GI Joe destroys the machine before it can wreak havoc on the world and give Cobra Commander the upperhand.

“Many Bothans died to bring us this information” 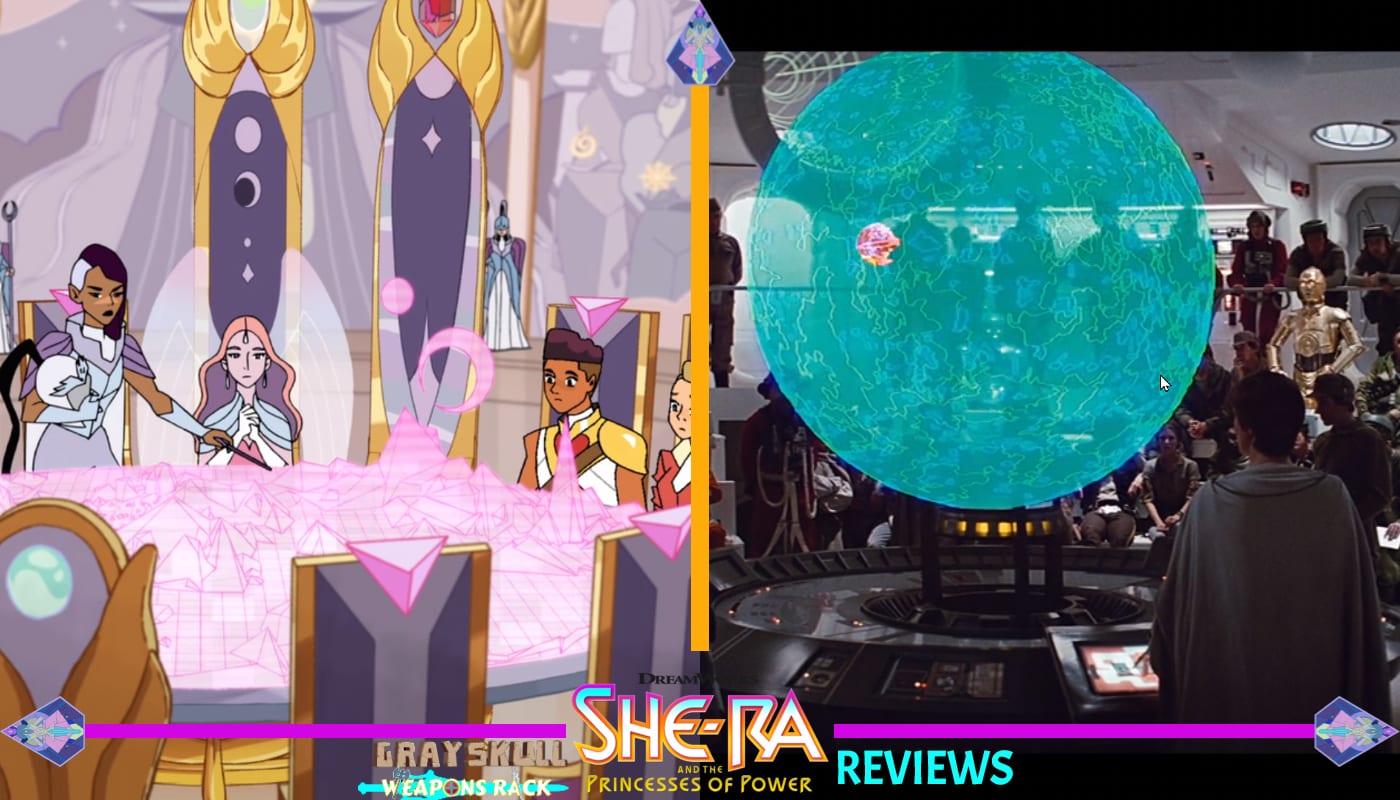 Star Wars was ahead of their time as a scene in the Bright Moon War room was very similar to a scene in Star Wars where Mon Motha, a revolutionary leader of the Rebellion, gathers the troops to discuss tactics to blow up the Death Star to obtain certain victory against Darth Vader and The Emperor. Making use of digital technology, the maps in both the Bright Moon war room and in Star Wars are rendered in 3D as both the palace guard and Mon Motha explain the mission to free their people from the wrath of their aggressors.