Ruthless Leader of the EVIL HORDE 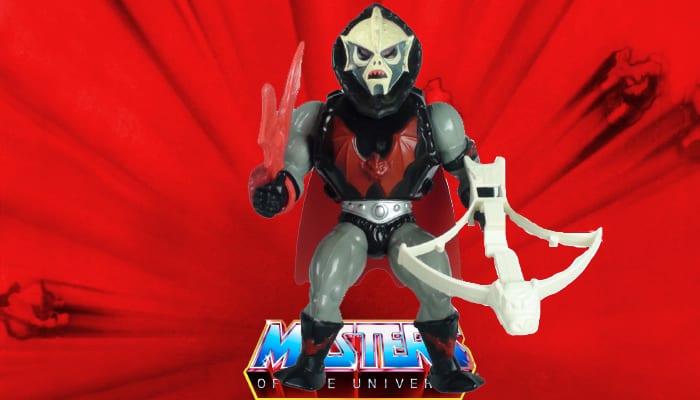 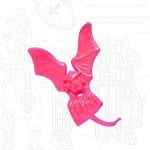 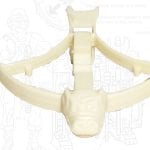 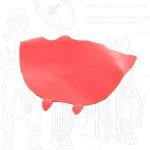 Hordak is the main villain in the cartoon She-Ra and The Princess of Power. Ruling Etheria from his headquarters, the Fright Zone, he is a ruthless tyrant, who derives pleasure in the pain and suffering others. Akin to Skeletor, he uses magic and can turn parts of his body into a variety of weapons and devices, including cannons, rockets, tanks, sawblades, drills and flamethrowers. 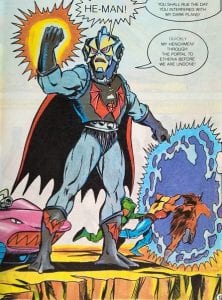 The minicomics depicted Hordak as a ruthless and power-hungry technomancer bent on universal domination. Combining science and sorcery, Hordak created monstrous creatures to do his bidding and commanded a massive army of Horde Troopers. Though he used magic, Hordak generally favored technology. Hordak was an ancient being, and though little is known of his past, it was established that he’d participated in the construction of the Central Tower of Eternia many eons earlier. Among the physical transformations he manifested, Hordak used his hurricane power (a spinning, bat-shaped blade on the end of his arm). His arm also transformed into a cannon which could fire a thunderball mace. When Hordak entered the Central Tower, a terrible buzz saw weapon formed that could burst from his chest and decimate anything in its path. Hordak also developed a kinetic shield that allowed him to deflect blows from his enemies. Though his former pupil once betrayed him by sealing the door between Eternia and Etheria, Hordak and Skeletor occasionally formed uneasy alliances against their common foes. 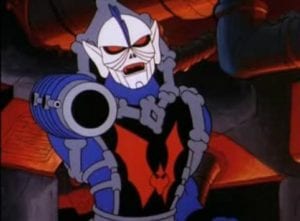 Early in his life, Hordak was trained in sorcery by the Etherian magician Noah. Later, he rejected magic in favor of science and led the Horde Empire’s attempted conquest of Eternia from his base of operations at Snake Mountain. Though the effort failed, Hordak managed to kidnap Princess Adora from the Royal Family of Eternia and escape to Etheria. He left behind his favorite pupil, Skeletor. Hordak, alongside Shadow Weaver and Shakra, raised Adora as a member of the Evil Horde in the Fright Zone on Etheria. Although cruel and feared, he hid his evil side from Adora and showed fatherly affection to her. He returned to Eternia many years later in pursuit of Adora, whom he considered a traitor after her defection to the forces of good. He briefly succeeded in recapturing her, but Skeletor and his men threw Hordak back through the portal to Etheria. Hordak was frequently betrayed by his various henchmen, some of whom sided with his former student Skeletor. On the other hand, he was cruel to his men, often dropping them through trap doors. Hordak and Skeletor maintained a mutual enmity throughout the Filmation animated series. Only Imp was loyal to Hordak, and the pair were shown to have a close and trusting relationship.

According to the Wiki Grayskull, Hordak and his Evil Horde were introduced into Mattel’s Masters of the Universe toy line in 1985 to inject new blood into the line by introducing a new army of villains, as adversaries to both He-Man and Skeletor. Hordak is introduced in the minicomic “Hordak: The Ruthless Leader’s Revenge!”, packaged with his action figure, in which he returns from the dimension in which he was imprisoned to wreak vengeance on Skeletor while making his own attempts to destroy He-Man and conquer Castle Grayskull. His character is presented as a sorcerer who has now turned his attention mainly to science, and uses a combination of magic and science, but mainly the latter, in his attempts on Eternia. He apparently was involved in lots of events in Eternia’s past such as the building of The Three Towers, which is alluded to in some of the mini comics that came packaged with the action figures.

Motu Mexican Bootleg He Man And Skeletor Figures With Weapons
$14.99