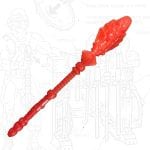 The Horde Trooper was from the Masters of the Universe toy line but was featured in the She-Ra and the Princess of Power cartoon. The Horde Trooper figure has a button on its Horde insignia that makes it “self-destruct” when pressed. Lots of play value with this because you could imagine him being shot or exploding. They come with a small staff, and you may also notice on some of them, their heads are pushed in a little. Most of them shared this feature and it is rare to have one with the entire helmet visible. During the cartoon they commonly do have higher placed helmets. With the toys it mainly has to do with protection to the barely attached head.

Horde Troopers are the mass army of soldiers of the Horde Empire. In the minicomics, Hordak produced Horde Troopers with a machine which extracted matter from the ground and transformed it into the perfect warriors. Relentless and nearly indestructible, they possessed one weakness—if struck in the center of their chest, they would fall to pieces. 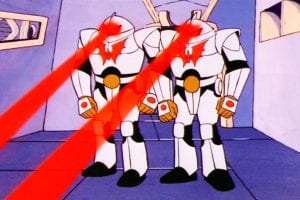 Though the Horde had its share of powerful and dangerous warriors, the Horde Troopers were a key factor in maintaining its dominance on Etheria, due to their sheer numbers. Early on in the Filmation POP series, it seemed as though the Horde Troopers were humans wearing armor, but over time, it became clear that they were robots. The Horde produced incredible numbers of them in factories set up across the planet.

The Horde Troopers were relatively easy to fool and could be disabled by exposure to water, but it was the Horde’s seemingly inexhaustible supply of them that proved the most serious challenge to the Great Rebellion. The Horde Troopers used a variety of armaments; most prominent was a long, baton-like device with a sphere at one end which produced powerful blasts of energy. Another was a rocket launcher.

Variations on the traditional Horde Trooper design existed, including an early bulkier version which Hordak used during his failed attempt to conquer Eternia. Another version was equipped with what appeared to be some kind of breathing apparatus and primarily served in a sailing capacity. Why the robots needed a breathing apparatus was unclear. Some Horde Troopers were equipped with jetpacks for aerial combat.

According to the Wiki Grayskull, Horde Troopers are foot soldiers of the Horde Empire. Although each trooper is individually unremarkable, in large numbers they are used to great effect in the occupation of Etheria by Hordak. Vast armies of Horde Troopers were also used during the Horde’s failed invasion of Eternia.

It is unclear whether Horde Troopers are humanoids wearing bulky armor, or robots. In their appearances in most media, the troopers are explicitly robots, so as to demonstrate the toy’s “self-destruct” feature. However, some episodes of She-Ra: Princess of Power have depicted them with names and feelings, treating them as bullies who enjoy tormenting innocents and fear Hordak’s disapproval; this behavior may be considered as unusual for machines, but actually, partially-emotional robots exists in the He-Man universe. Writers for the series presumably used whichever form was most convenient; expendable machines could be defeated more dramatically, whereas living people or high-level artificial intellect could be given more natural dialogue.

A couple of variations appear, such as:

Masters of The Universe Revelation He-Man Action Figure Set of 4
$36.00