In the Shadows of Mystacor: She-Ra and the Princess of Power Netflix Series Episode 7 Season 1 Review

Adora starts off this episode feeling like she “saw something” and has a feeling that someone or something is following her. Glimmer feels that Adora is on edge after their adventures in the previous episode where they found themselves running for their lives and fighting off Entrapta’s evil robots. Adora’s intuition serves her right as Shadow Weaver conjures up a large Shadow Spy to follow the Best Friends squad into the secret region of Mystacor in hopes Shadow Weaver can finally be the one that brings Adora back into the Horde fold.

Adora , Bow, and Glimmer enter the secret realm of Mystacor 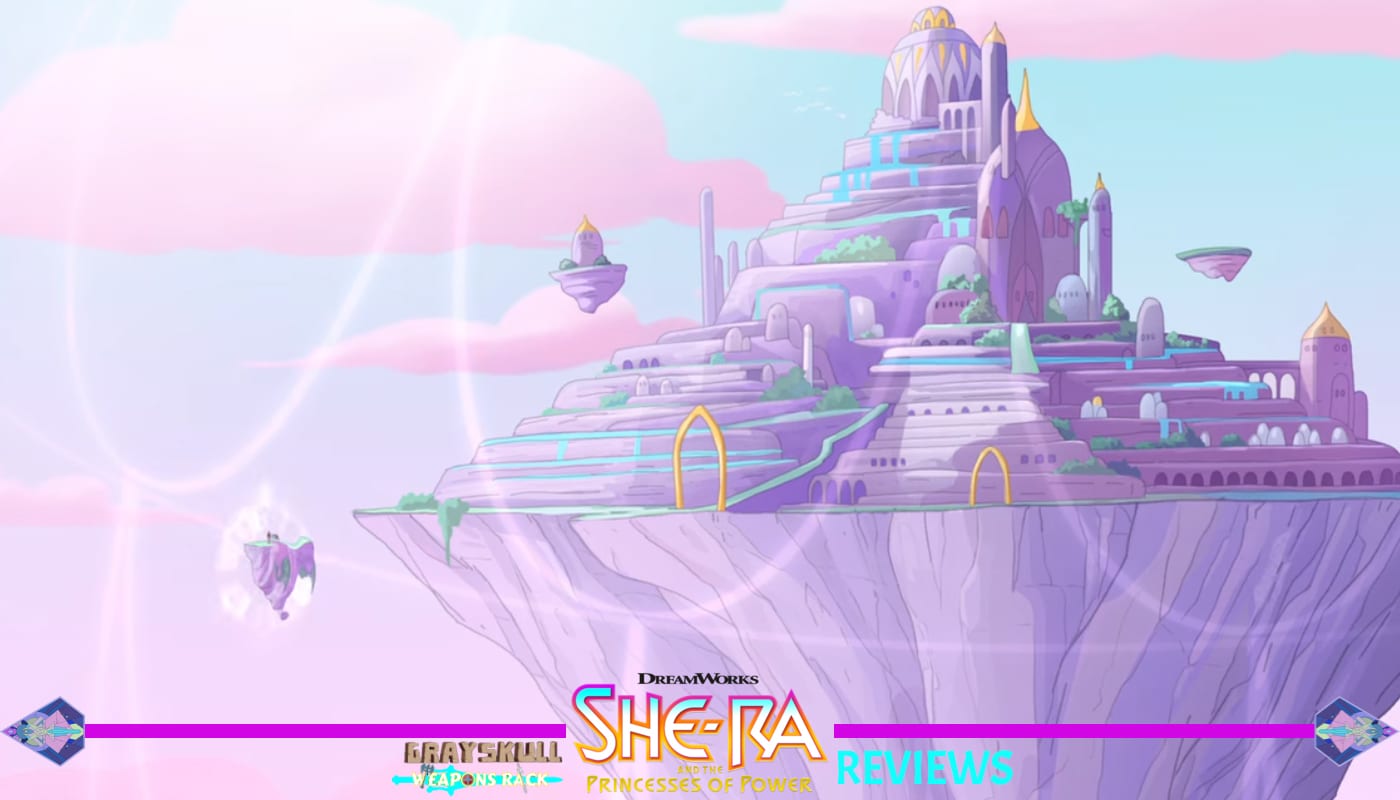 As Shadow Weaver continues her pursuit to bring Adora back to the Horde, the Best Friend’s squad head off to Mystacor for a much needed vacation. Unbenounced to them, Shadow Weaver is tracking the trio with a Shadow Spy, that takes the form of dark cloud with a red eyeball. The road to Mystacor is a secret one that has Adora, Bow, and Glimmer jumping off cliffs into puffs of clouds and riding rock platforms to finally enter the secretive floating kingdom that is home to all the sorcerers of Etheria and Glimmer’s Aunt Castaspella. As the trio get settled in Mystacor, Glimmer reveals that Adora is also an 8 foot tall warrior named She-Ra. Castaspella alludes to a ceremony happening in the Lunarium where Mystacor’s defenses get renewed by a monthly lunar eclipse.

Castaspella as she appears in the Dreamworks Netflix series vs. 1980’s Filmation cartoon 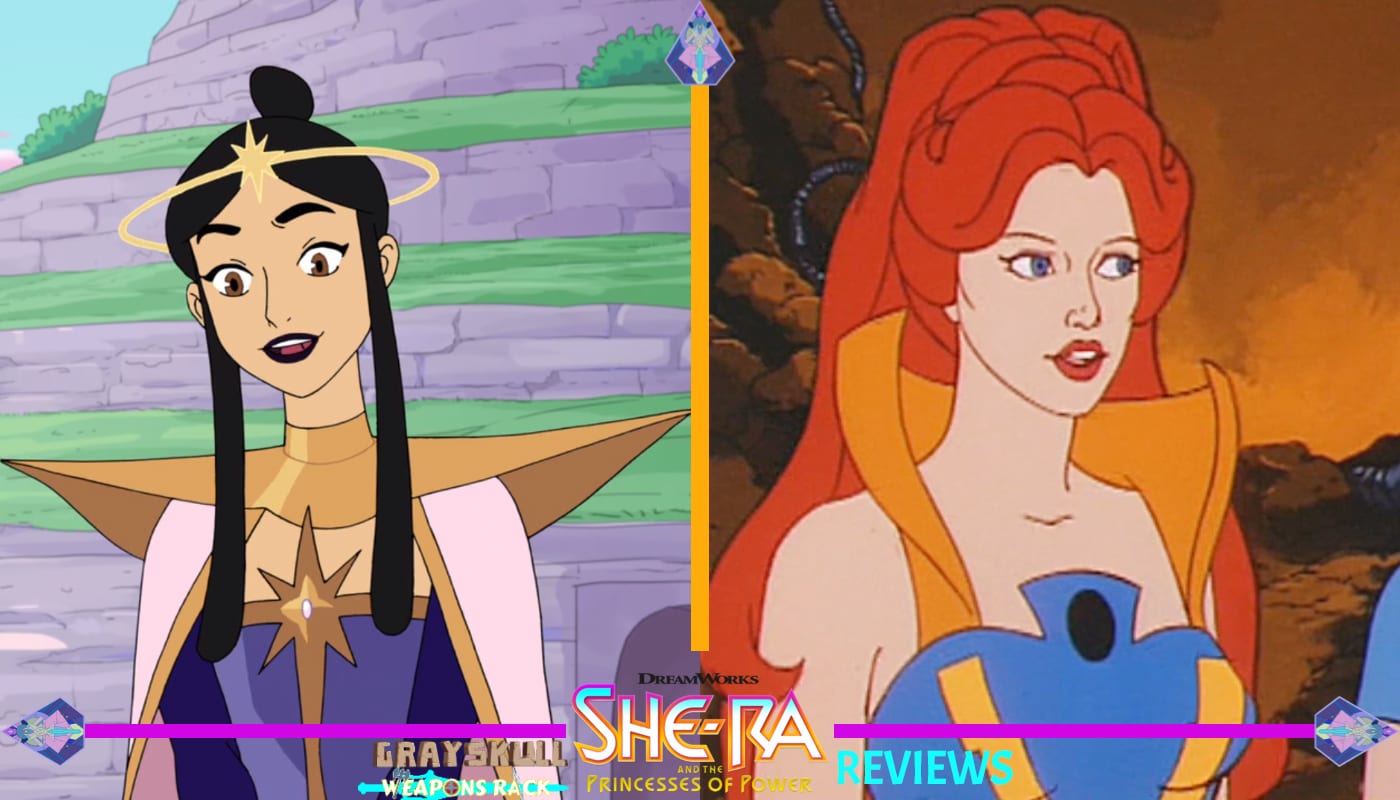 We get introduced to a new yet familiar character, Castaspella, who is the brother of King Micah and Glimmer’s aunt. Similar to her portrayal in the 1980’s Filmation cartoon, Castaspella is the queen of Mystacor and is a sorceress with great power. In sharp contrast to her Filmation rendering, Castaspella appears to be of East Asian decent and wears a long purple and pink dress with a gold crown with a star in the middle of it. Getting deeper into her character in the reboot, Castaspella is a doting aunt and a compassionate ruler. Glimmer feels like she is a little much as Castaspella tries to take on an overbearing, motherly type role when the Best Friends squad comes for a visit. As evidenced by Bow’s socks he is wearing, she loves making clothing for people.

Adora’s mind is playing tricks on her…or is it? 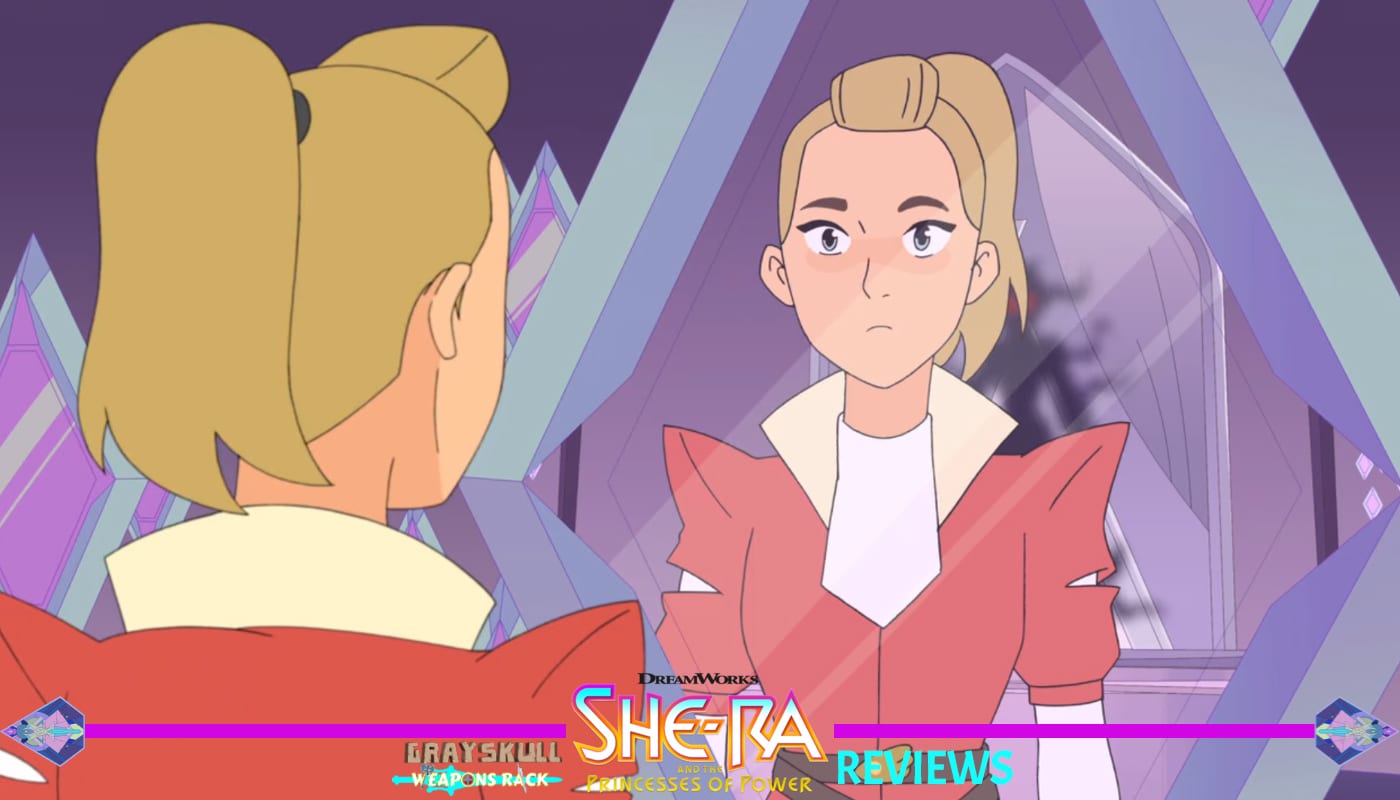 Using her magic to go after Adora, the Shadow spy infiltrates the kingdom of Mystacor as Adora tries to relax and forget about her past. We get a sense that Adora is either Type-A or just spooked by seeing visions of the Shadow Spy where ever she goes in Mystacor. She can’t take her mind off of the fact that she is being followed although her mind, or Shadow Weaver, is playing tricks on her. After getting a tour of the Lunarium, Adora is spooked and runs out of the Lunarium after seeing what appears to be a vision of a the Shadow Spy that has followed her into the secret realm.

Into the Hall of the Sorcerers of Mystacor 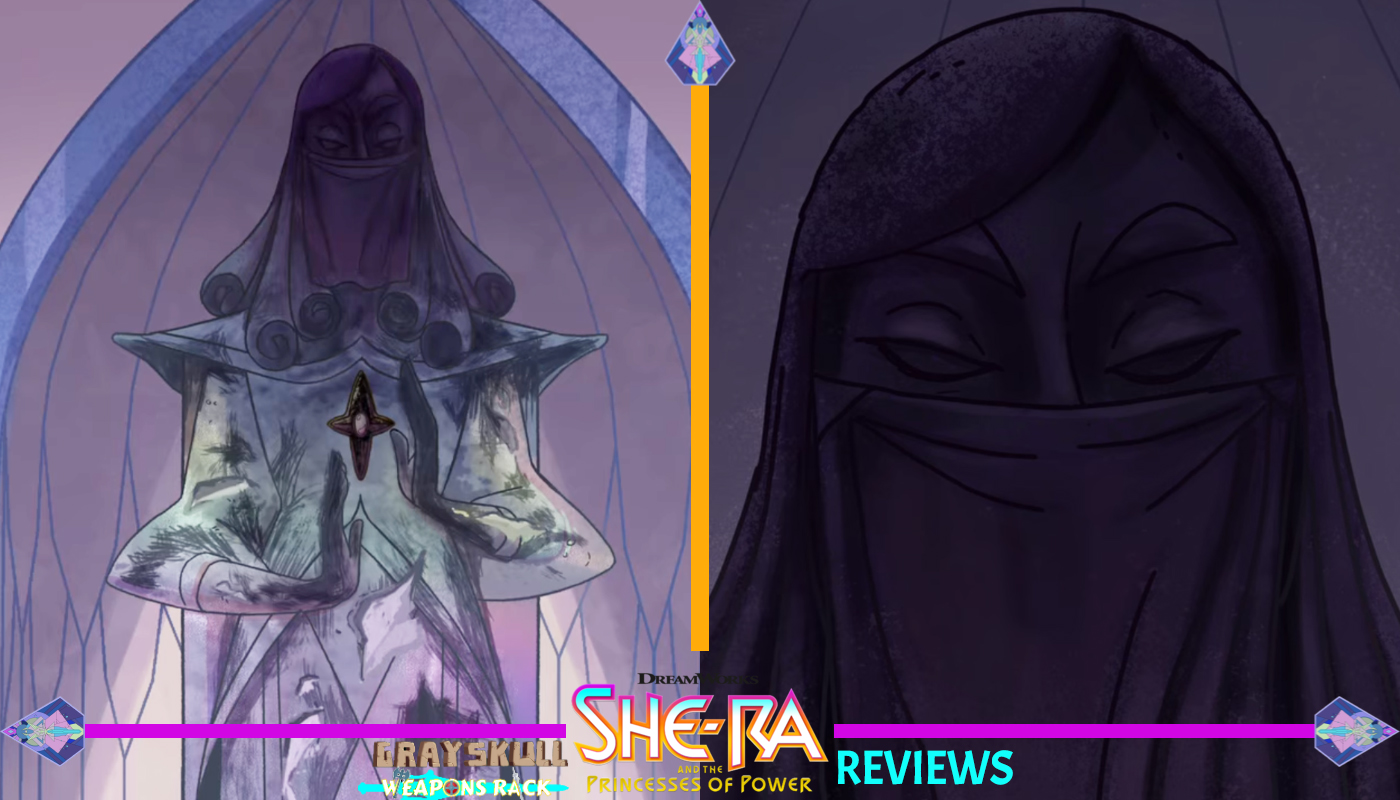 Adora’s quick exit from the Lunarium lands her in the great Hall of Sorcerer’s, an homage to great ones that have trained and are remembered. A particular statue catches Adora’s eye as we are introduced to a former Sorceress called Light Spinner, a woman who sought power and complete control above all else and was cast out of Mystacor. Castaspella spooks Adora even more as she tells a tale of Light Spinner never actually leaving the realm as she is biding her time to exact her revenge on the people of Mystacor, contributing to Adora’s anxiety and fear. 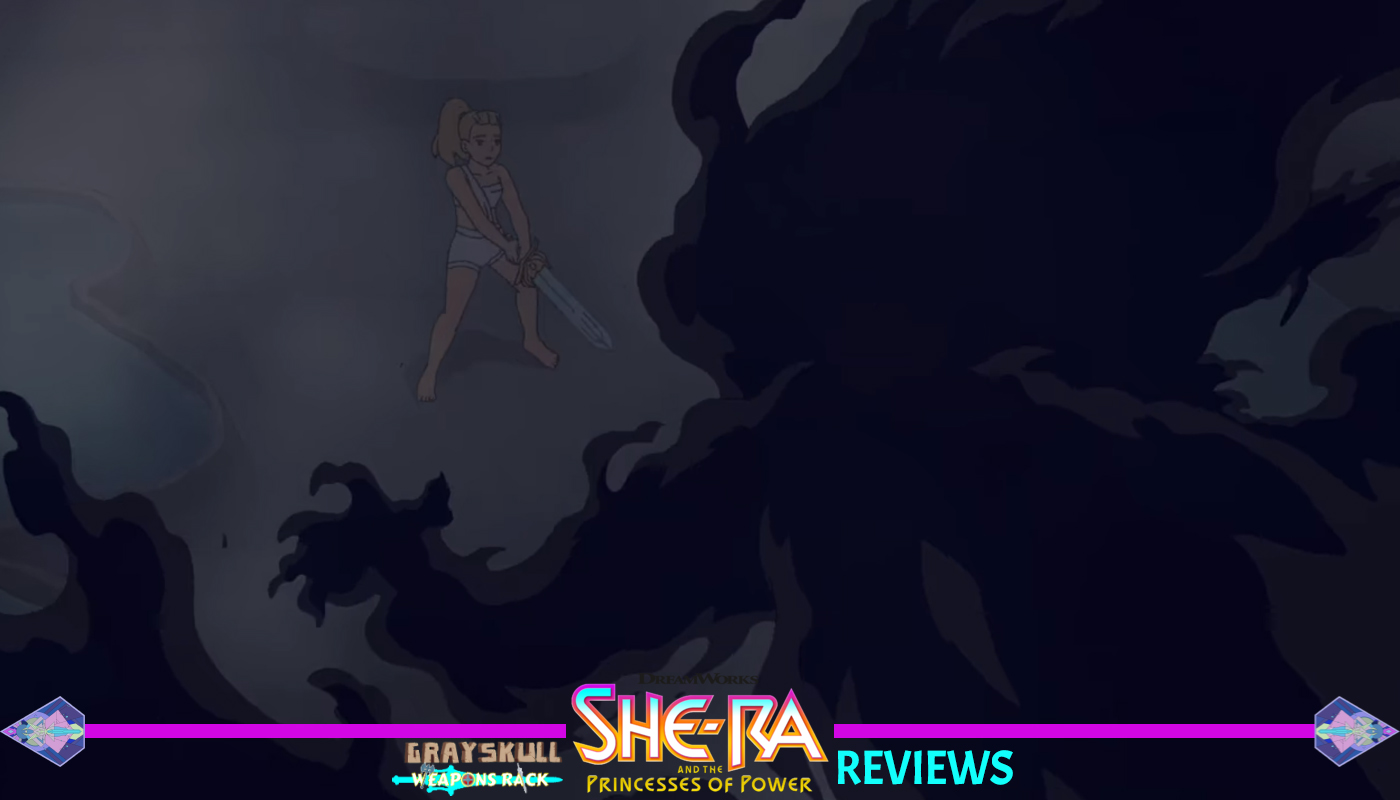 Hoping to take Adora’s mind off of everything, they head to the beach as Shadow Weaver ups the ante by proclaiming “it is time for something more” as the Shadow Spy takes on a more material form to hunt down Adora. As Adora lies on the beach, her anxiety gets the best of her so Glimmer takes them to their next level of relaxation and brings them to the steam grotto, pools filled with magical minerals that the Sorcerers use to cleanse themselves of worry and fear. Gillmer encourages Adora to clear her mind in more of a meditative sense to induce her into a state of relaxation. As Adora falls asleep, she is startled awake by Shadow Weaver’s omnious voice as “Adora” echoes through the grotto, spooking Adora even more as she gets her Sword of Protection out to fend off the shadow that has been following her.

She-Ra sees a vision of Hordak in the Lunarium 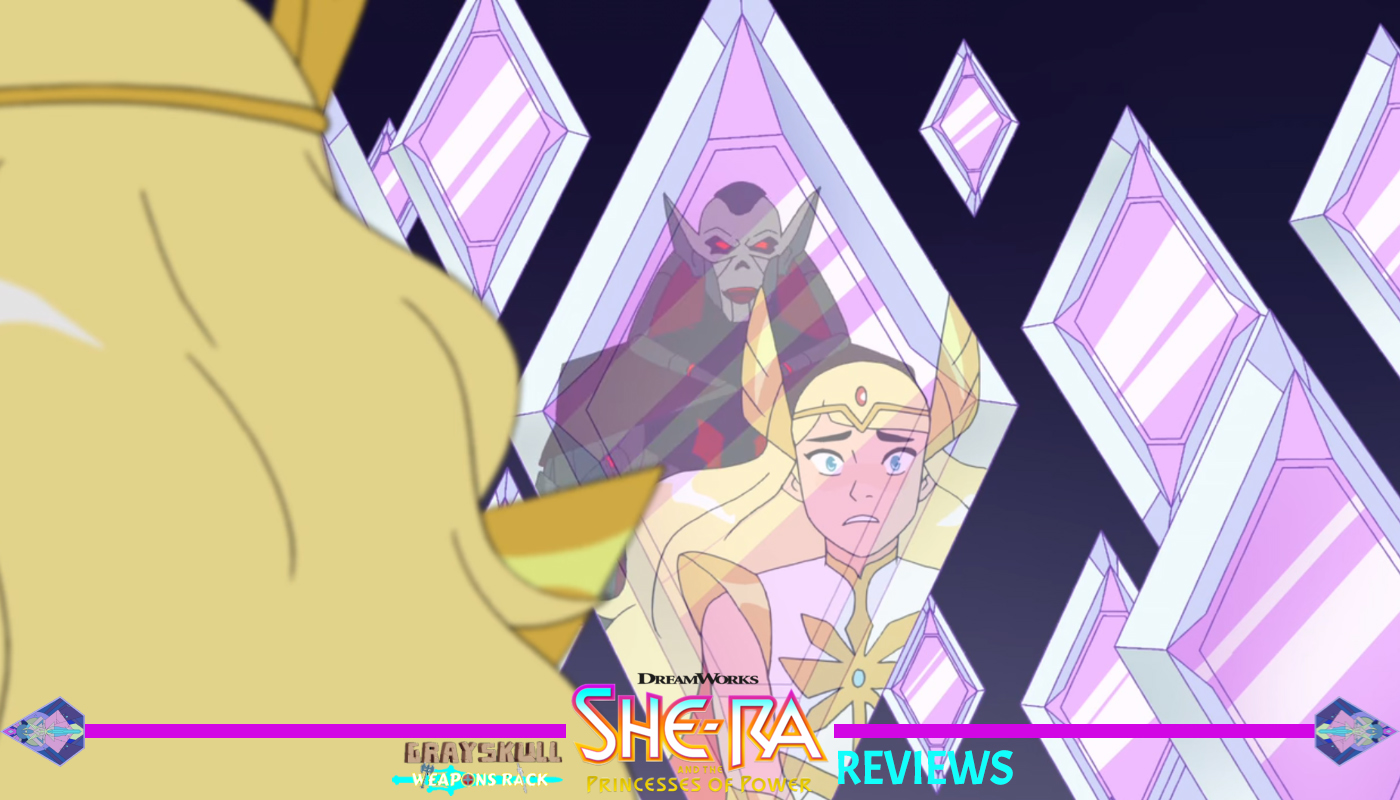 Continuing to see and now hear Shadow Weaver throughout her visit to Mystacor, Adora finally transforms into She-Ra to take on the shadows that have been haunting her visit. Finding herself back in the hall of sorcerers, She-Ra hears the voice of Catra as it tells her that Shadow Weaver has always controlled them both. Chasing down the voice of Catra, She-Ra is now in the Lunarium, where she hears the familiar, sinister laugh of Hordak. She-Ra listens intently as the vision of Hordak explains his disappointment in her and tries to belittle her contribution to ridding Etheria of the evil Horde.

Castaspella is appalled to find shattered crystals in the Lunarium

As the voice materializes into a reflection inside one of the crystals, She-Ra’s fear gets the best of her as she ends energy blasts hurdling throughout the Lunarium, destroying the crystals inside the room. To Castaspella’s dismay, she discovers what She-Ra has done and sharply rebukes her behavior as she tries to make sense of what she is seeing. Transforming back to Adora, she is visibly shaken about what she had just done. Castaspella goes on to say that Adora had destroyed a thousand years of writing while nearly destroying the lens that protects Mystacor. Glimmer and Bow arrive on the scene and defend Adora but Castaspella is too angry and hears nothing as she runs out of the Lunarium. Pleading with Adora to get some rest, Bow convinces Adora that the Horde is not in Mystacor and that she needs some rest.

Adora runs into some familiar faces but looks can be deceiving 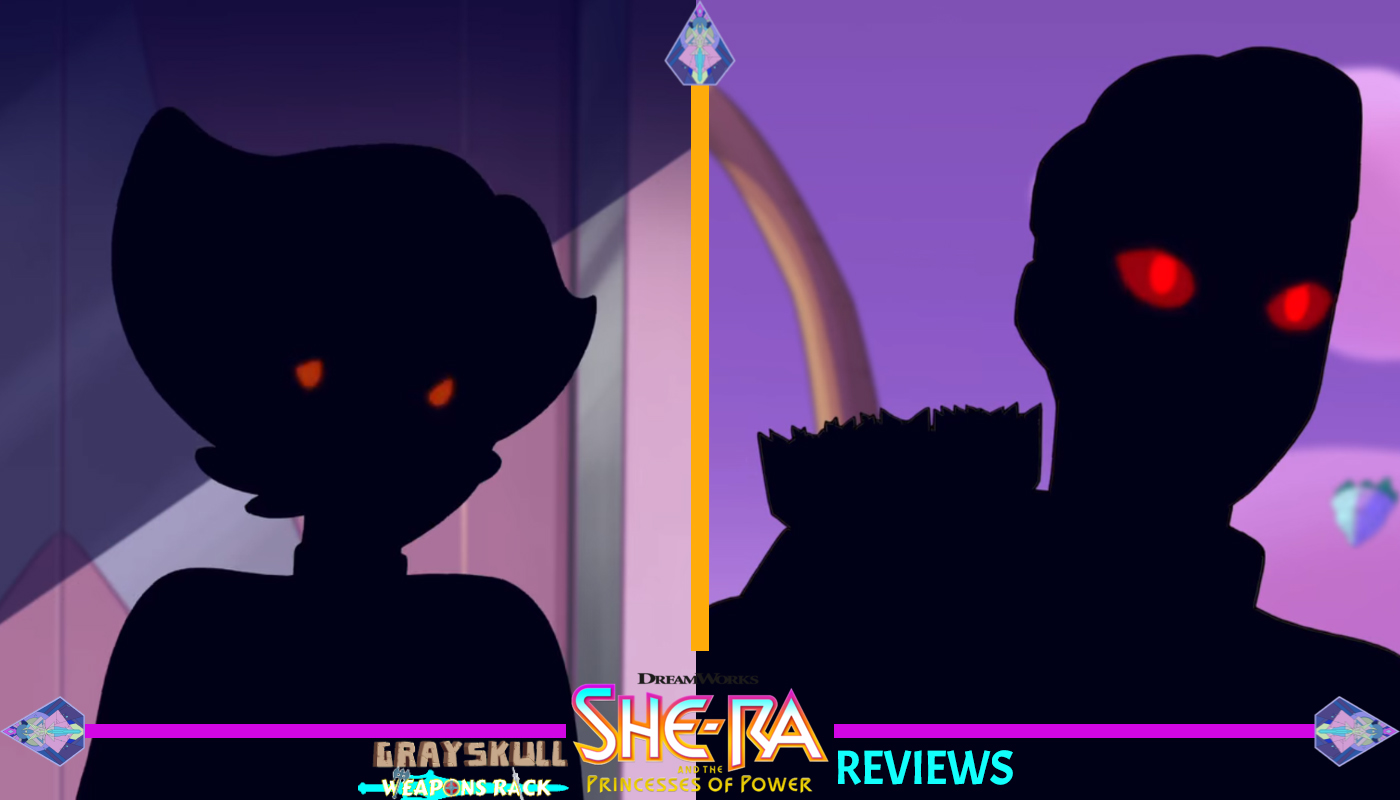 Struggling to sleep, Glimmer, or what appears to Glimmer, scolds Adora proclaiming that friends do not do this type of thing. We learn that this is not actually Glimmer but Shadow Weaver’s plot to drive Adora away from Mystacor by making her feel bad that her friends are starting to turn on her because of her behavior. She runs into a similar situation with Bow as Shadow Weaver again takes his form and scolds Adora for destroying the crystals in the Lunarium. Feeling horrible, Adora almost flees Mystacor in disgust with herself but she hears screams in the distance and goes to check it out.

Shadow Weaver reveals herself and her intentions

As she enters the Lunarium, Adora is shocked to see her friends and Castaspella injured on the ground. Shadow Weaver finally reveals herself as Adora tries to flee the dark magic that is before her. Shadow Weaver tells Adora that the eclipse is almost over, bringing the shield that protects Mystacor down. She goes on to tell Adora that the Horde will conquer Mystacor and that Adora will return home to her. As Shadow Weaver explains to Adora that she should not help these people, she reveals that she was Light Spinner and goes on to say that they feared her dark power and that they will never accept Adora. Using psychology on Adora, Shadow Weaver tells her that she is a ruthless warrior and that the Princesses do not care about her. 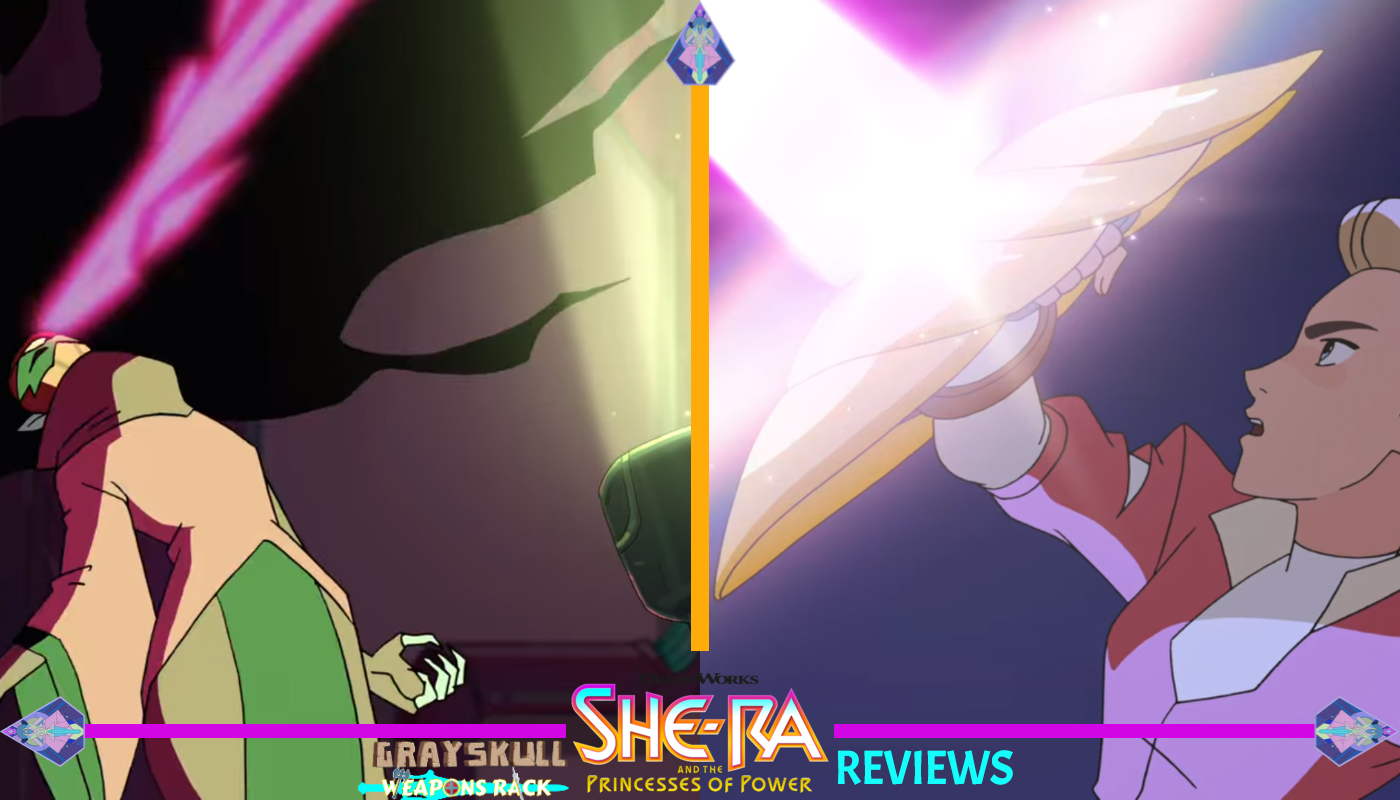 Hearing enough, Adora tries to transform into She-Ra but can’t so she picks up the Sword of Protection and transforms it into a shield that channels the power of the eclipse and points it in the direction of Shadow Weaver. The energy from the eclipse proves to be too much for Shadow Weaver as Adora fights her back and proclaims that Shadow Weaver is not going back and that Shadow Weaver does not have power over her anymore. Adora rids Shadow Weaver’s form from Mystacor as the energy is charged into the crystal on her forehead, beating her back and causing her to relinquish control of her shadow form as she falls to the ground back at the Fright Zone. As she defeated Shadow Weaver, the eclipse is allowed to recharge the crystals of Mystacor, saving the kingdom from Horde control and restoring the invisible shield that protects it.

This is the first episode in the series that started to go into the deep dark psyche of Adora (the protagonist) and Shadow Weaver (the antagonist). Shadow Weaver relied solely on mind games for the first half of episode and I have to say that if you have a feeling that someone is watching you or if you feel a presence from something you don’t understand, it can really mess with your head. This episode did another great job at introducing another kingdom to expand the footprint that is Etheria. Castaspella played an important role in the 1980’s Filmation cartoon and she plays another pivotal role here as the keeper of the Sorcerers and protector of the Mystacor Kingdom. One aspect I continue to enjoy is the deep character development and Castaspella, as well as Shadow Weaver, had some meaningful angles uncovered. For example, we learned that Shadow Weaver (aka Light Spinner) was cast out of Mystacor as a proverbial fallen angel who succumbed to the temptations of dark magic and the lust for power but it is still a mystery to the people of Mystacor what actually happened to her. As for Castaspella, it is great to know that she is the is the sister of King Micah and there seems to be some healthy competitive tension between her and Queen Angella. In addition to the deep development of the characters and the plot lines, this is also an episode of redemption for Adora as she defends Mystacor from the evil forces of Shadow Weaver and proves her loyalty yet again to the Rebellion.

Masters of the mystic arts

I feel that the tone of this episode draws from the Marvel Cinematic Universe as Mystacor reminds me of Kamar-Taj, the home and training grounds to the Masters of the Mystic Arts in the movie Dr. Strange. In Dr. Strange. Once a brilliant neurosurgeon who suffered a horrific car accident leaving his hands crippled, Stephen Strange became a powerful sorcerer and Master of the Mystic Arts. The people of Mystacor have a similar training grounds as the people there conjure magic using their hands, as in the Dr. Strange movie. Similar to Adora fighting back and defeating Shadow Weaver in this episode, Dr. Strange discover magic and alternate dimensions where he focused the healing of his hands in hopes of saving his neurosurgery career, Strange learned the mystic arts and helped prevent Kaecilius,  a sorcerer and a former member of the Masters of the Mystic Arts who became disillusioned with power, from over throwing the Ancient one, ultimately saving the universe. 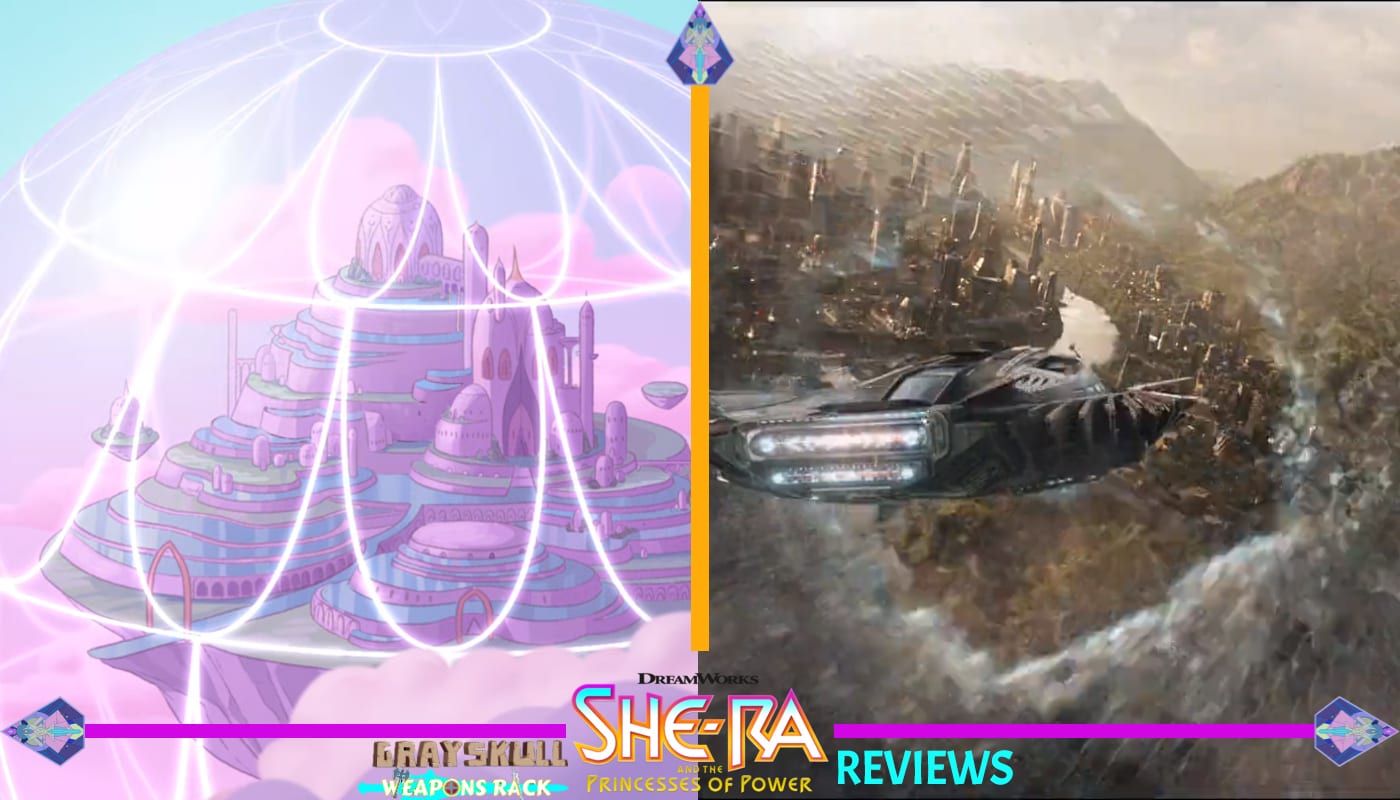 Keeping with the MCU theme, we see a similar barrier protecting Mystacor as the one we see in the Black Panther movie protecting the hidden land of Wakanda, a region in Africa colonized by five tribes. As a result of a meteor enriched with the most powerful material on Earth, Vibranium, the region of Wakanda remained secret to the outside world until the people of Wakanda were forced to make their region and presence known in order to save the world. Mystacor remains protected by a similar invisible barrier as the one found protecting the land of Wakanda.