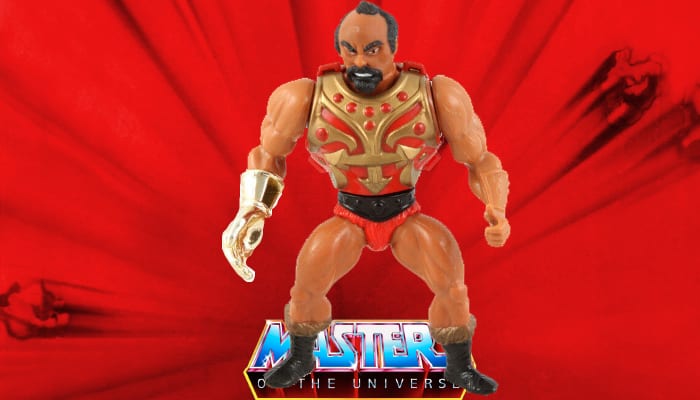 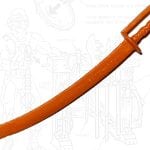 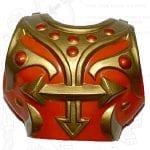 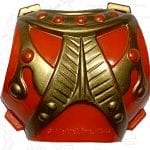 Jitsu from the Masters of the Universe original series toy line.

Jitsu, like Fisto, has a metal right karate chopping hand. It’s interesting that his character was made into an action figure as he appeared only once in “The Dragon Invasion” episode in 1983. He was commissioned by Skeletor in an invasion of Castle Grayskull and briefly displayed his abilities in the cartoon. Appearing in only a single episode of the Filmation animated series, Jitsu was an obedient and nondescript henchman for Skeletor. He came out on the wrong end of a confrontation with Ram Man.

Jitsu as he appeared in the Masters of the Universe Cartoon 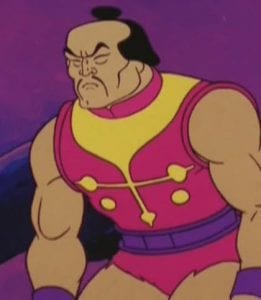 When his figure was released he was promoted as the “Evil Master of Martial Arts” and was widely seen as a rival to the heroic character Fisto, released in the same wave, based upon the similarity of their designs; both had spring-loaded right arms. However, although the mini-comic “The Clash of Arms”, packaged with both their figures, hints loosely at some kind of rivalry between them, no media ever produces any official backstory between the two characters. Many comics and storybooks ignore the idea of any connection between them altogether, leaving fans to only guess at what the connection between the two characters may be.

Aside from a couple of figures released later in the toyline, Jitsu is one of the least-featured characters of the entire franchise. Even most storybooks and comics give the character only minor roles at most, such as in his two other minicomic outings (Hordak: The Ruthless Leader’s Revenge! and Mantenna and the Menace of the Evil Horde!) and he is never given an official origin or any real character development. It is possible that this character’s underexposure may relate to the fears of racial stereotyping that led him to be mostly excluded from the cartoon.

Portrayed as an expert martial artist in the minicomics, Jitsu delivered vicious karate chops to his enemies with his massive golden right hand. Jitsu was stealthy and enjoyed sneaking up on unwary opponents.

According to the Wiki Grayskull, Jitsu was introduced into the Masters of the Universe toy line as part of the third series of figures in 1984. However, he made his debut on the cartoon a year earlier, in one of the show’s earliest episodes, “The Dragon Invasion”. An early intention of the cartoon was to promote upcoming figures, and Jitsu is a prime example of this. The figure was still in the development stage at the time of this episode, therefore his appearance is slightly different: his right hand seemingly being made of flesh rather than gold; although it should be noted that even with released figures, the Filmation versions sometimes differed slightly in appearance. The character’s name in the series bible is Chopper,[1] although he is never called this (or any other name) on-screen. His role in this episode is a mere background appearance, accompanying Skeletor and his minions in an invasion of Castle Grayskull. Not only is his name never mentioned, but he only has one line and aside from a brief display of his karate-chopping abilities, is given no development whatsoever. He is never featured in the series again, even after his figure finally hit the market, due to the producers’ fears that he would be perceived as a racial stereotype.[2]

Masters of The Universe Revelation He-Man Action Figure Set of 4
$25.00