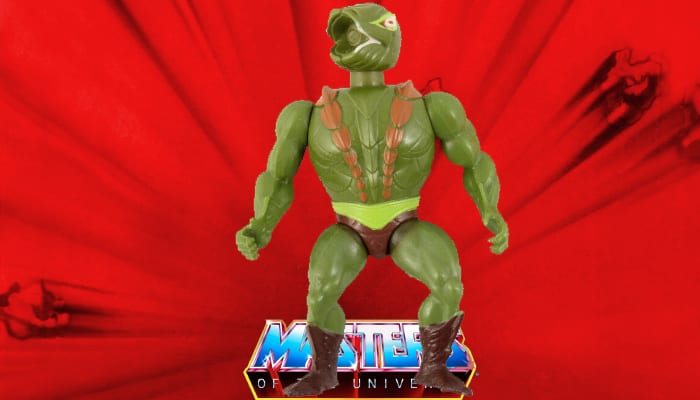 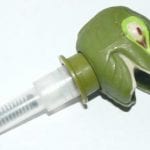 Kobra Khan was introduced as one of Skeletor’s evil warriors but I would not classify him as a henchman. His main asset comes from his cobra’like hood spraying sleeping gas on his unsuspecting foes. The toy mimicked this ability using a mechanism that converted water to vapor by pressing down on his head. 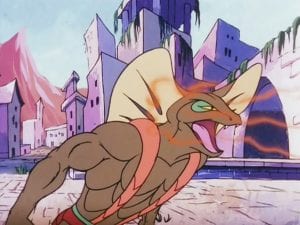 A member of the snake-like Reptons, Kobra Khan was one of Skeletor’s most dependable henchmen. Often paired with Webstor, he enthusiastically volunteered to carry out the schemes of Skeletor or Evil-Lyn. His sleep-inducing venom could render his foes unconscious for hours, though Khan himself was also susceptible to its effects. He could stretch his arms to incredible lengths, using them to hold his enemies captive, and could fire a beam from his eyes powerful enough to vaporize a tree. 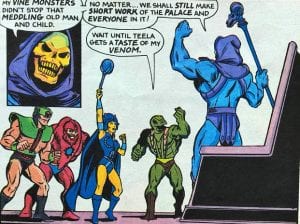 Kobra Khan was a descendant of the legendary Snake Men and commanded a group of Lizard Men in the minicomics. He was green in color and resembled a humanoid serpent. When Skeletor freed King Hiss from his prison, he sent Kobra Khan to spy on the leader of the Snake Men and serve as a double agent. In this way, the duplicitous Khan could report Hiss’s plans to Skeletor. Kobra Khan could spit a deadly venom and eventually acquired the ability to spit a sleep-inducing mist. He could sometimes be seen alongside his fellow Evil Warrior Webstor.

According to the Wiki Grayskull, Kobra Khan appears on the cartoon shortly after his figure was released. He is one of the few Evil Warriors on the cartoon to be portrayed in a darker, more serious manner as opposed to being used for comedy value. He is usually paired with Webstor and the two of them are often seen to work as a duo. They are first paired in the episode “Disappearing Dragons” which portrays Khan as the leader of the two. He is portrayed as a sly, scheming and sullen character, capable of taking on numerous opponents at once with his sleep mist. Never fearful or bumbling around the Heroic Characters, his low, whisper-like, hissing voice provided by Lou Scheimer enhances the portrayal of him as a reserved and sinister character.

In the episode “The Good Shall Survive” he demonstrates the power to elongate his arms to grasp his opponent before spraying them, while the final produced episode of the series, “The Cold Zone”, focuses exclusively on Kobra Khan and his race, the Reptons. We learn in this episode that the Reptons inhabit a quiet underground kingdom beneath a stone pyramid, and are a peaceful race who regard Khan as a traitor since he left them to join Skeletor’s forces. The plot features Khan seeking the help of He-Man and his companions in relighting the furnace that heats the Reptons’ kingdom, which has been extinguished by an unknown intruder. As the plot unfolds, it turns out that it was in fact Khan who extinguished the flame, and the Repton’s ruler, King Pythos, has offered to grant the crown of the Reptons to whoever can expose the guilty party. Therefore, Khan has concocted an elaborate scheme to frame He-Man for the crime so that he can become ruler of the Reptons upon exposing He-Man as guilty.

Other members of the Reptons seen in this episode are King Pythos, an unnamed Chancellor, and the court jester, Scales, who reveals Khan as the true criminal. Although this episode was made long before the idea of the Snake Men was conceived by Mattel, it is generally considered by fans that the Reptons are a sub-division of the Snake Men who were permitted to remain on Eternia after defecting from the side of King Hiss.

Masters of The Universe Revelation He-Man Action Figure Set of 4
$36.00