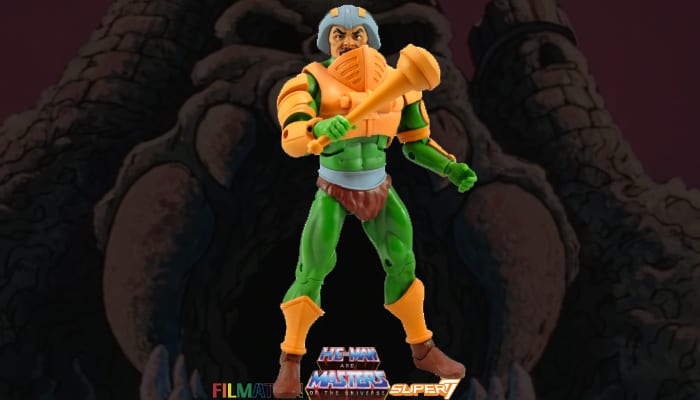 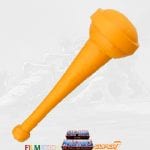 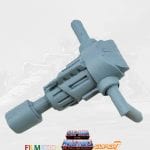 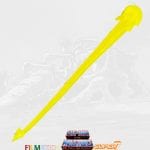 Man-At-Arms action figure from the Filmation Super7 Masters of the Universe toy line.

Duncan, more commonly known as Man-at-Arms, is at the forefront of the defenses of the kingdom of Eternos, providing a wealth of highly-advanced devices and vehicles for use in defending Eternia. He is a loyal servant to King Randor and Queen Marlena, mentor and confidant to Prince Adam, and the adoptive father of Teela the daughter of the Sorceress. With his intelligence, incredible mechanical skill, and fatherly guidance, Man-at-Arms is one of the most valuable and beloved members of the Heroic Warriors. 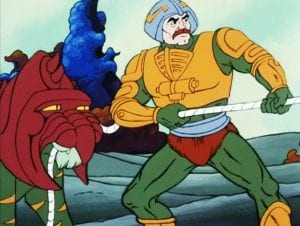 The Filmation MOTU animated series further fleshed out the character of Man-At-Arms. Duncan was taught by an intellectual named Rohad in his youth. The young man’s eagerness often caused his projects to malfunction, prompting Rohad to teach Duncan patience. As Eternia’s Man-At-Arms, Duncan was in charge of the kingdom’s defenses, especially at the Royal Palace. A master of invention, he could create or repair nearly any kind of machine. King Randor often turned to Man-At-Arms for advice and relied on him to summon He-Man whenever the kingdom was in danger. Man-At-Arms invented and built many of the weapons and vehicles used by He-Man and the other Heroic Warriors. Though Man-At-Arms shared a father-son type of relationship with Prince Adam, he and He-Man fought alongside one another as comrades. Adam would often come to him for advice and guidance.

Man-At-Arms was one of the few people who knew that Adam and He-Man were one and the same. When the Sorceress gave birth to Teela, she asked Man-At-Arms to raise her daughter. Sworn to conceal her mother’s identity, Man-At-Arms gave Teela love, guidance, and training. He watched with fatherly pride as she became one of Eternia’s bravest warriors. Man-At-Arms carried many weapons, gadgets, and tools with him. Among these were bolas, a grappling-hook crossbow, a freeze ray, a laser, a tether line, and a laser sword. With his inventiveness, mechanical skill, and fatherly guidance, Man-At-Arms was one of the most valuable and beloved members of the Heroic Warriors. 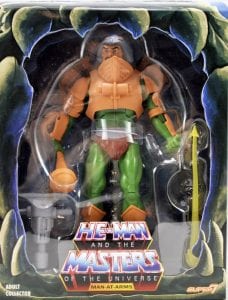