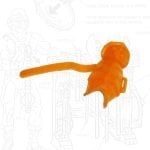 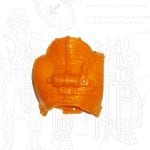 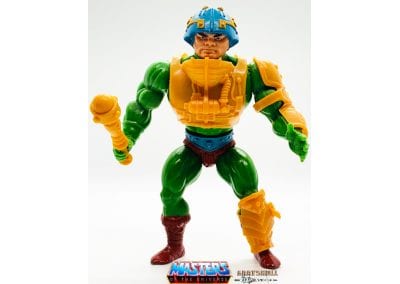 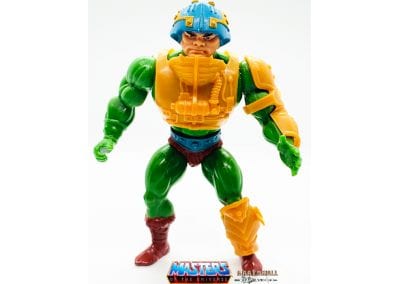 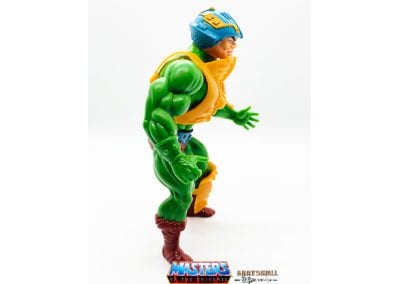 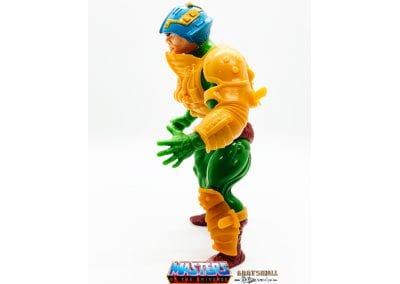 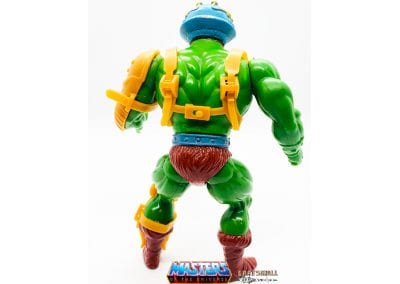 Man-At-Arms ( aka Duncan) is a master of weapons and the technology guru to the Kingdom. He is skilled in robotics, mechanics, fluid dynamics, physics, and other forms of technology. He is the father of Teela and is one of the three kept to secrecy about Prince Adam’s alter ego, He-Man. Man-At-Arms wears yellow armor and is portrayed in the original cartoon series wearing a mustache although the 1982 version of his figure did not sport one. It wasn’t until the modern 200x series where Duncan finally dons the facial hair he is widely known for. 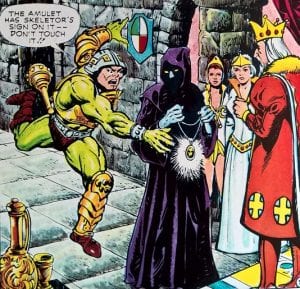 In his earliest depictions, Man-At-Arms was a famed weapons master whose people were renowned for their mastery of all armaments. He was a loyal ally to He-Man and the warrior-goddess Teela. Man-At-Arms was ever at the ready to assist in battle against Skeletor and his evil minions. The Master of Weapons wore remarkable protective armor which featured complex technological components. In one instance, this armor saved his life when he took an otherwise deadly fall from the airborne Wind Raider. Man-At-Arms often rode a Battle Chariot armed with a flame-throwing weapon.

The Filmation MOTU animated series further fleshed out the character of Man-At-Arms. Duncan was taught by an intellectual named Rohad in his youth. The young man’s eagerness often caused his projects to malfunction, prompting Rohad to teach Duncan patience. As Eternia’s Man-At-Arms, Duncan was in charge of the kingdom’s defenses, especially at the Royal Palace. A master of invention, he could create or repair nearly any kind of machine. King Randor often turned to Man-At-Arms for advice and relied on him to summon He-Man whenever the kingdom was in danger. Man-At-Arms invented and built many of the weapons and vehicles used by He-Man and the other Heroic Warriors. Though Man-At-Arms shared a father-son type of relationship with Prince Adam, he and He-Man fought alongside one another as comrades. Adam would often come to him for advice and guidance. Man-At-Arms was one of the few people who knew that Adam and He-Man were one and the same. When the Sorceress gave birth to Teela, she asked Man-At-Arms to raise her daughter. Sworn to conceal her mother’s identity, Man-At-Arms gave Teela love, guidance, and training. He watched with fatherly pride as she became one of Eternia’s bravest warriors. Man-At-Arms carried many weapons, gadgets, and tools with him. Among these were bolas, a grappling-hook crossbow, a freeze ray, a laser, a tether line, and a laser sword. With his inventiveness, mechanical skill, and fatherly guidance, Man-At-Arms was one of the most valuable and beloved members of the Heroic Warriors.

According to the Wiki Grayskull, In the 1980s animated series, Duncan is an inventor, soldier and Teela’s foster father, as well as a mentor to Prince Adam. The Sorceress of Castle Grayskull asked Man-At-Arms to adopt Teela because she felt she could not raise her daughter and protect Castle Grayskull at the same time, begging: “Please, take care of my daughter.” Man-At-Arms complied: “She will always be safe with me for as long as I live.”

Man-At-Arms wears armor which is slightly different from that of the standard uniform of the royal guards. His mustache was not present on the original figure (which was also beefier and more menacing), having been added by Filmation to make him look older, wiser and more fatherly. Man-At-Arms has an understanding, fatherlike voice. He is often pestered by court jester Orko, the Orko’s magic tricks often backfire directly at him. Duncan is also one of the three people who know He-Man’s secret identity, as explained in the introductory sequence of the cartoon. Also, Man-At-Arms knows that Adam’s twin sister Adora is She-Ra.