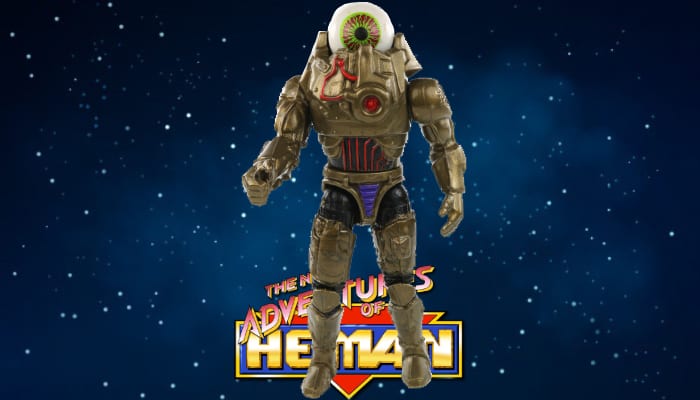 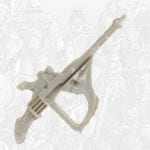 Optikk is from the 1990 New Adventures of He-Man toy line. He is an evil space mutant with a giant eyeball for a head. He has a spacesuit and has a flywheel on the figure’s back that will make his eye look from left to right. He also has a spring loaded arm arm and will perform a fast draw action with his gun when it is pulled down. He came with the following accessory:

Optikk is a background character in the TV series, often acting as a reconnaissance agent for the mutants, he is also the navigator of the Mutant Mothership and has his own console on the bridge. His armor is darker than the one seen in the figure and minicomics.

Optikk is granted some extra abilities by his giant eye, he can apparently use it as a sensor, being able to tell that the Galactic Guardians were on the bridge of a ship the Mutants raided from some distance away, as shown in the flashback episode The Galactic Guardians. Due to his large eye, Optikk sometimes found himself the subject of Skeletor’s jokes, e.g.: “There’s more here than meets the eye, no offense Optikk” in The Call to the Games, although Optikk never took any offense. Optikk did appear angry at the suggestion he couldn’t see properly, like in The Seeds of Resistance. Although also appears to be a good pilot, although not often seen in a pod, on The Games he did manage to take out Spinwit while working with Hoove, and presumed he had killed the Galactic Guardian.

Optikk appears to get on well with his fellow Mutants, Crita once told him to stay out of a mutiny staged by Staghorn, telling him to let them to battle it out. Optikk listened at first, but did eventually join Staghorn’s mutiny, bringing a Terrorclaw from the docking bay to help them get onto the sealed off bridge. Optikk seemed fairly intelligent, although occasionally was prone to goofy accidents.

When the Mutants went up against the Galactic Guardians in ‘The Games’ near the end of the series, Optikk received a weapons upgrade from Yolt, the Blacksmith of Crelus. He was given new armor and a deadly missile launcher which was attached above his eye, increasing his aim. He used this to great effect during the games, where he took an active role thanks to his powerful new weapons.

Although seen often, many of Optikk’s appearances were little more than non-speaking cameos. When Optikk did appear, he didn’t usually have many lines, often remaining an ominous figure in the background. However, his role was expanded after his upgrade, and even began arguing with Slush Head like his minicomic self.