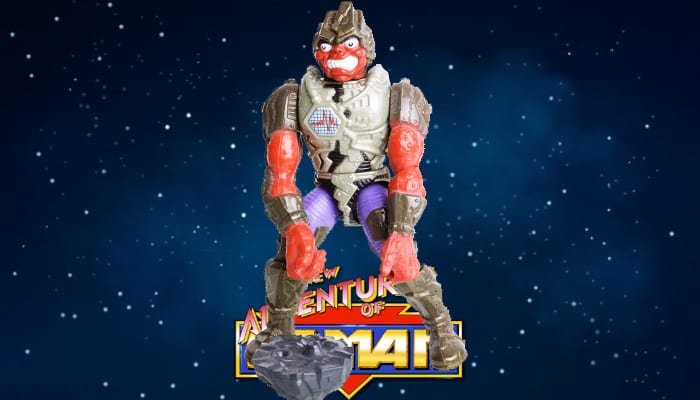 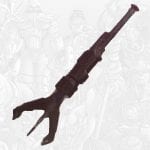 Quakke is an Evil Space Mutant with a red body and is from the 1991 New Adventures of He-Man toy line.. He has a lever on his back that allows him to raise his weapon high and when released, it slams it down, shattering the meteor in two. He came packed with the following accessories:

Quakke frequently appears in the TV series. He first appears in the episode Sword & Staff to deliver Skeletor’s new pet, Grr. Having introduced Skeletor to the ferocious little creature, Quakke assumed like the others Skeletor would be unable to control it, but was soon proven wrong. That same day, Quakke helped Skeletor track down Grr after he went missing, and the two stumbled upon a hidden crystal chamber, and Skeletor, wishing to test the crystal’s power, used Quakke as a test subject. Quakke was transformed into a far more powerful version of himself, but equally lost most of his personality. After being sent to attack the Galactic Guardians on Denebria, who were saved by Sagitar, Quakke reverted back to his normal self. Skeletor later uses the same crystal to become “Disks of Doom Skeletor”.

While by no means a genius, Quakke is more intelligent than some of the other Mutants. Quakke is usually paired up with his fellow Mutant Butthead (known as BH in the cartoon), and as the two seem to get on well and form an effective duo in battle. They are most frequently used as henchmen by Skeletor when he is on missions away from the Mothership. Quakke has also worked with Skeletor on his own, like in The Youngest Hero. He has a respect for both Flogg and Skeletor, and is often looking to grow more powerful within the Mutant ranks, once joining Staghorn in a mutiny against Flogg during Mutiny on the Mothership after being promised the position of Co-Pilot of the Mothership, and thus, second in command of the Mutants.

Like most other Mutants,Quakke also has a station of his own on the bridge of the Mothership.He took an active role during the Mutant occupation of Primus, trying to track down He-Man in He-Man in Exile.