Razz: She-Ra and the Princess of Power Netflix Series Review 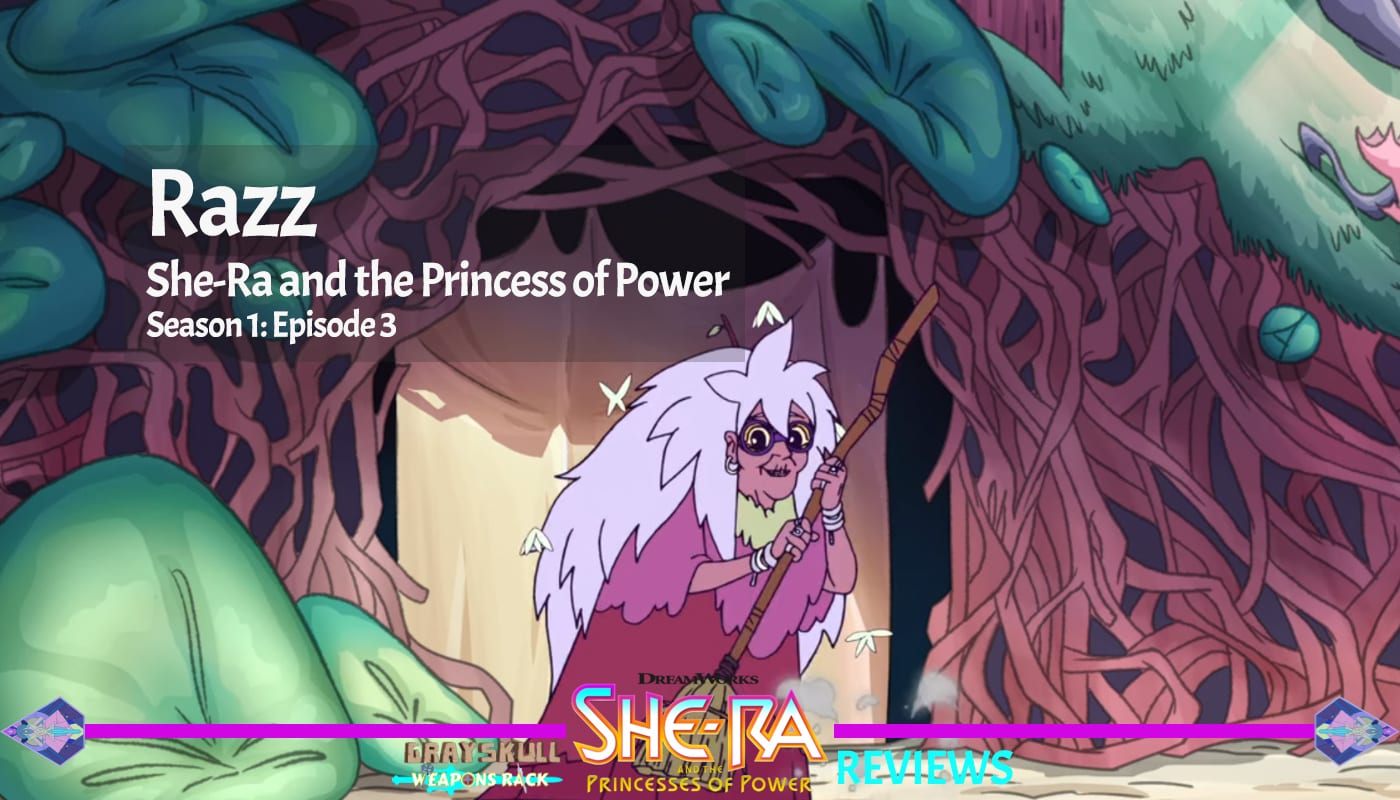 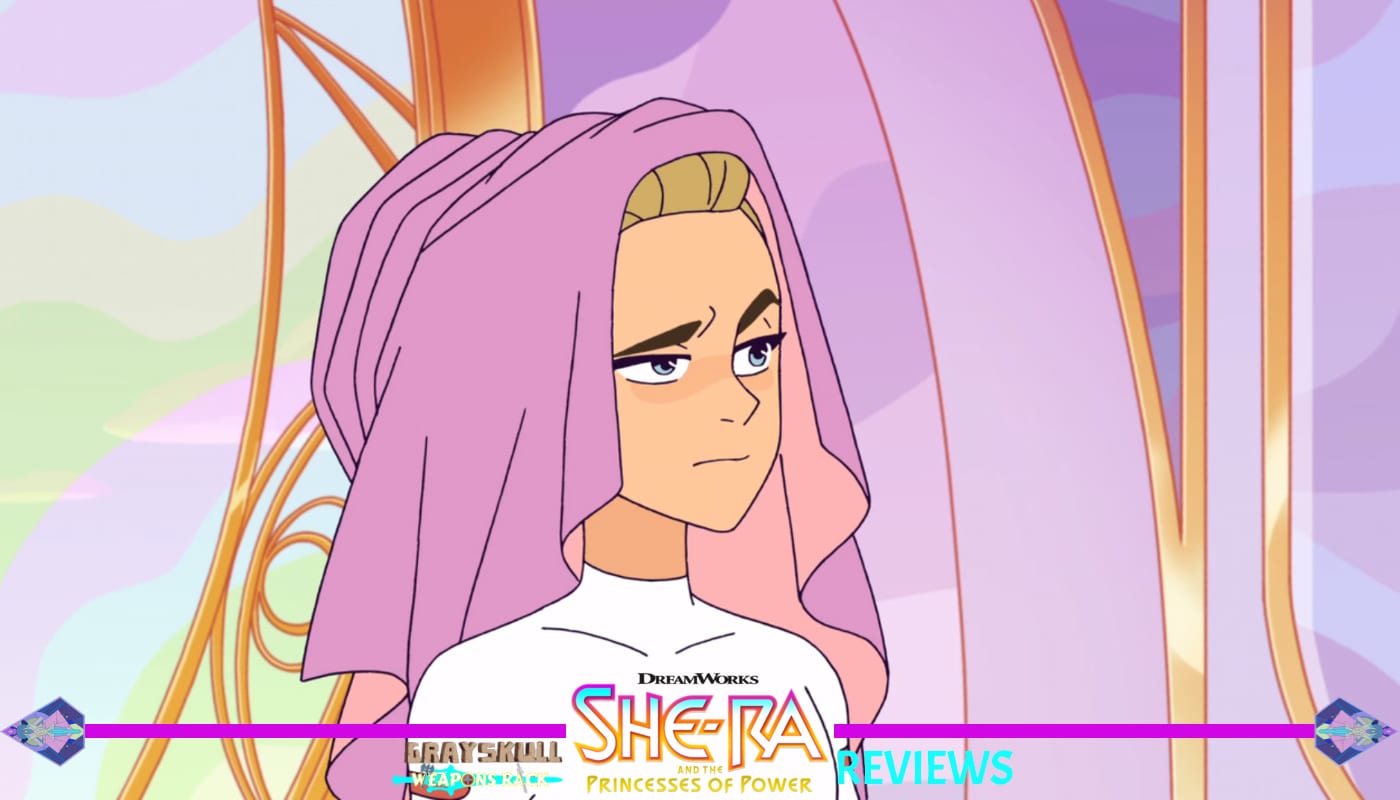 Despite Adora being a member of the Horde, Glimmer and Bow bring her back to Bright Moon. Glimmer asks Bow to sneak her in through the back way, which has them scaling a large cliff leading up to her room has Bow. Glimmer heads to the Moonstone to recharge, which is one of the six known Runestones in Etheria that is located in Bright Moon and is the source of power for both Queen Angella and Princess Glimmer. Speaking of Queen Angella, she is furious with Glimmer but she passes out before her mother chews her out. Bow descides to try and hide Adora by throwing a blanket over her but as Adora thinks about it, she feels that her not so distant past with the Horde past is something that the people of Bright Moon won’t tolerate but Meanwhile, Bow being the trusting soul he is reassures her that they’ll come to love her.

Queen Angella as she appears in the Dreamworks Netflix series vs. 1980’s Filmation cartoon 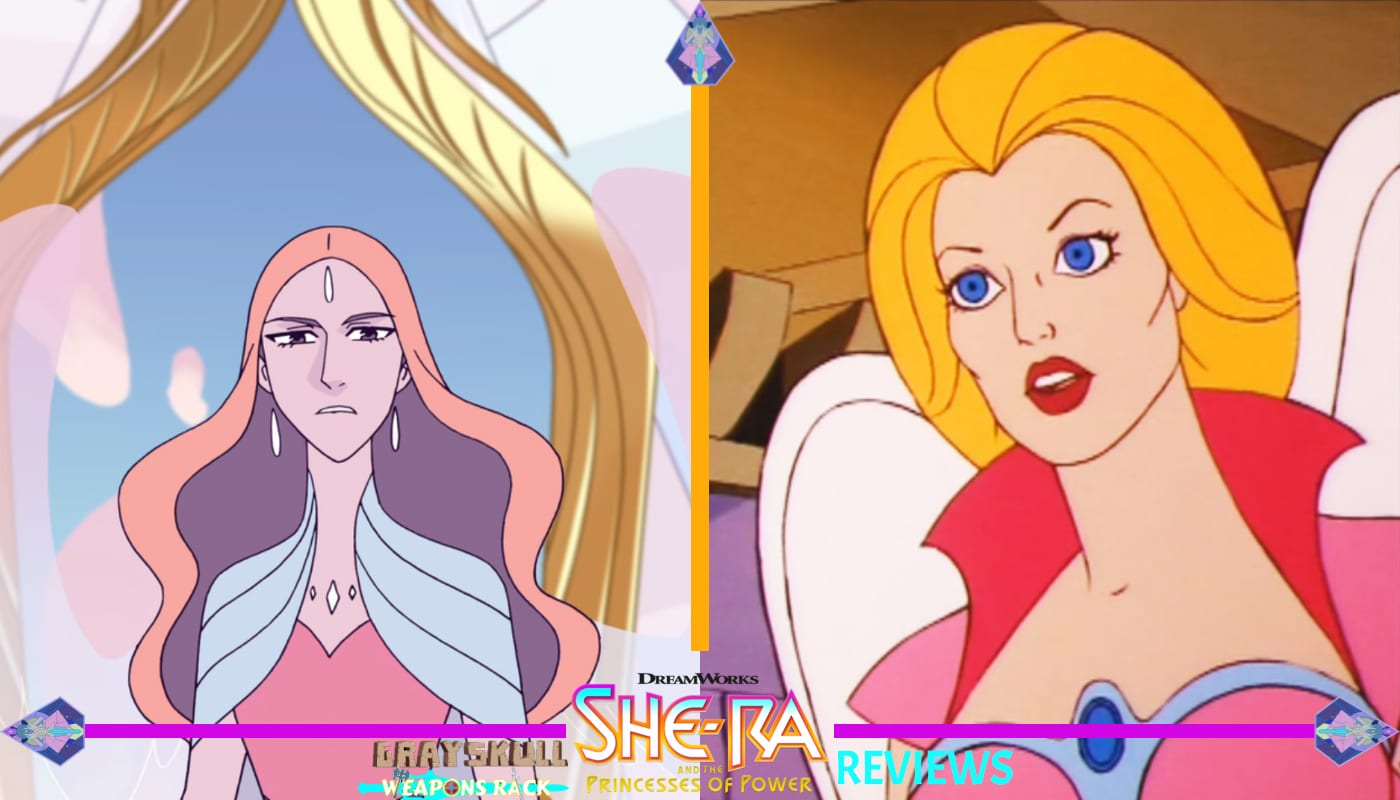 So let’s talk about Queen Angella! Introduced in The Sword Part 1, she looks very different from her glory days as a 1980’s Filmation character. The only aspect that remotely resembles her look is her wings, although they are significantly upgraded given today’s anime styles, which are translucent and shimmer. Queen Angella has long  pink and purple hair and she is shrouded in a long, blue cape, a pink body suit and purple boots. Befitting a queen, she wears an opalescent gem on her forehead which match her, matching her tear-drop earrings. Continuing with the espisode, Bow and Glimmer want to show off their newfound discovery that is She-Ra and seek out Queen Angella to tell her the good news! Meanwhile, Adora feels pressure to transform into She-Ra and goes outside where you can hear her shout “For the honor of Grayskull” all over the grounds as she tries to tap into her new ability. As she is channeling her power, she comes across Horsee, who we’ve seen in both The Sword Part 1 and the Sword Part 2, but she accidentally gives this stead some rainbow wings and a unicorn horn.

The accidental transformation of Horsey 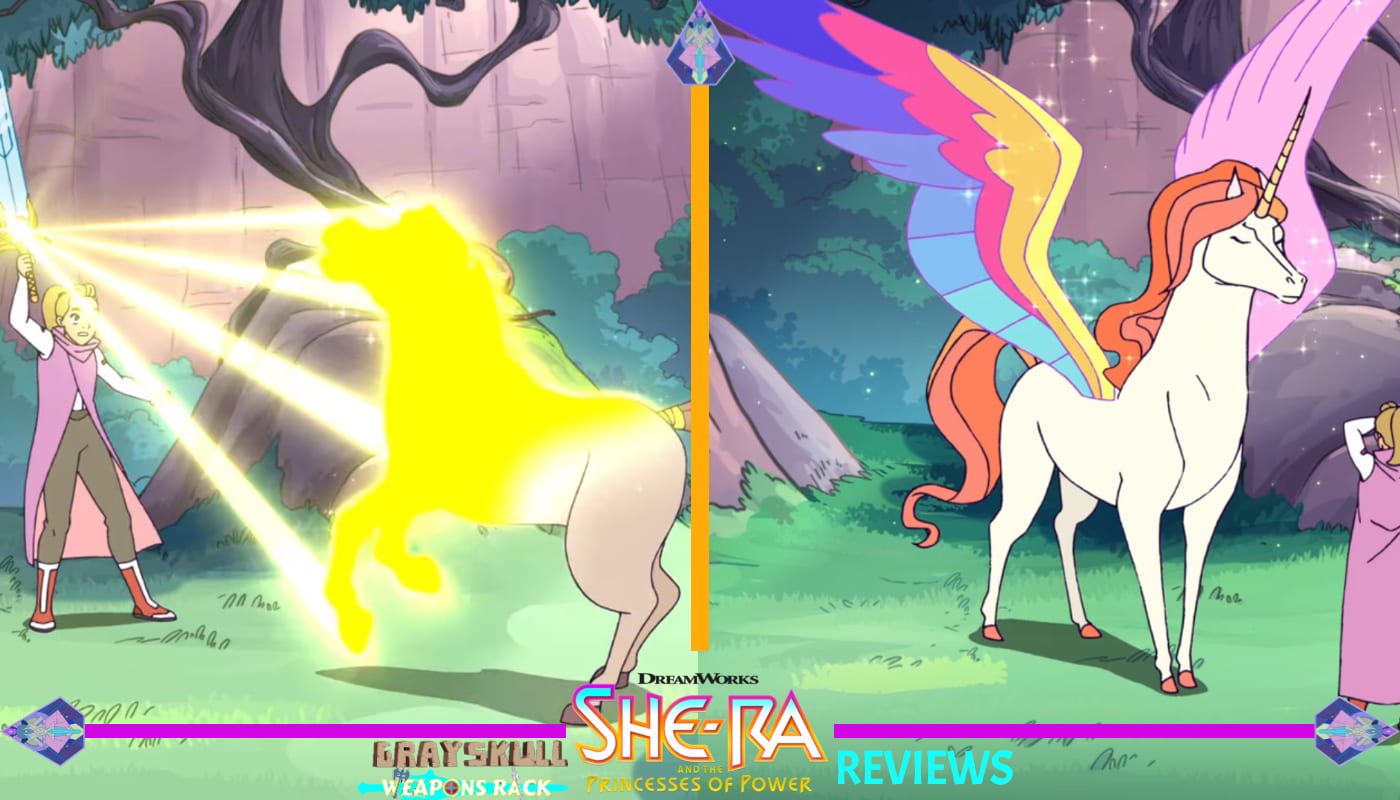 In a panic, Horsee does not know what to do with with his new wings and awkwardly flies into a nearby camp and causes a huge commotion. In the process, he blows away Adora’s pink cloak that was hiding her Horde symbol on her back but the people in the town know what that symbol is and they attack her to drive her out of the camp. Her pleas to the people that she has defected from the Horde go ignored and she engages with a guard in a sword fight but Adora is driven off into the woods to seek refuge. Queen Angella is none too  happy that Glimmer and Bow bought a Horde spy to Bright Moon as the Queen exclaims, “What did you DO!?”

Razz as she appears in the Dreamworks Netflix series vs. 1980’s Filmation cartoon 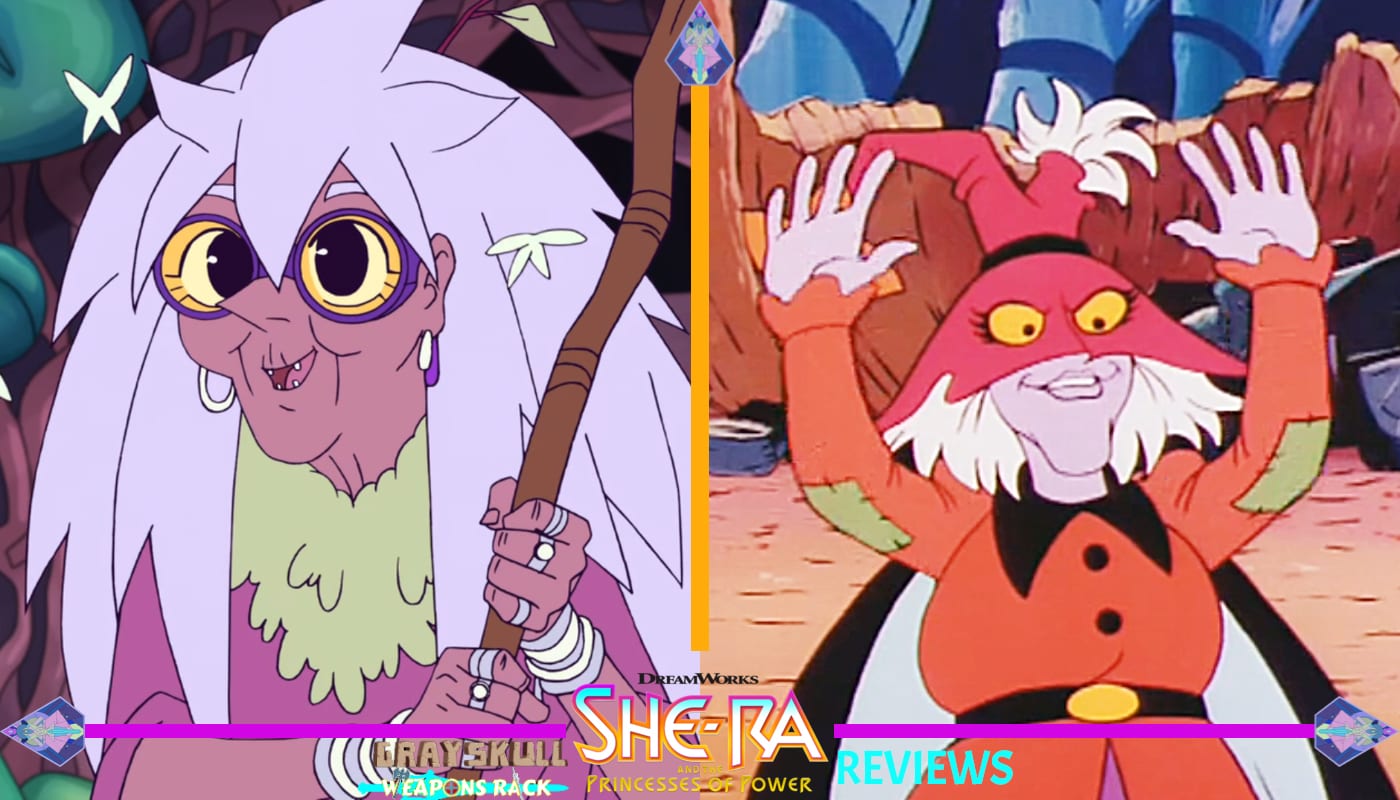 While in the woods, Adora comes across an old woman with a broomstick, which turns out to be none other than Razz, a recluse and senile being that possesses apparent lack of mental clarity. Always confused about what is happening around her, she refers to Adora as Mara and invites her to pick berries with her. I was happy see this version of Razz as the character from the 80’s Filmation cartoon had more of an aloof personality and had the catch phrase, “Deary my,” which I was elated to see replaced and shortened to “Deary.” For fans of the 1980’s Filmation cartoon, you will see some cool easter eggs in this episode. 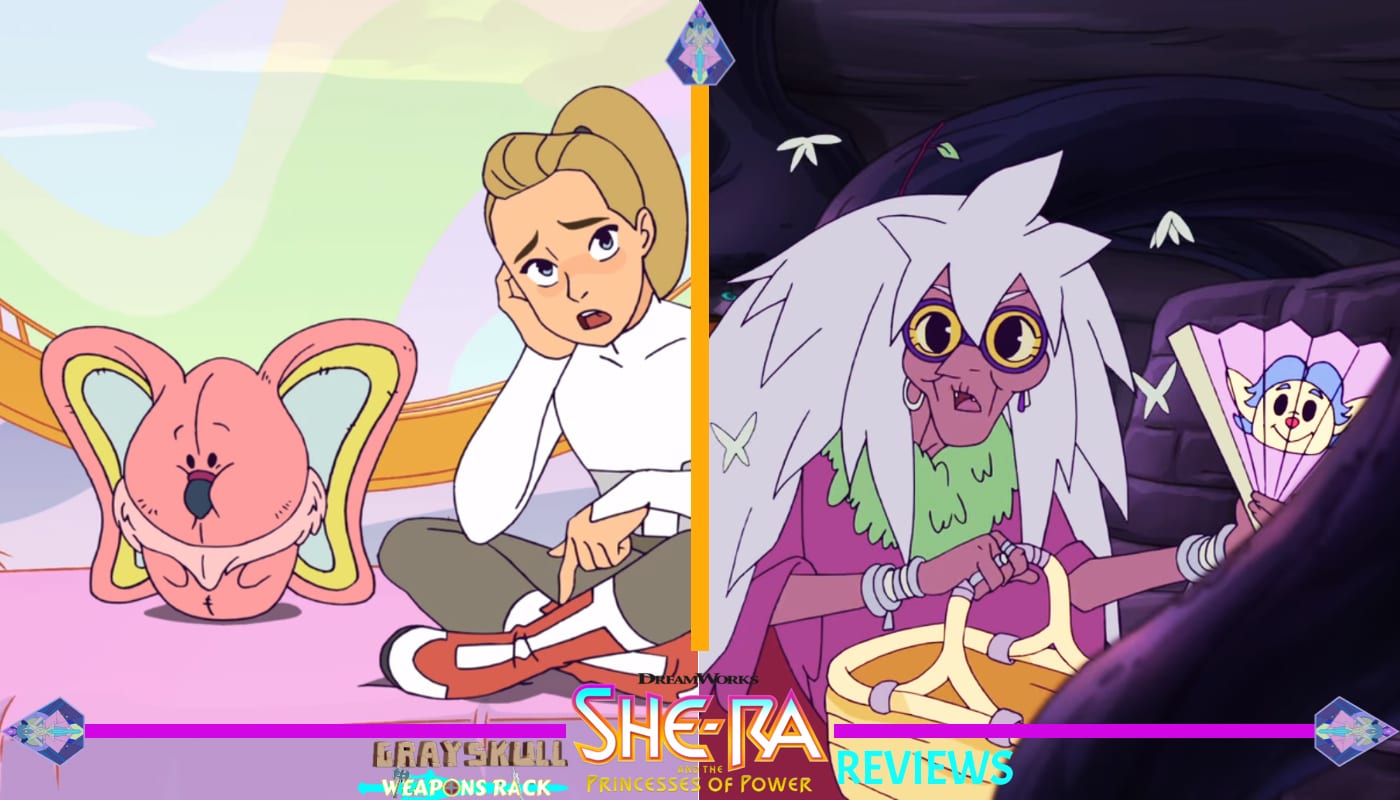 The first easter egg is a stuffed Kowl pillow that is seen earlier in the episode while Adora is hanging out in Glimmer’s room waiting for the arrival of Queen Angella. The second is a very cool surprise that Razz flashes on a fan as she puts it away in her basket before they go berry picking. Razz also alludes to Loo-Kee being one of her friends who is always hiding. I wasn’t a huge fan of Loo-Kee in the Filmation cartoon so I am happy to see him just referenced as he would not have added anything to the story lines aside from telling you not to do the obvious while giving you one of his life lessons.

The activation of the First One’s Ruin 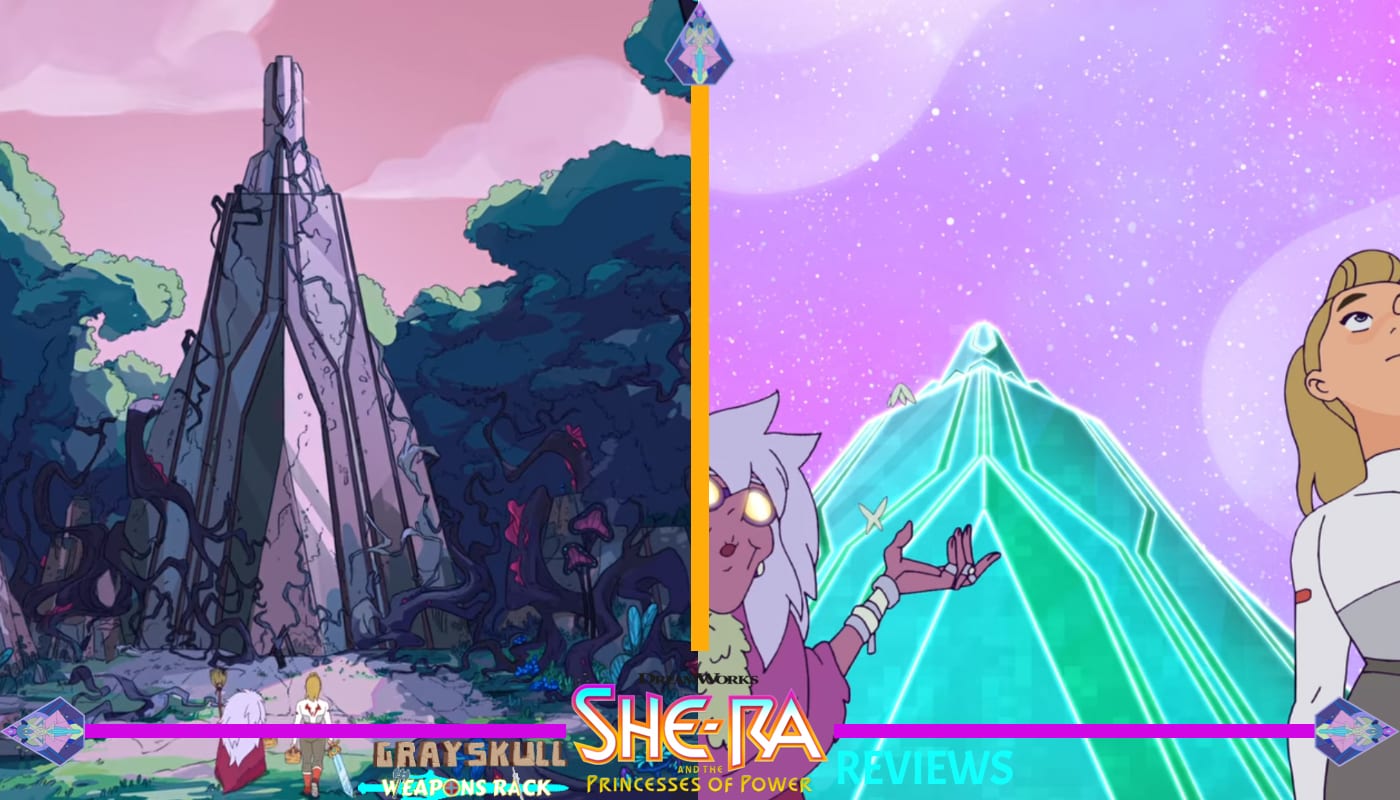 As they venture deeper into the forest, they stumble upon a First One’s ruin. Razz immediately scales to the top of the ruin as the best berries are up there and as she climbs higher, it appears that she is activating the ruin but it’s actually responding to the presence of Adora’s sword, which lights up the entire ruin and fills the sky with stars. They continue their hunt for berries elsewhere. 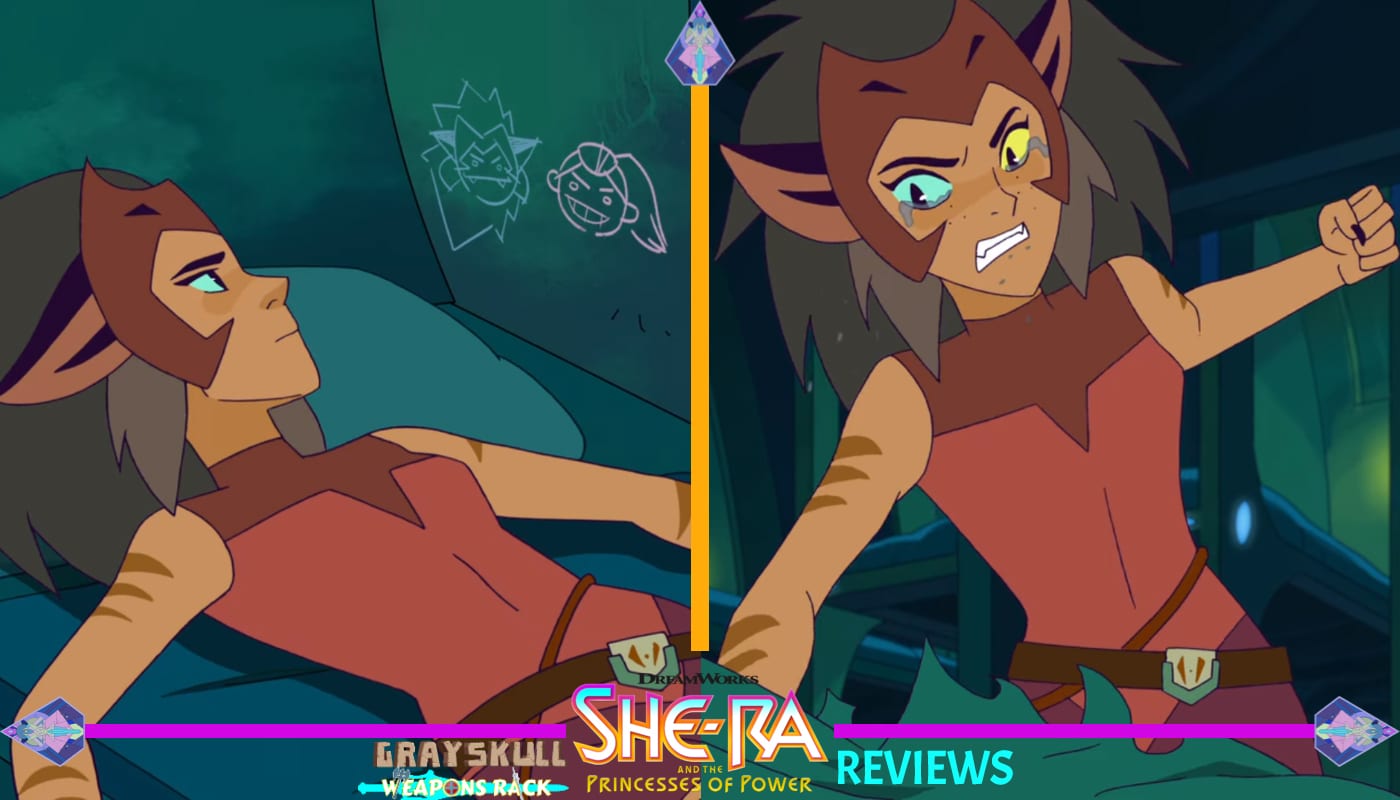 Back at the Fright Zone, Catra grows more and more enraged and resentful of Adora for leaving her. She tears up and cries tearing apart her bed in frustration. Shadow Weaver is not too happy with Catra and gives her a stern lecture her for not bringing Adora back but Catra stands up for herself and argues in Adora’s defense, but is quickly knocked down by Shadow Weaver’s shear magical strength. Seathing with anger, Shadow Weaver grows taller and tells Catra she will be answering to a higher power, which is “Hordak himself.” Meanwhile, Adora and Razz continue deeper into the forest and Adora pleads with Razz to help her figure out what to do but Razz does not know.

She-Ra to the rescue 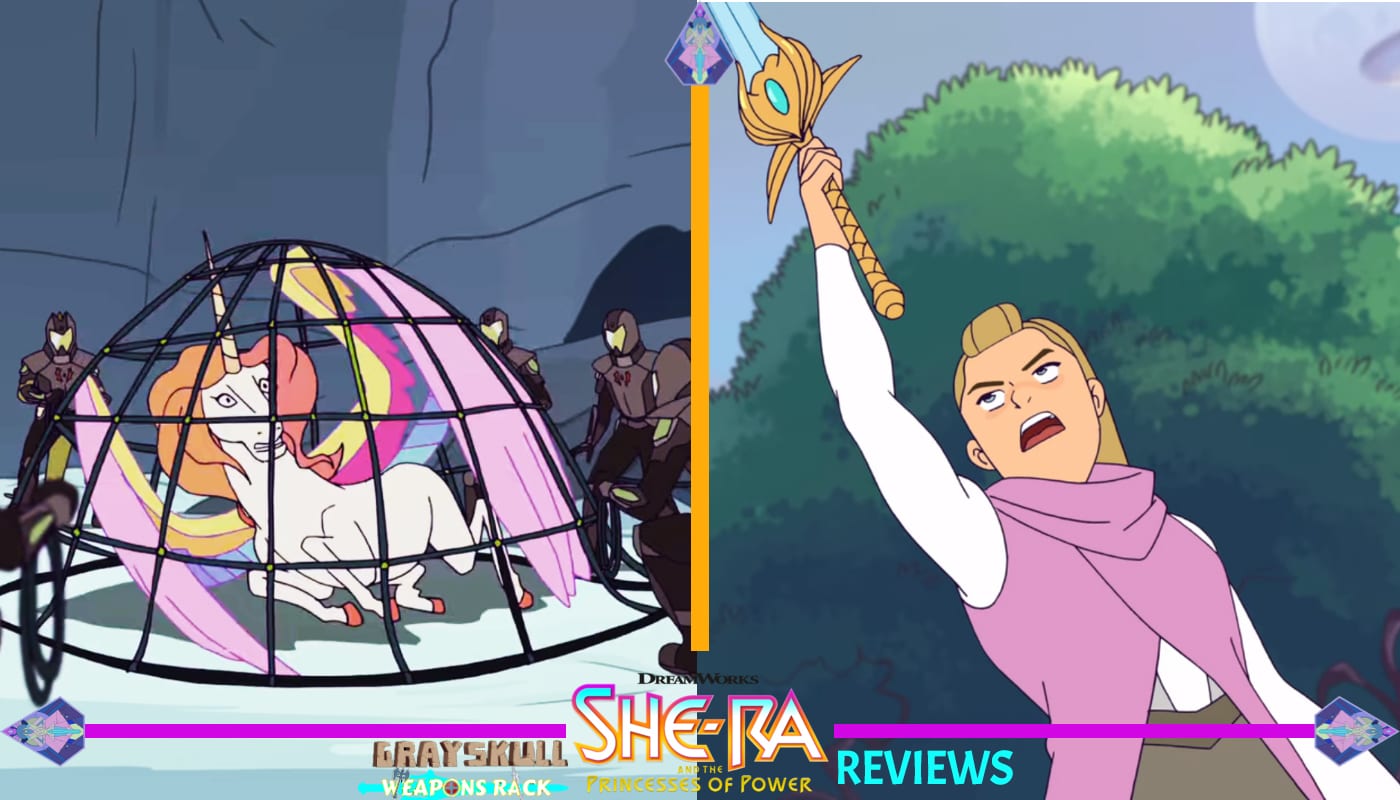 They stumble across a battlefield rittled with blown out shells of Horde tanks as Razz tells Adora that it is the same old story of wicked people destroying what they can’t control. She alludes to the Princesses hiding away in their own respective castles protecting their own lands while the Horde runs rough shot through Etheria. As Adora feels that this is wrong of the Horde, she hears a horse cry in the distance. Heartbroken and saddened by what she see’s she intently stares at the Sword of Protection and firmly says, “for the honor of Grayskull,” transforming into She-Ra.

The transformation to She-Ra 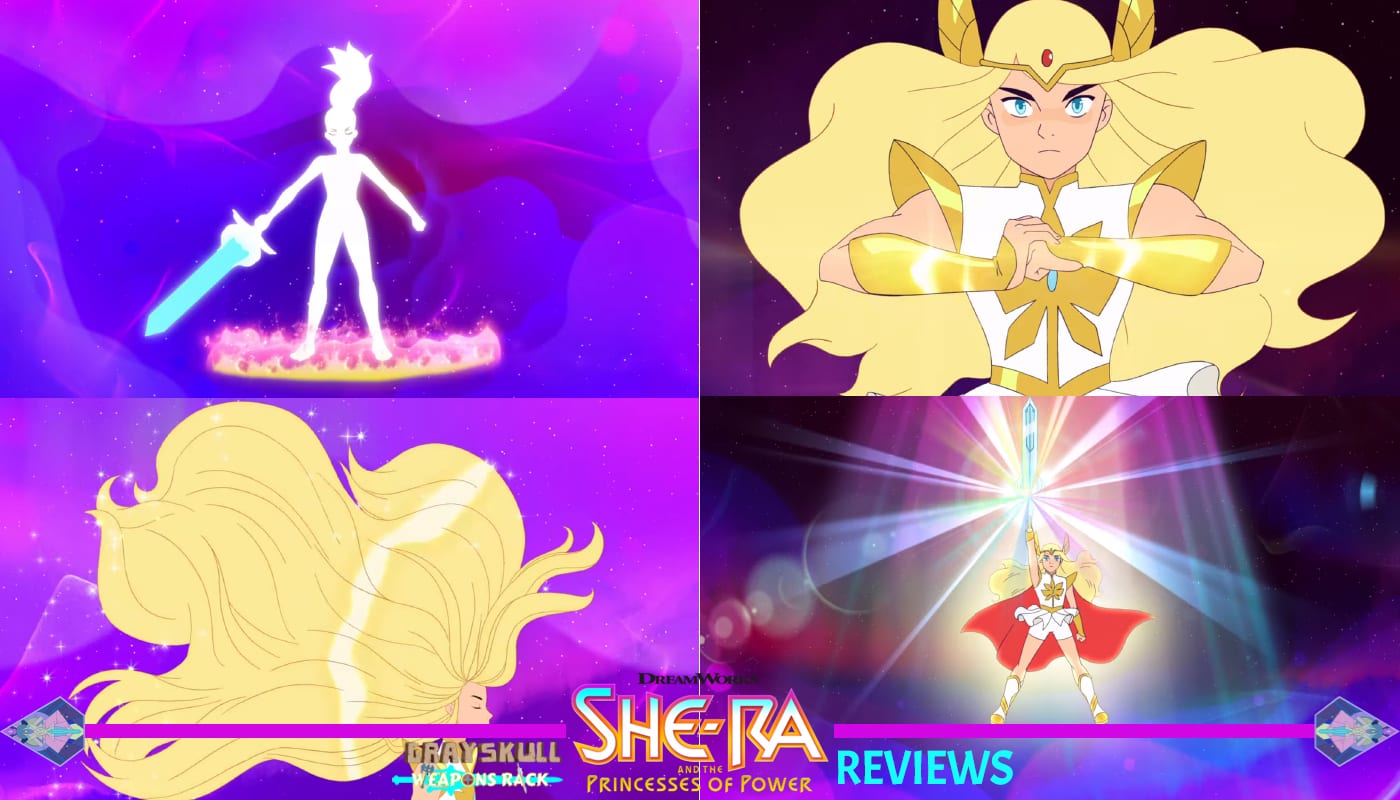 Adora takes on a battalion of Horde soldiers led by Grizzlor and they are no match for the Princess of Power as she disposes of them quickly and frees Horsey but not before Grizlor hits her with a swift beam blast from a tank, knocking Adora to the ground. In a nod to the 1980’s version of Razz, she shout’s “Razzle Dazzle,” casting a spell that wisks her and She-Ra away from harm. 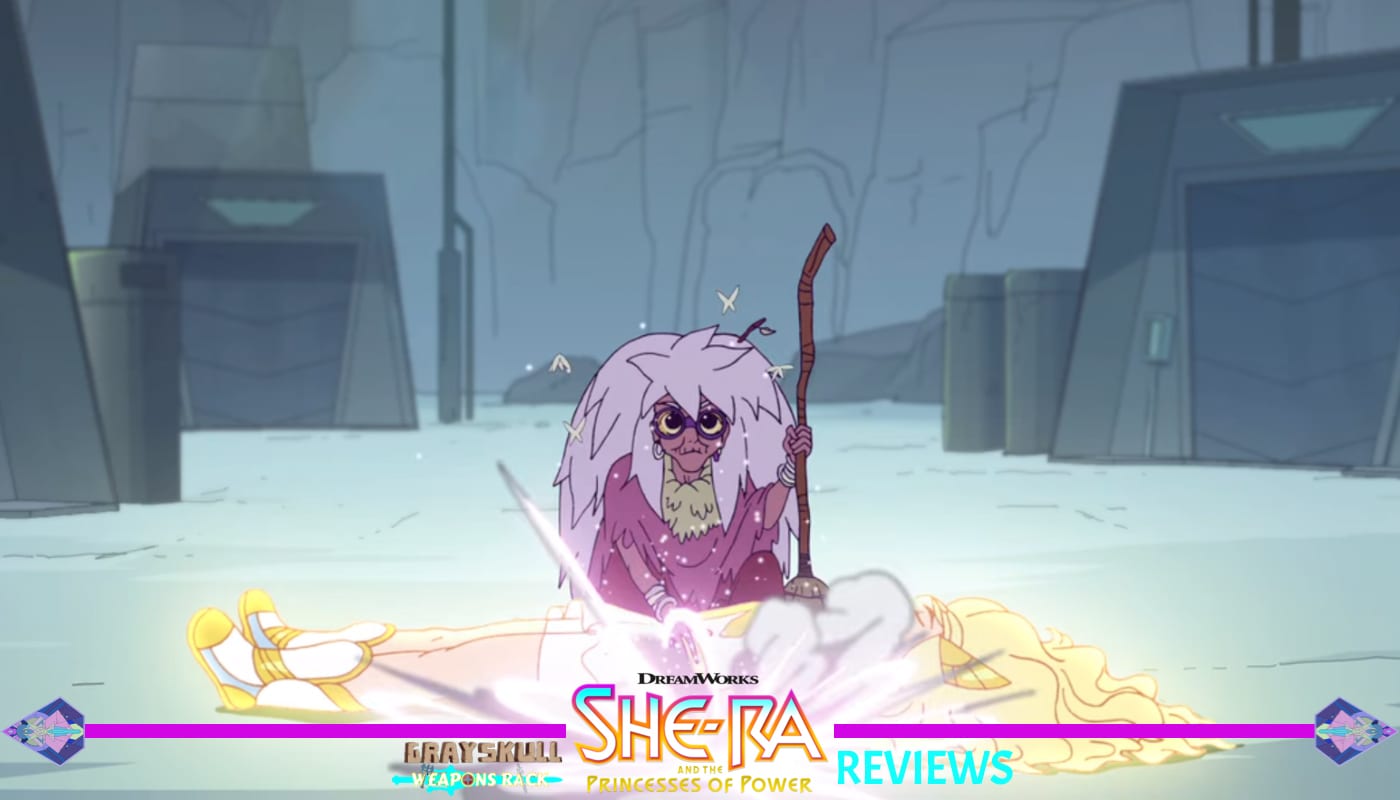 Adora wakes to Razz and the newly dubbed Swift Wind (Horsey) and she decides that it’s now her duty to protect the world from the Horde, since the Princesses will not and she kindly asks Swift Wind back to Bright Moon where Adora arrives just in time to show the Queen that she is She-Ra, but she’s also a former Horde soldier.

“The Rebellion accepts your allegiance, She-Ra, Princess of Power” 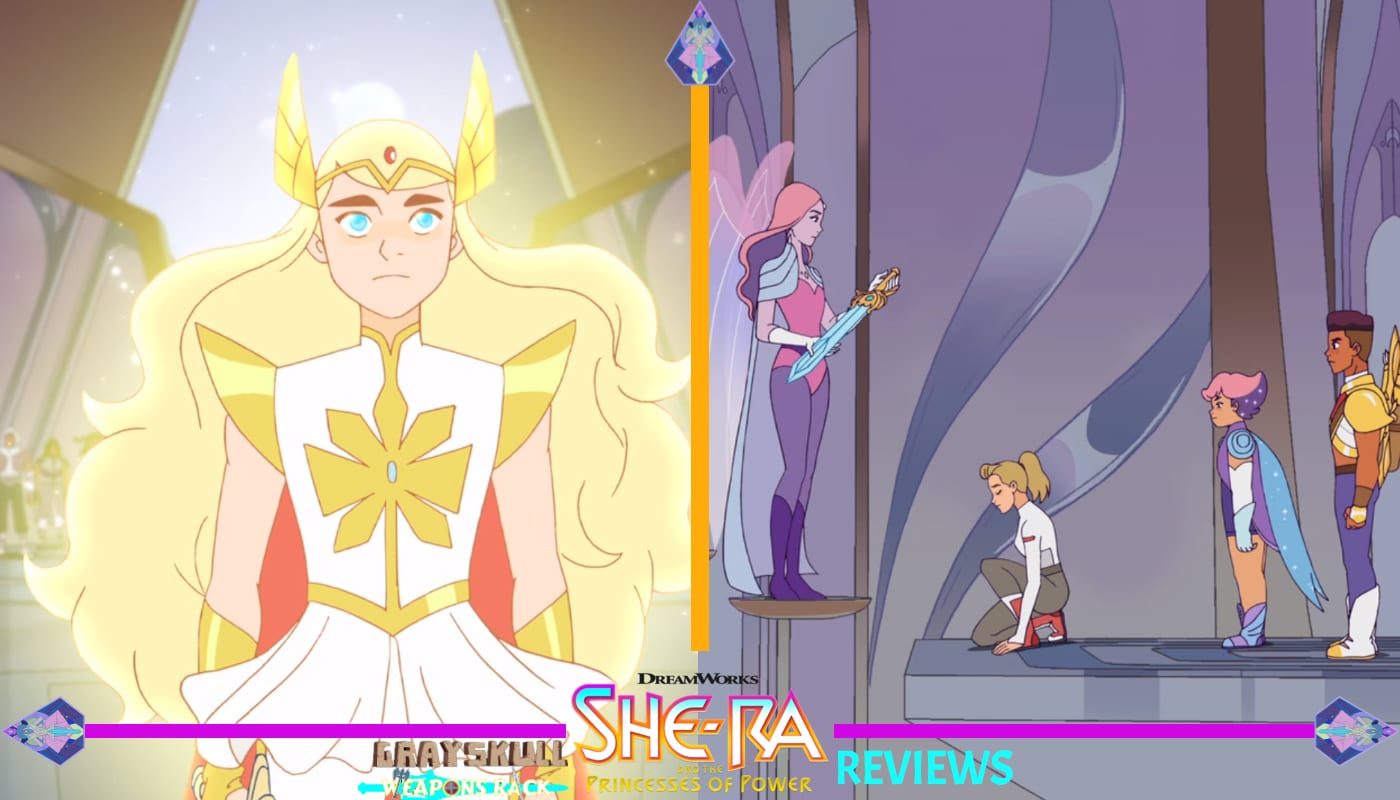 She appears shrouded in a bright glowing light as she approaches Queen Angella to pledge herself to the Rebellion but then transformers back to Adora to reveal her true self, which is a former Force Captain of the Horde and that she is willing to leave that life behind. Glimmer introduces Adora as she explains that she has witnessed the atrocities of the Horde and is willing to fight for the Rebellion as she knows she can help turn the tide of the war.

Imp as he appears in the Dreamworks Netflix series vs. 1980’s Filmation cartoon 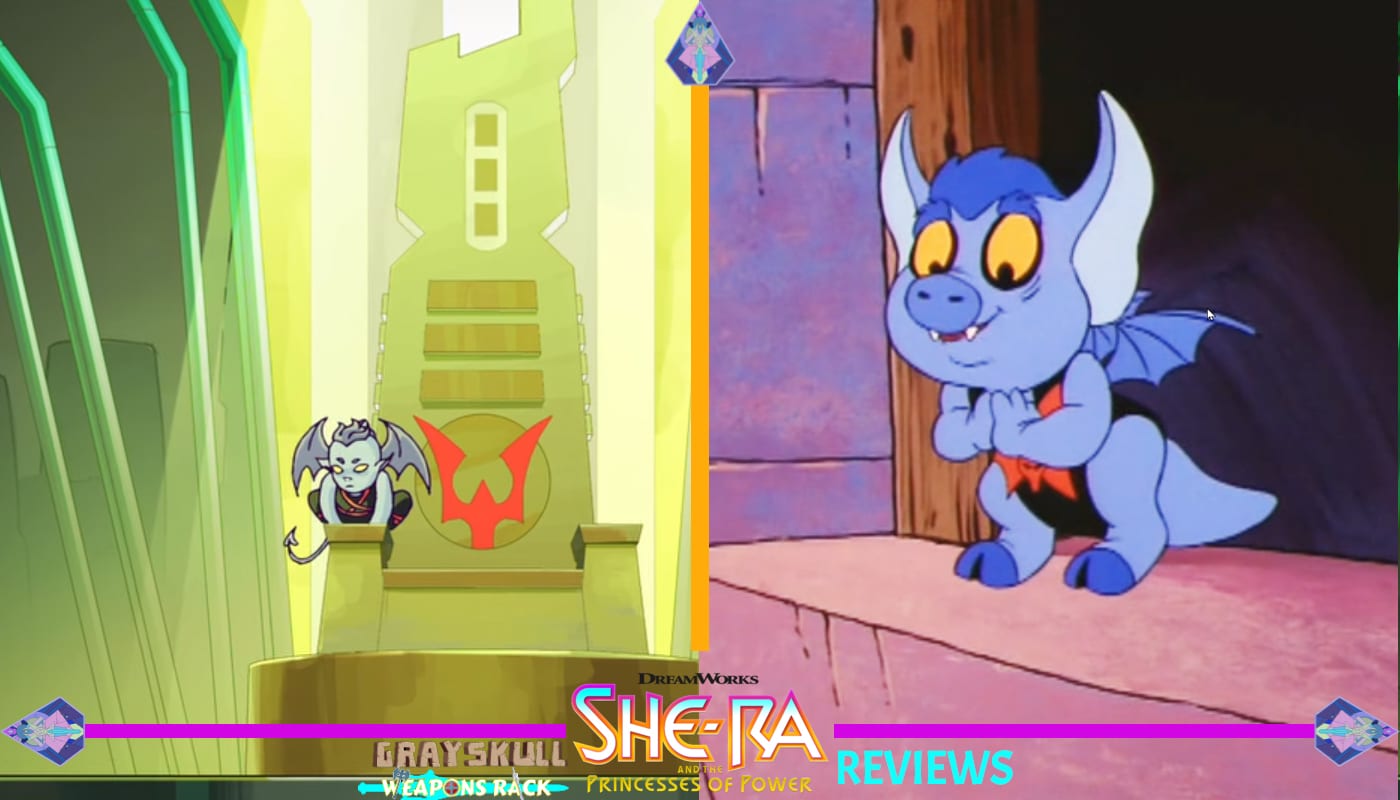 Back in the Fright Zone as Shadow Weaver escorts a frightened Catra to face Lord Hordak,  we are finally introduced to a couple familiar yet different characters. Imp appears crawling down Hordak’s throne and has a ratlike squeal emanating from from him. Taking on a darker persona, Imp is a mysterious creature that looks like a cross between a human baby, a gargoyle, and an elf, which is a serious departure from the personality and the rendering of Imp from the 1980’s Filmation cartoon. 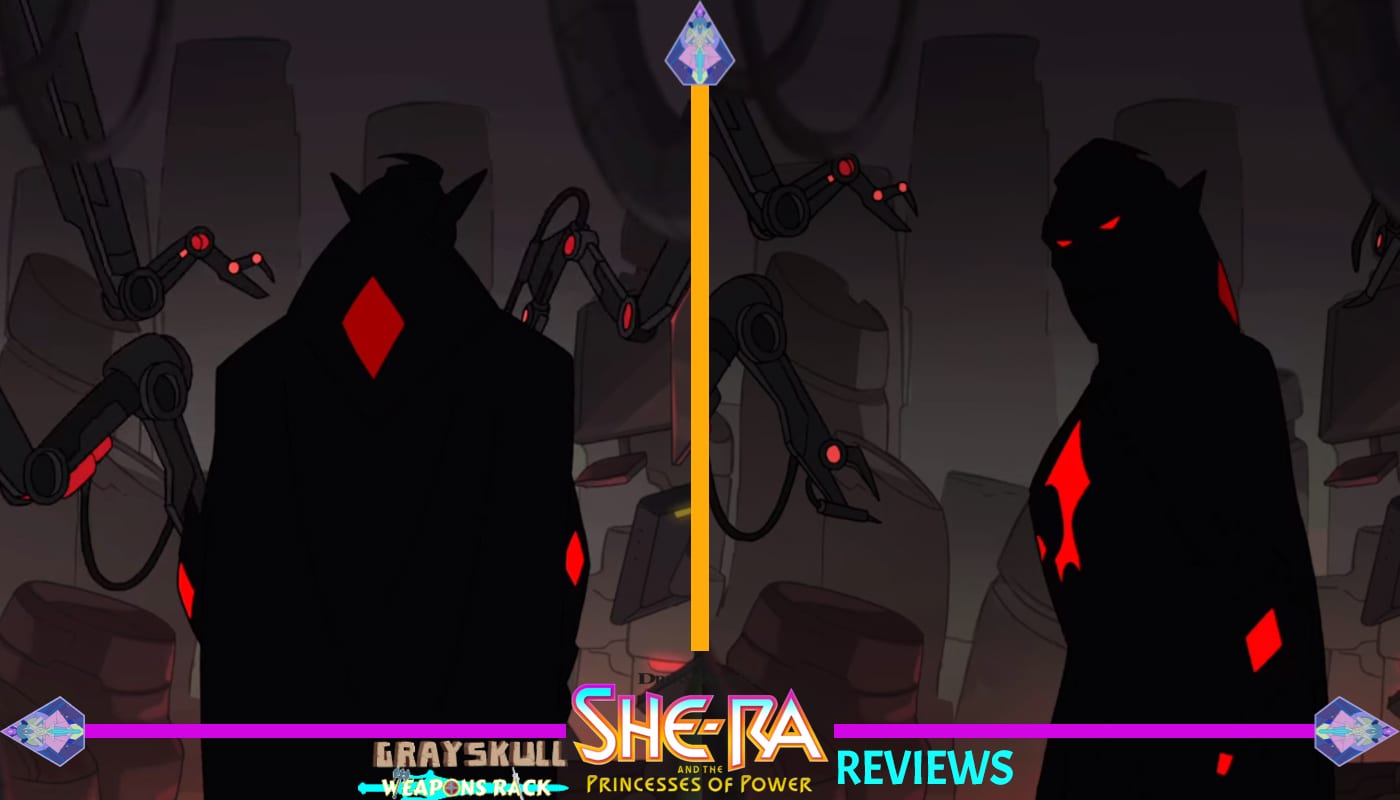 We finally see the illusive Lord Hordak as he appears to be repaired by one of his technological advancements, hinting that Hordak is part machine. After the mechanical arms are finished applying the finishing touches to the evil leader of the Horde, he turns around but is still seeking solace in the shadows. Shadow Weavers appeals to Hordak to take harsh measures on Catra but Hordak blames Shadow Weaver for Catra’s downfalls and annoints her “Force Captain Catra” and hands her a badge. 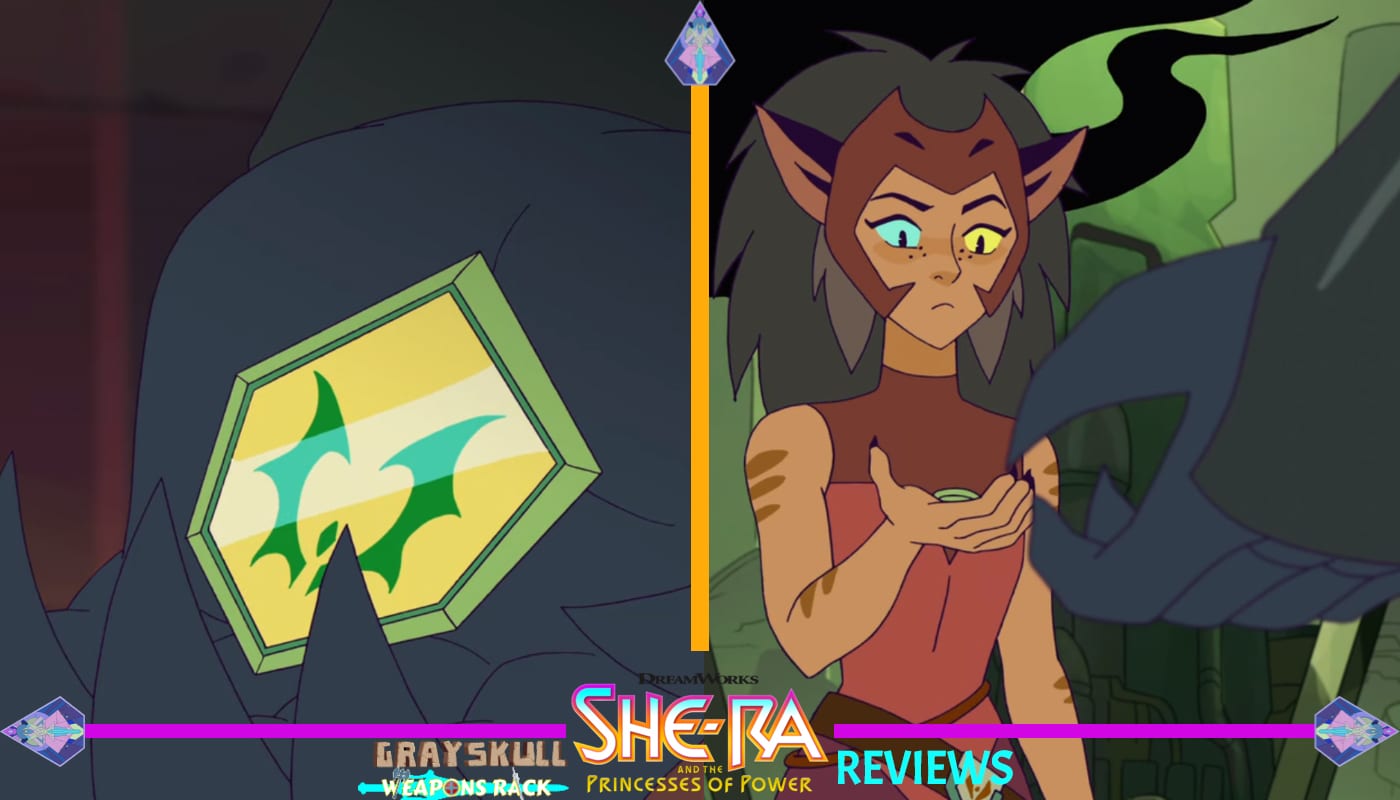 As Hordak christens a new Force Captain, he appears from the shadows and let’s out a grunt but we finally see his face as Catra smirks in delight clutching her new badge of honor.

Hordak as he appears in the Dreamworks Netflix series vs. 1980’s Filmation cartoon 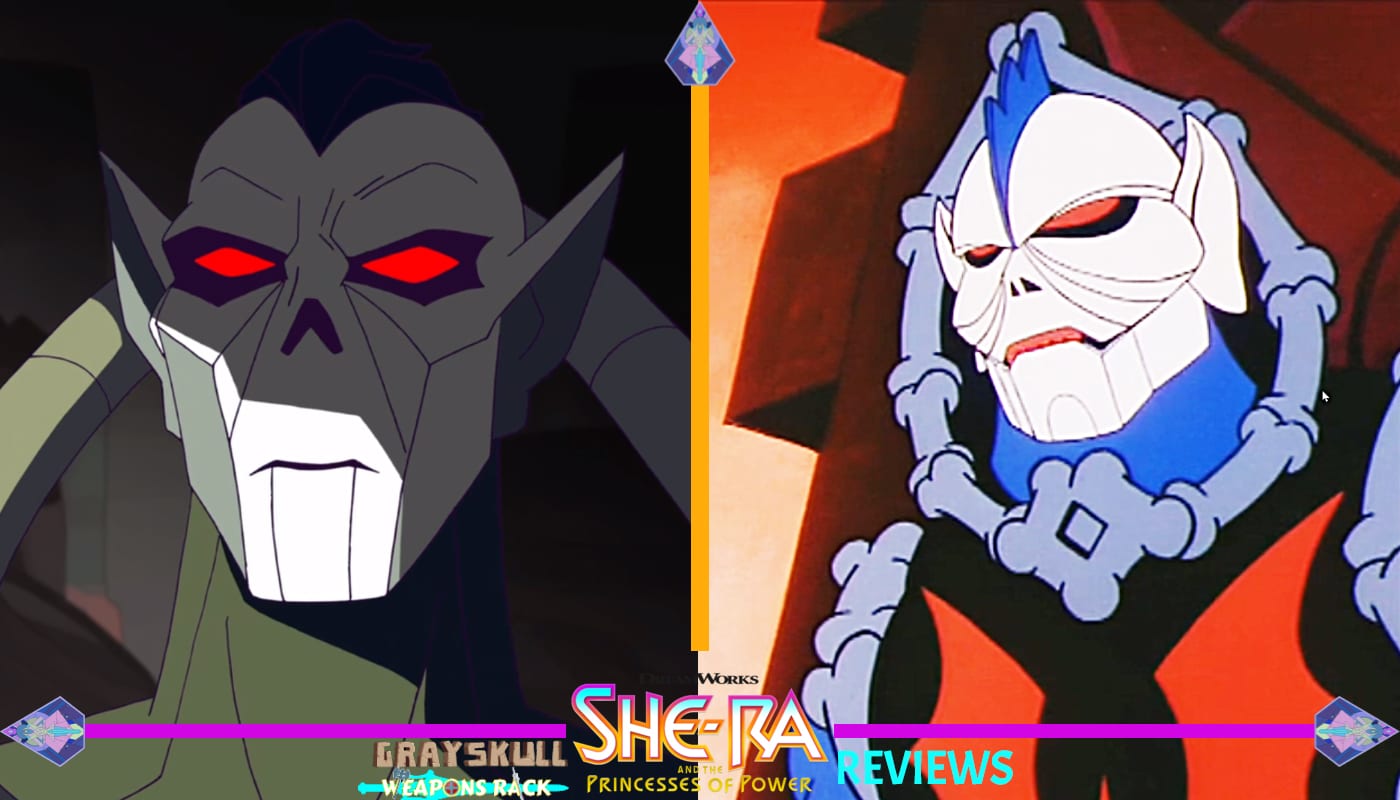 In the final character comparison of this episode, we get to see just the face of Hordak and this is the first character that looks very similar to his 1980’s Filmation counterpart. He has a stern and commanding voice, which is very different than his more lighthearted leadership style from the Filmation cartoon. In the latest incarnation of Hordak, he is shown to be more serious and intimidating, designed to resemble a  He may be designed to resemble a bat which is evidenced by his fangs, nose nose, and long ears.

“Once upon a time, there lived a Hobbit” 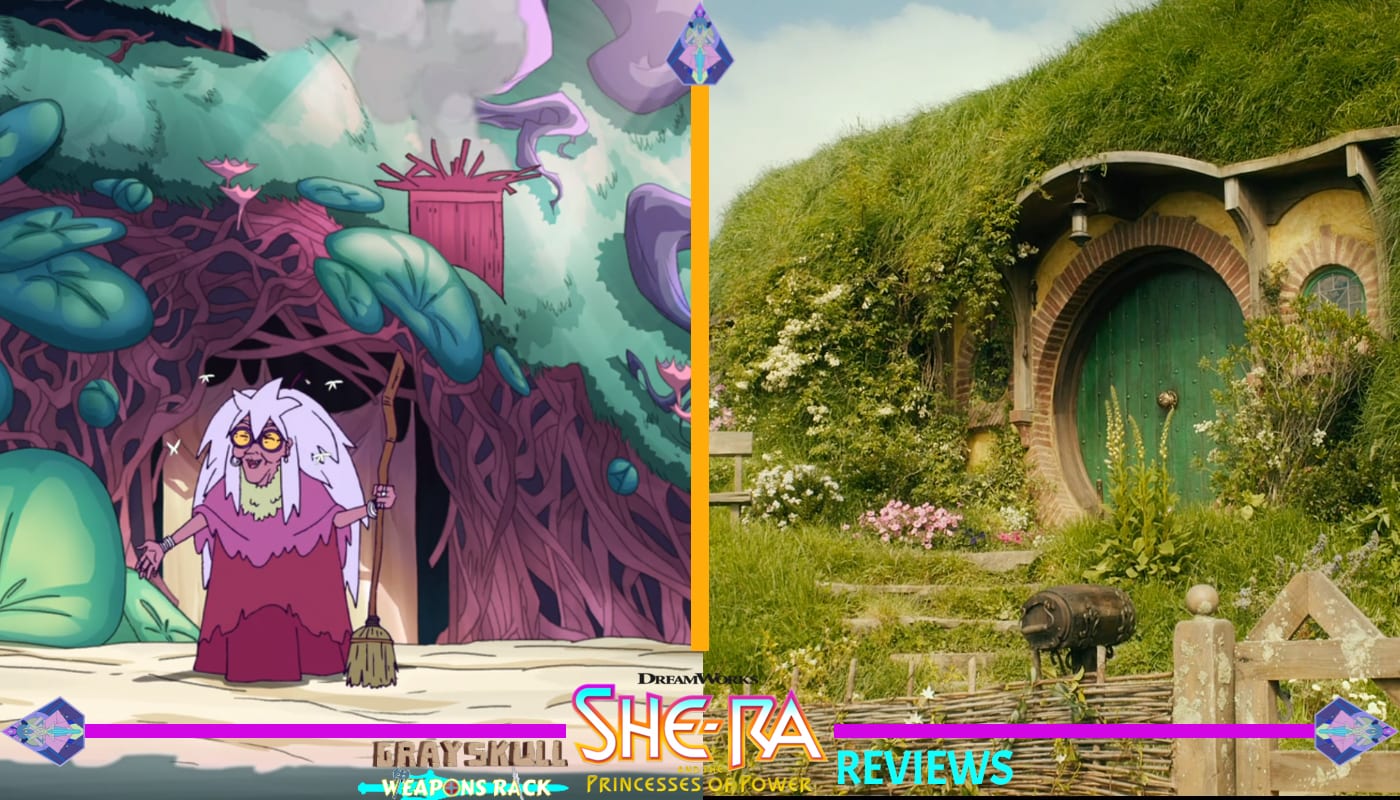 Being a huge Lord of the Rings and Hobbit fan, I immediately though Razz’s home looked like a Hobbit hole. The both are made from the natural surroundings of trees, rocks, and plants and seem to both be part of a hill or a mountain side. The interior of Razz’s home is not as grand as the one found in the Hobbit but is seems quaint and pleasant for a senile old lady who speaks to  broom and lives by herself. 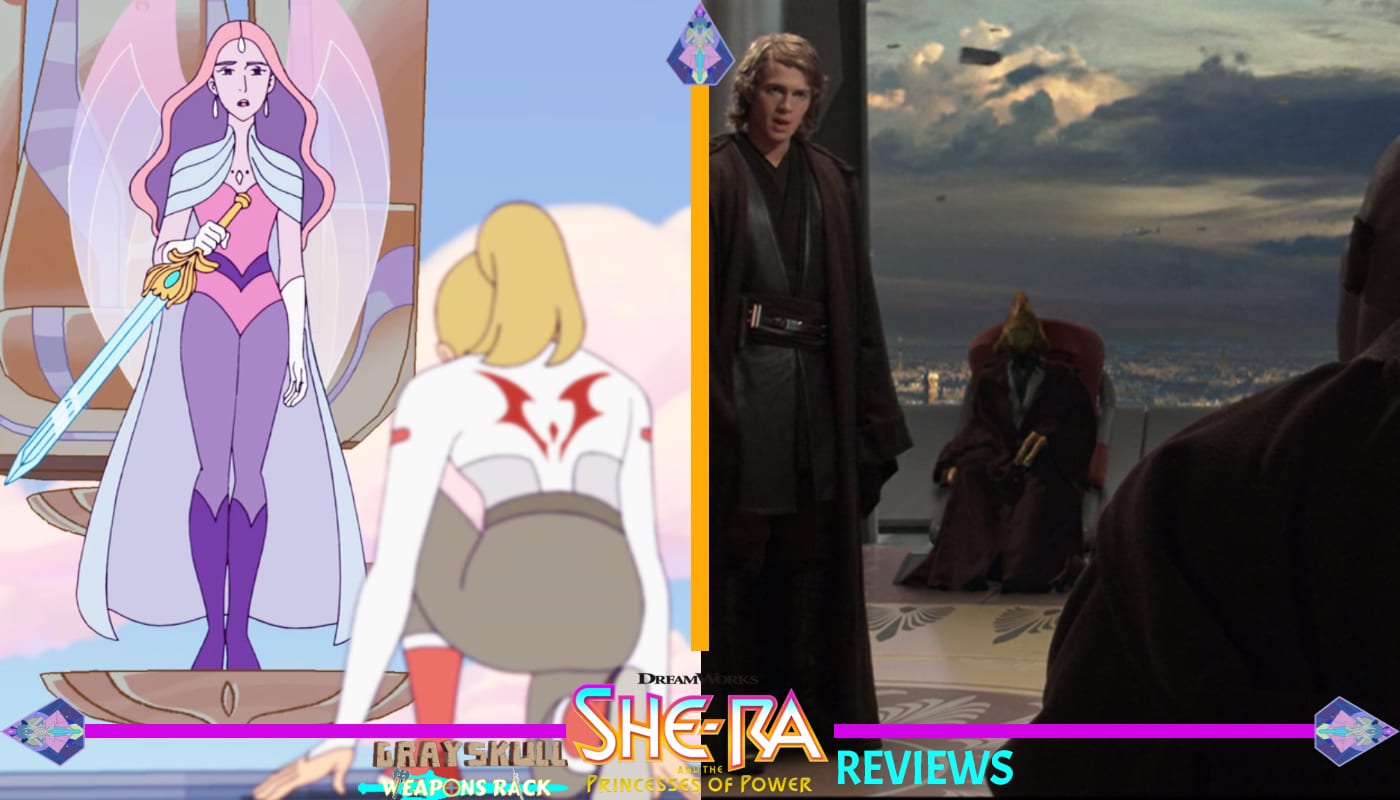 Just as Anakin Skywalker was suposed to bring balance to the force and destroy the Sith, Adora is now tasked with bringing balance to Etheria. As Adora knelt in front of Queen Angella, it reminded me of the harrowing story of Anakin Skywalker and his slow transformation into the icon we all know as Darth Vader. In the Star Wars canon, Anakin was to bring balance to the force and in one of my all time favorite quotes from a Star Wars movie, it was Obi-Wan who pleaded with Anakin when he said:

“You were the Chosen One! It was said that you would destroy the Sith, not join them. bring balance to the force, not leave it in darkness.”

Will Adora be tempted back to the dark side to rejoin the Horde? Will she sucomb to the rage and injustice that Anakin felt? Only time will tell so tune in for the next review…whenever I get to it 🙂