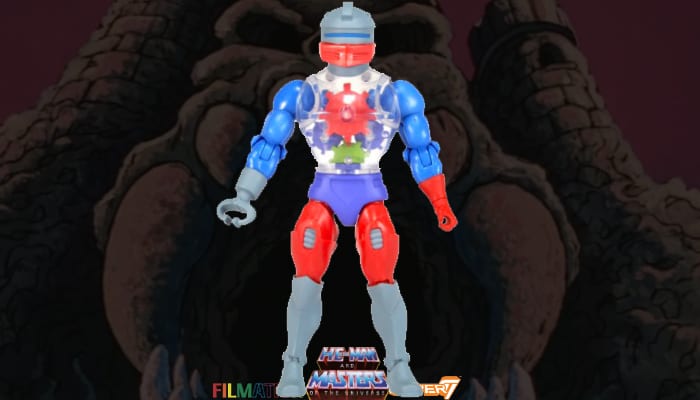 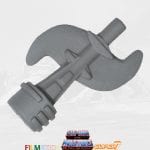 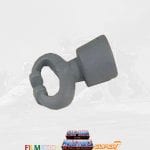 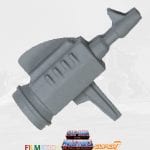 Roboto action figure from the Filmation Super7 Masters of the Universe toy line. 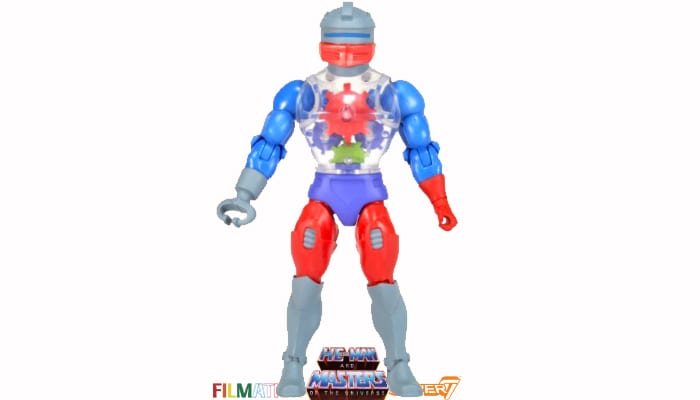 Roboto, an explorer from the alien planet of Robotica, is o powerful addition to the Heroic Warriors. He possesses tremendous physical strength and con effortlessly walk through any structure. He can also generate an electrical charge throughout his body which can paralyze any foe, and he has the ability to absorb energy from any source. He has a surprising emotional depth that is a result of his initial encounter with and the heroes of Eternia. With his life saved by Man-AT-Arms on two separate occasions, Roboto. displays unwavering loyalty to his friends. 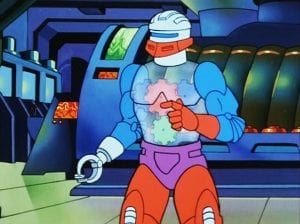 An explorer from the planet Robotica, where he’d existed with five thousand of his “brothers and sisters,” Roboto crashed onto Eternia. Man-At-Arms repaired him and brought him back from the brink of deactivation. Roboto was also able to eventually fight off the reprogramming Modulok did to wipe clean his memories. Though kindhearted and a little naive, Roboto possessed tremendous physical power and could generate an electrical charge throughout his body for protection. He could scan any life forms, and he emitted a specific frequency that the heroes could track.

According to the Wiki, Grayskull, Roboto was introduced into the Masters of the Universe toy line in 1985. His first appearance is in the Mattel mini-comic “The Battle of Roboto”, in which he is built by Man-At-Arms, who gives him a cybernetically-enhanced heart, which enables him to feel human emotions and interact with his comrades as a human rather than as a machine. He was an exceptionally brave fighter, even to the point of taking on Hordak in single combat in one issue.

Given that the accompanying cartoon series was drawing to a close at the time his action figure was released, Roboto only makes one appearance in the cartoon, but unlike most other figures released at this time, Roboto was lucky enough to get a whole episode written around him. This episode, “Happy Birthday Roboto” features a radically different origin story for him, in which he was a space explorer from the alien world of Robotica, who crash-landed on Eternia. Initially wrecked by the crash, he was repaired and restored by Man-At-Arms. 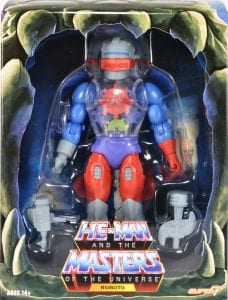 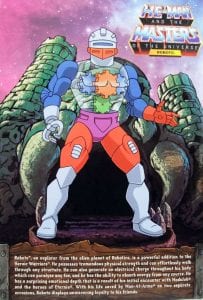