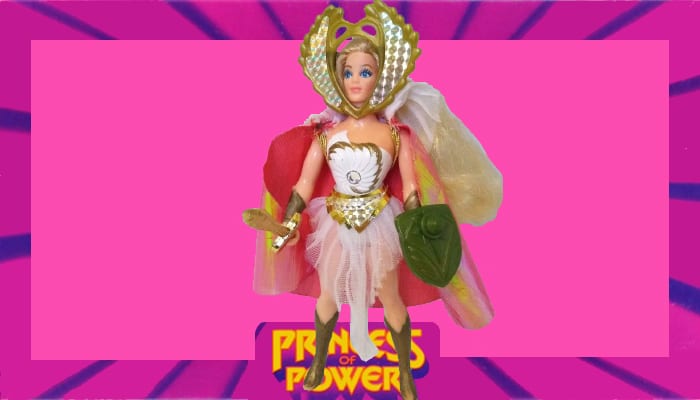 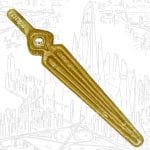 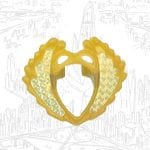 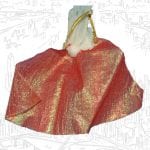 She-Ra has blonde rooted  hair and blue eyes and is dressed in a white bodysuit with gold starburst design and silver jewel. She also has gold boots and gold cuffs. Her accessories include:

King Randor and Queen Marlena from planet Eternia had twins, a boy and a girl named Adam and Adora. Hordak, leader of the Evil Horde, kidnapped Adora and escaped to Etheria, where Adora was raised as a mind-controlled Force Captain of The Horde. Adora’s uniform – which she continued to wear throughout the series, even after defecting to the Rebels – consisted of a red leotard with long white sleeves, red boots with matching gauntlets, and a black belt.

The Sorceress sent Adam and Cringer to the planet Etheria to find the Sword of Protection’s rightful owner. The Sorceress, through the jewel in the Sword of Protection reveals to Adora that she was kidnapped by The Horde when she was a baby and that she had a twin brother. By repeating “For the honor of Grayskull” she is transformed into the heroine; She-Ra. She then releases a captured He-Man and jumps from a window, crashing into the Horde stables. She-Ra lands atop Spirit who is transformed into Swift Wind, a talking unicorn. They fly ahead to warn The Rebellion. He-Man and She-Ra return to Eternia, but she decides she must return to Etheria so that she can help free the planet from the Horde oppression.

Adora, having been trained by the Horde her entire life, assumes leadership of the Great Rebellion. The epic battle to free Etheria from the grip of the Evil Horde rages on, spreading across the corners of the planet. Through this war, She-Ra calls upon her allies across the globe, using their special talents to battle against Horde creations. Whether or not She-Ra and her forces were ever successful in defeating the Horde was never revealed as the series was cancelled before any resolution could be reached. However, it was shown little-by-little that the citizens and kingdoms all over Etheria were rising up against the Horde and pushing back against their tyranny. Unlike Adam, who often feigned laziness and a carefree attitude to deflect any suspicion that he may be He-Man, Adora never acted against her nature and was always seen as brave and selfless, willing to help others in need at a moment’s notice.

When Adora transforms to She-Ra, two castles are shown in the background. The first is Castle Grayskull. The second is the Crystal Castle. The Crystal Castle is located atop Skydancer Mountain and is overseen by an entity called Light Hope, who advises She-Ra in times of crisis. In the Princess of Power toyline, the castle is also protected by two winged crystal horses, Moonbeam and Sun Dancer. The Crystal Castle’s location is known only to Ahgo (King of the Trolls), She-Ra, and He-Man (she brought him there one time); She-Ra has sworn to secrecy its location, thus earning the title of “Defender of the Crystal Castle.”

She-Ra Appears in the following episodes: