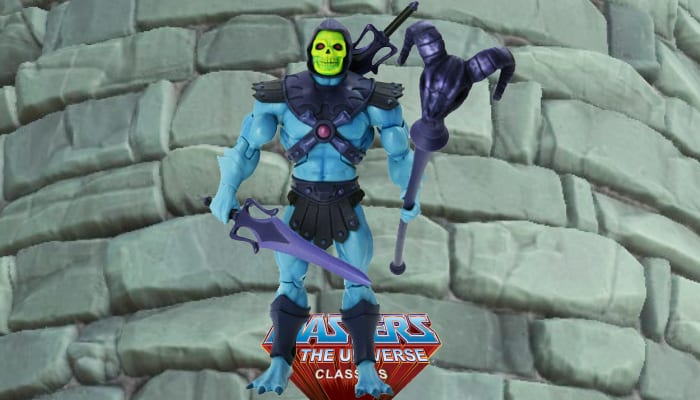 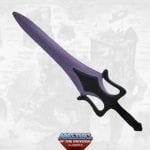 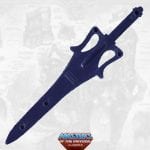 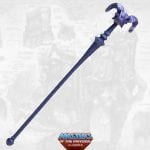 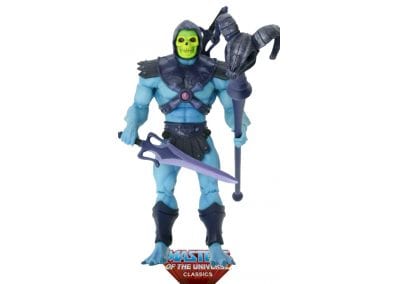 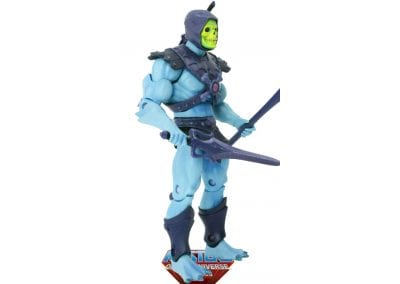 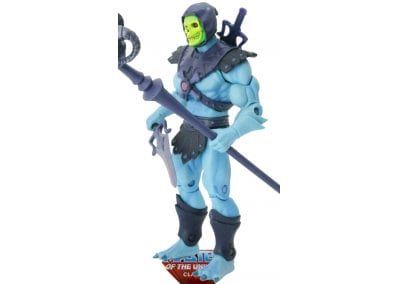 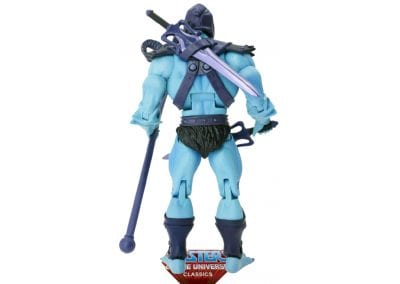 Skeletor action figure from the Masters of the Universe Classics line. 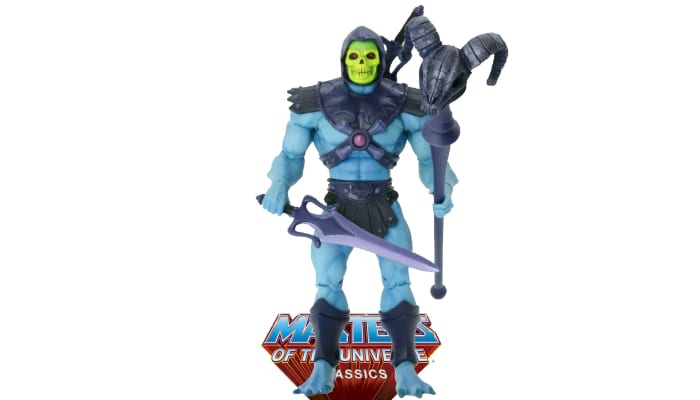 Mortally wounded in a battle with his half-brother, Captain Randor™, Keldor™ turned to his dark-arts master Hordak® to save his life. Merging Keldor with the extra-dimensional being Demo-Man™ from Despondos™, Keldor was forever changed into Skeletor, Overlord of Evil! He gathered together many of Eternia’s greatest outcasts and evil warriors in his quest to gain entry into Castle Grayskull and obtain what he believed to be the universe’s ultimate power source.

Establishing yet another origin for Skeletor, the Classics canon blended elements from previous media with new concepts. Prince Keldor was the son of King Miro, half brother of Prince Randor, and rightful heir to the throne of Eternia, despite his controversial half-Gar and half-human heritage. The brothers completed a successful campaign during the Great Unrest, but a vengeful Count Marzo banished Miro to Despondos, leaving Eternia without a king. The citizens of Eternia, influenced by an outside force and long-held racism, would not accept the half-Gar prince as their ruler. When Randor found Keldor standing over the murdered form of Randor’s mother, the queen, and professing it had been an accident, he banished his brother from Eternos.

An outcast, Keldor wandered Eternia, dwelling on his brother’s betrayal and the loss of his birthright. He acquired a double-bladed sword that could be split in two and used with one half in each hand. Drawn by a supernatural force, Keldor discovered Hordak’s ancient temple, where the spirit of Hordak appeared and offered to teach him the dark arts. Although Hordak sent him to obtain the Havoc Staff from the Faceless One, Keldor decided its power made him strong enough to leave Hordak’s service and shape his own destiny. Keldor and Evil-Lyn, the Faceless One’s adult daughter, met, fell in love, and were secretly married.

After being mortally wounded in combat against his brother, Keldor was taken by Beast Man and Evil-Lyn back to Hordak’s temple. Created by the Spirit of Hordak, Skeletor was born out of a merging of the wounded Prince Keldor and a chaotic demon from Despondos, Demo-Man. Assuming control of Keldor’s army, Skeletor sought the throne of Eternia. The transformation obliterated Keldor’s love for Evil-Lyn, which earned him her ire, although she still chose to remain with him.

Over many years, Skeletor fought to conquer Eternia and obtain the Power of Grayskull. He fought in the First and Second Ultimate Battlegrounds and successfully acquired the throne for a time, framing He-Man for the murder of King Randor.

During the Second Ultimate Battleground, Skeletor used a spell to drain Hordak’s essence. With his life fading away, Hordak dealt a near-fatal blow to Skeletor, forcing him to absorb the Techno-Organic Virus from the Bionatops and transform into a cyborg infused with Hordak’s power. He left the planet to command the Space Mutants, intent on conquering the Horde Empire and the whole of the universe.

Skeletor spent five years battling He-Man, She-Ra, and the Galactic Protectors until the devastating Battle of Fetra IV forced him to join forces with them against Horde Prime. During the battle, He-Man and Skeletor were transported by the Key Controller to Trolla. There, they fought what they believed was their final battle at the Temple of Power. Calling on the Power of Grayskull, He-Man at last broke the spell that had kept Skeletor alive, splitting him into the separate individuals of Keldor and Demo-Man. Before dying, Keldor wished his nephew well.

Later, a mindless Skeletor was resurrected by the Cosmic Enforcers and the Horde warrior-queen, Despara, using a mysterious staff. When He-Man informed Despara that Skeletor had killed Hordak, the man she believed to be her father, she decapitated the zombified Skeletor. Skeletor would appear on Eternia again when the Unnamed One, during the Third Ultimate Battleground, used a spell to summon the greatest villains of all time to fight at his side.

After Despara decapitated Skeletor’s zombified body, it was taken by Skelcons who placed it in a temple. An obsessed Skeleteen convinced Evil-Lyn and Beast Man to help him find Skeletor’s remains. They eventually brought his corpse to the cave where Keldor’s mother, Saryn, died. There, they used the Havoc Staff and Saryn’s enchanted blood to resurrect the villain. This unnatural act triggered a magical anomaly called the Reawakening, which brought many deceased heroes and villains back to life. Restored to his original state, Keldor feigned remorse for past misdeeds and orchestrated the mystical rebirth of Castle Grayskull. Keldor attempted to seize Grayskull’s magic, but was defeated by King He-Man. Ruing his loss and craving the power he once possessed, Keldor willingly used profane magic to transform himself back into Skeletor.