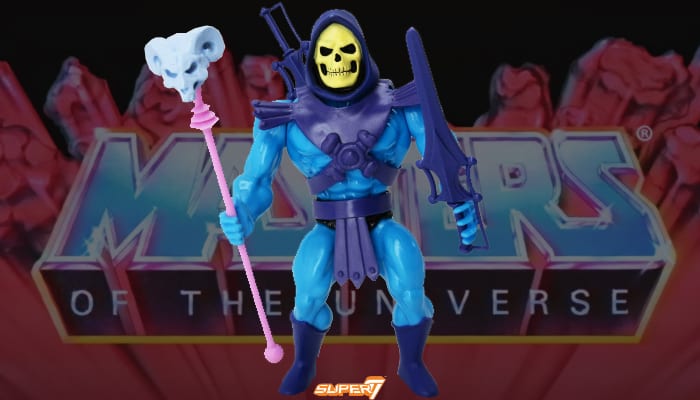 Skeletor action figure from the Vintage Super7 Masters of the Universe toy line. 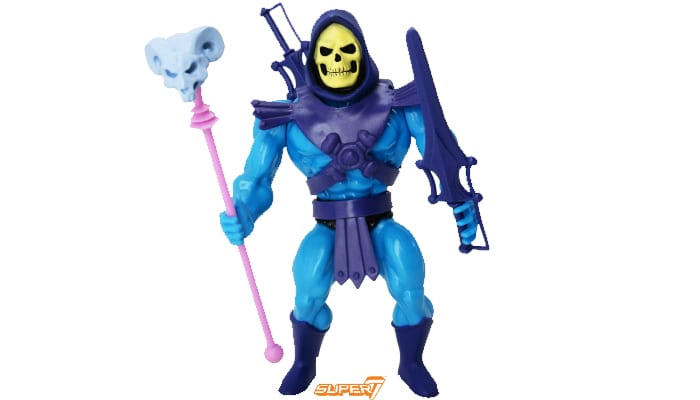 In his earliest depiction, Skeletor terrorized the planet Eternia as a powerful demonic wizard from another dimension. With his blue skin, demon feet, and signature purple-hooded skull, Skeletor established himself as the most fiendish evil villain in the universe. During the Great Wars, a rift opened between dimensions that thrust Skeletor onto the planet Eternia. With a variety of magical powers, an energy blade, and sometimes one half of the Power Sword, Skeletor’s ultimate goal was to unite both halves of the Power Sword to reopen the dimensional hole and lead an invasion force of his species to conquer Eternia. He also craved the power of Castle Grayskull, which would allow him to command the secrets of the universe. Additionally, Skeletor displayed an interest in the warrior-goddess Teela and wished to make her his bride.

In the second wave of minicomics Skeletor was perhaps even more cunning and manipulative than in the first wave of stories, and employed even more magical powers in his efforts to breach the walls of Grayskull. In addition to the aforementioned mystic blasts from his sword, Skeletor could also teleport, take physical control of another person’s body against their will, and concoct horrifying elixirs to turn men into monsters. Perhaps his most impressive act of magic was the creation of a duplicate of the Goddess of Grayskull. Using the Goddess’s power, Skeletor created an infant clone which he intended to control with his own will. Skeletor was relentless in his attempts to enter Castle Grayskull, though he was always thwarted by his mortal enemy He-Man and his heroic allies.

The DC comics portrayal of Skeletor focused more on the demonic aspects of the dark villain. Again, Skeletor sought both halves of the Sword of Power to gain entrance into Castle Grayskull. Skeletor possessed a superior intellect and anticipated every possible outcome while hatching his plots. He successfully achieved his objective and acquired both halves of the Sword of Power through an elaborate plot in which he predicted the actions of both the heroes and villains of Eternia. In one story, Skeletor was impaled by one half of the Sword of Power, with the sword consuming his life force. But this was not the end of Skeletor, as he would reappear in the series.