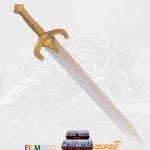 Skeletor action figure from the Filmation Super7 Masters of the Universe toy line.

The original release of this toy line was done by Mattel so Skeletor came with a generic bio that said:

Drawing from both the demonic and interdimensional origins of the character, the Filmation animated series presented Skeletor as a constant threat to the heroes. From his fortress of Snake Mountain, Skeletor sat on his bone throne and commanded a cadre of the most evil villains in the universe. His primary goals were to seize the power of Castle Grayskull, conquer Eternia, and rule the universe. The Filmation series scrapped the plot of uniting the two halves of the Sword of Power. Instead, Skeletor desired the secrets of Castle Grayskull.

As one of the most powerful beings on Eternia, Skeletor used many types of sorcery, from magic spells to teleportation, and his powers were said to increase inside Castle Grayskull. His Havoc Staff was as indestructible as the Sword of Power, and it was often used as a conduit to channel his magic. Many times, he would unleash great magical attacks by using only his index finger. In addition to his sorcery, Skeletor possessed extensive scientific knowledge and developed sophisticated technology that impressed even Man-At-Arms.

In the Filmation series, Skeletor possessed both a sword and a scepter battle axe, though they were rarely used. His sword was striking in appearance, featuring at its hilt the same crossbones seen on his armor. His scepter axe, in addition to being a formidable weapon, could channel his magic to be used for attacks and foresight.

Taking great joy in the suffering of others, Skeletor often preyed on the weak and innocent. He claimed that everything he did was for the sake of evil. Showing little respect for his allies and underlings, he tolerated their hatred because they feared him. He trusted no one and even insulted and punished his henchmen for their incompetence while he continued to rely on them. He often blamed them for his failures.

Little was revealed of Skeletor’s background prior to the events of the series, but it was established that for a time, he had worked alongside the evil creature Monteeg, with whom he overthrew King Archibald. He built Snake Mountain himself using skills he gained from the Golden Disks of Knowledge, which he bribed the wizard Zanthor into selling him. He had apparently been on Eternia for a long time before Prince Adam became He-Man, and at one point even owned farmland, where he forced the enslaved Belots to work for him. Often, evil space travelers knew of Skeletor and sought his aid or offered him their services.