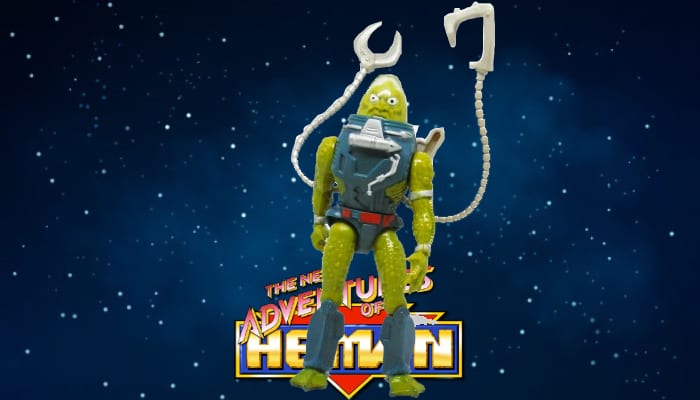 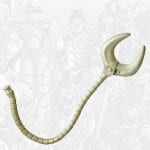 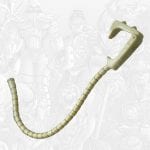 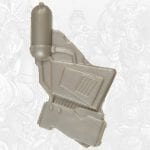 Slush Head is a Space Mutant  with a green body, blue shin guards, and a blue chest plate. He wears a clear helmet and features spring-loaded chop action. He comes with the following accessories::

Slush Head (also known as Kalamaar) was a Mutant enforcer under the leadership of Flogg. Despite his general stupidity, he serves as the second in command to Flogg, and the co-pilot of the Mutant Mothership.

Slush Head is one of Flogg’s many Mutant henchmen, he serves as the Co-Pilot of the Mothership, which effectively makes him Flogg’s second in command. Slush Head is dim witted and incompetent, and often finds himself the subject of Flogg’s anger. Despite this, he retains a close relationship with Flogg and Skeletor, and is one the most loyal Mutants. Unlike the other Mutants, Slush Head is not completely evil, viewing battles and fighting as nothing more than ‘fun’ as well as having a love of music and a more compassionate and honorable side. His bungling, however, has often ruined the Mutants plans.
Slush Head hails from the Quagmi Swamp on Denebria, a place most other Mutants find disgusting because of its deadly creatures and foul stench. Slush Head is most at home in the swamp, and it is also where his family live. When away from the swamp, he must wear a helmet filled with swamp water to allow him to breathe away from his natural habitat.

Though he is often bumbling and incompetent, Slush Head has shown he can be effective and competent in battle. When in battle, Slush Head uses his metal tentacles to grab his enemies and disarm his opponents before they have a chance to fight back. He also possesses a laser axe which functions both as a laser gun and an axe.

Slush Head does not see himself in the same way many of the others Mutants do, as a bumbling oaf, but rather views himself as a heroic and competent leader who is loved by all. In reality, Slush Heads often childish impulses enrage Flogg, Skeletor seems more tolerant of Slush Head, and even takes him with him on several missions. Slush Head is always looking for approval from his superiors, and has often shown he wants Flogg and Skeletor to be proud of him. When Staghorn incited mutiny against Flogg, Slush Head sided with Flogg and attacked the treacherous Mutant in defense of his leader.

Slush Head seems to be the only Mutant to have a personal life outside of the Mutant Space Force, he is engaged to a Mutant female similar to himself named Felca, and they eventually marry.

When the Mutants begin their ‘final invasion’ of Primus began, Slush Head was among the Mutant cornered by the returning Starship Eternia, and refused Flogg’s order to ‘fight til’ the end’. Flogg eventually decided to surrender, and Slush Head witnessed the signing of the treaty which finally ended the war between Primus and the Mutants.