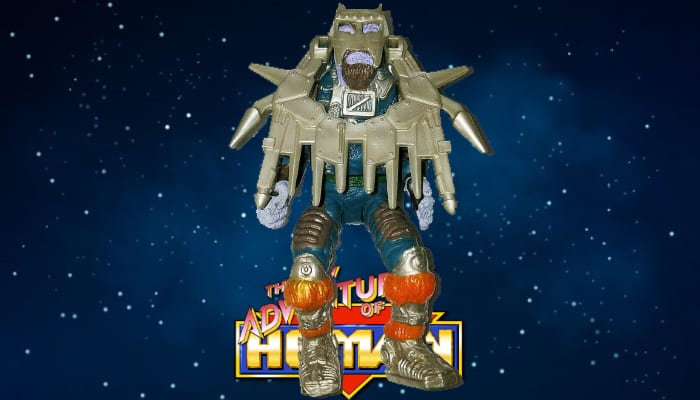 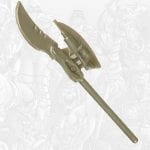 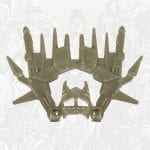 Staghorn is an action figure from the 1991 New Adventures of He-Man toy line. He has a lever on his back that allows his horned helmet to move side to side. He came with the following accessories:

Staghorn features in many episodes of the TV series, mainly as the arch-rival of the Galactic Guardian Sagitar.
Before He-Man and Skeletor arrived in the future to shake up the conflict between the Primans and the Mutants, Staghorn had been causing trouble away from Primus. He raided and plundered the planet Equinos, and while there made an enemy of Sagitar (who wasn’t a Galactic Guardian yet at that time). Staghorn apparently emerged victorious on that occasion, but he and Sagitar continued to harbour a grudge against one another.

In the episode The Festival of Lights, during an intergalactic rodeo-show, Skeletor planned to trap He-Man while having the Mutants disguise themselves as rodeo workers,Staghorn was amongst them. He was surprised to encounter his old enemy, Sagitar, and dropped his disguise, his desire to fight his old enemy forcing Skeletor to enact his plans early and revealing the Mutant presence there.

Staghorn is perhaps the most unstable of the Mutants, his hot headed nature and rivalry with Sagitar have endangered the Mutants carefully laid plans more than once. In Mutiny on the Mothership, when the Mothership was caught in a great storm in space, Staghorn took advantage of the tense situation aboard the ship and planned to mutiny against Flogg, setting himself up as the new leader of the Mutants, he managed to recruit Quakke, BH and Optikk to his cause. But ultimately the mutiny ended when the Mutants were forced to put aside their differences to save themselves. Staghorn is no fool, and has even taken command of the Mutants on missions before. However, during Brain Drain, Skeletor did once use a device on him that increased his intelligence, ultimately the effects were reversed when he and the other Mutants became too intelligent and ambitious.

Staghorn’s rivalry with Sagitar ultimately came to a head in the episode The Running of the Herd, when the Mutants commenced a full scale invasion of the planet Equinos. The Mutants attempted to lure He-Man and the Galactic Guardians into a trap, and succeeded in briefly occupying the planet before being driven back by its native inhabitants and He-Man. Staghorn confronted his old enemy Sagitar once more,but on this occasion, it was Sagitar who was the victor, overpowering Staghorn and hurling him from the top of a cliff into a river. Staghorn, realizing he had lost, screamed in rage violently, as the Mutants were driven from the planet.