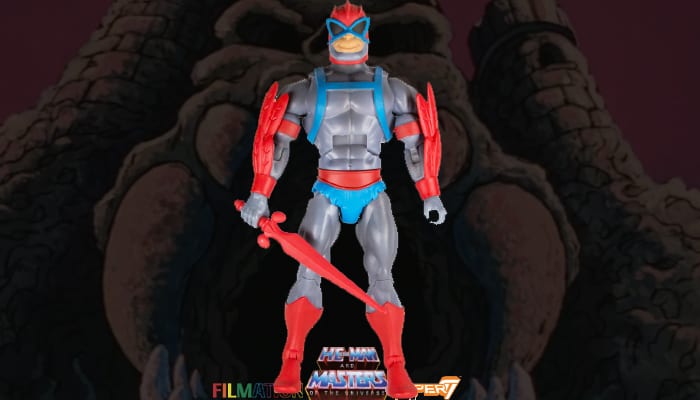 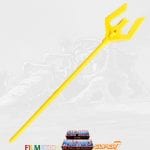 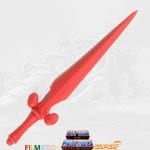 Stratos action figure from the Filmation Super7 Masters of the Universe toy line. 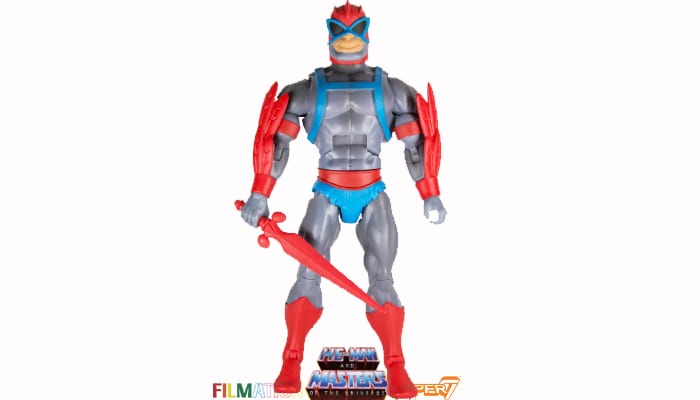 Stratos is the wise and greatly respected leader of Avion, a kingdom that sits high atop the peaks of the Mystic Mountains. Imbued with the power of flight by the Egg of Avion, the speed and agility of Stratos in the air proves to be of great advantage over his foes. On occasion, the leader of the Birdpeople wields the powerful Staff of Avion. Stratos, with the help of Birdpeople like his sister Delora, not only protects his home from the forces of evil, but fights alongside He-Man. with unquestionable loyalty when he is called upon.

Stratos was a stalwart ally to He-Man, capable of soaring to great heights and traversing long distances in the air. He wore weapons on his wrists that projected streams of flame. He made his home atop Eternia’s highest mountain peak, from which he kept an eye out for potential evildoers.

The Filmation animated series portrayed Stratos as a kind and noble leader, respected by his people and willing to sacrifice himself for them. He was the guardian of both the Staff and the Egg of Avion, and though he was not often summoned to aid the heroes, the airborne advantage he provided proved extremely useful in battle. Stratos’s natural power of flight was enhanced by the jetpack he wore. He would lose his power if he did not return frequently to the Egg of Avion. He could project concussive blasts from the palms of his hands, and his wrist cuffs could fire a beam of light that crystallized an enemy.

Stratos is of the Avion species. The Avionians lived in peace atop the mountain peaks of Avion and watched over the Egg of Avion, which gave them the ability to fly—an ability they would lose if they spent a prolonged period away from the egg. The Avionians looked more human in the animated series. They often wielded two-handed guns which shot special pellets. These pellets would explode in midair and produce a cloud of thick smoke.

According to the Grayskull Wiki, Stratos’ portrayal in He-Man and the Masters of the Universe, cartoon series by Filmation is generally consistent with his portrayal in Mattel’s mini-comics. He is the leader of the Bird People, who inhabit the airborne land of Avion, located high in the Mystic Mountains. Although he rules over the Bird People, he is frequently called away from Avion to aid He-Man in his battles against Skeletor.

In the mini-comics, Stratos is married to an ordinary human girl, Delora, who also appears in numerous storybooks of the time. In “Wings of Doom”, by Ladybird Books, she appears as a blonde Avian with blue clothes, but still Stratos’ wife. However, the cartoon makes a significant change to Delora’s character by making her Stratos’ sister rather than his wife, and therefore one of the Bird People as well. This change was made because the show’s producers did not feel their target audience of young boys would react well to love interests within the show. Stratos appears regularly in the early episodes, often fighting alongside Ram-Man. His most significant episode is “Reign of the Monster”, which focuses around his kingdom coming under attack by Skeletor. The episode features the only cartoon appearance of Delora. The story was later adapted into the mini-comic “Siege of Avion”. Despite being established as one of He-Man’s leading battle comrades, Stratos receives little character development in comparison to other characters, and as a result gradually fades into the background of the series, to the point that his character is almost forgotten, his appearances sparse at best. However, in the middle of the show’s second season another episode is written around him: “Betrayal of Stratos”, in which he is exiled from Avion after being framed for a crime by a vengeful Birdwoman, Hawke. This episode reveals that his people gain their power of flight from the Egg of Avion, a large egg, which presumably powers the jetpacks on their backs. Stratos can also fire bolts and beams of energy from his hands.

Mattel originally intended the character of Stratos to be evil, as is evidenced in early, unreleased promotional material for the toy line and a brief cameo in He-Man and the Power Sword. 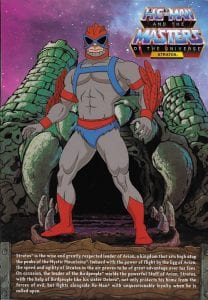