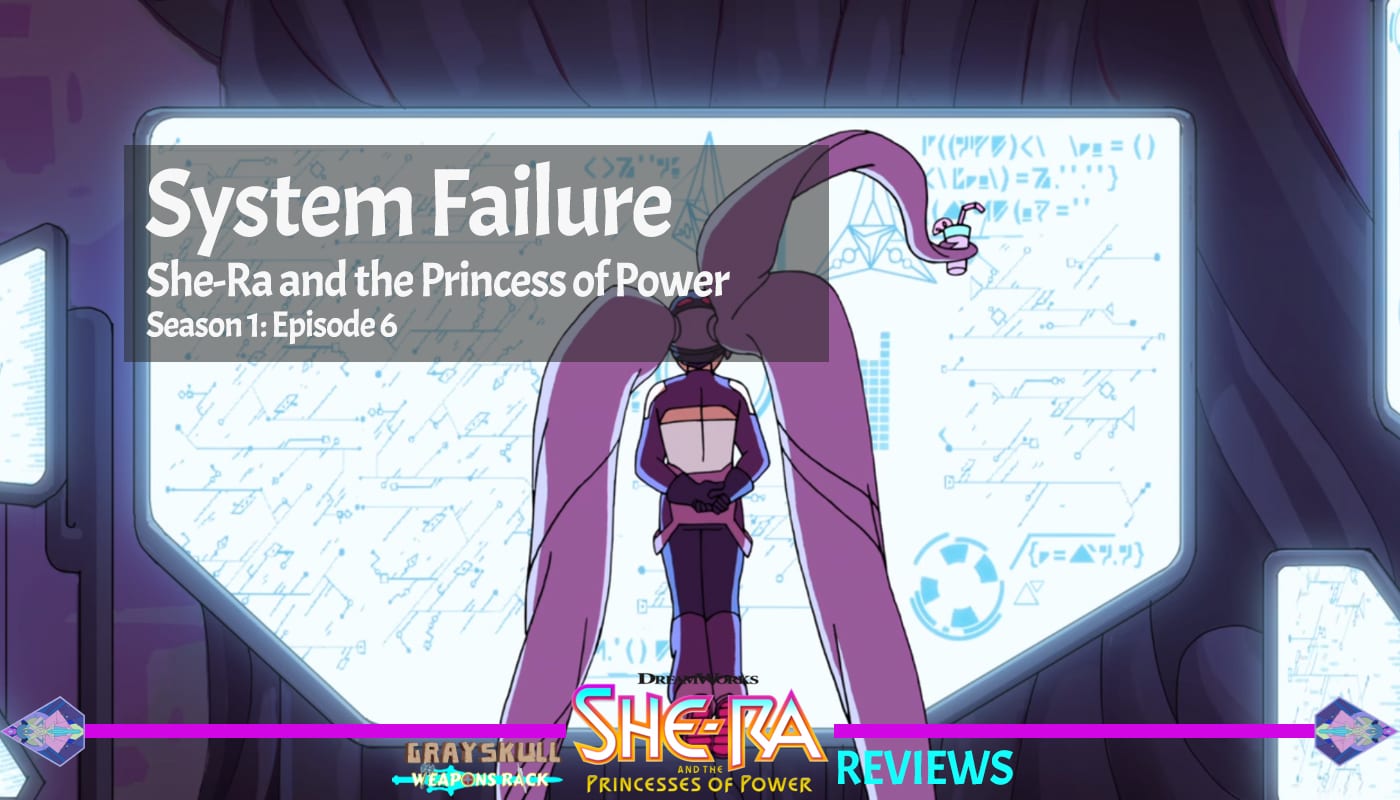 Entrapa diligently works on an experiment in her lab 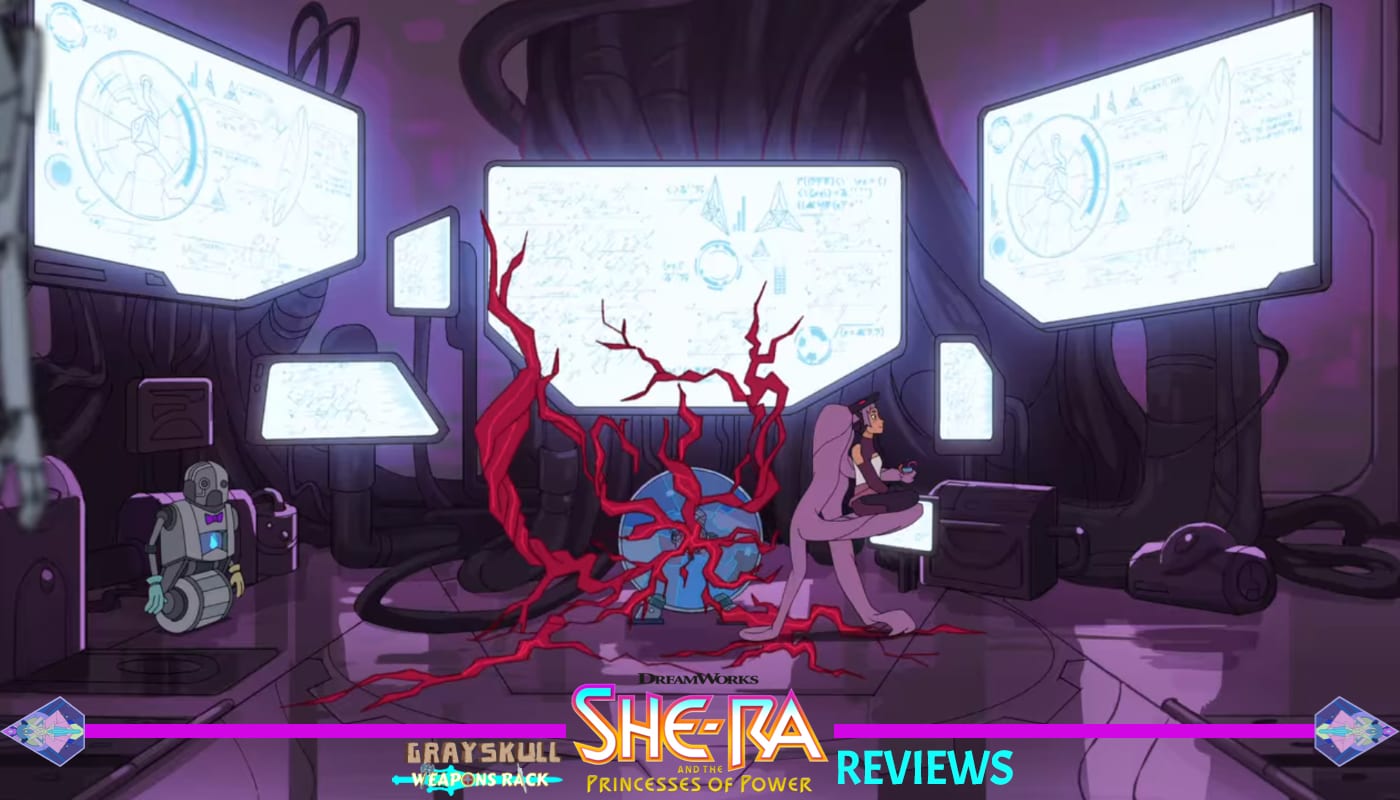 Surrounding herself with tech, robots, and a few Etherian’s, Entrapta  diligently works on an experiment in her castle in the region of Dryl. The robots are helping her clean and they also deliver food while she works on a First Ones’ artifact in her lab. While recording a video message, she alludes to the artifact possibly containing First Ones tech secrets as Red veins begin to spider from the artifact. Thinking that Entrapta has designed something that is responding to the First One’s code, her Robots Eyes turn red as they begin to turn on her. Also thinking that she has made modern technology compatible with ancient technology, a group of robots assemble in front of her, causing her to flee in a panic. 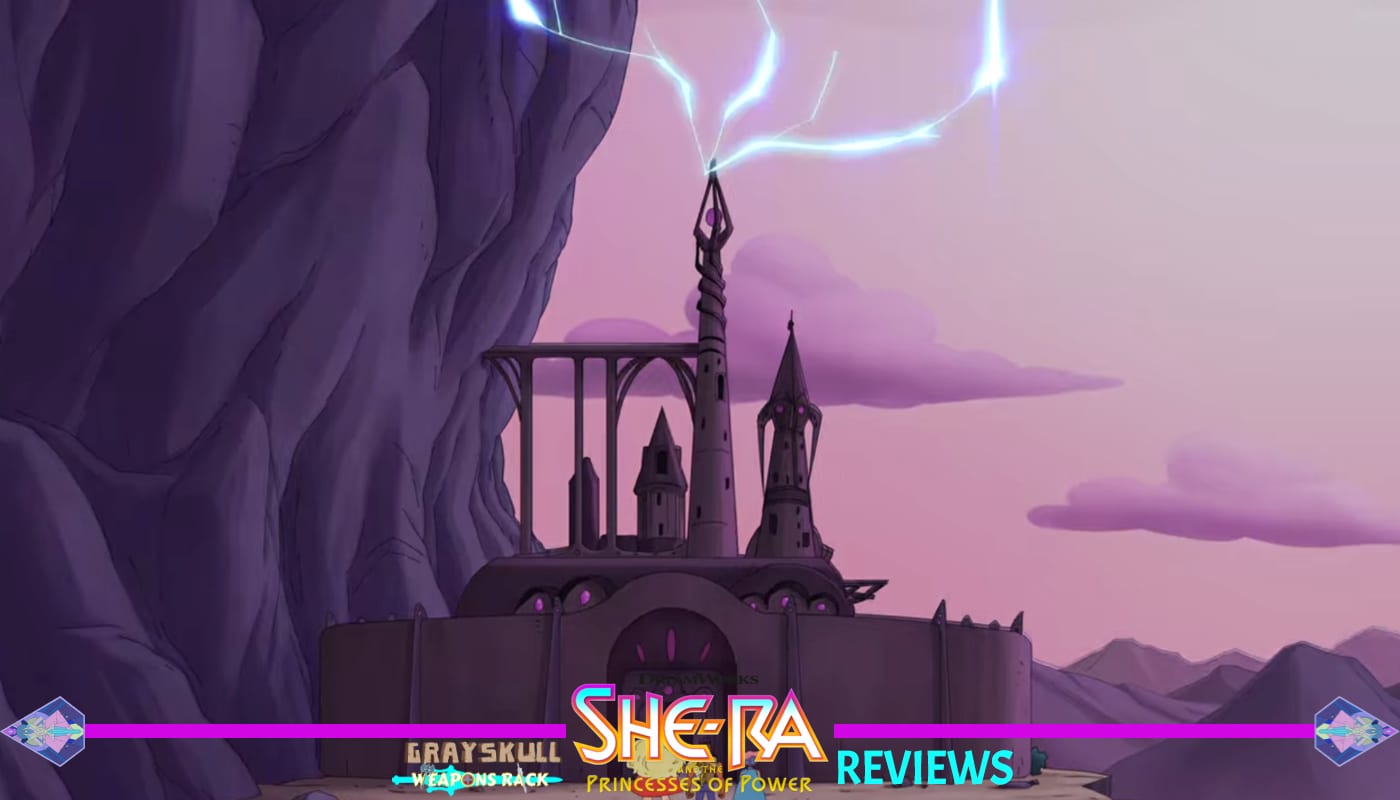 Traveling to the region of Dryl to recruit Entrapta to the Princess Alliance, we learn that Bow is somewhat of a master technician himself, as he shows off a myriad of arrows he created, including the Sonic arrow. Not impressed with the inventions, She-Ra and Glimmer laugh it off as they discover a distress beacon emanating from her castle. We discover early on that Entrapa is not only a skilled inventor, she has devised a series of traps that She-Ra, Bow, and Glimmer encounter as they make their way into the castle to help Entrapta.

Infected robots on the attack 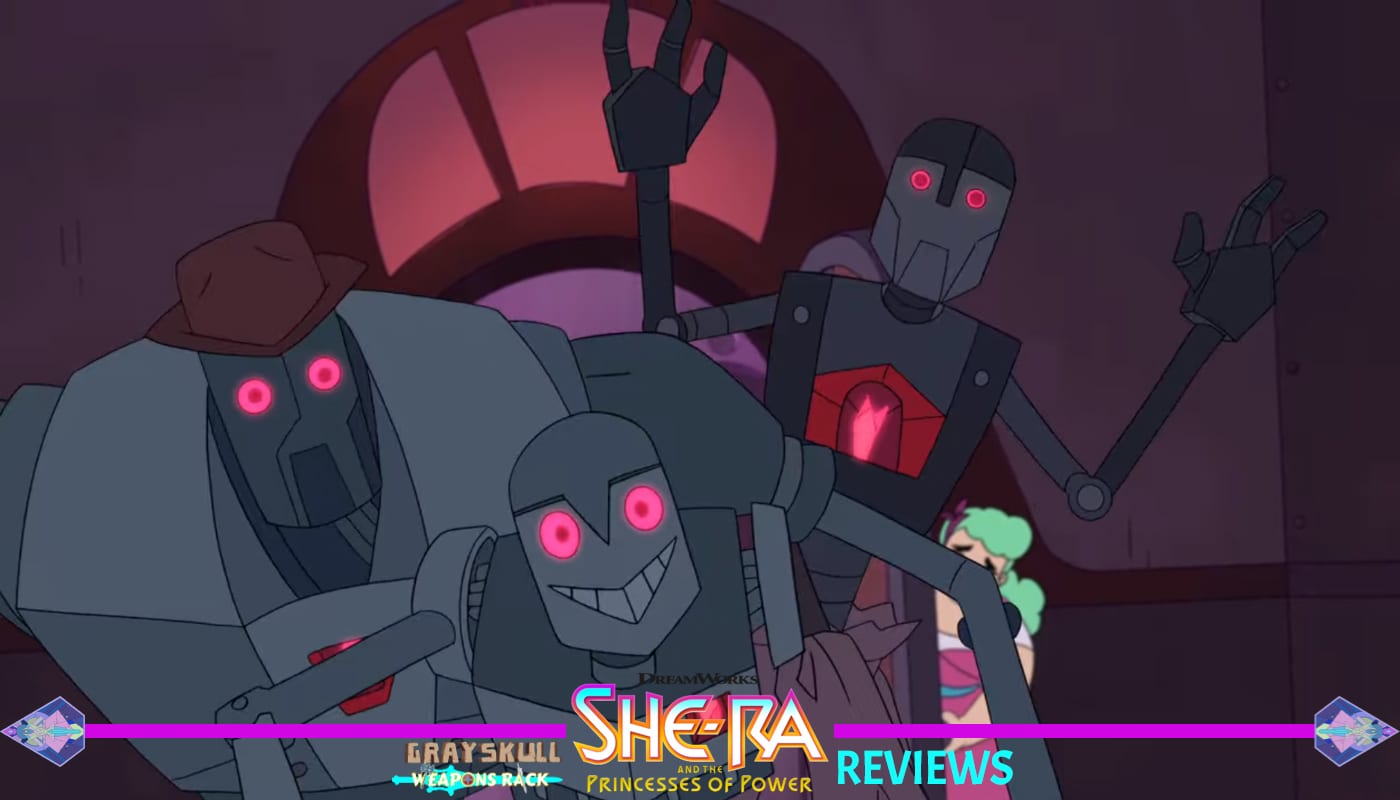 Getting a taste of Entrapta’s experiments, the trio encounters one of the infected robots a calamity ensues as they try and flee and fight the treacherous bots. Getting separated, Bow continues to fight off the evil robots with the three people who work in Entrapta’s castle while Glimmer and Adora fall into one of the traps, leading them to meet Entrapta. 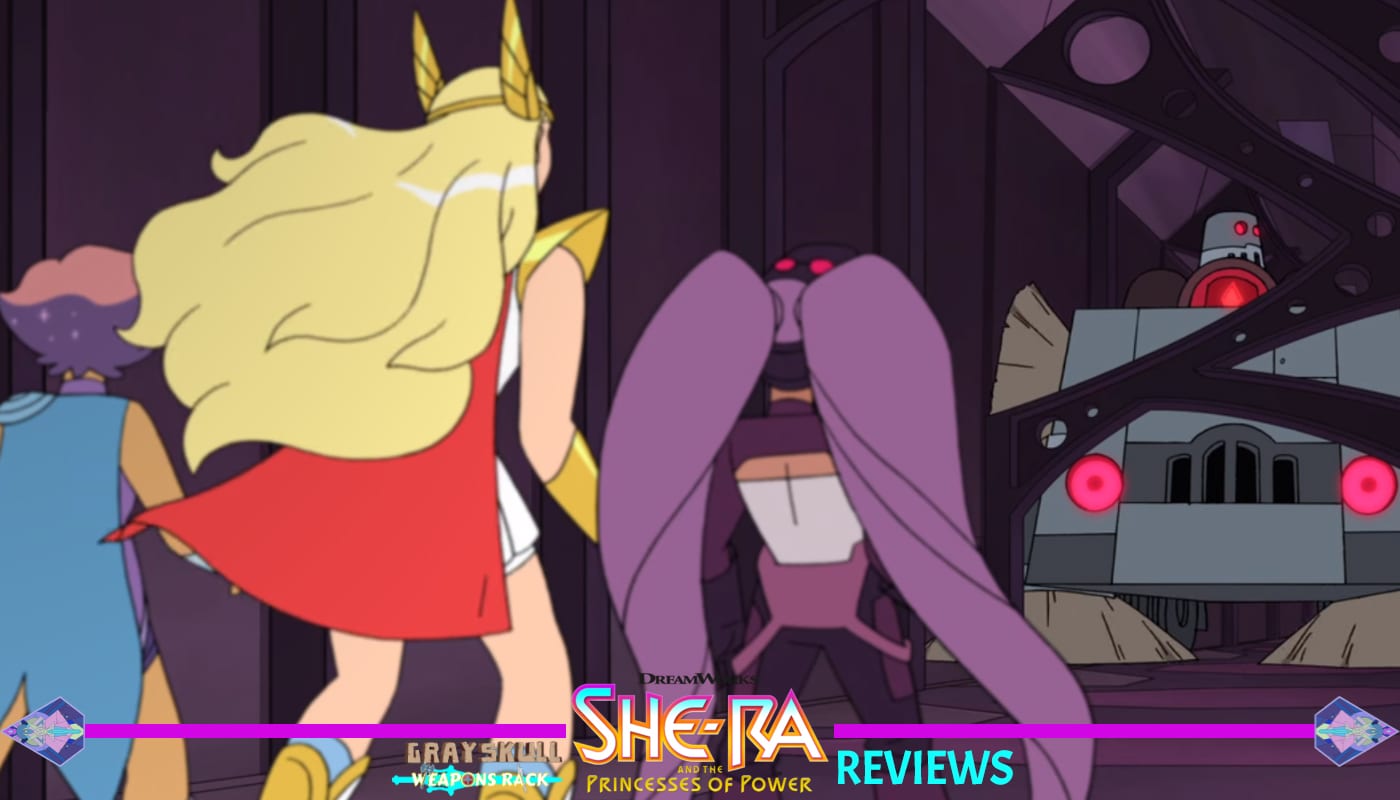 Having activated a giant cleaning robot that looks a lot like a Zamboni, it begins to attack them and a persuit ensues within the castle that has the three running for their lives until the evil machine is ensnared in a trap, giving them some breathing room to devise a plan. As Adora has transformed into She-Ra, she rushes in to destroy the robot but faces unintended consequences of her actions.

She-Ra gets infected by the tech

As She-Ra attempts to destroy the bot, she drives the Sword of Protection into it’s power source and infects both the sword and herself in the process, causing She-Ra to go on a rampage until Glimmer wrestlers the sword away from her, transforming her back into Adora. Feeling the effects of the infection, Adora is in a stupor as Glimmer and Entrapta take her away to find safer ground. Needing to get back into the lab to halt the madness, the three are left to find a way in as Entrapta has booby-trapped the entrance, outsmarting herself. At the same time, Bow and the three Etherian’s are in a fight of their own as they defend themselves with anything and everything can as Bow dubs the people part of The Rebellion.

The heroes make their way into the infected lab 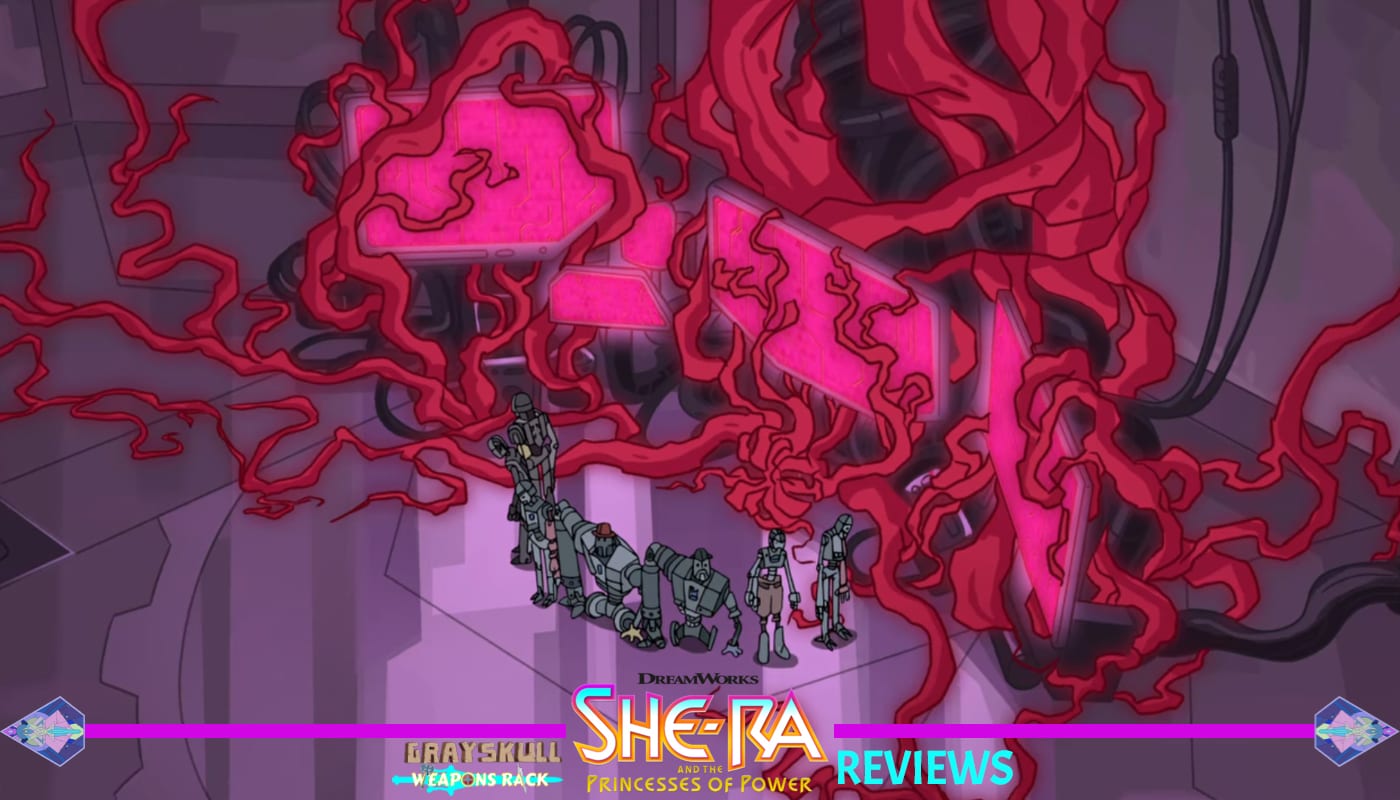 The six heroes finally make their way into  the infected lab, where they discover that the disk has built up a protective barrier. Entrapta and Bow decide to unplug the power source but the disk begins to power itself and become an independent source of energy. Saving Bow from certain death, Entrapta whisks him in the air with her hair to escape the evil, infected robots.

Bow’s sonic arrow to the rescue 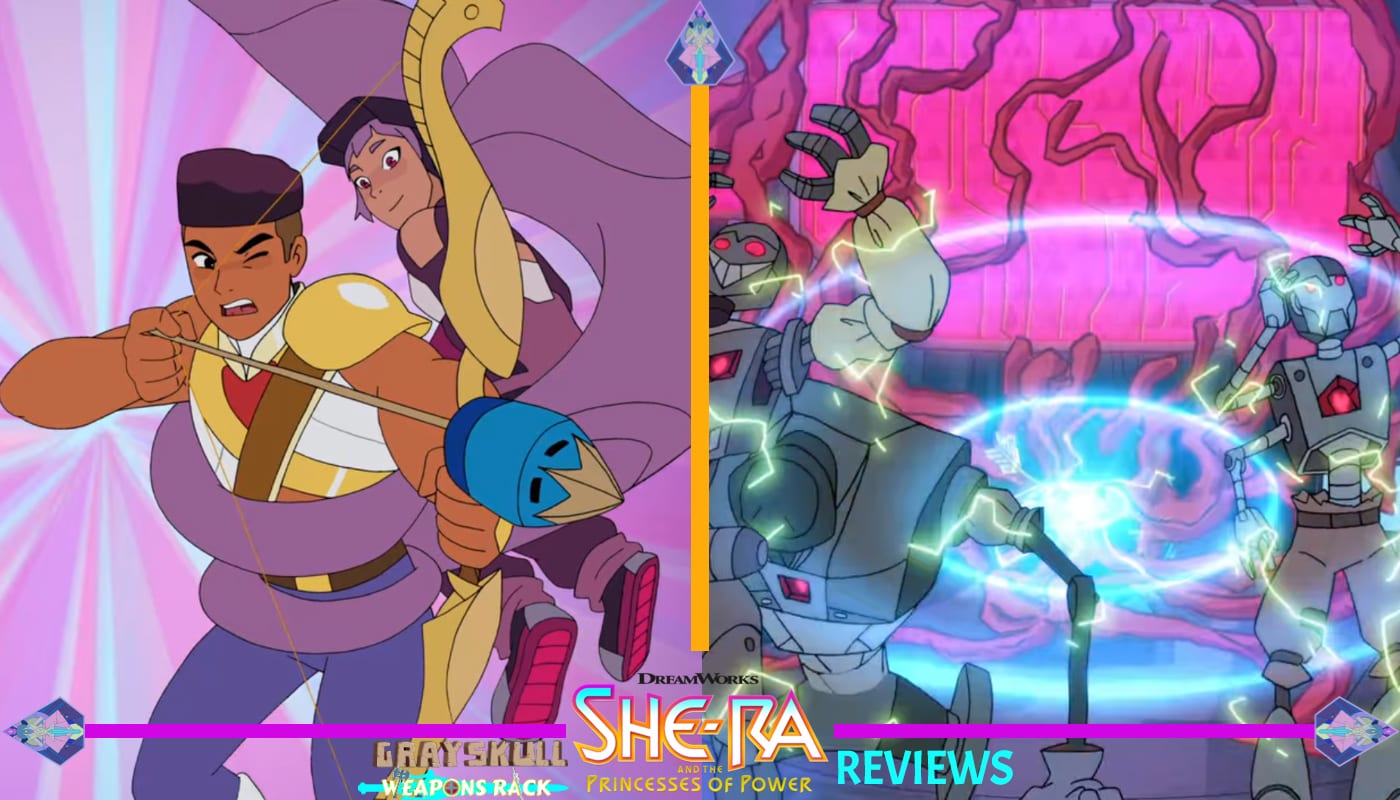 As a last resort, Bow relies on his new Sonic arrow to save the day as he skillfully hits a bullseye dead center in the disk, causing the bots to turn their attention to the arrow. Trying to attack the arrow, the bots inadvertently break the disk, curing the infection, saving the day as the bots are deactivated and the Sword of Protection is and Adora are decontaminated.

Entrapta finally agrees to become part of the Princess Alliance so she can build weapons for them but, being the amazing scientist she is, Entrapta learns from this failed experiment and attempts to repair the disk while the trio return home to Bright Moon.

This episode was contained to one region focusing one character but there was a lot going on! We finally met Entrapta and learned that she is smart and in love with tech. She almost has a mad scientist vibe to her character, which gets herself and the trio in a bit of trouble. This episode feels like it could be taken out of the Terminator canon as a disk that Entrapta possesses causes the servant robots she created to become self aware and attack. This episode really focused on the development of Entrapta’s character, which was a nice change of pace as the focused story allowed fans to discover a more in depth view of this Princess scientist. One my pet peaves with the original 1980’s Filmation series is that character developement was lacking but the Dreamworks version has done an amazing job allowing us a deeper view into the minds of people of Etheria.

Entrapta as she appears in the Dreamworks Netflix series vs. 1980’s Filmation cartoon 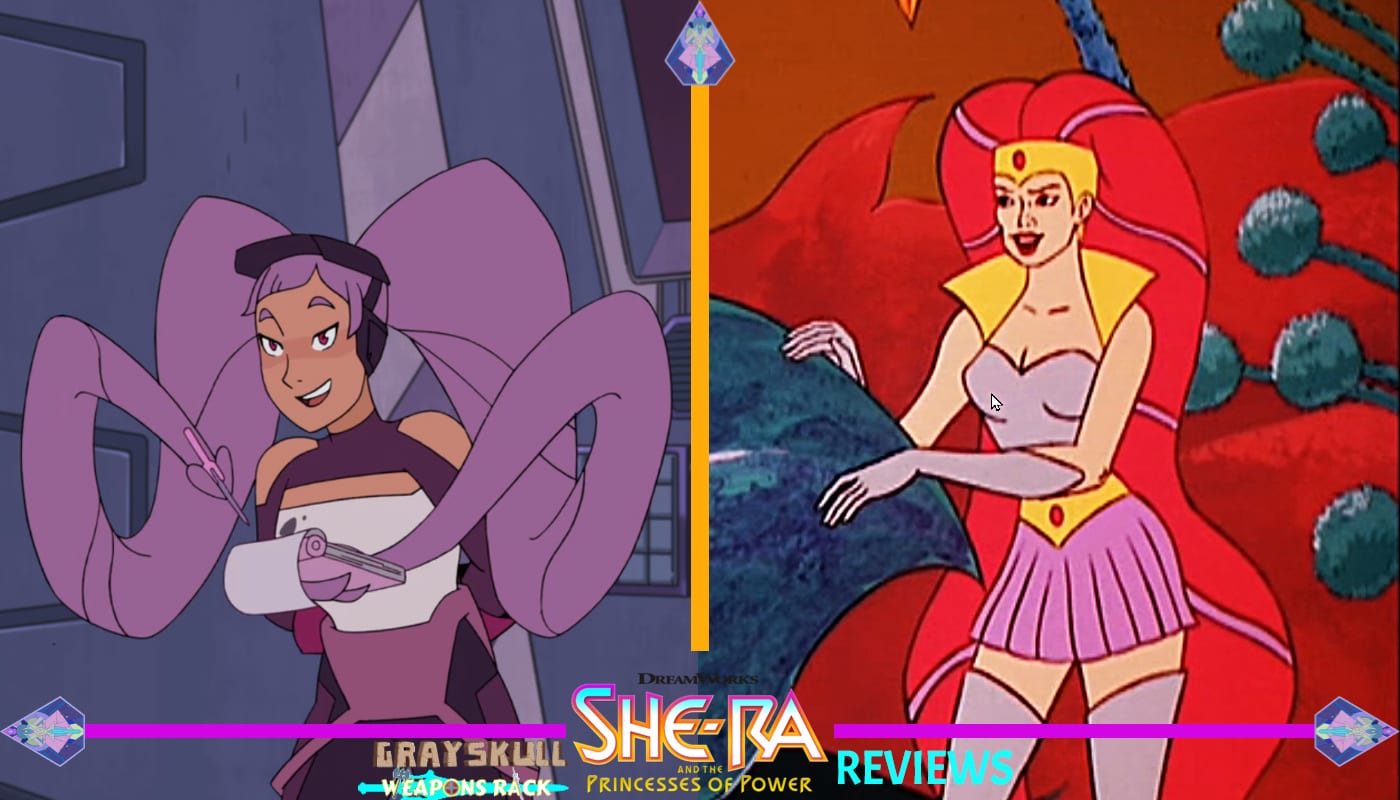 The Dreamworks version of Entrapta retains the long hair although it seems that she has control over it and uses her locks to walk, write, and think while she is running experiments. She is extremely intelligent but seems oblivious to what is going on around her as she concentrates on her research.  As a scientist, she finds learning in most everything she does, despite frequent scientific set backs or experiments gone awry. Aligning with the Princess Alliance, she wants to continue building devices to aid Glimmer in her quest to rid the Etheria of the Horde. Similarly, the 1980’s Filmation version of Entrapta has her as a villainous technician her allegiance is working for the Evil Horde.  She is a skilled inventor and designs advanced equipment for The Horde to deploy in their battle against The Great Rebellion.

Rise of the machines

Having alluding to this episode feeling like a scene out of the Terminator franchise, there are some similarities in how the evil infected bots become self aware and turn on their inventor. If you are not familiar with the Terminator series, there are many canons have developed since the first movie premiered in 1984 but I will focus on the original timeline for simplicity. In the Original timeline, Cyberdyne Systems, an advanced computer processor company, reverse-engineered and develop robots from the scavenged hand and CPU of the destroyed T-800 in 1984. Ultimately impressing investors, they were able to finance the Skynet project to improve robotics technology to aid in advancement of military technology. In short, Skynet eventually becomes self aware, turning on humanity and creating a series of killer robots bent on wiping out the human population. A similar event happens in this episode and if you have made it this far, you are well aware of the events that ensued.