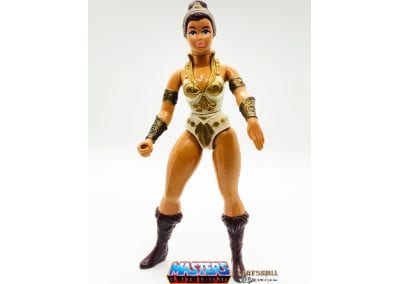 Teela action figure from the vintage Masters of the Universe toy line. 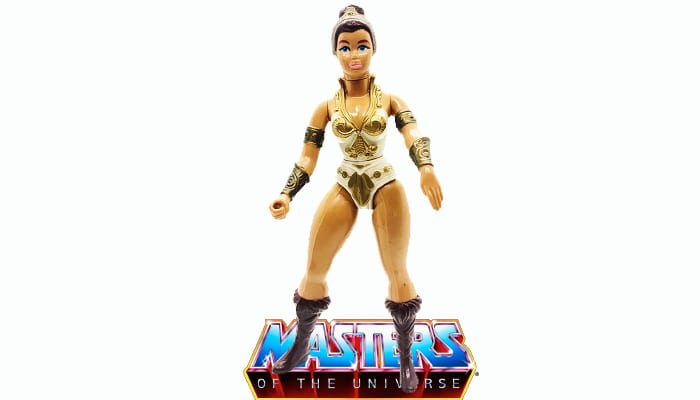 In Teela’s first appearance, she was depicted as a blond warrior-goddess who fought ferociously against her enemies. Her body possessed the spirits of many ancestral champions. She rode across Eternia astride a unicorn charger and was a loyal friend to He-Man. The Spirit of Castle Grayskull revealed to Teela that she would become the guardian of Castle Grayskull one day, a title she would be honored to accept.

In the second wave of minicomics, Teela was revealed to be a clone of the Goddess created by Skeletor twenty years earlier. Man-At-Arms adopted the cloned infant, named her Teela after the Goddess’s real name, and raised her as his own daughter, training her as a warrior. As an adult, Teela was an expertly trained combatant with advanced battle skills. A romantic attraction between Teela and He-Man was implied in their dialogue.

The Filmation MOTU series presented a revamped backstory for Teela. Years before the appearance of He-Man, Man-At-Arms prevented Mer-Man from sacrificing Zoar to the sea demon Bakkull. Afterward, Man-At-Arms discovered a baby girl—the Sorceress’s daughter Teela—in Zoar’s nest. The Sorceress explained that she was unable to raise her daughter herself while she was faced with the enormous responsibility of guarding Castle Grayskull. Man-At-Arms became Teela’s adoptive father and raised her at the Royal Palace. As she grew, she was taught battle skills by Man-At-Arms and learned the courtly ways of palace life. As a teenager, Teela was taught in the City of Wisdom with the wizard Mallek, where both excelled in their studies. Mallek harbored romantic feelings for Teela, which she did not reciprocate. The strong-willed, independent Teela eventually became a highly respected captain of the Royal Guard. Her youthful hotheadedness and desire to take action occasionally led her to disobey her father’s orders. While searching for details about her past from the Oracle of the Crystal Sea, Teela learned that she was the daughter of the Sorceress of Castle Grayskull and would one day inherit her mother’s role. After she learned this, her memory of this knowledge was magically suppressed by the Sorceress for Teela’s own benefit. Teela had a subconscious bond with her mother, and although she could not understand it, she could often feel her mother’s love. Still unaware of her destiny, Teela temporarily assumed the role of Sorceress on one occasion, when the Sorceress was banished to another dimension by Skeletor. Teela’s relationship with Prince Adam was a complicated one. Though they were often like siblings, they harbored romantic feelings for one another and often behaved like a couple who had never managed to progress their relationship. Teela was unaware that Adam and He-Man were one and the same, and often grew annoyed at Adam’s apparent laziness, sharing his father’s disappointment in his supposed lack of responsibility. She had a great romantic attraction to He-Man and often wished Adam could be more like him. On several occasions she flirted with He-Man, and she felt that her ideal man would be someone with Adam’s wit and He-Man’s courage. On one occasion she even let He-Man carry her all the way back to Eternos, under weak, halfhearted protests. Teela carried a number of gadgets, weapons, and other tools with her. Among these were a grappling hook and a bolas. Her staff, unlike in other portrayals, was not cobra themed. Instead, the staff lengthened or shortened as needed, and there was a second version with a diamond at its top.