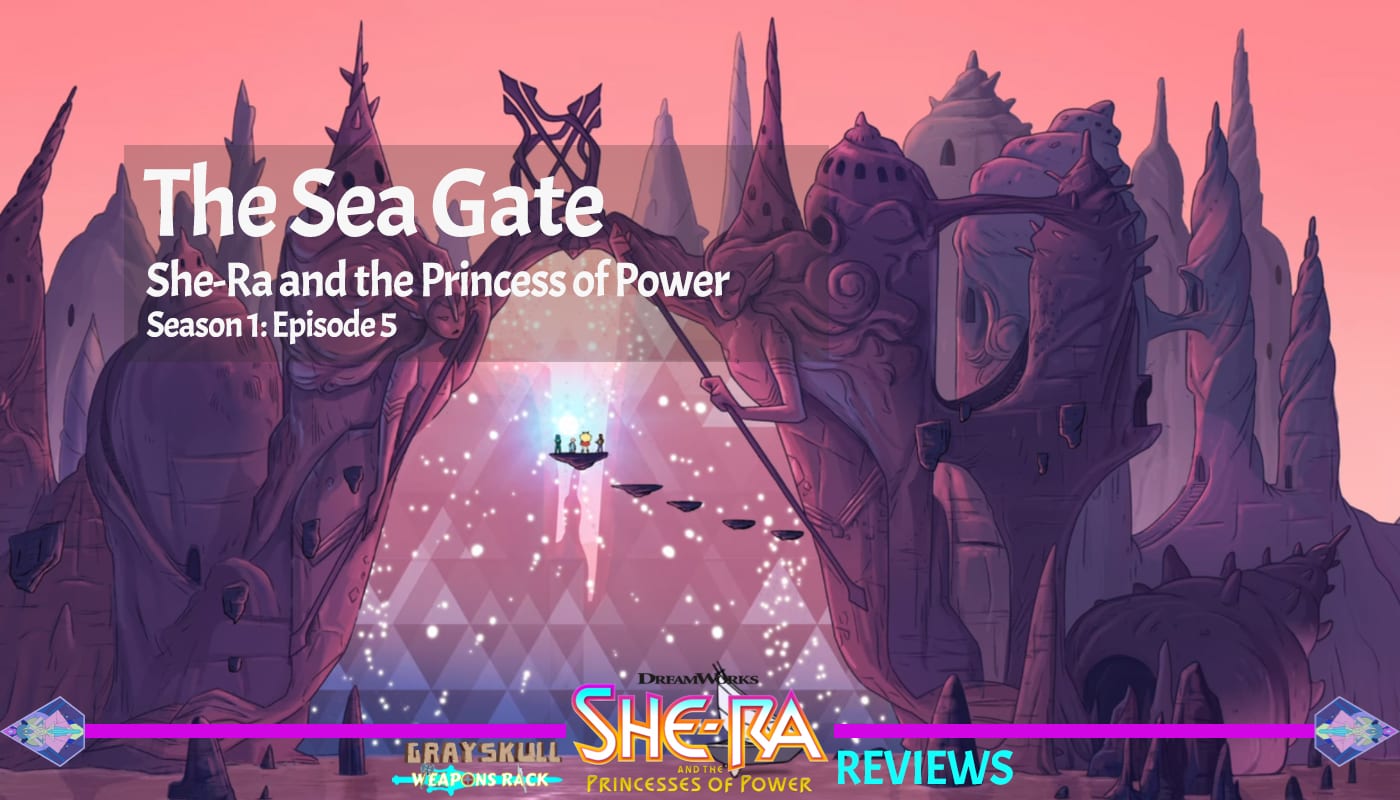 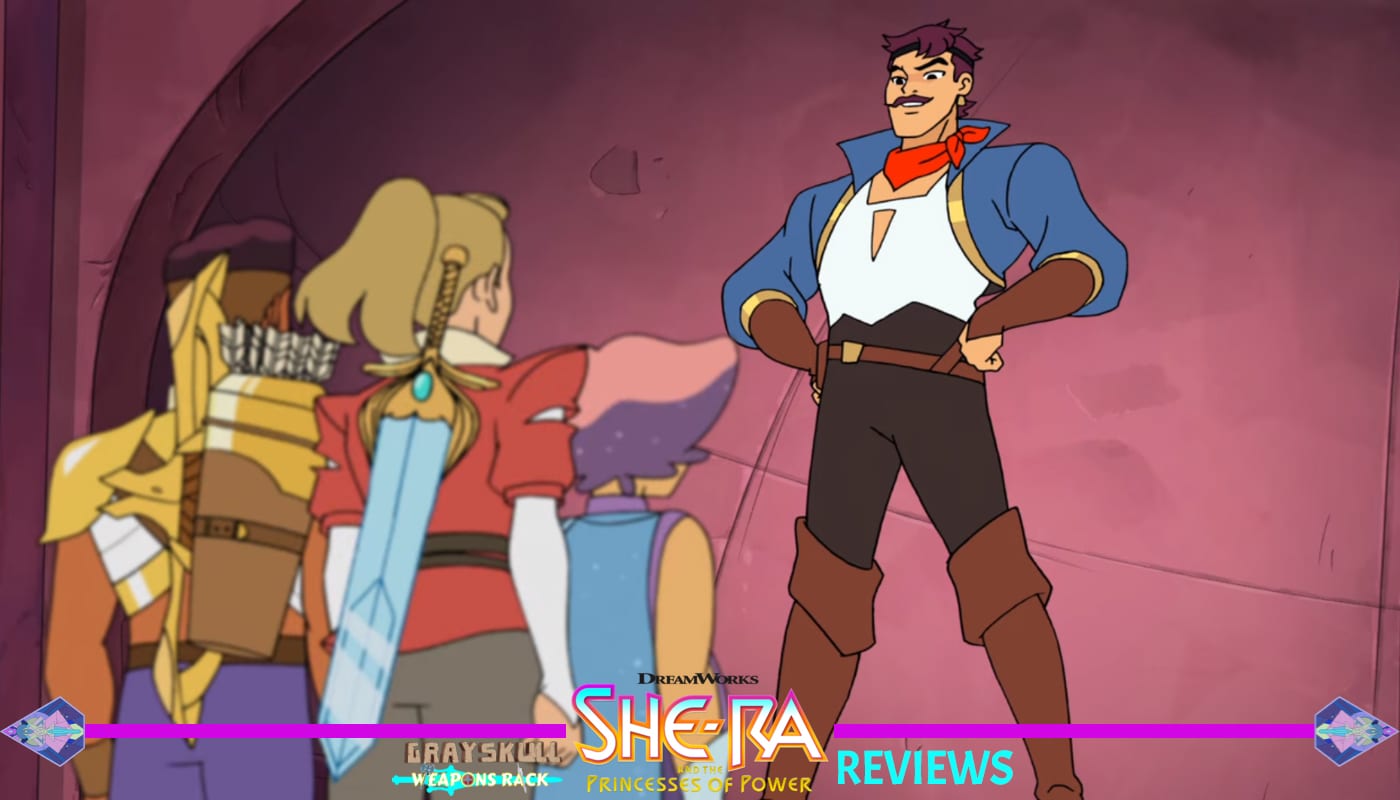 The title of this episode, The Sea Gate, is eerily familiar to the seventh episode of the 1980’s She-Ra and the Princess of Power episode by a very similar name, The Sea Hawk. The episode opens up in the war room where Queen Angella solicits input on next steps in the rebellion against the Horde. Volunteering herself, Adora, and Bow, Glimmer wants to head for the watery land of Salineas to enlist Princess Mermista to begin to reform the Princess Alliance, to the begrudging agreement of Queen Angella. Landing them in the coastal town of Seaworthy, the trio set off to find a captain to take them to Salineas.

Captain Sea Hawk as he appears in the Dreamworks Netflix series vs. 1980’s Filmation cartoon 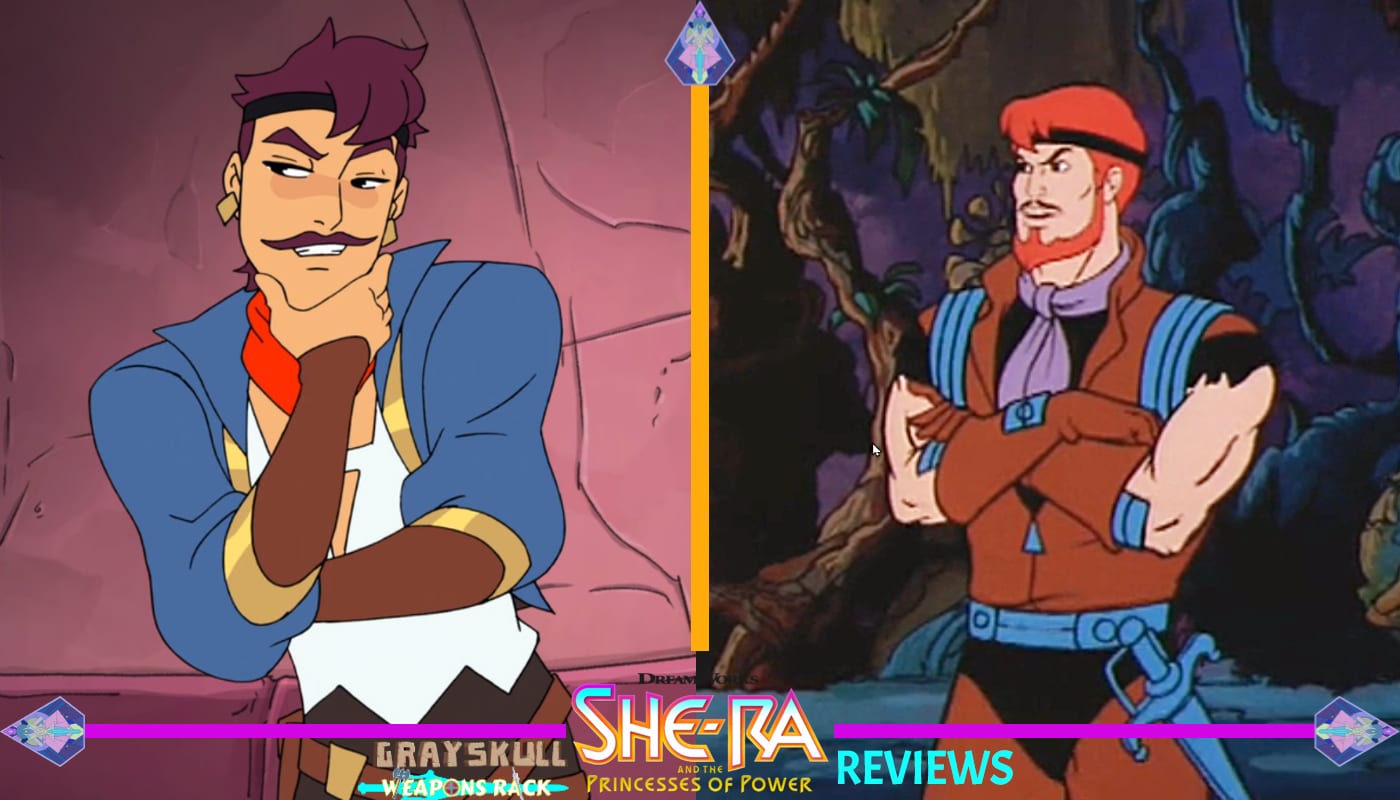 In sharp contrast to his 1980’s persona, Sea Hawk is a darker haired man with a “naturally shiny” handlebar mustache who is charming, full of himself, self aggrandizing, and loves to bust out in a sea shanty whenever possible. His presence is larger than himself but is always up for an adventure! His 1980’s Filmation persona is a  a skilled sailor and swordsman who was more interested in plundering the seas of Etheria. 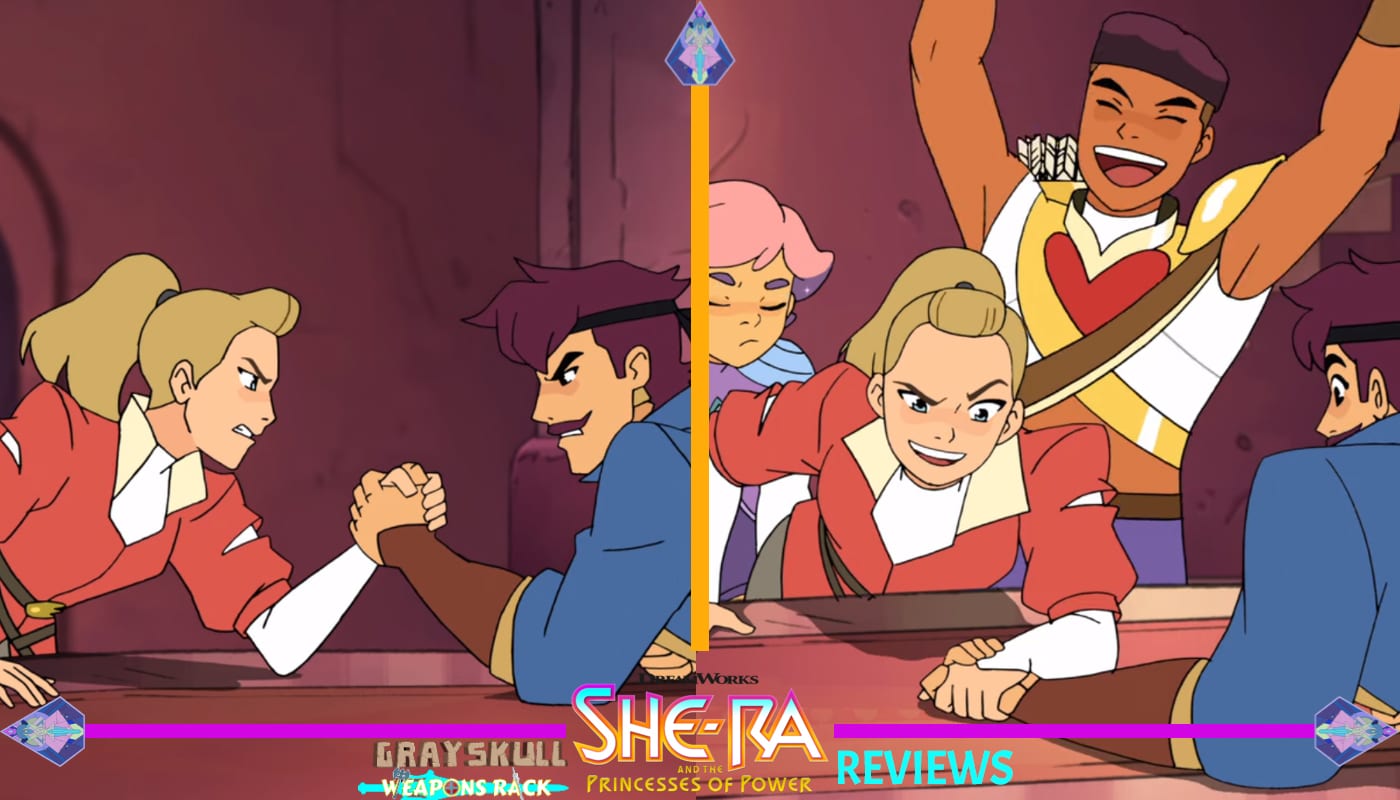 In need of a captain to escort them across the seas, they convince none other than he infamous (in his own head) Captain Sea Hawk to join them after Adora beats him in an arm-wrestling contest. The trio soon discover that Sea Hawk might not be all he’s cracked up to be after he alludes to setting his two previous ships ablaze in a fiery glory. Claiming to have a very close relationship with Mermista, Sea Hawk and his new crew of Adora, Bow, and Glimmer set off to the engage Mermista in the land of Salineas.

Scorpia is a hugger! 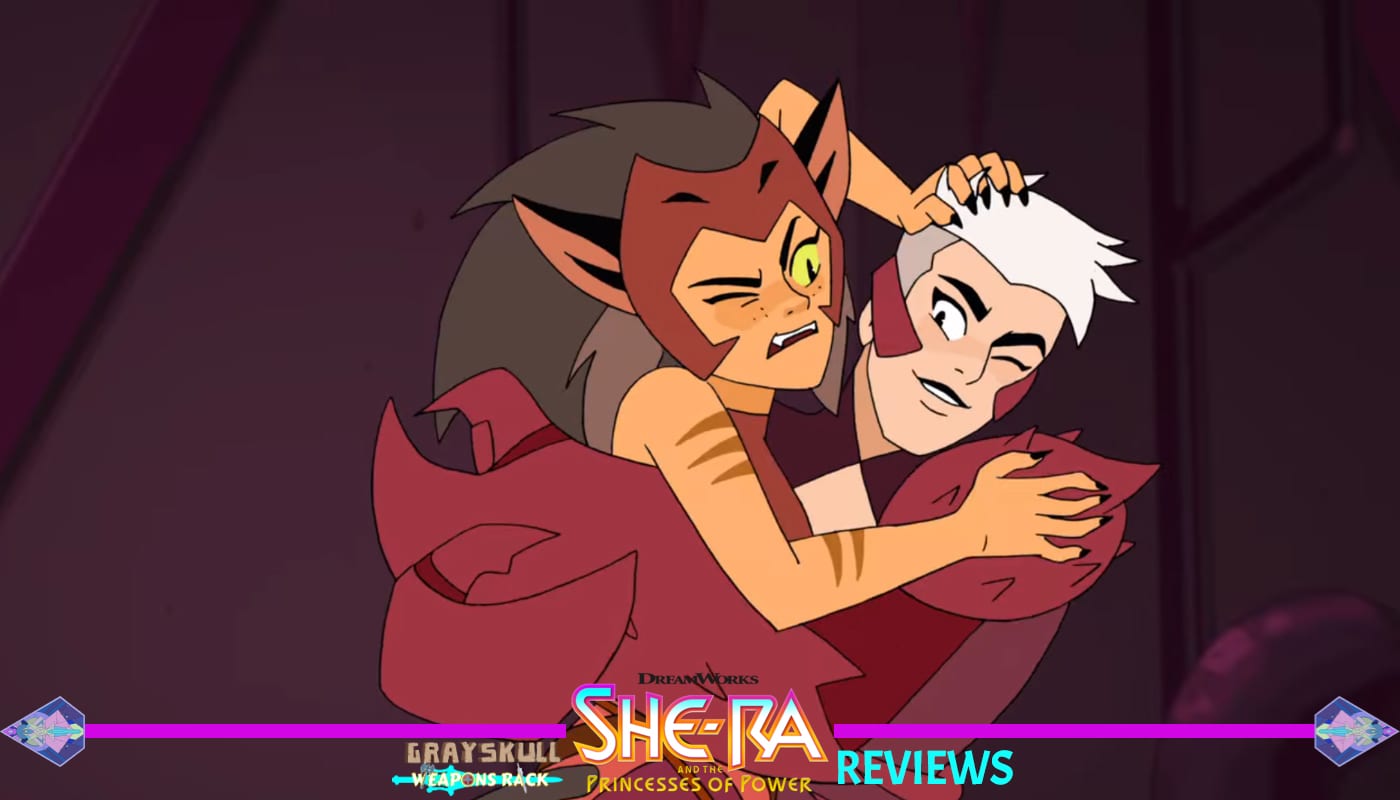 Cutting back to the Fright Zone, we learn that Shadow Weaver has been spying on the Trio’s expedition to Seaworthy and soon discvover that the trio and their newfound captain are planning a trip to visit Princess Mermista. Bent on getting Adora back to the Horde, Shadow Weaver enlists the help of a familiar Horde Force Captain by the name of Scorpia.

Scorpia as she appears in the Dreamworks Netflix series vs. 1980’s Filmation cartoon 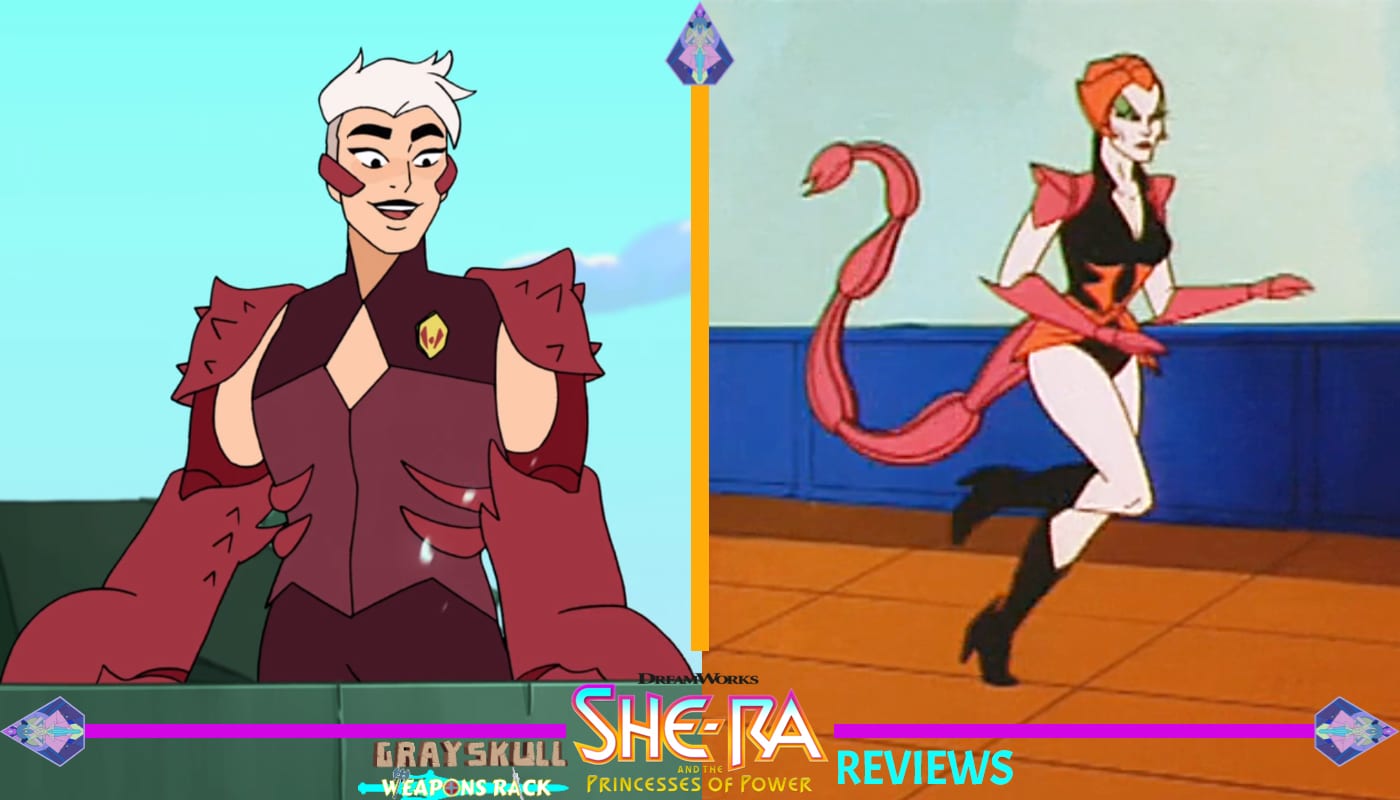 In sharp contrast to her 1980’s Filmation persona, Scorpia is a kind, sensitive, and naive Force Captain, who does not exhibit malice compared to her Horde counterparts. She is determined and dedicated as a member of the Horde but what she lacks in skill for battle is made up by her innocent nature, which makes you want to love her even more. She retains a similar look with pincer claws and a stinger tail but this updated version of Scorpia has a much bulkier build, which ads to her overall characters appeal. Her 1980’s persona is similar in personality as she is not the most intelligent member of the Horde and is easily fooled and her behavior, speech cadence, and overall lack of cunningness remind me of Ram Man’s character from the He-Man and the Masters of the Universe cartoon series.

Sea Hawk’s ship goes out in a blaze of glory 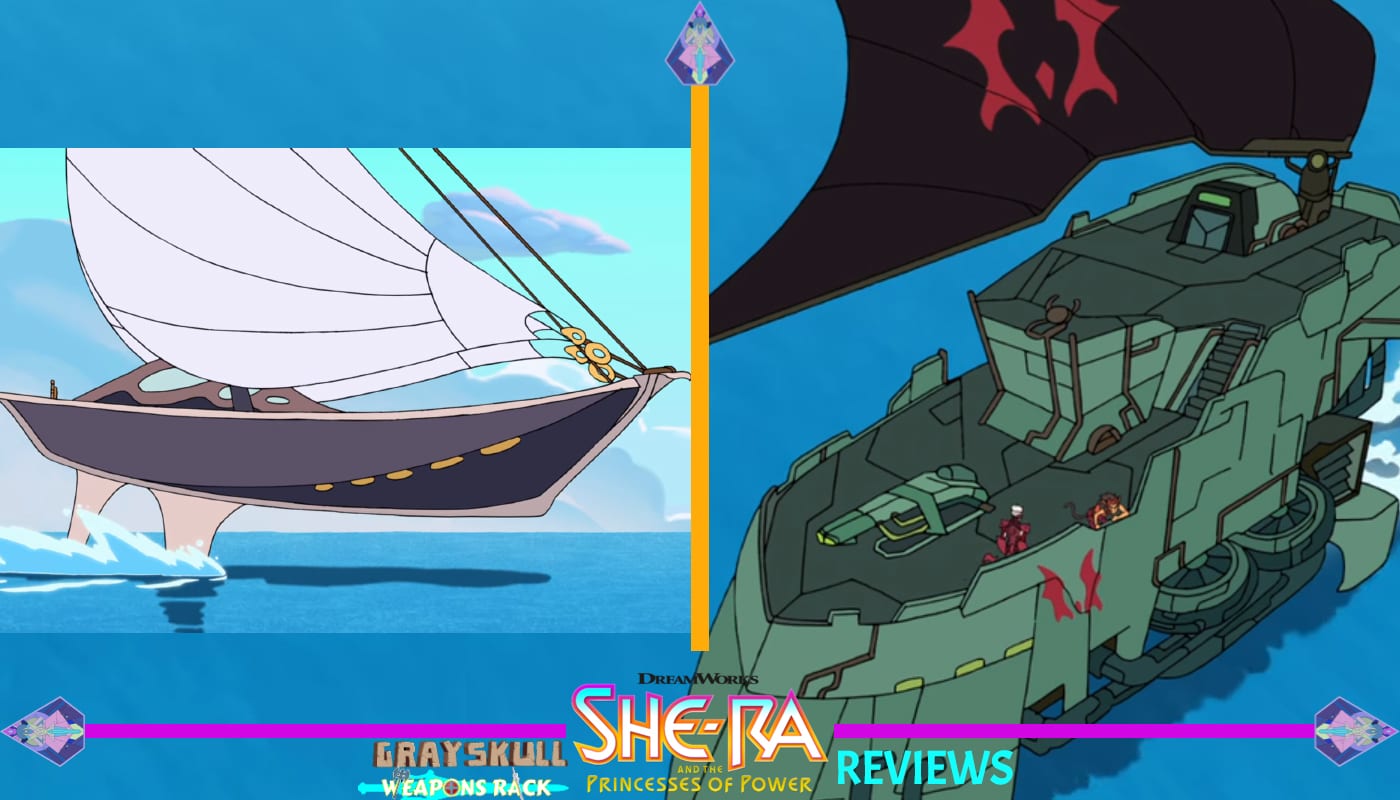 Via the Straights of Serpentine, the trio and Captain Sea Haw sail on his boat, the Dragon’s Daughter III as we learn that he has a really bad habit of setting his vessels ablaze as a move to secure certain victory. Impressing Sea Hawk with their whip board skills, the trio is first introduced to Sea Hawk’s uncanny ability to break out in a sea shanty, claiming that everyone loves these types of numbers. 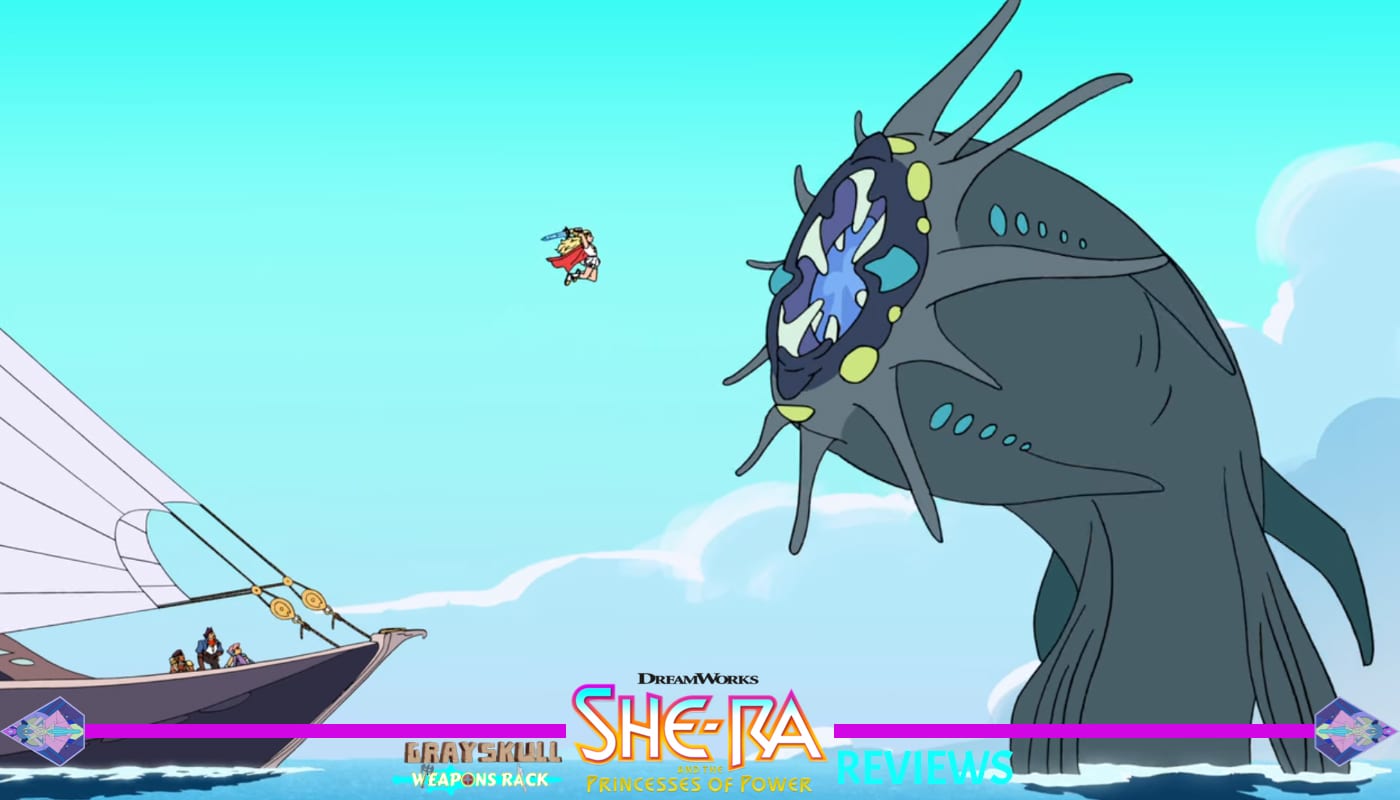 All about the adventure, we learn that Sea Hawk purposefully brought them out of the way to experience what it is like to live your life on the edge. In a scene similar to the 1975 Jaws movie, we see a large shadowy being below the water, which causes much concern to the Trio but Adora quickly transforms into She-Ra off camera in a blaze of yellow light. Still getting used to her newfound powers, She-Ra dives headfirst into battle, taking on a giant sea monster but defeats the beast with a quick sowrd strike to the teeth and surfaces as Adora in the water as she gained the upper hand.

To her surprise, Catra spies the Salineas Gate 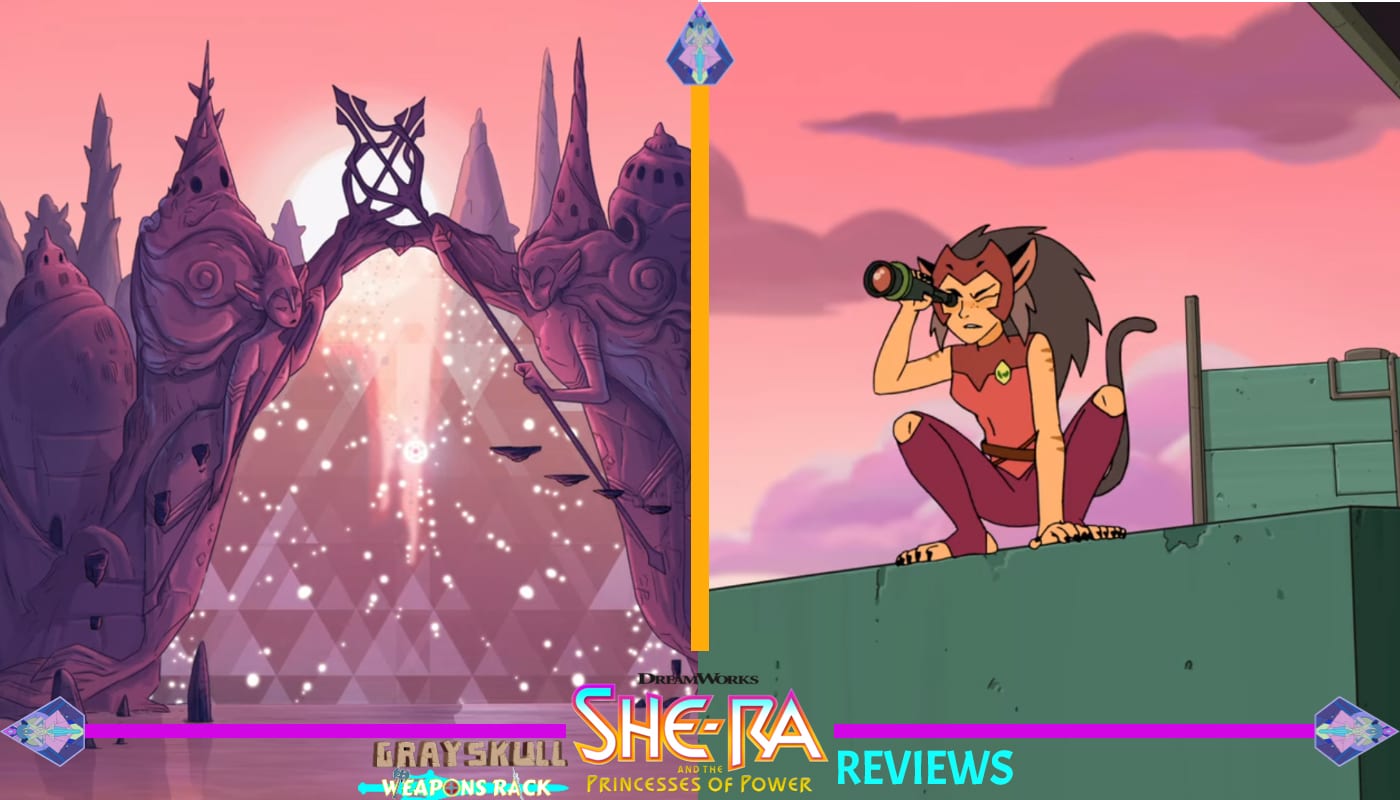 Meanwhile, back on the Horde vessel, we learn that Shadow Weaver leaves out a very important piece of information that there was a giant sea gate impeding their entry to coastal region. Having arrived before the heroes, Catra and her crew are not happy that their path  to the castle is blocked and are visibly upset by Shadow Weaver’s oversight.

Arrival to the castle of Salenias 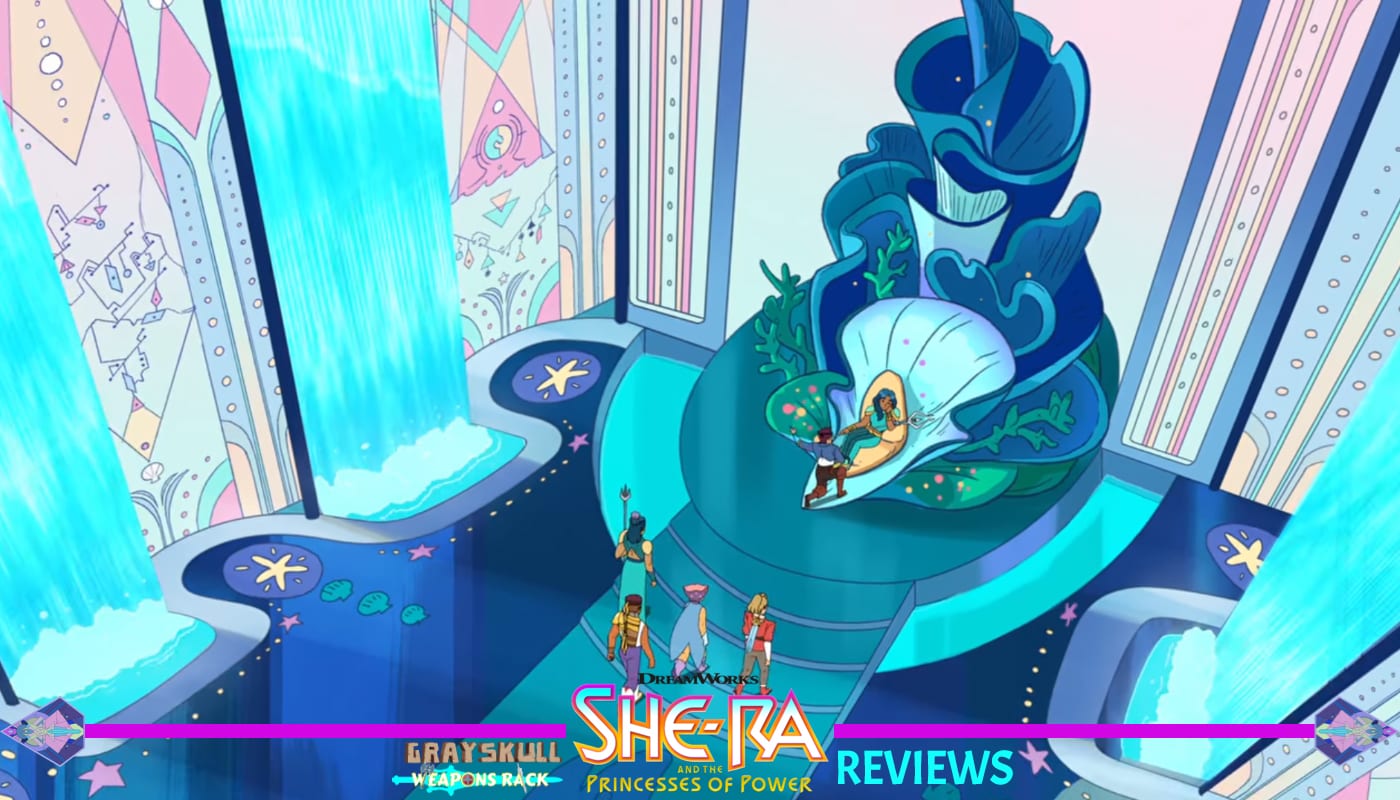 Finally arriving in Salineas, the trio and Sea Hawk discover that the kingdom is woefully not equipped and understaffed, placing the region in jeopardy of falling under Horde control. Having fled due to the Sea Gate that protects that land being is disarray and falling apart, the residents of the town fled, contributing to the desolate and feeling of the region. They finally meet Princess Mermista as Glimmer extends an olive branch to help Salineas if Mermista joins The Rebellion. We find out that the Sea Gate draws its power from the Runestone of Salineas called The Pearl and Adora deduces that the Runestone must be damaged, hypothesizing that this might be the cause of the failing gate. Mermista explains that the Salineas is crumbling as Glimmer offers to repair the gate if the gate is repaired.

Mermista as she appears in the Dreamworks Netflix series vs. 1980’s Filmation cartoon 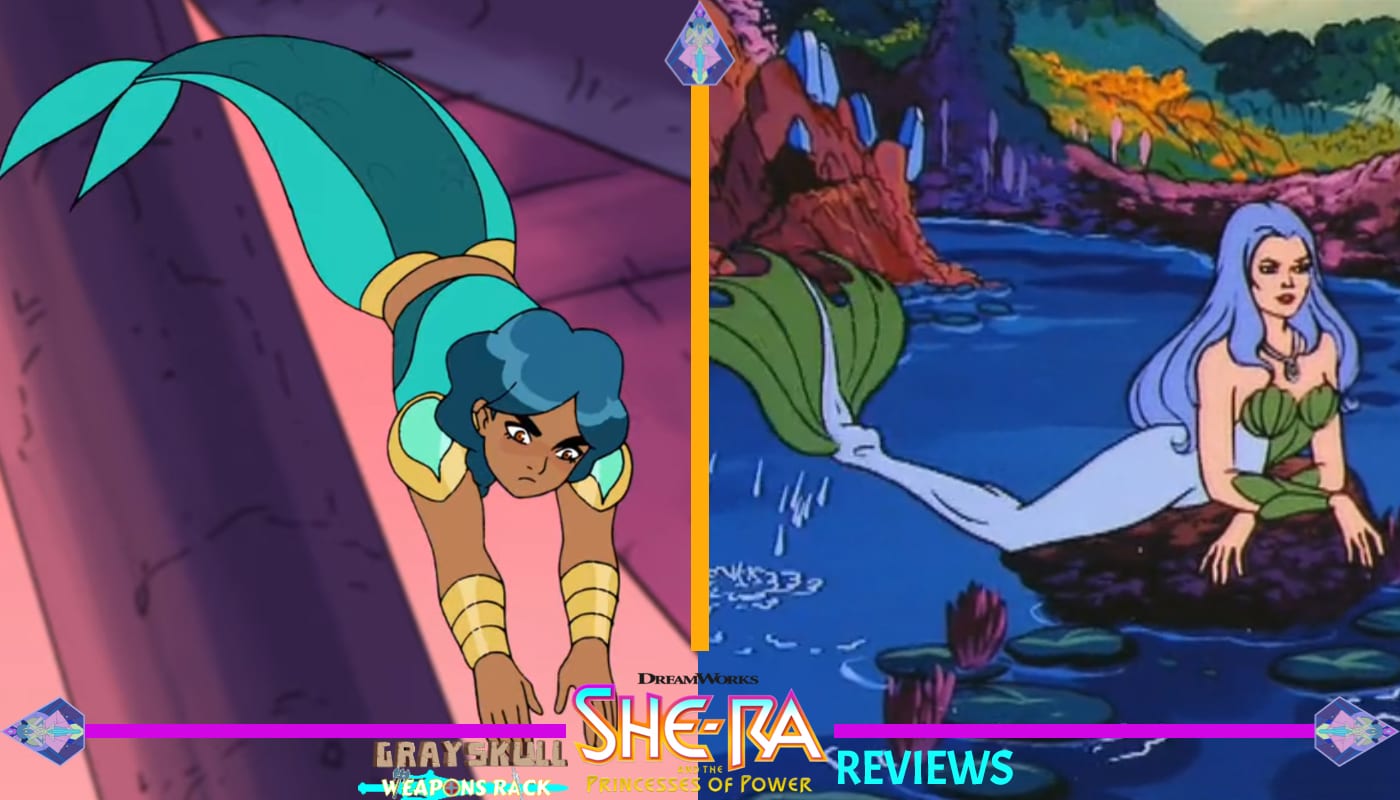 Mermista is one of my favorite characters in the series as she is full of sacarasm and is never afraid to speak her mind in quick jabs while keeping a calm, cool, and collected persona. Unwilling to express her true feelings, she is stoic and often is reluctant to verbally express how she is feeling. Keeping with her character from the 1980’s Filmation series, Mermista can transform into a mermaid and back to a human and possesses psionic control of water. 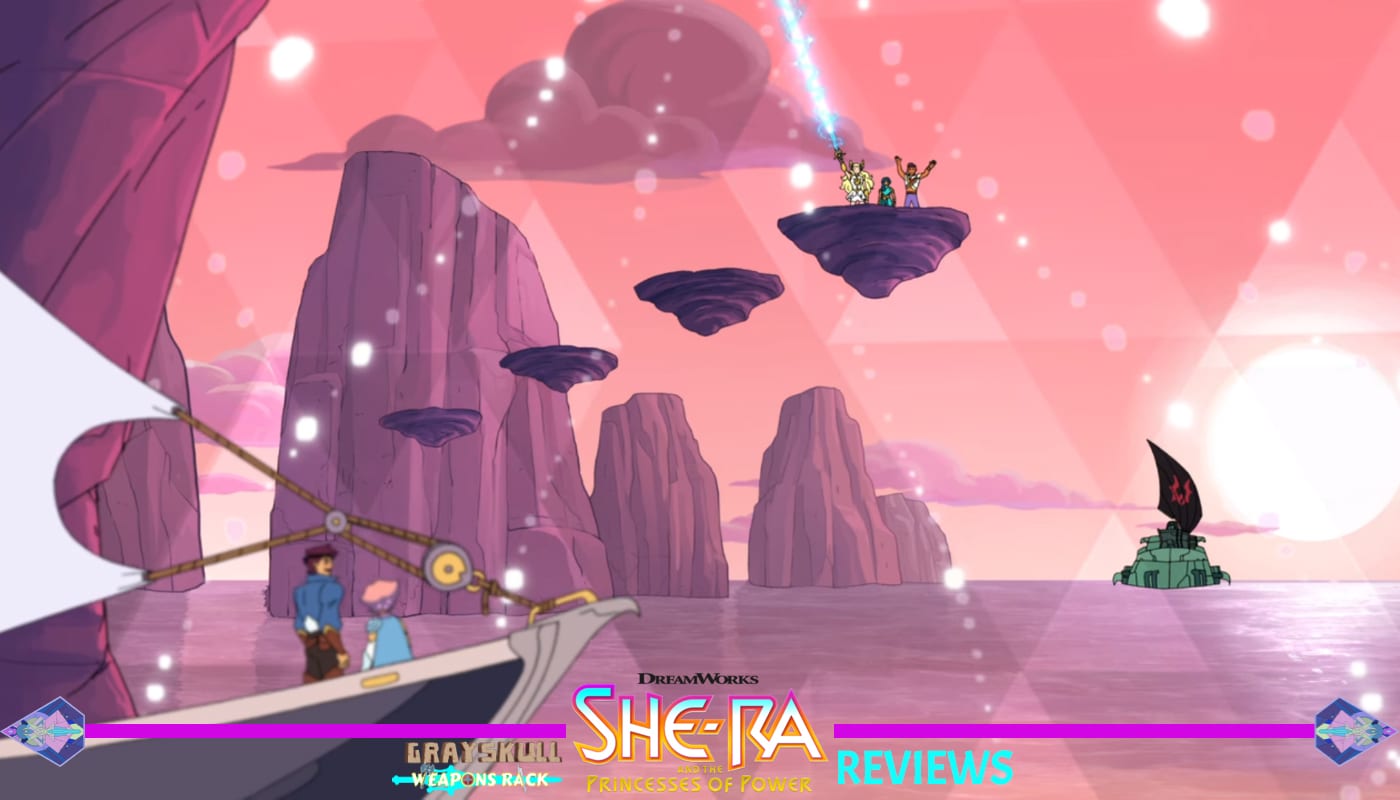 Agreeing to joing the Princess Alliance if the gate is fixed, Adora transforms into She-Ra and uses the Sword of Protections power to heal the gate. Mermista agrees to join the Alliance if Adora begins her work to repair the gate. Right in the middle of the healing of the gate of Salineas, Catra and her crew arrive on scene and begin to attack. Interrupting the healing process, Catra tries her hardest to convince She-Ra to return to the Horde as she makes fun of her claiming that Adora is just playing dress up. 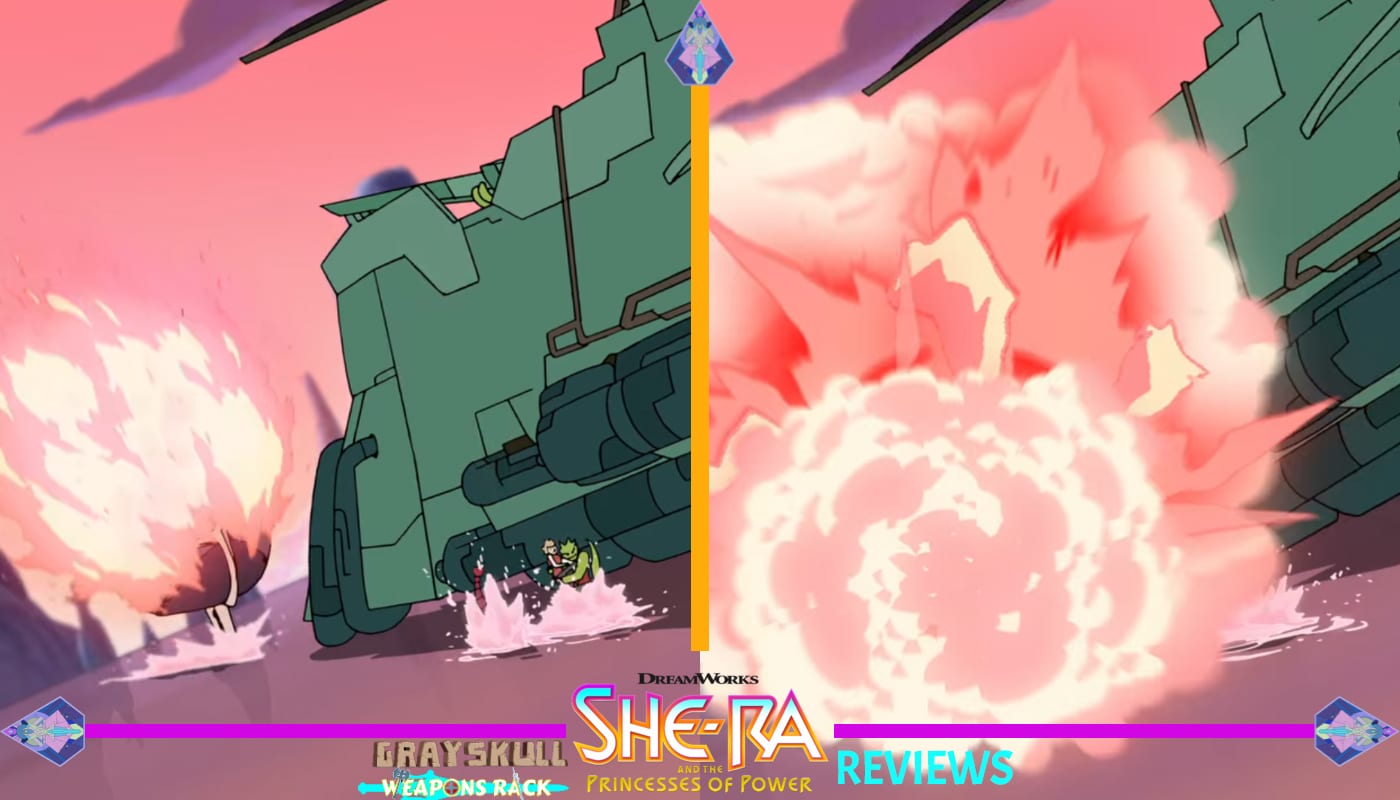 In one of Sea Hawk’s signature maneuvers, Glimmer convinces Sea Hawk to commence a fiery ship attack on the tremendously large Horde vessel while Mermista and Bow save She-Ra from Catra with a swift water attack, causing Scorpia and the to bail and retreat.

She-Ra heals the Gate of Salineas 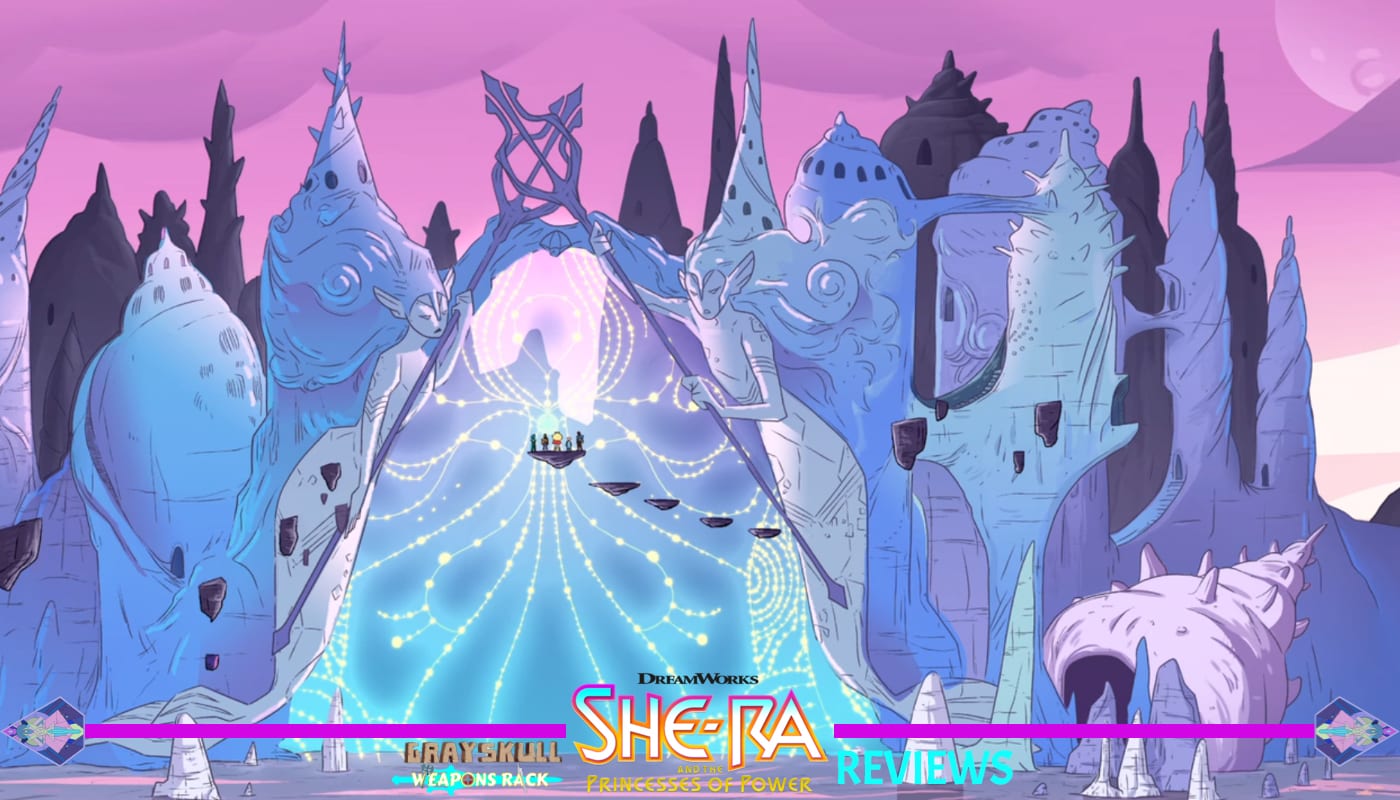 She-Ra completes the healing of the Sea-Gate to Mermista’s shagrin. Having sacrifided his own ship yet again, Mermista gives Sea Hawk a new ship. Mermista agrees to join the Princess Alliance, which is the perfect time for Sea Hawk (and Bow) to entertain the heroes with a magnificent sea shanty duet.

This episode did a great job introducing new, yet familiar, characters to the storyline while maintaining the strong developement in personas and personalities. Where the 1980’s Filmation series fell short on deep character developement and connection, the latest incarnation of the She-Ra and the Princess of Power series shines in that respect. Sea Hawk reminds me of a young Han Solo, a reckless scavenger who is out for one thing…himself and adventure! Having not been a fan of Scorpia’s character in the Filmation cartoon, I was pleased to see that Scorpia has a softer side, which is ironic given her large stature, pincer claws, and stinger tail. Doing a great job storytelling and building suspense leading up to the final face off between the Rebellion and Horde as the heroes maintain control over Salineas and heal the gate that guards the entrance.

You had one job… 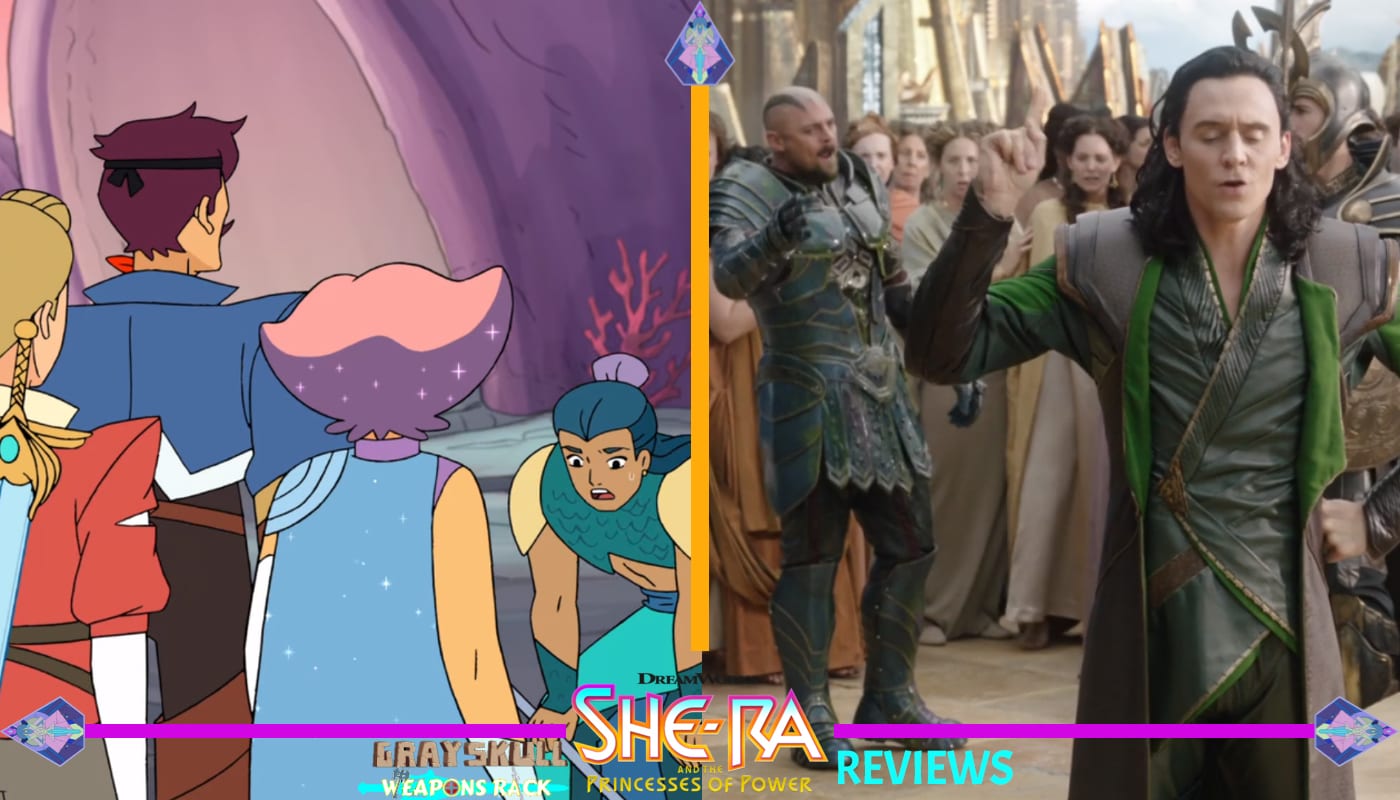 One of my favorite movies in the Marvel cinematic universe is Thor Ragnarok and the scene in this episode where the guard notices the arrival of the trio and Sea Hawk to Salineas reminds of one of my favorite scenes from the Thor Franchise where Skurge runs from the Bifrost to let everyone know of Thor’s return to Asgard. Out of breath and panting, Loki rebukes Skurge with a finger claiming that he only had one job.