The Sword Part 1: She-Ra and the Princess of Power Netflix Series Review 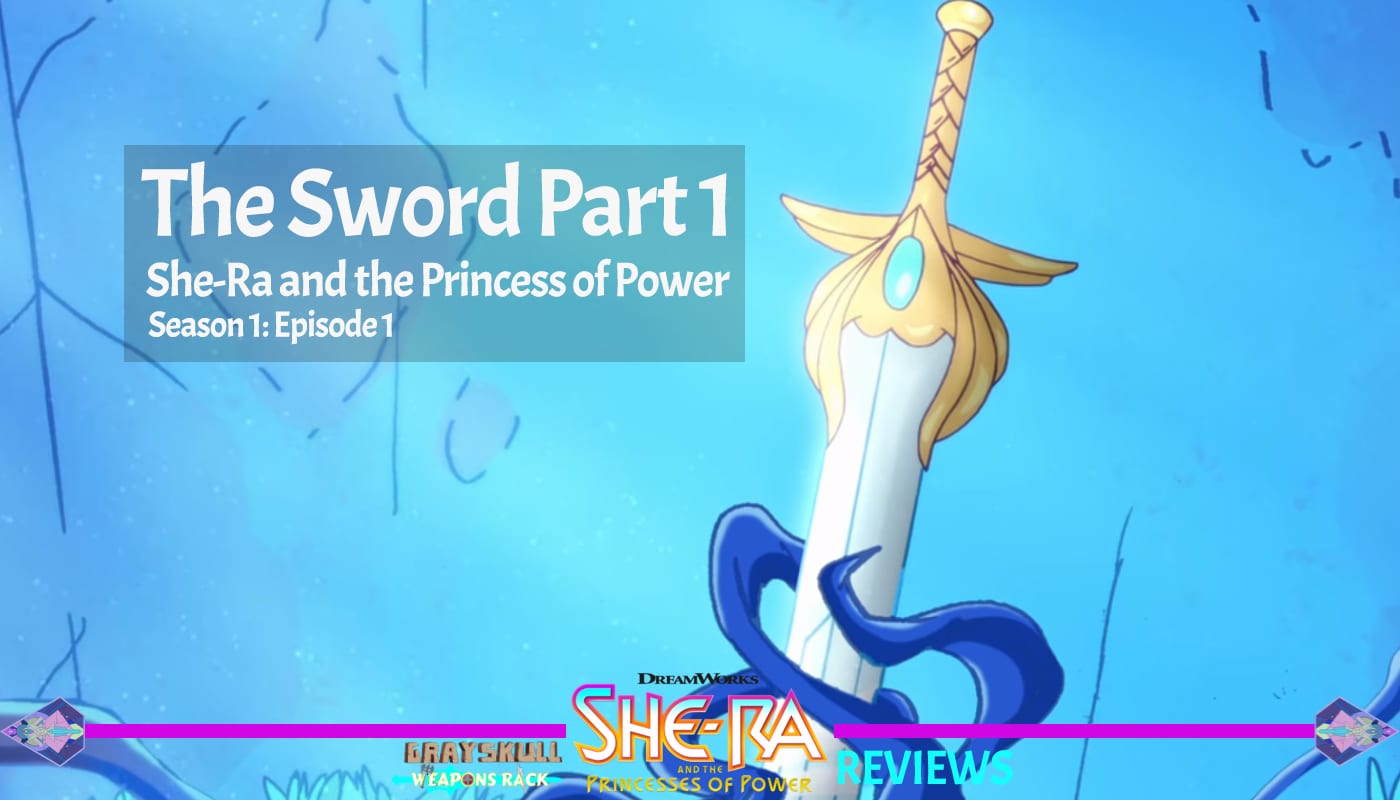 On the planet Etheria, the Horde rules. Only the Rebellion opposes them. Adora, a young soldier with the Horde, believes that they were the forces of order on the planet and that the Princesses in the Rebellion are evil. With her friend and fellow soldier Catra, Adora takes a joyride to the Whispering Woods where she catches sight of a mysterious sword. Entranced by the sword, Adora goes back in search of it, feeling like it is somehow meant for her. While searching for the sword, she encounters two members of the resistance, Princess Glimmer and Bow. Threatened by a giant creature, Adora discovers that the sword transforms her into She-Ra, the Princess of Power.

In the very first rebooted episode of She-Ra and the Princess of Power, we are reintroduced to characters we knew and loved the from the 80’s but with an entirely different look and feel. In all honesty, I was unsure about how the edgy character design and quick witted members of The Great Rebellion and The Evil Horde would translate but I am full in 1000% to the story lines, animation, and character development. Speaking of which, we are introduced to several characters in the first episode which bare some to no resemblance to the 1980’s Filmation cartoon and I love the direction. Let’s meet some of them!

Adora as she appears in the Dreamworks Netflix series vs. 1980’s Filmation cartoon 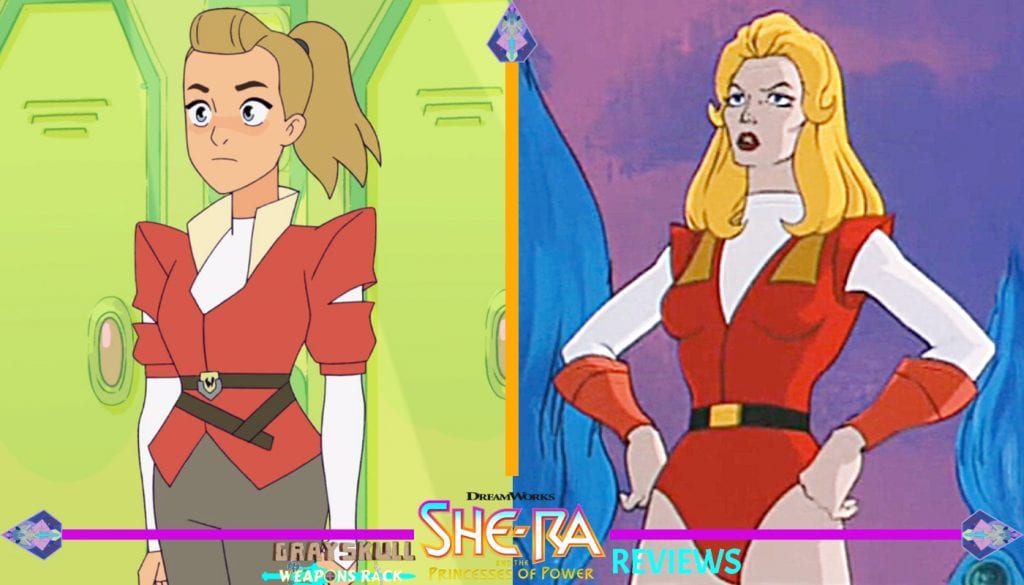 Aside from the night and day versions of how the character is rendered in today’s animation styles, Adora is a much younger women than was portrayed in the 1980’s Filmation cartoon. The red uniform with the white shirt is still retained but is definitely a lot more stylish with harsher angles. Ditching the blonde (or yellow) hair for brown, the Dreamworks version of Adora does not let her down and keeps in a pony tail until she transforms into She-Ra. The beginning of the story line remains true to the Filmation cartoon only in the sense that Adora is a soldier and member of the Horde who is trying to take down The Great Rebellion. The new Netflix series introduces a brand new canon to the Princess of Power where secrecy is no more and she freely transforms into She-Ra in front of anyone and everyone. In the first minutes of the episode, she is seen with Catra, a Horde soldier like herself, who seem to share a unique bond with one another.

Catra as she appears in the Dreamworks Netflix series vs. 1980’s Filmation cartoon

Catra’s appears as an actual feline species as opposed to a woman dressed up like a cat with an annoying voice in the Filmation cartoon. Her colors are brown in tone and her eyes are unique with the right eye being a nice teal blue and the left eye a sunny yellow. She has brown hair, tiger markings on her arms, and razor sharp nails. The first episode reveals that Catra and Adora were both raised by Shadow Weaver and when Adora was having conflicting feelings about leaving the Horde to join The Great Rebellion, Catra tried to bring Adora back to the Fright Zone convinced that she was just confused and going through a ‘phase’. During an excursion to the Whispering Woods, Adora and Catra nearly crash into a tree, causing She-Ra to discover the Sword of Protection, but it appears that this might be a premination. Catra and Adora return back to the Fright Zone but Adora ventures out again, which ultimately leads her back to the Whispering Woods where she runs into Glimmer and Bow.

Glimmer as she appears in the Dreamworks Netflix series vs. 1980’s Filmation cartoon 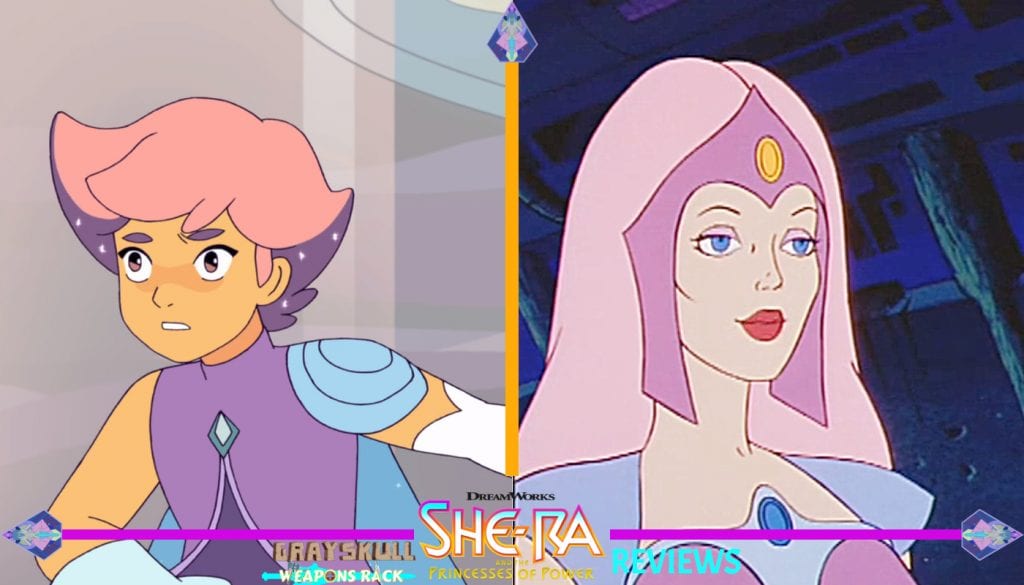 Glimmer loses the long hair and gets a darker skin tone for the new animated series but still retains her purple and pale blue color scheme. She is a short and stocky girl, sporting a messy chopped bob hairstyle that shifts from pastel pink to a sparkling purple underneath. She has thick, bushy hair, and bangs that curl up, which she wears parted down the left. During this episode, she discovers Adora when Bow and her follow a bright light and signal they are tracking, which lead to a scuffle between the current leader of The Great Rebellion and The Evil Horde as they grapple for the newly found Sword of Protection.

Bow as he appears in the Dreamworks Netflix series vs. 1980’s Filmation cartoon 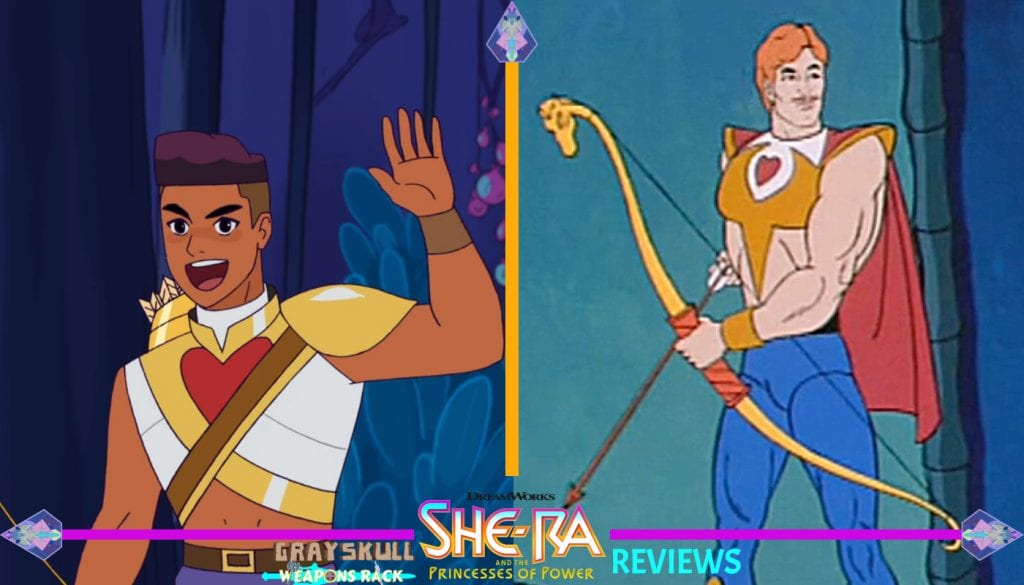 Bow is still an archer but now is a technology master in The Rebellion. He has a darker complexion, a buzz hairstyle, and black eyes. His chest armor is embellished with a red heart, which is a nod to the 1980’s Filmation cartoon appearance. On his left arm, he wears a golden  metal sleeve on his shoulder and a golden forearm guard. His quiver of arrows is attached to his back, which is both brown and gold. He wears blue jeans, with a brown belt, and matching golden buckle. Bow has shown himself to be a very friendly, cheerful, optimistic, and intellectual person and serves as the voice of reason among his friends. He constantly warns them of consequences and is the first to give Adora a chance to join The Rebellion, indicating a very trusting nature.  In this episode, he leads Glimmer to a bright light using a Track Pad where they run into Adora who has gone back to the woods to retrieve the Sword of Protection, ultimately transforming her into She-Ra. 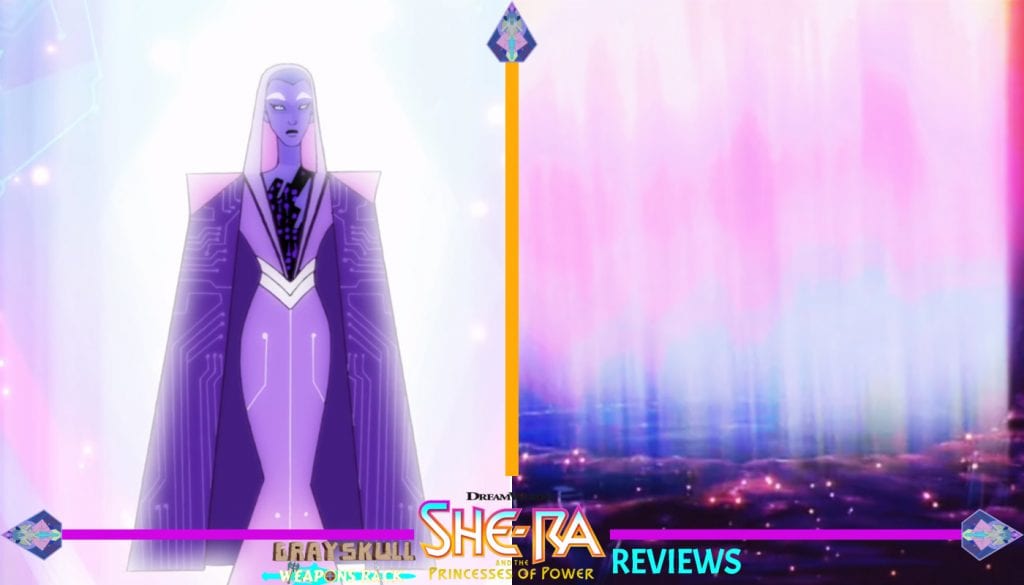 The most notable difference between the Dreamworks version of Light Hope and the 1980’s Filmation version is the change in gender and, instead of literally being a blinding light, the character gets a body. In the Dreamworks series, Light Hope is a holographic persona and was programmed to train and assist She-Ra, Etheria’s champion. In truth, Light Hope was reprogrammed by the First Ones, with the goal of activating the Heart of Etheria weapon at any cost. In order to do this, she used all of her power to reach across the universe and bring Adora to Etheria. 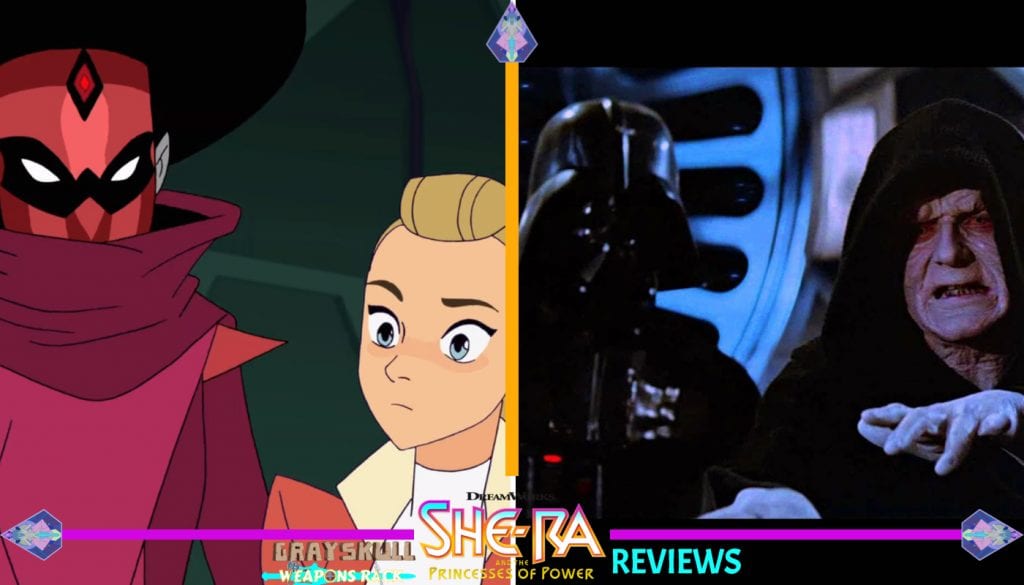 The scene where Shadow Weaver tells Adora that she’s a prime candidate for Force Captain and that Lord Hordak has elected her to lead a squadron into Thaymor reminds me of a master and apprentice relationship we see in Star Wars and other movies. The similarities lie within Adora where she was good person at the core but lied to by the Horde to think that the Princesses of Etheria were destructive, vengeful, and power hungry. Similarly, Darth Vader (aka Anikin Skywalker) was deceived by Darth Sidious in believing that the Jedi were evil and wanted to take over and rule the galaxy. Both realized the err in their ways although, in Darth Vader’s case, it was too late for him as he met his demise while he turned on Darth Sidious. The relationship between Adora and Shadow Weaver remains to be seen but, for now, Adora is conflicted about her allegiance to the Horde as she knows more information about The Rebellion.

The Fright Zone and Skynet from the Terminator Franchise

The Fright Zone has always reminded of Skynet headquarters from the Terminator movie franchise. Both places are an industrial wasteland and world domination emanates from its core. While Hordak and Entrapta are responsible for creating the machines to take over Etheria, Skynet has a similar purpose although the machines are created by machines. The advances in technology between the Horde and Skynet serve the ultimate purpose of wiping out the one person that is responsible for their downfall. She-Ra (Adora) and John Conner are the lucky ones in this case. 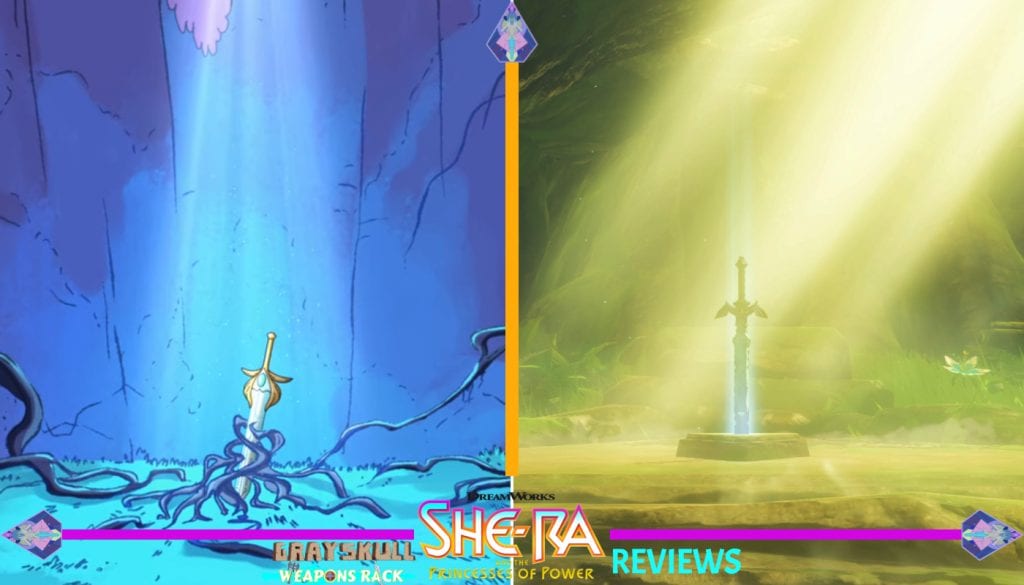 In this episode, Adora comes across the Sword of Protection in the woods after she falls from a Skiff to avoid crashing into a tree that Catra nearly steers them into. Noticing the a sword is covered in vines she reaches out and touches the pommel and, upon touching it, a brilliant light erupts from the sword where her hand and sword meet. She hears a female voice that says “Balance must be restored, Etheria must seek a hero,” A baby cries, a voice calls “Adora,” Then the voice disappears, replaced with Catra’s where she tells Adora that the skiff was driven into a tree. Similarly, Link from the Legend of Zelda cannot complete his quests without the Master Sword. In the Legend of Zelda Canon, The Master Sword is a recurring sword in the Legend of Zelda series. It is imbued with the power to vanquish evil. In many games, it is said to be the only sword capable of defeating the malevolent Ganon (Ganondorf, depending on the game) when he has the Triforce of Power. Like the Sword of Protection, the Master Sword has become one of the most iconic symbols of the Legend of Zelda series.

I see many tie ins and similarities with the First Ones and their ancient technology and the technology found in the Legend of Zelda Breath of the Wild and Skyward Sword canons. In this episode, after Adora touches the Sword of Protection, she appears in a different dimension, a world of technology and crystal. She is greeted by a woman by the name of Light Hope and that she has been waiting a long time for her to make a connection with the Sword of Protection.  Light Hope tells her that the Sword is meant for her, that Etheria has need of her, and she asks her if she will answer it’s call, asking “Will you fight for the honor of Grayskull.”  With respect to the Legend of Zelda Breath of the Wild Canon, 10,000 years ago, the land of Hyrule had become very technologically advanced. The Hylians crafted technological marvels to ensure the kingdom’s safety if Ganon was ever to return. Among these technical marvels was a legion of autonomous Guardians and four Divine Beasts. The Divine Beasts were piloted by four individuals of exceptional skill from across Hyrule, known as Champions.

As the Episode continues, Adora, Glimmer, and Bow come across a bug monster in the woods and although the bug monster is not tech powered by the ancient ones, it looks like it could have been an experiment through evolution where biology and technology have combined in several unintended places. As the monster attacks and reaches Adora, she lifts the Sword of Protection over her head just in time to block his spiky claw. Upon impact, the sword lights up with power as she hears Light Hope’s voice who asks her if she will fight for the Honor of Grayskull. Struggling to keep the monster from killing her, Adora shouts “For the honor of Grayskull,” transforming her into She-ra, a girl with long flowing blonde hair, bright blue eyes, a golden crown of wings and a dress of white and gold.

Adora’s final transformation into She-Ra the Princess of Power 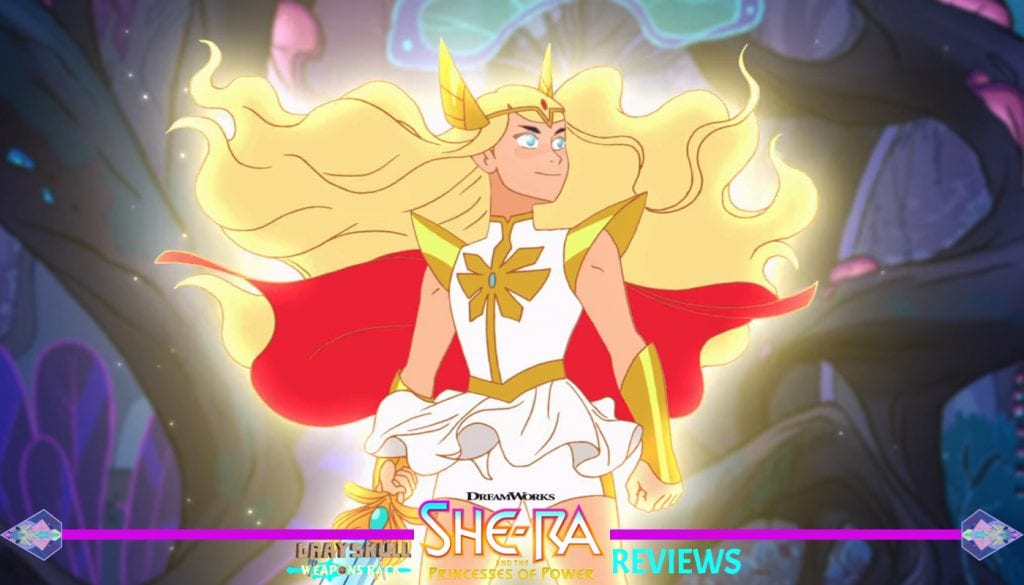