The Sword Part 2: She-Ra and the Princess of Power Netflix Series Review 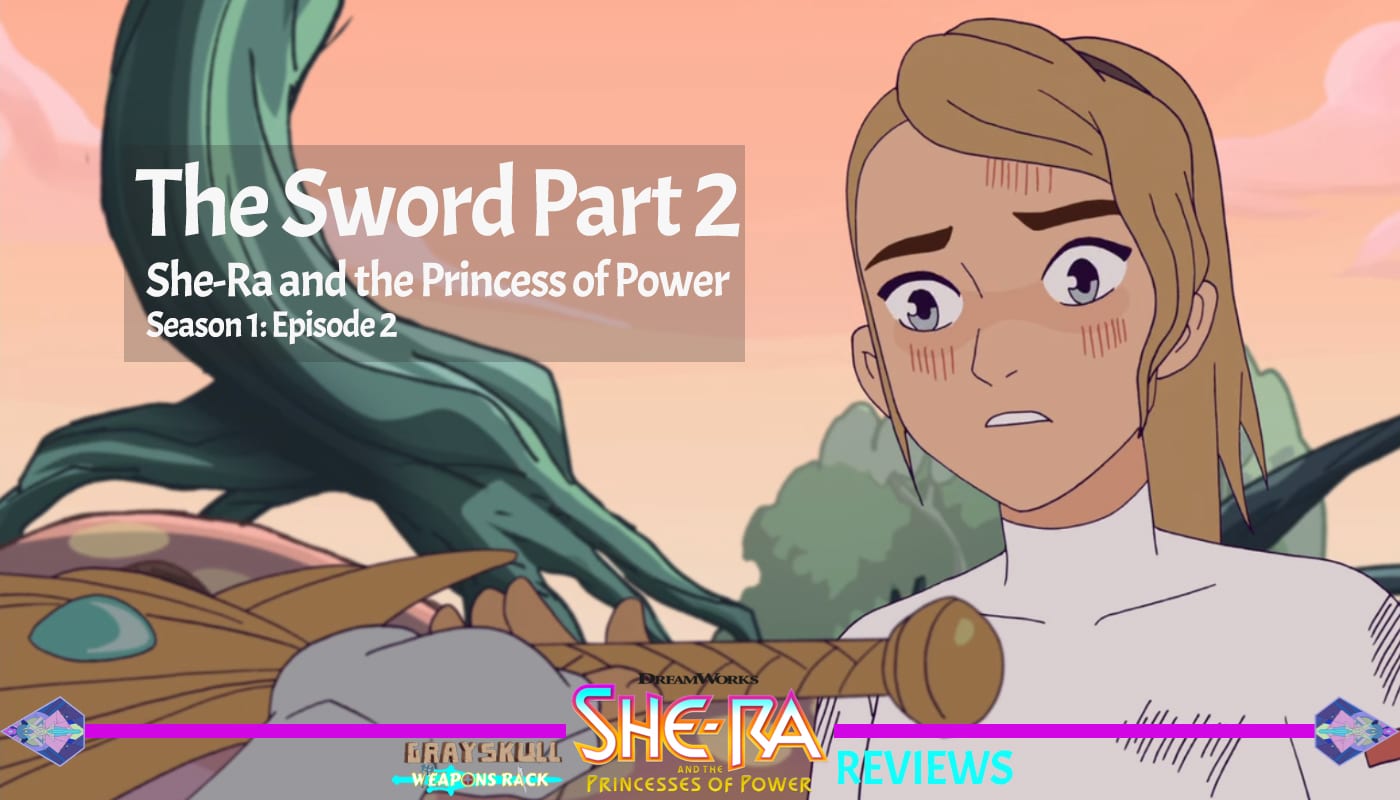 She-Ra transforms back into Adora

Continuing where The Sword Part 1 left off, Adora, now as She-Ra, comes face to face with the bug monster. She-Ra then looks at herself, and sees that she is no longer Adora, She-Ra falls and transforms back into Adora. The monster gives chase again and Bow pleads with Adora to transform into She-Ra again but Adora does not know how yet. After the bug monsters falls down a gorge, Adora, Bow, and Glimmer arrive at the door to the First One’s ruin.

Adora, Bow, and Glimmer arrive at the First One’s ruin

Having not ditched the bug monster totally, unbenounced to them,  they are interrupted by the roaring monster again as they try and decipher the script on the door. Bow screams “What does it say?” and Adora says “Eternia,” and the door scripture lights up and the door opens as they run inside before the monster gets to them. They enter the ruin but Bow and Glimmer are confused as to how Adora could have read the word on the door but Adora has been able to read the First One’s language all of her life.

Adora, Bow, and Glimmer discover a First One’s pedestal that looks like She-Ra 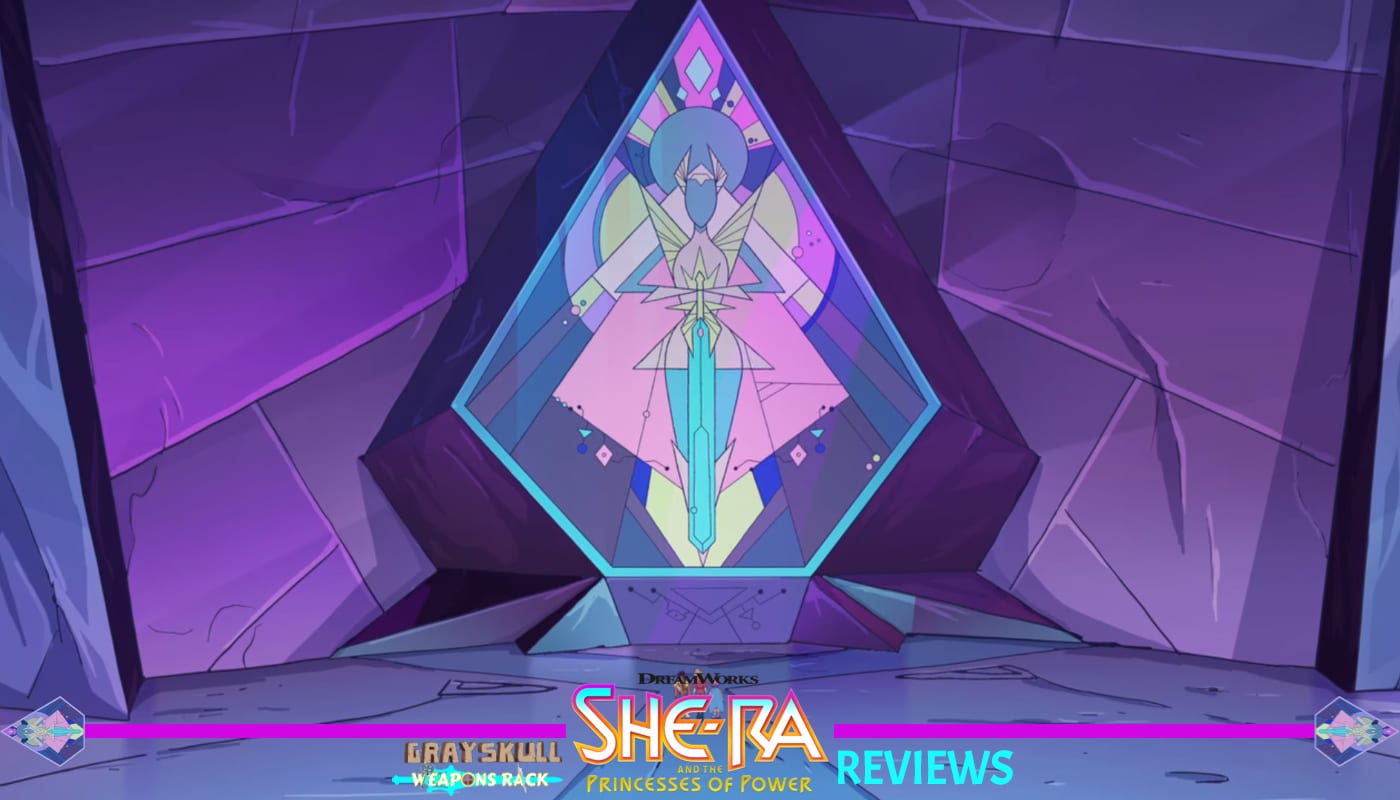 As they make their way deeper into the ruin, Bow explains that the First Ones were the original settlers of Etheria and that they disappeared a thousand years ago but left a lot of technology and ancient ruins. Not knowing what happened to the First One’s, Adora asks what inquires but and Bow does not know and says they just disappeared. As they discuss further, Adora admits she knows nothing about the First Ones and that The Horde several things they did not tell her. As they continue on, they come across a pedestal of a picture that looks like She-Ra. Bow asks if she can read the inscription on the image and she says with determined focus “She-Ra,” which then causes the pedestal to shine and illuminate the rest of the ruin. 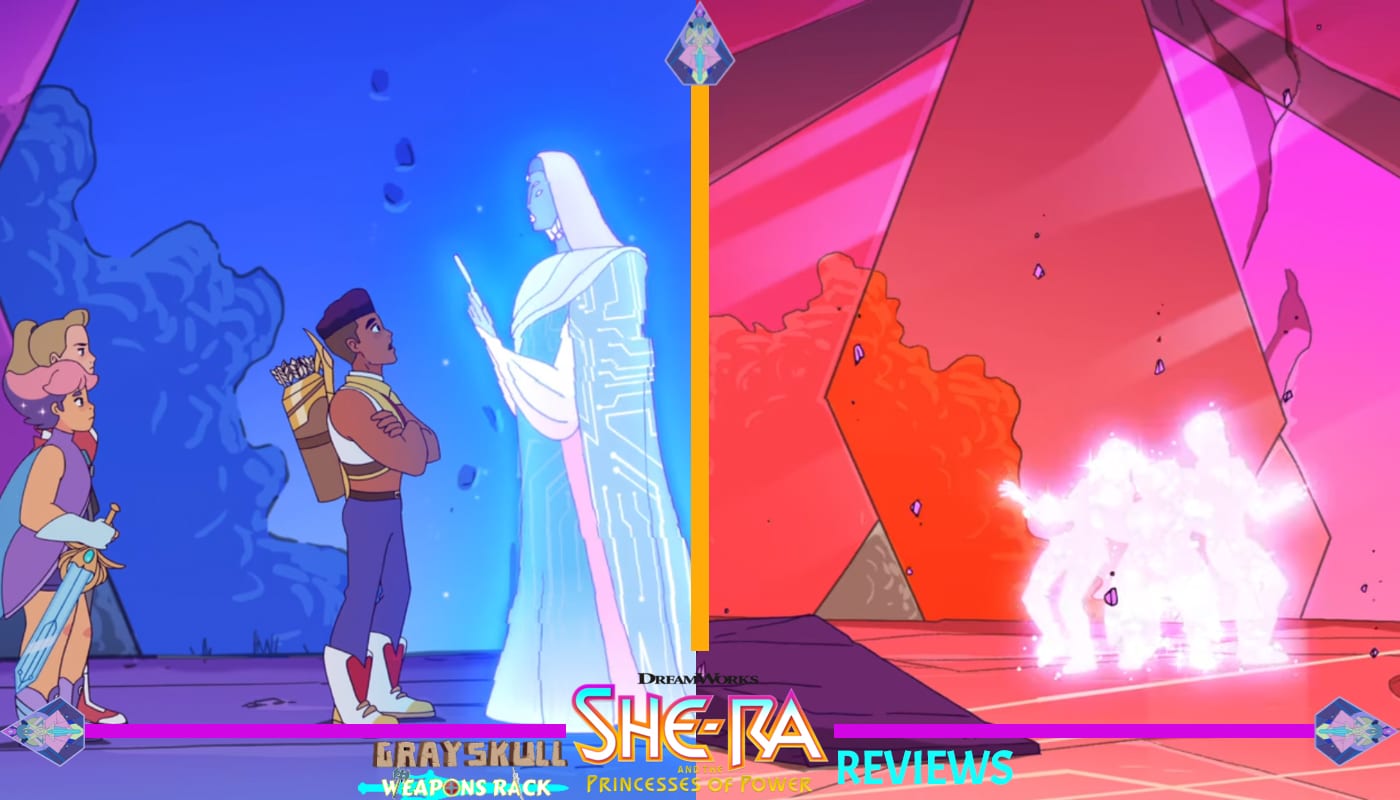 A hologram then appears in the front of them and says “Greetings, administrator…what is your query.” After much confusion between Bow, Glimmer and Adora, the hologram says “Administrator not detected” and “Lockdown initiated,” causing the ceiling starts to crumble. Not knowing how to stop the impending doom, Adora wants to transform into She-Ra but Glimmer does not let her. In a snap decision, Glimmer teleports everyone out of the ruin right before part of the ceiling will fall on them, killing them instantly. Outside of the ruin, after taking a nasty fall that is broken by one of Bow’s arrow nets, Glimmer asks Adora why she didn’t run away and go back to the Fright Zone, Adora answers, “If I go back I’ll never find out who I am or where I came from.” Bow extends a hand of friendship but Glimmer makes it clear she does not trust Adora.

Shadow Weaver as she appears in the Dreamworks Netflix series vs. 1980’s Filmation cartoon

Technically introduced in The Sword Part 1, Shadow Weaver grills Catra about the whereabouts of Adora and reveals that she has tracked Adora down, without Catra’s help. Shadow Weaver tells Catra to go find Adora and when Catra refuses Shadow Weaver uses her magic to paralyze her. Now is a good a time as ever for a character spotlight. This version of Shadow Weaver keeps her face concealed behind her red mask and has long and flowing black hair that flows after her like a sinister shadow. She is cloaked in a dress colored red and dark maroon with pink details, which has a sleeve on her right arm but not on her left. What is missing is her traditional horde symbol belt from the 1980’s but there appears to be less Horde branding in the latest reboot of She-Ra. Back to the story…

In Thaymor, Adora realizes she has been missing out… 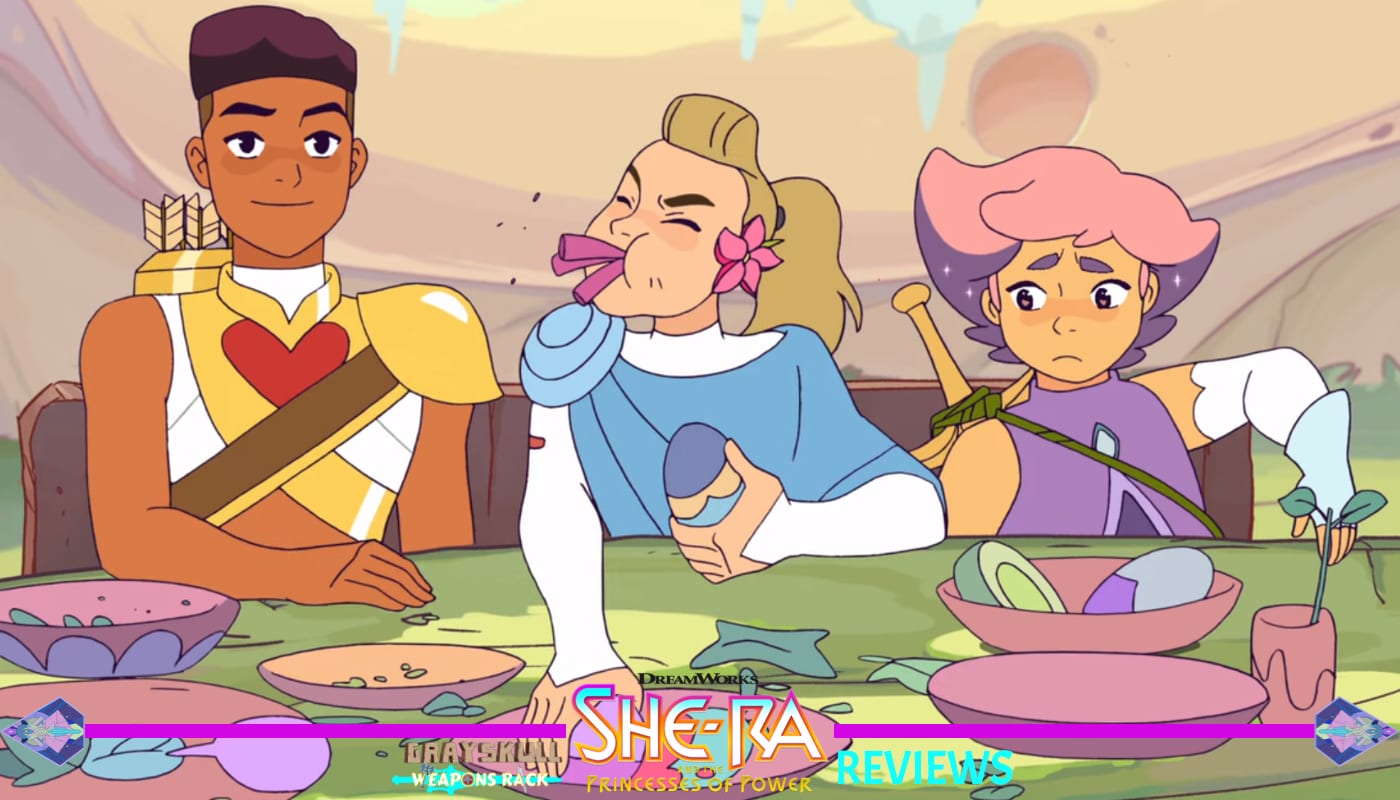 They end up in an area called Thaymor where Adora is introduced to a life she knows nothing about and is mesmerized by the party atmosphere, fun, games, storytelling and food. And when Adora sees a horse for the first time, uttering the line “What. Is. THAT?” she gets weak in the knees but Bow introduces them and Adora says, “This is the best day of my life” as she stuffs her face full of tasty treats.

Adora confronts a Horde Tank that is piloted by Catra 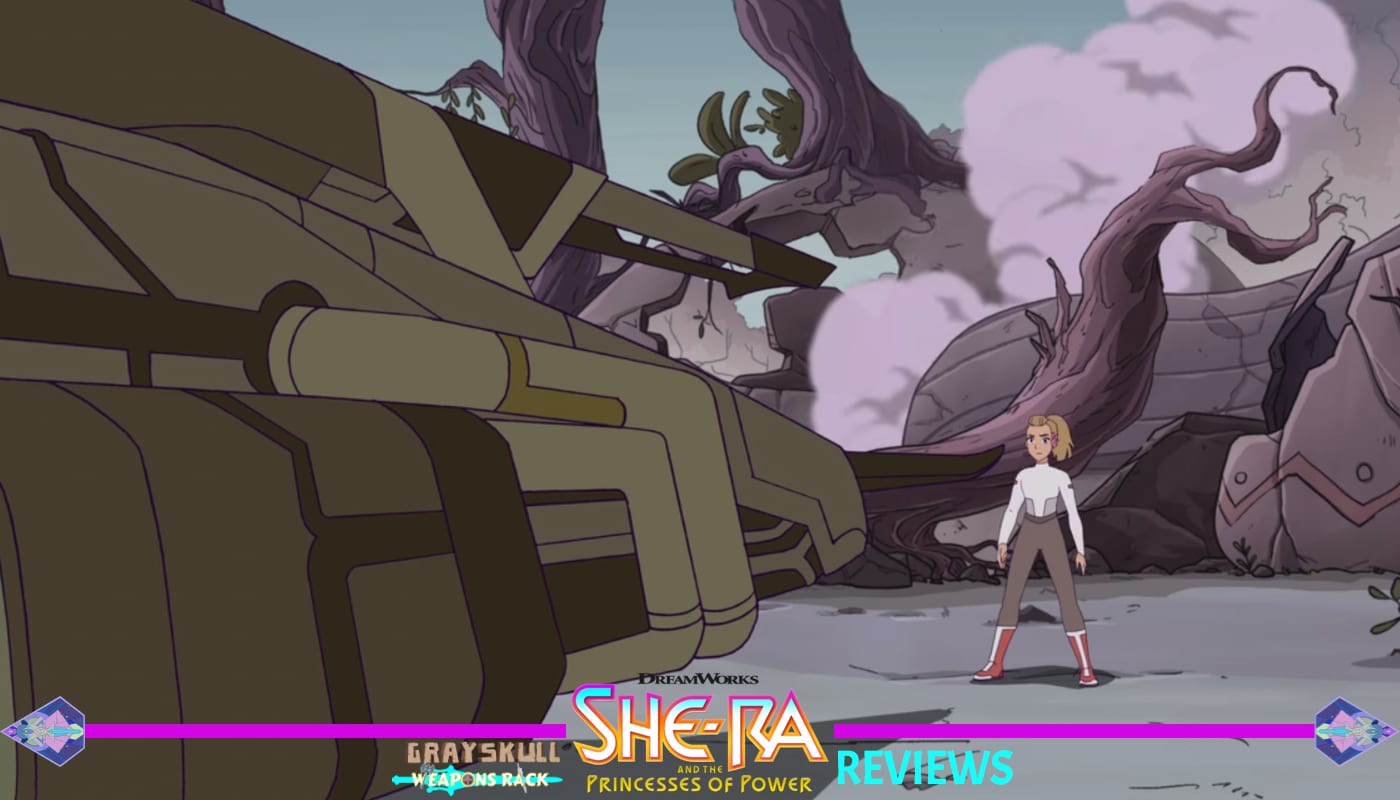 Interrupting the festivities, the Horde tanks overrun Thaymor sending the citizens fleeing but Adora reveals she’s been ignorant of the Horde’s evil plans. Adora confonts one of the tanks and Catra and Adora quarrel about the attack while Glimmer and Bow fight the Horde soldiers. Catra pleads with Adora to come back to the Fright Zone as Catra reveals to Adora that they’ve both been manipulated by Shadow Weaver and Hordak. In an act of solidarity, Adora instantly defects from the Horde and starts to defend the village but Catra stuns her with her weapon, leaving her lifeless on the ground.

The Horde moves in on Bow, Glimmer, and Adora and it looks like Bow is facing his last days on Eternia but it is Glimmer who finally gives Adora the Sword of protection. She then shouts, “For the honor of GRAYSKULL!” and transforms into She-Ra. As Bow and the horse are surrounded by Horde soldiers and tanks he is resigned to fight to the death but She-Ra enters walks in and and makes quick work of the horde with one electrically charged sword strike to the ground. The remaining members of the Horde retreat as Adora watches on as Catra leaves to head back to the Fright Zone.

Doors can be described as a piece that separates one room from another or outside and in but when we think of momumental doors that appear in some movies (or in this case, cartoons), the door takes on a whole new meaning and is sometimes plays a pivotal role in a scene. For example, when Adora, Bow, and Glimmer arrive at the First One’s Ruin, they are confronted with a challenge they must pass to gain entrance to the ruin. In this case, Adora knows how to read the language of the First One’s, to the shock of Bow and Glimmer, and reads the script out loud as she utters the word ‘Eternia.’ Simarly, in the Lord of the Rings: The Two Towers movie, Gandalf and company are faced with a similar challenge but theirs comes in the form of a riddle, which reads, “speak, friend, and enter.” They are all stumped for a while (in movie time) but the answer suddenly comes to Gandalf that the answer is in the form of a password in the Elvish language, The answer was a password in an Elvish language. Gandalf eventually solved the riddle, remembering the Elven word for friend, Mellon, causing the doors to swing open and granting them passage to the Mines of Moria.

“These aren’t the droids you are looking for…” 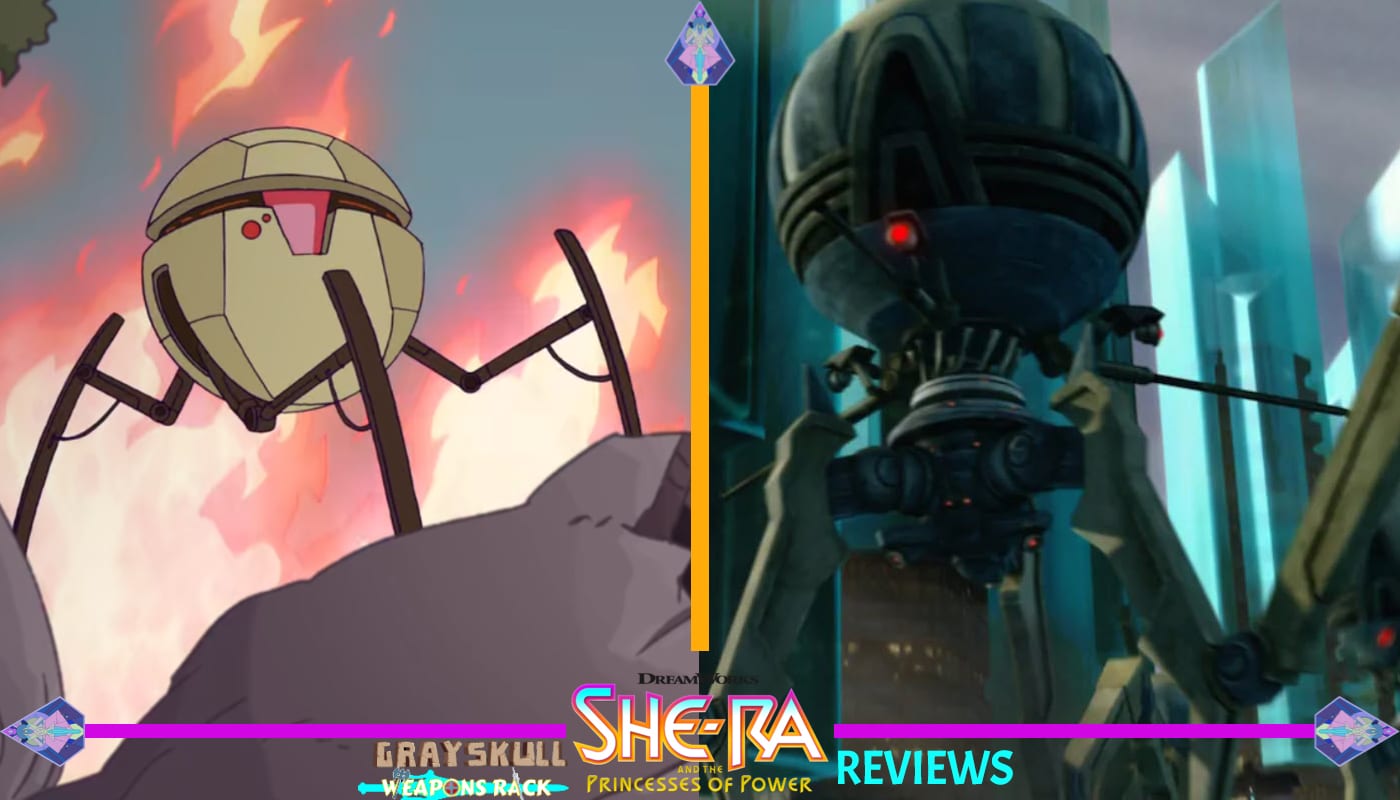 Ever since seeing the Horde Droids introduced in The Sword Part 1, the immediately reminded me of the Octuparra Droids from Star Wars. I was first introduced to the Octuparra Droids in the 2005 film Star Wars: Episode III Revenge of the Sith movie where several variants of the this type of droid were visible in movie. As far as the Horde Droid goes, the design is straightforward and simple but it seems like these types of droids are replacing the Horde Soldiers from the original 1980’s Filmation cartoon. One thing that these two droids share in common is they are programmed to destroy anything that gets in their way.

“They met someone they did not expect…does that comfort you?”

One of my favorite scenes from the Lord of the Rings: The Two Tower where Gimli, Aragorn, and Legolas are confonted by a wizard they believe to be Saruman but they are unsure as the figure is shrouded in a bright, blinding white light. As the light dipersers and the figure is shown to be Gandalf, who has returned from the dead to aid the trio in their quest to find Frodo. In this episode, She-Ra has a similar effect as she strolls out onto the battle field where Bow is about to meet his certain doom. As She-Ra walks out, she is too shrouded in a white, blinding light and as she plants her sword in the ground, a ripple of energy flows through the Horde leaving a wake of destruction in her path.