Over the years, the women in the WWE have gone from a revolution to an evolution. We have the women’s Royal Rumble, Money in the Bank Ladder Match, and for the first time ever, Becky Lynch, Charlotte Flair and Rowdy Rhonda Rousey main evented WrestleMania 35 where we saw Lynch become two belts Becky where she won both the Smackdown and Raw woman’s championship 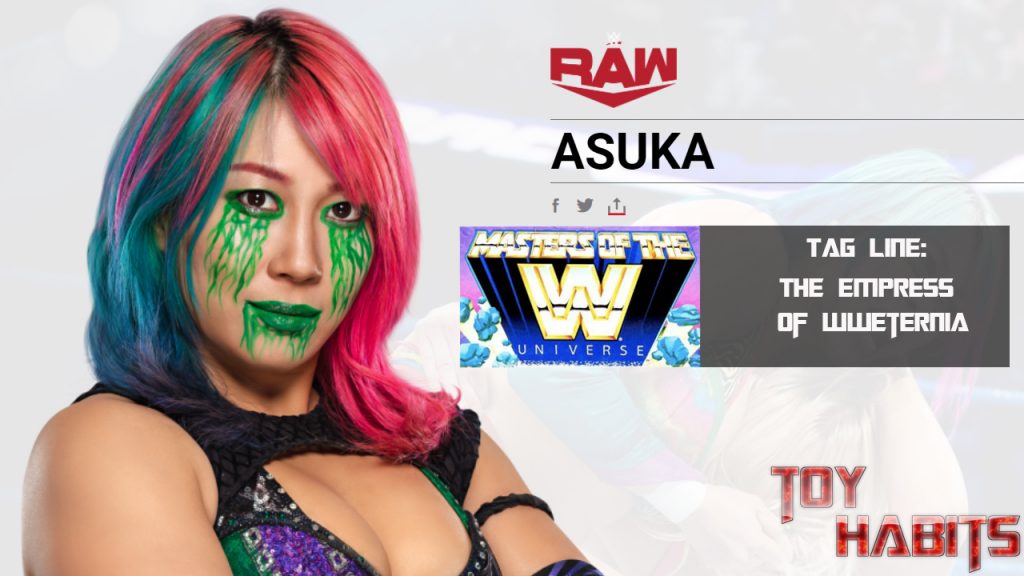 Tagline: The Empress of WWEternia

Asuka marches to the ring in a traditional noh mask and kaleidoscopic battle gear and looking every bit the victor before the opening bell even rings. Asuka has used her perfect technique and wicked intentions to take down everybody. I think Asuka would make an amazing figure with the tagline…the empress of WWEternia and her look would make a killer figure. As far as concept, they could really do a lot with Asuka as she has a removable mask and her ring attire could make for cool accessories. Given she sometimes spits green mist, there could be a tie in with Snake faction, bringing some variety to the line 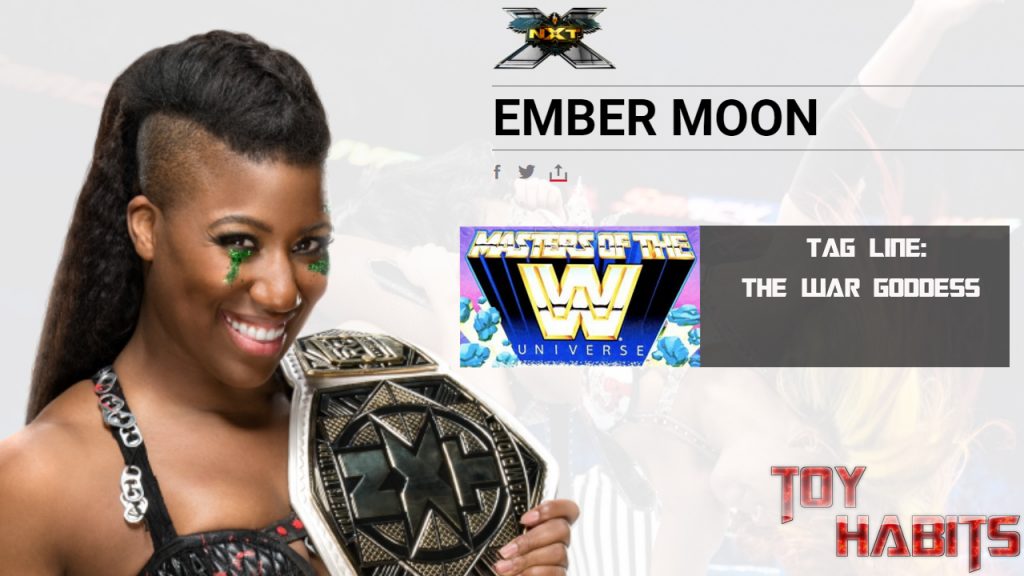 Ember Moon’s rapid ascension up the ranks of WWE is owed to the three attributes that she says define her best: Skill, honor and heart. She has exemplified each of those since taking WWE by storm and finishing move is a high risk move called the Eclipse and she would make an excellent warrior in the Billion Dollar Skull Queen’s Army with the Tag line The War Goddess. A concept for this figure could include her removable trench coat and her skull mask, which would go perfectly with Stephanie McMahon’s look 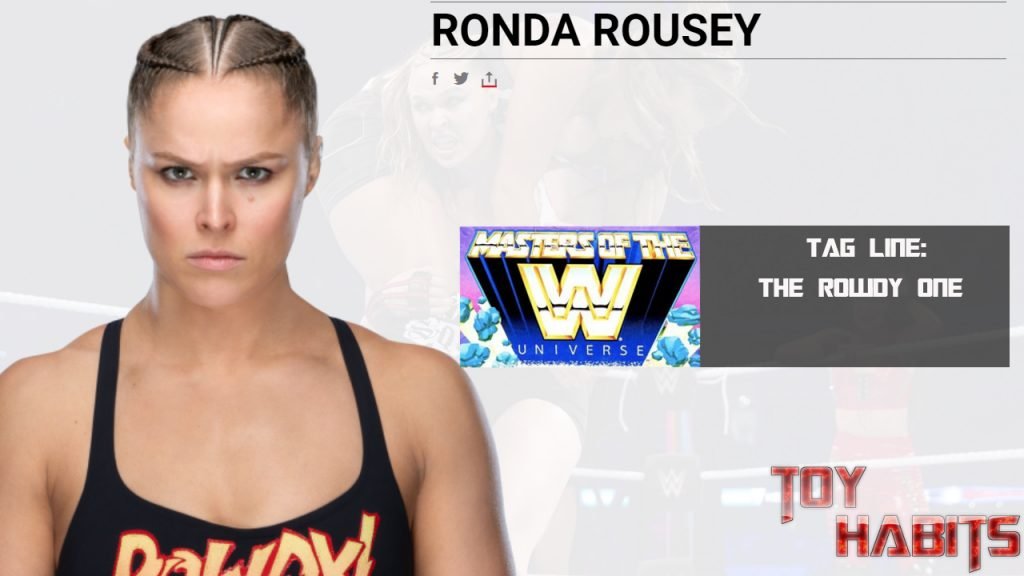 Tagline: The Rowdy One

3rd on my list is Rowdy Rhonda Rousy. She embarked on a ruthless undefeated streak that saw her submit opponents within a matter of seconds via her signature armbar. As a nod to the late great Rowdy Roddy Piper, Rousy would make a killer figure and would pair nicely with the Roddy Piper figure that is already in the line. I think her tagline could be summed very simply with The Rowdy One. A concept for her figure could include her Rowdy shirt as well as alternate head sculpts and ring attire. I could see this as the first deluxe figure in the line as she had a Jekyll and Hyde personality that lends her head sculpt to alternate facial expressions. 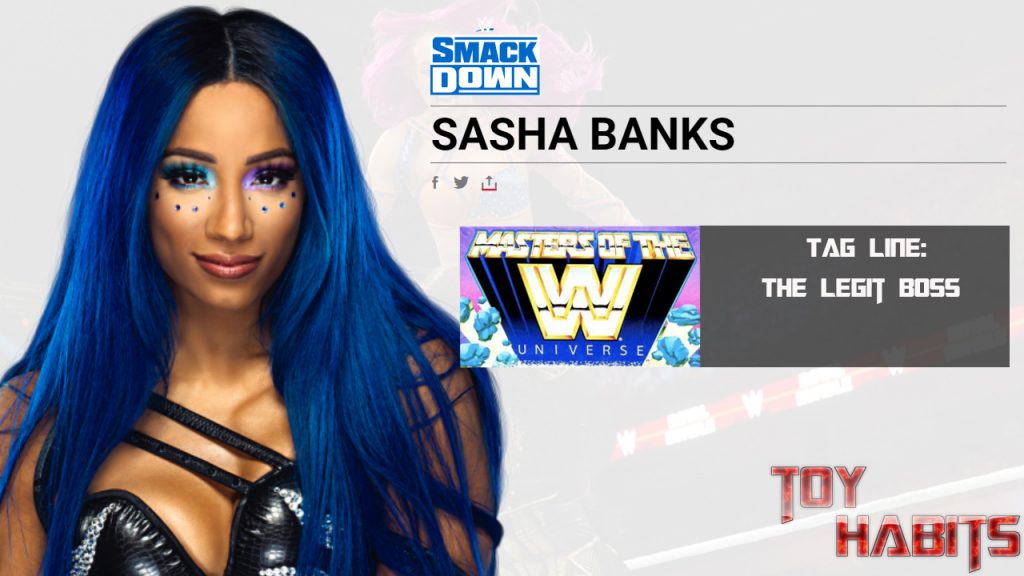 4th on my list is Sasha Banks. I feel like she could be a great addition to the line as she could be the right hand woman to the Billion Dollar Skull Queen Stephanie McMahon and her Legit Boss knuckles would be make a great accessory…like the Word Life knuckle bling on Faker John Cena. Being that she is the boss, her tagline has to be The Legit Boss. A concept for her figure could include various ring attire, different colored hair, and her legit boss knuckle bling. 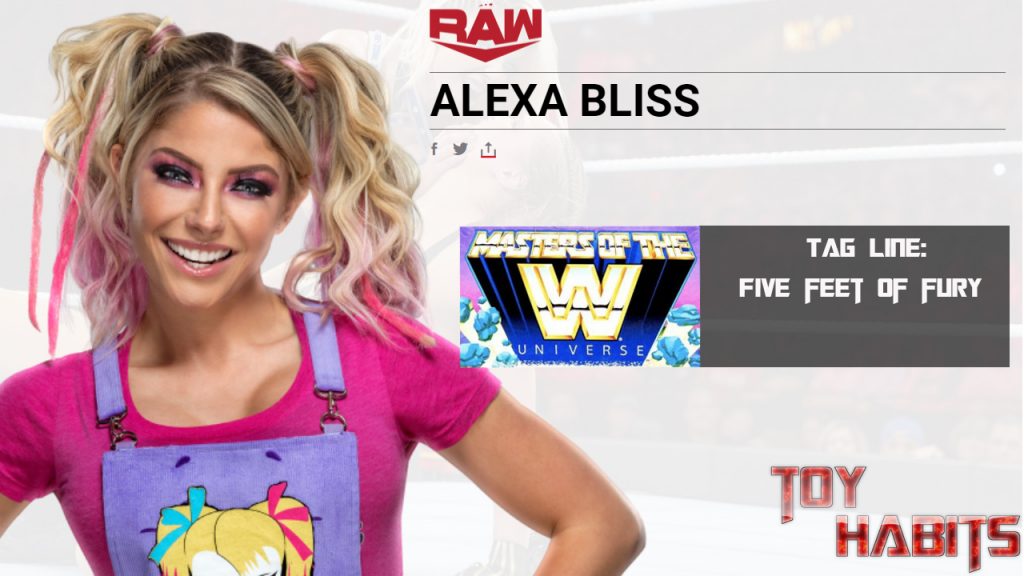 Number 5 on my list is Alexa Bliss. I feel that her current incarnation of herself as well as her partnership with The Fiend would make an amazing pairing that I would welcome into WWEternia. There is lot of fury packed into her small frame so I feel like her tagline could read Five Feet of Fury.” I have seen a great figure for Bliss thus far but I would love to see her current Alexa’s Playhouse persona for the concept for her WWE Universe figure. 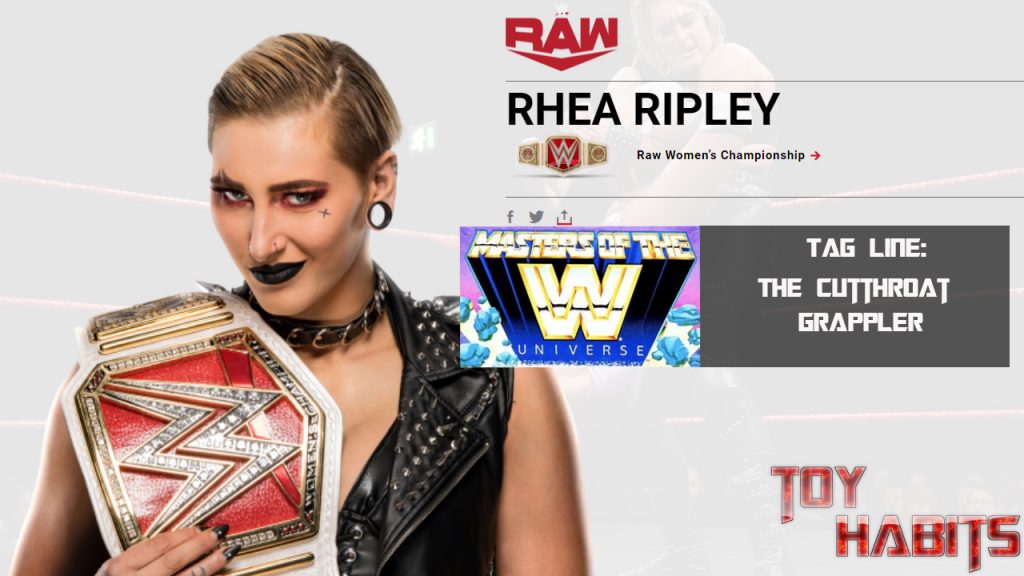 Number 6 on my list is Rhea Ripley. The ultra-aggressive and terrifyingly strong Aussie can  stand stand toe-to-toe with any Superstar in WWEternia. She is the current RAW women’s champion and I feel like we need that belt in the line. She is an amazing technical wrestler and I feel like she could could start a Horde Faction. Her technical abilities and brute strength are 2nd to none and her tagline could read The cutthroat grappler. There is a lot one could with her concept…she has an outfit that reminds of the tag team demolition and it would be very cool to see her in the Horde! 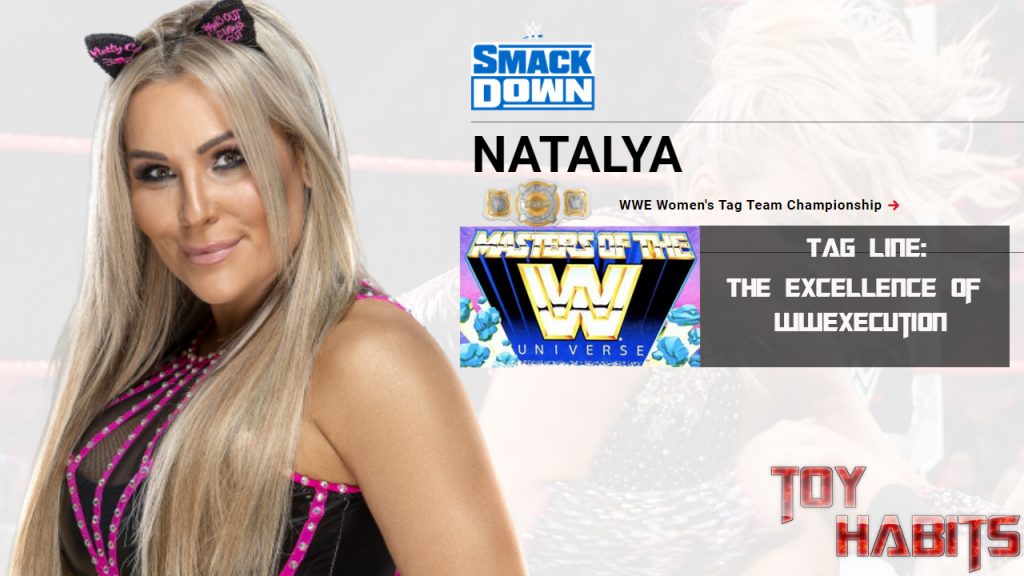 Tagline: The Excellence of WWExcution

Number 7 on my list is Natalya! With a combination of talent and untamed desire, Natalya is proudly carrying on the legacy of the legendary Hart Family in the WWE. AS the Daughter of the legend Jim the Anvil Neidhart, Natalia would make an amazing addition to the line. Being the strong technical wrestler she is, Natalya’s tagline could read The Excellence of WWexection. I’ve always been impressed with Natalya’s ring attire so there is a lot you could do with her concept, which includes removable ring attire and those cute cat ears that she always gives away to a fan at rigside. Come to think of it, she would make an amazing Catra figure in the WWEternia 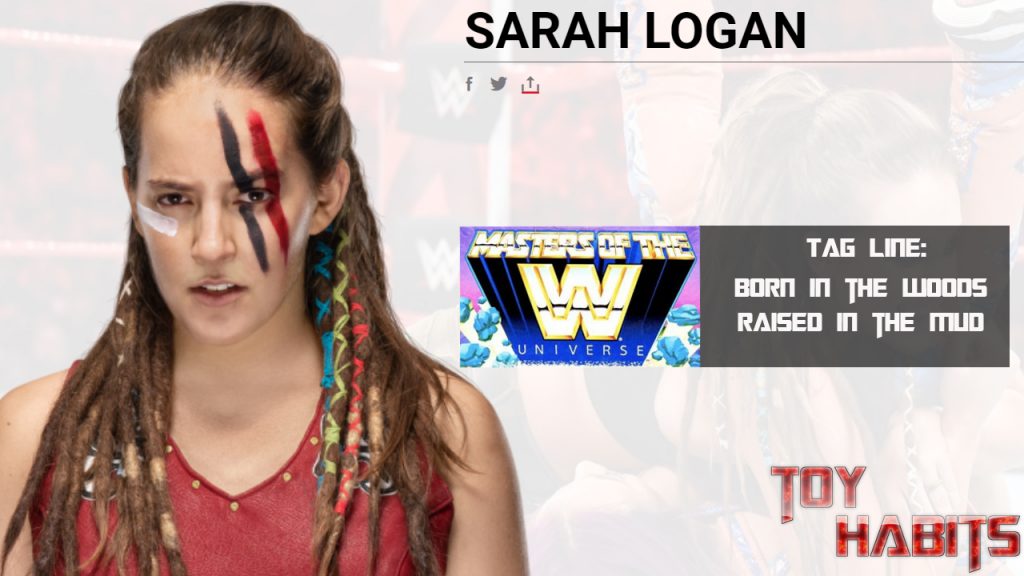 Tagline: Born in the woods and raised in the mud

Number 8 on my list is Sara Logan. Now Sara Logan is brutal and she looks very beast-like. I feel like she could take on the Monster Among Men Braun Strowman and she could hold her own in WWeternia. Given her raw and rough look, her tagline could read born in the woods and raised in the mud. The concept for Logan’s WWEternia figure could have her wearing beast like armor with lots of face paint detail. 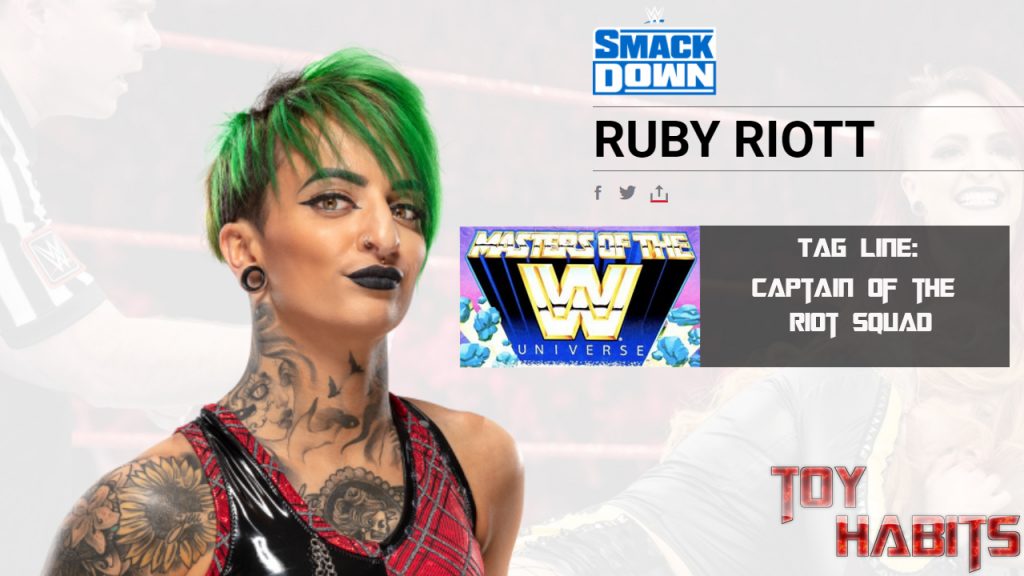 Tagline: Captain of the Riot Squad

The inked-up Superstar comes from a world of punk rockers and rebels and people who stand up for what they believe in at all costs.. Given that Ruby Riot is the founding member of the Riot Squad, her tagline could introduce a new faction into WWEternia. There are many different ways you go with her figure concept so including those tattoos is a must along with her versatile ring attire. 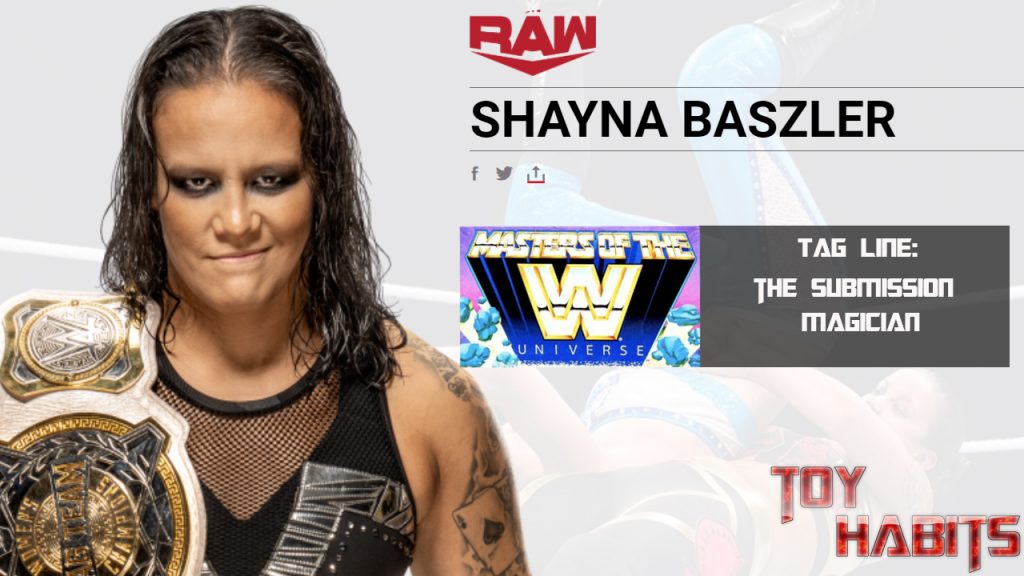 And last but certainly not least…number 10 on the list…Shayna Baszler! Baszler is also called The Queen of Spades and is one of the true pioneers of women’s MMA…She chose to apply her martial craft to the squared circle, and her skills translated quickly. Capturing the NXT Women’s Championship on two separate occasions, she still holds the record for total days spent as NXT Women’s Champion and could definitely be a powerhouse in Steph’s army. Submission moves are the name of her game so her tagline should be The Submission Magician. For the concept of this figure…I see the Spade detail playing a large part in her deco and there must be something we could do in the line with the towel she always wears around her neck, which could be turned into a weapon or accessory.