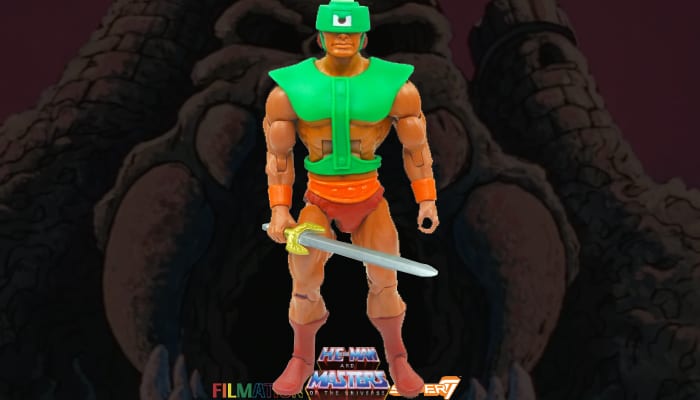 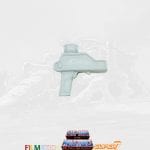 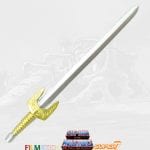 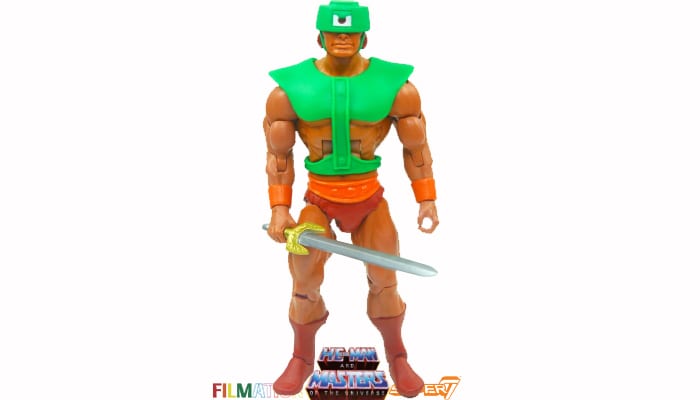 Tri-Klops action figure from the Filmation Super7 Masters of the Universe toy line. The figure itself does an excellent job at capturing the classic Tri-Klops we know and love. The skin tones match up really well between the cartoon and the figure as well as the boots, wrist guards, brown loan cloth and belt. The only deviation that I can see is the choice of green they used on the body armor and head sculpt. These parts use more a light green versus a dark forest green like how the animated version Tri-Klops was portrayed in the cartoon. Not that the figures need to directly match up, the light green compliments the skin tones as well as the other colors that were selected for the figure. This is also the first time the Tr-Klops head sculpt was made with a chin strap for his eye contraption he uses to flip between his visual acuteness when he is spying for Skeletor. Previous versions of Tri-Klops have omitted this detail but I am happy to see a figure that has included what might seem to be a minor detail in the figure but adds to the overall appeal. The scale of the eye helmet is perfect for the figure as previous versions of this figure featured a more chunky part to sit on his head. The way the eyes were cast and painted completes the look of the figure with his signature three-eyed look but with one oversight…the visor does not rotate so you are pretty much left with a head sculpt you can’t change. Maybe this was a design decision that traded off the overall look of the figure with a feature that has been a staple of all Tr-Klops figures in the past

Tri-Klops is one of the more subdued member’s of the Evil Warriors of Skeletor. Cunning and quiet, the three-eyed villain understands his master’s immense power and will often carry out his mission without question. On occasion Tri-Klops has sought association with Evil-Lyn, specifically during her attempts to usurp the rule of the Evil Lord of Destruction. Although Tri-Klops possesses great strength, his rotating visor secures his position and worth thanks to each individual eye granting him unique visual abilities. 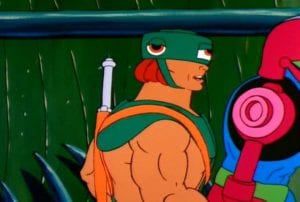 Tri-Klops appeared only rarely in the Filmation series and was portrayed as cunning, quiet, and reserved, without the typical humorous bumbling that characterized many of the Evil Warriors. Unlike in his minicomic appearance, his three eyes were different shapes. A square eye provided normal vision, a triangular eye provided Gammavision to see through solid objects and project energy blasts, and a circular eye provided Distavision to see over great distances. Tri-Klops worked best when teamed with Evil-Lyn, but unlike her, he was completely loyal to Skeletor and was very cautious about betraying his master. His greatest weakness came in the form of severe dizziness and blurred vision if his visor was spun by an adversary. 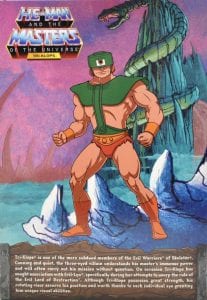