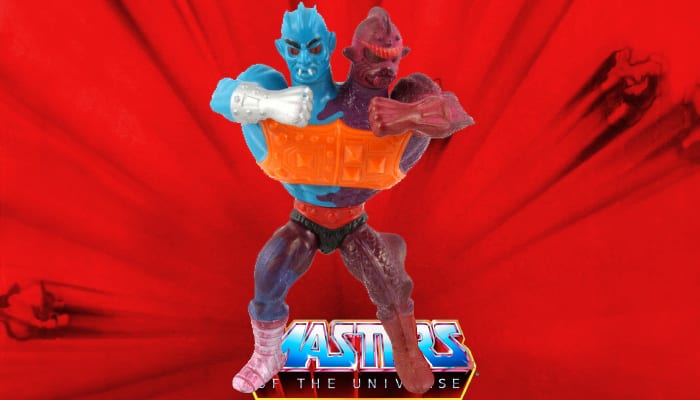 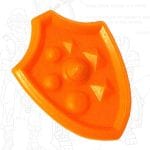 Who said two heads are better one? Well, in Two Bad’s case, no heads might be better than two as his heads have the habit of continuously arguing with one another to their determent. He looks like a Siamese experience gone wrong as the being is looked to be made up of two entirely different species.

Though the minicomics also portrayed the Evil Warrior Two Bad’s propensity for arguing with himself, they also depicted him as a mighty warrior and strategist. Two Bad’s appearance was quite monstrous. Both of his heads were hideous, and he had a purple half and a blue half. Although Two Bad’s argumentative nature sometimes led to his downfall, he was a powerful combatant and not to be taken lightly. 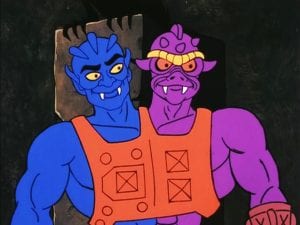 Two Bad’s pair of dull-witted heads argued with one another frequently in the Filmation MOTU series. His indecisiveness led to numerous mistakes which, in turn, led to Skeletor’s wrath. He did, however, seem to possess some skill piloting the Roton.

According to the Wiki Grayskull, Two-Bad is introduced into the Masters of the Universe toy line in 1985. Originally marketed as the “double-headed evil strategist” it is implied he is a master of strategy due to being two warriors in one, but his main trait in all story media is that his two heads have a habit of endlessly arguing with each other, meaning he has always generally been used for comic relief.

According to the toy line’s creator Roger Sweet, the concept of Two-Bad originated from the idea for a character who is two beings in one: one good, and the other bad. However, due to the marketing strategy of packaging each character as being part of one particular side, it was not possible to package a character as both good and evil so he was made a fully-fledged evil warrior instead. The idea of his heads not getting along prevailed however, and this idea seems to influence the design of his action figure, which had two spring-action arms aimed horizontally at one another. The figure’s arms could be sprung back and forth to create the impression of the heads fighting among themselves. The design was “officially” to let Two-Bad “bear hug” enemies; it has never really been clear whether the character was designed to hit the opposing head or if this was just a coincidence of design. The original figure had a very thick upper body making him top heavy and hard to fit into vehicles. Later versions had a flat back, making the character lighter and easier to sit in vehicles.